I survived the Pitt-Aniston travesty

Take it from one who was there: Brad and Jennifer's wedding made one of Caligula's decadent bacchanals look like a bingo party. 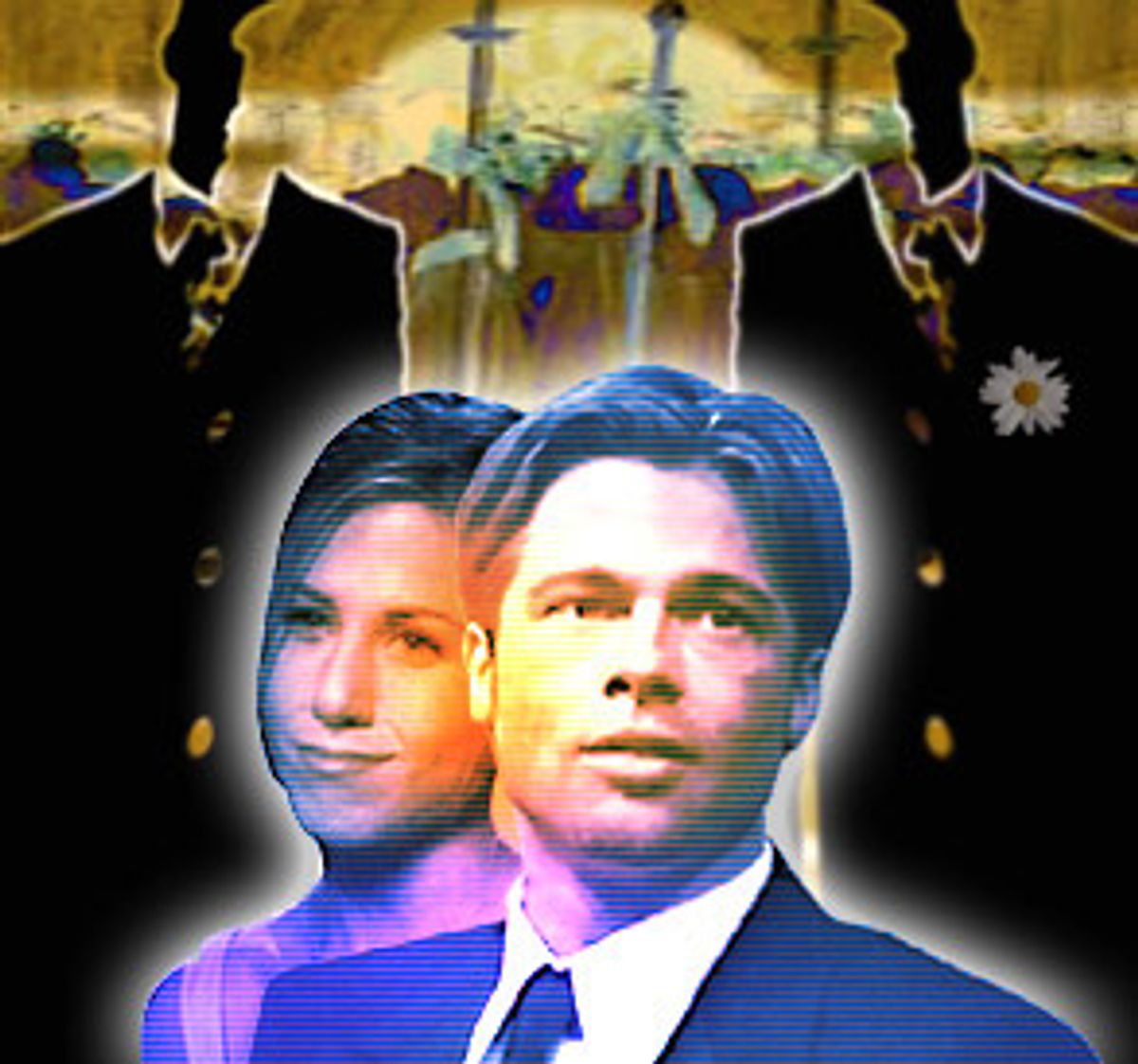 Naturally, I was one of the first to arrive. The security team, anonymous in aluminum helmets, frisked me. They checked my body cavities, they checked the cavities in my teeth for hidden cameras. With the help of my attorney, I signed the 37-page release form. Then I was processed through the decontaminator and given a round of Breathalyzer and infectious disease tests.

While I waited for the results in one of the ante-tents, films reminiscent of anti-abortion propaganda were shown to a few of us: examples of what would happen to our bodies if we spoke to the magazines about what we were about to see. One girl vomited and began weeping; she begged to be released.

"There were no watermarks on her invite," said one of the security helmets who was holding an infrared authorization-gun. Nobody wanted to know what would happen to counterfeiters, once inside the tent. After being given a mild round of antibiotics by the medics for a minor sinus infection I didn't know I had, the leather hood was thrown over my head and I was guided into the Cavern of Festivities, located, we guessed, in an underground shaft, beneath the big white tent.

Everyone over 50, whether they looked it or not, (and most of them didn't) were kept in a separate tent. There were tables featuring goblets of opalescent, tiny plastic capsules of prohibitively expensive under-eye cream. Waiters crushed Viagra into fine powder with mortars and pestles and sifted it into the punch, a top-shelf milange of pure white alcohols -- eau de vie, aquavit, grappa -- kept steamy-cold with a reign-of-Napoleon, triumphal equestrian ice sculpture. Some of the women were already topless, comparing flawless artificial breast textures.

The crucifixes were burning in the primitive Conquistador-era church Brad Pitt had transported stone by stone from the Yucatan Peninsula and reassembled. Incredible Eastern European prostitutes, naked except for thin white muslin robes, were "vestal virgins," guiding guests to their pews, French-kissing strangers as they sat down.

Brad descended from the rafters in a blaze of singing light, which turned out to be a golden birdcage woven with fiber-optic cables. An Anglican boys choir filled the cavern with haunting falsetto harmonies. Our skins shivered at the spectacle, especially when bubbles began pouring out of the mouth of Christ.

Aniston emerged and rode down the aisle on an albino ocelot that had been declawed and groomed by Frederick Fekkai for the occasion, wearing a Tang dynasty headdress, elaborately hennaed feet and Harry Winston nipple clamps. During the nondenominational ceremony, crisp, new money in large denominations poured from the top of the tent. Beautiful, sleek women laughed and chewed the bills like gum with their large and perfect teeth.

Once the rings were on the fingers, a plasma storm electrically cracked into purple veins above us in the rafters. A huge bass line thumped; the altar tore into sections and a large, tropical Busby Berkeley production number rose from the floor; soon, all was Cuban drums, potted palms and 19-year-old breasts. Demure, older women shrieked away the last of their inhibitions.

The entire buffet set up was absolutely tasteless; a perverse example of what people with too much money and no taste will do: the dwarf Negroes in powdered wigs, the quail within a chicken within a turkey within a pig within a boar within a moose within a polar bear, being turned slowly on the spit by Playboy bunnies, squealing in pain every time sparks of grease popped onto their skin.

The teens and young adults, the Comestibles, were all in the ballroom, naked except for body paint and lengths of silken twine and jewelry. Rock-hard abs sweated up against harder rock-hard abs. Human flesh was sampled, as a whim, on water crackers -- just enough for a taste. "Orphanage luau," explained one of the cooks, who agreed to be temporarily blinded for the occasion. It was piggy and overdone; too much rosemary. "You want to taste the gaminess. I don't like babies, too much fat. I only eat adolescents. They're stringier," said a man wearing nothing but a woman's silk-velvet cape and a small wig on his erect penis.

Brad Pitt began the fistfights. Everyone wanted a piece of the abuse. The drums filled the cave, rising in a maddening crescendo above the screaming. Several actresses claimed to be "possessed."

We all killed a large Nubian ibex with our bare hands. It had been released, confused, into the midst of the dance floor. In a fury of euphoria, we ate its entrails. I was knocked unconscious by a flying Manolo Blahnik pump, awaking minutes later with blood down the front of my gown like a black bib. Men in cardinal costumes were chasing naked boys who were crawling on the wreckage of the floor on all fours, laughing.

There was a meltdown. People rejoiced, thinking it was only part of the video. Several black Mercedes sedans were overturned and burning, tiny cubes of safety glass covered the walkway like an ice mosaic. Two large birds, a California condor and a blue heron, were released into the sky. As predicted, the condor grabbed the heron and tore into its neck with a piercing cry. Everyone laughed; an allegory of the marriage. The condor took the heron corpse up toward infinity; both birds seemed to explode with the first of the stunning pyrotechnics. Everyone knew that Brad and Jenny would live happily ever after.