Michael Chernuchin, the creator of "Bull," talks about bringing TNT's first-ever dramatic series to the screen. 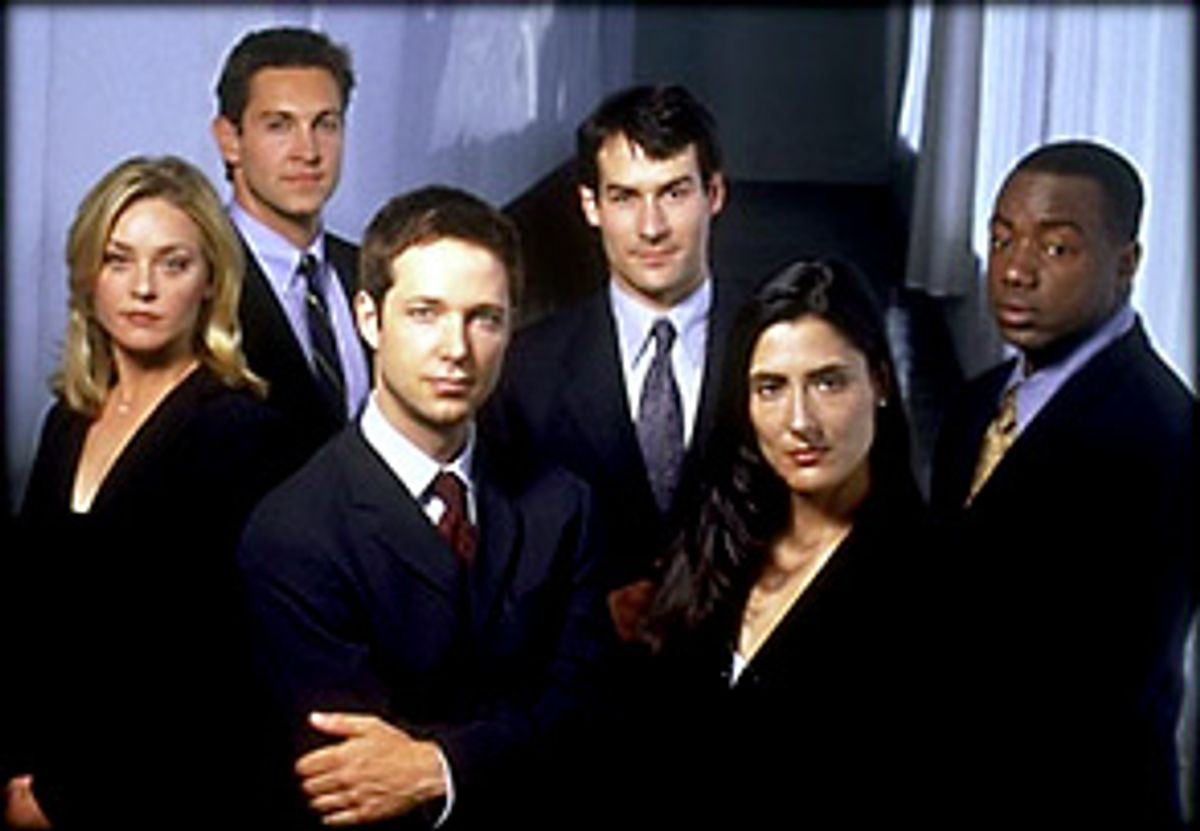 "Look for two tall blonds." So say the TNT publicists -- frenzied over the launch of the network's first-ever dramatic series, "Bull" -- to a reporter coming to Central Park to meet show creator Michael Chernuchin.

Stanley Tucci, blue power-suited to play Wall Street powerbroker Hunter Lasky, is discussing the scene to be shot, as tall-drink-of-water costar Elisabeth Rohm agrees and absorbs. It's a gorgeous summer day, the TNT people (who are indeed tall and blond) are in their element, the cast seems genuinely excited about the show, and even executive producer Ken Horton, who must be agitated about the cost of shooting a scene in the park, looks pleased as punch. For Chernuchin, who wrote many -- if not most -- of the best episodes on the best-written show on television, "Law & Order," this is a moment he's waited more than a decade to bring to life. Green talked to him about money, work and leaving a comfortable situation for a chance at a dream.

We're 15 years into the strongest bull market this country's ever known. What took so long for a show to materialize?

I've been pitching this idea since 1990. 'What about a show about Wall Street?' I'd say to anyone who liked my ["Law & Order"] episodes enough to approach about developing my own show. 'No one cares about Wall Street,' they'd say, even as the country increasingly obsessed over their investments. Finally, somebody listened. TNT decided Wall Street is interesting. We premiere on Tuesday, August 15.

TNT is kind of a strange choice -- I think of them as Goldberg and Clint Eastwood movies.

Their original marching orders were 'Let's do something you can't do on national broadcast television.' We don't have to appeal to the lowest common denominator. These characters are flawed people. They have ambitions other than what you see on television. We're their first original series. Their forte is marketing, and I think they are committed to this show's success.

You were a lawyer before you split for Hollywood to try to make it as a writer. What's the attraction of Wall Street as a subject?

Calvin Coolidge said the business of America is business. Honestly, how often do Americans have contact with a policeman? Or a lawyer? Twice -- when they write a will and buy a house. Donald Trump and the guys on "Squawk Box" are celebrities.

You wrote the "Law & Order" episode where a Joseph Jett kind of character kills his boss and attributes the act to black rage, so Wall Street was already on your mind as a dramatic venue.

One of the characters in "Bull" is played by Malik Yoba ("New York Undercover") -- his character has never suffered any discrimination at all and all of a sudden on Wall Street he's feeling it. This is America's pastime. Where it used to be a cabby's [reading] the New York Post, now it's equally often Barron's. We've done an episode about the dangers of day trading and this stuff is riveting. We'll draw from real life, and we have a lot more character stuff. The basic premise is five or six young Turks at a big firm split off to start their own firm. Business, per se, may not be interesting to everybody. It's the personalities of business.

Most of the lawyers I've known are very detail-oriented, not risk-takers. What did it take to drop that and move to Los Angeles to pursue a dicey career trajectory?

I was at a big firm [Proskauer Rose] and just like in my show, four of us split off. After a while, I was scared. My graduate degree was in English. All of a sudden, my friends were graduating from law school and medical school and business school, and I could see myself drafting briefs for 50 years. I packed my bags and moved to Hollywood. I was 34 or 35. I landed May 2, 1990, and 30 days later I got my first job -- on "Law & Order." Dick Wolf. I love him. Dick is Dick. He's a mogul. I owe him a lot. First day of shooting "Bull," I got a nice bottle of champagne from him. I always say Dick pulled me out of the gutter.

You must have been making a lot of money ...

I don't want to talk numbers. I was a partner in a law firm. I had to pay a lot to get out of the lease. I came out here with nothing but my golf bag. That's what the show is about. These young kids want to do it on their own -- there's something inside each one of them. America's not about Mom, it's not about apple pie, it's about ownership.

I noticed that most of the crew is sitting on chairs that say "Law & Order."

See, that's what I mean. Dick's show is on hiatus and he's letting us use some of his stuff and people.

But wasn't he upset when you left "Law & Order?"

I wrote a ton of episodes. I did the first six years, killed off Jill Hennessy and then it was time to go.

One of them would be "Discord," where a rock star (Clarence 'C Square' Carmichael, mesmerizingly portrayed by Sebastian Roche) rapes a college student but claims it was consensual sex. [Breaks into song he wrote for the episode]: 'You ain't a lady, you my bitch.'

Back when I was a lawyer, I played a lot. Margin in way over my head. I learned my lesson in 1987 with a bunch of margin calls. Now I let a professional do it. My whole focus is getting this show going and on the air. I haven't played at all. I wish someone would come and give me a hot tip.

Apparently, Jonathan Alter of Newsweek was doing his best to ingratiate himself with Oliver Platt and the people doing Dick Wolf's new show "Deadline" -- he generously offered to weigh in on whether the scenes rang true to actual newsrooms.

We have professional investors to bounce stuff off of now, but on the pilot I didn't. The pros said, 'Who helped you on that?' I have a writing staff now, but I wrote the first three or four [scripts]. Then I redo or rework -- everything ultimately goes through MY computer. No one's complained to me yet.

I have a movie with Kevin Costner -- he hired me to write it and we'll see what happens. But right now the focus is "Bull."

So what do you think now that it's real? We're here in Central Park and even your executive producer looks pleased.

I look at the cuts of the first couple of shows and I'm proud of what we did. Television is a crapshoot -- who's up against you, time slot, etc. The best stuff doesn't always turn into a hit. But this I'm very, very proud of. I read that 50 percent of all Americans own stock -- phenomenal, incredible. It gives them an interest and that's why I think the show has a shot.

Ken Kurson is editor of GreenMagazine.com. Author of "The Green Magazine Guide to Personal Finance: A No B.S. Book for Your Twenties and Thirties," Kurson has also written for Worth, Esquire, the New York Times and other publications.