The militarization of police strategies on display this convention season has cops fighting demonstrators, not crime. 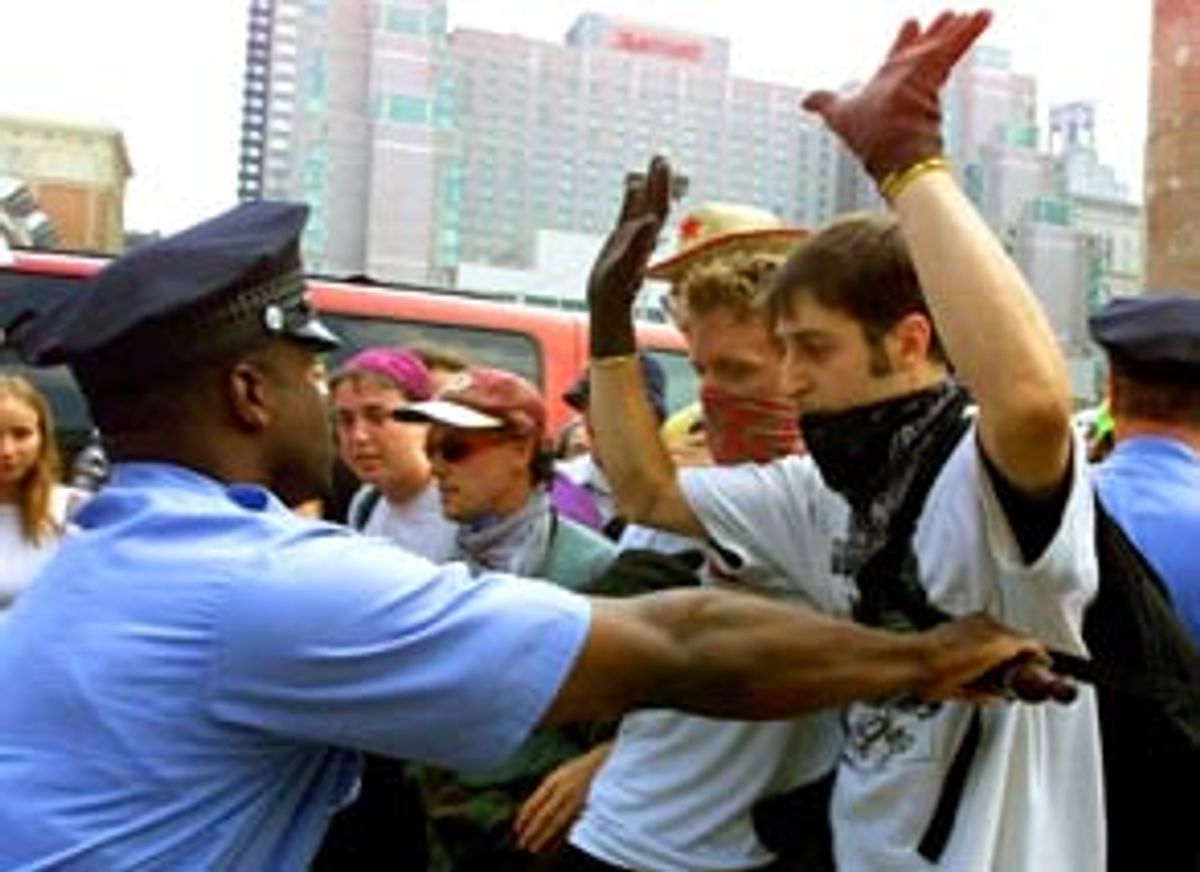 The Democratic Convention may be taking the national stage this week, but those of us who live in Los Angeles have been hearing nervous hiccups about it for months. The local authorities, citing fears of riots, have tried, unsuccessfully, to confine the demonstrations to a tiny, distant protest zone. They have apparently been spying on the protesters' headquarters. And if things get ugly, there's been talk of bringing in the National Guard.

Smashed storefronts and flying rocks are bad things. But while the cops and Democrats warn of riots, a lot of us have started wondering if we shouldn't be even more afraid of repression -- especially in light of what some are saying happened at the Republican Convention in Philadelphia.

Marc Brandl of Washington attended those protests as an observer, not a marcher. In fact, he hoped to engage the marchers in debate. A devotee of free markets, Brandl had little sympathy with the causes represented in the Philadelphia streets. (I'm not wild for all of them myself.) There was a lot of vandalism on Tuesday of that week, he notes, almost all of it aimed at government property, and some demonstrators attacked some cops as well. That Tuesday was also the day most of the arrests were made.

But that doesn't mean the arrests matched the crimes. "Most of the people who committed the actual property damage and assaults on police officers, from my observation, got away with it," Brandl says. "The people they arrested -- it seemed it was random."

It might be worse than that. More than a week after the GOP closed its convention doors, ugly reports of police misconduct toward protesters are still trickling in. Imprisoned demonstrators have claimed that they were dragged, hogtied, beaten and denied medication for serious illnesses. One arrestee reports that a guard grabbed and wrenched his penis. The local authorities deny all those reports, and most of the allegations not been confirmed -- though some non-protesters caught in the dragnet have reported mistreatment as well, strongly suggesting that more than politically motivated exaggeration is at play. Human-rights groups are probing the prisoners' charges to sort the real crimes from the rumors.

One injustice is undeniable, though. When John Sellers of Berkeley, Calif., chief of the Ruckus Society, was arrested for a collection of misdemeanors -- which he denies committing -- his bail was set at an astonishing $1 million. Though a second judge later reduced the bail to $100,000, it's still hard to square that with the Eighth Amendment admonition that "excessive bail shall not be required."

Why was Sellers' surety set so high? He thinks it was to prevent him from protesting at the Democratic Convention this week. If that is so, the judges who set his bail are guilty of preventative detention, a policy most people associate with backwater military fiefdoms, not U.S. cities.

But then, many U.S. cities have been militarizing their police forces recently, with the feds' enthusiastic support. The number of paramilitary police units has taken off in the last 10 years, as has, naturally, the number of times they've been deployed. This has brought about an insidious change in police thinking, outside of the special units as well as within them. When you see yourself as part of a military force, you stop thinking in terms of individual crimes and start thinking in terms of containment.

The results were on international display last fall, with the Seattle cops' disastrous response to the protests at the WTO summit. There, officers were told to control a crowd, not to prevent actual wrongdoing. When the protests began, police actually ignored lawbreakers -- even when the vandals were at work right across the street -- because stopping them would have meant breaking with the day's containment strategy. After the mayor decided to get tough, the cops clubbed and arrested people regardless of whether they were breaking the law. Individual wrongdoing was beside the point.

Judging from reports of "random" arrests, the Philadelphia police did the same thing.

The containment strategy is not in itself new. I was an undergraduate when the University of Michigan won the NCAA basketball championship in 1989, and along with hundreds of other students, I ran into the streets to celebrate. The crowd was rowdy that night, but most of us were well behaved: There was cheering, hugging, hand-slapping, and, at worst, a willingness to climb onto other people's cars. Then a few celebrants turned vandalistic, destroying store awnings, breaking windows and in at least one case attempting to steal from a store. The would-be looter was captured by a security guard, who dragged him to one of the many lawmen lining the streets. Here, said the guard, I caught this guy trying to rob a shop. Arrest him.

"I can't," the officer replied, and gestured toward the revelers. "I have to keep this crowd under control."

But what was merely a poor priority in Ann Arbor, Mich., was downright poisonous in Philadelphia. At the GOP Convention, police weren't afraid that a celebration would get out of hand. They were, by their account, afraid of a deliberate conspiracy to start a riot. That doesn't call for "crowd control"; it calls for crime control.

Yet even when individuals were targeted -- as with the arrest of Sellers, or the city cops' earlier raid on a meeting hall where protesters were preparing puppets -- the prevailing attitude was military. Soldiers might conspire to capture an enemy leader or to shut down the other side's headquarters. But peace officers are not soldiers, and demonstrators are not an enemy army. Under American law, the police have no business arresting someone unless he has committed, or is planning to commit, a crime.

The authorities, of course, claim that the arrestees are criminals: that the puppet-makers were really making weapons and that Sellers is a political Professor Moriarty (the fictional nemesis of Sherlock Holmes). But to judge from what they've publicly stated so far, they have little convincing evidence to bolster those charges. Until they can do better, we're left with tales of gross abuse and illegal detention, and the bitter aftertaste of autocracy.

Meanwhile, the L.A. police have praised the Philadelphia cops' "preemptive" tactics. If I were an L.A. shopkeeper, I'd think about hiring a private guard.

Jesse Walker is an associate editor of Reason Magazine.