Oozing charm, the charmer-in-chief thanks his fans and leaves a slippery path for Al Gore. 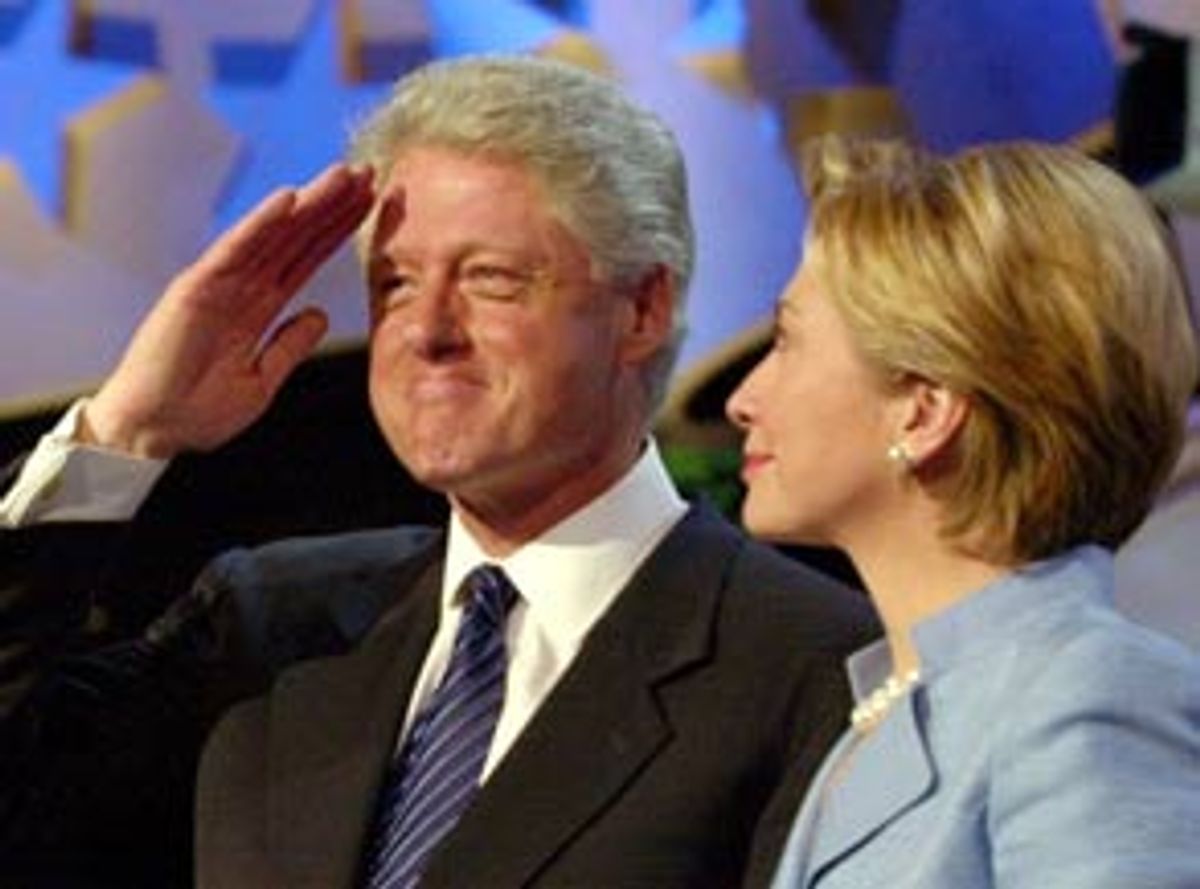 Amazingly, astoundingly, after President Clinton's Monday night kickoff speech to the Democratic National Convention, a Broadway troupe was whisked on stage to perform "76 Trombones," a number from "The Music Man."

Thus, President Clinton was followed on stage by Professor Harold Hill -- a snake-oil salesman, a con artist who charms an Iowa town into falling for his charismatic duplicity. By the musical's grand finale, Hill has so successfully wormed his way into the hearts of the good townsfolk that it didn't matter he had lied to them. Life was good, the town content and he, after all, was so darn charming.

After a series of speeches by Democratic women senators, and a competent-if-flat address by first lady Hillary Rodham Clinton, the president was first introduced in a biopic that highlighted his administration's greatest photo ops.

With complete superstar treatment, Clinton was introduced to the crowd like a prizefighter, oddly following a hand-held camera backstage through the arena's long, sterile-white hallways, making his way to the stage. When he finally appeared, he stopped briefly to shake some hands on the enormous stage, embracing only his chief fundraiser, Terry "the Macker" MacAuliffe.

With his honeysuckle charm, Clinton delivered a masterful oration, the crowd eating up his every "aw-shucks," reporters shaking their heads in a reluctant admiration for one of American history's greatest public speakers, one who inevitably reminds listeners that Al Gore is off-puttingly plastic, and Gov. George W. Bush seems, frankly, not quite ready for prime time.

"Eight years ago, when our party met in New York, it was a far different time for America," Clinton reminded the nation. "Our economy was in trouble, our society was divided, our political system was paralyzed. Ten million of our fellow citizens were out of work. Interest rates were high. The deficit was $290 billion and rising. After 12 years of Republican rule, the federal debt had quadrupled, imposing a crushing burden on our economy and on our children."

Then -- as is Democratic mantra, part mythos and part fact -- Clinton and his running mate, Al Gore (referred to as "one of the very best decisions of my life" by Clinton) -- launched their economic plan, which passed both houses of Congress with not one Republican vote, not even that of Clinton's now-secretary of defense, former Maine Sen. Bill Cohen.

"Not a single Republican supported it," Clinton said. "Their leaders said it would increase the deficit, kill jobs and give us a one-way ticket to recession.

"Time has not been kind to their predictions," Clinton dead-panned. "You remember our Republican friends said then they would not be held responsible for our economic policies. I hope the American people will take them at their word."

Making sure to praise both his wife and running mate, Clinton was at his most alive when he spoke of his administration's accomplishments -- slapping Bush phre and fils in the process -- and talking about, naturally, himself. Daddy Bush had vetoed the Family and Medical Leave Act, he said. "It's the first bill I signed."

Tens of millions of Americans have since been able to take unpaid leave to "care for a newborn child or a sick relative," Clinton said. "That's what it means -- that's what it really means to be pro-family."

He couldn't help himself. "We've given America the most diverse administration in history -- it really looks like America," he ad-libbed. "You know, if I could just get my administration up here it would be just as good a picture as anything you saw a couple weeks ago" at the Benetton ad otherwise known as the Republican National Convention.

A litany of achievements was savored. Foreign policy achievements. Improved SAT scores. Decreased crime. A Medicare trust fund extended for 26 years. And, of course, "the longest economic expansion in our history ... For the first time in decades, wages are rising at all income levels ... Harry Truman's old saying has never been more true: If you want to live like a Republican, you better vote for a Democrat."

"But we're not just better off," Clinton said. "We're also a better country. We are today more tolerant, more decent, more humane and more united." In another Bush-slap, he joked, "now that's the purpose of prosperity."

He took a few moments to assure Americans about Gore. "I know him," he said. "He is a profoundly good man. And lemme tell you something else about him: More than anybody else I've known in public life, Al Gore understands the future and how sweeping changes and scientific breakthroughs will affect ordinary Americans' daily lives."

"We should posit that our opponents are good, honorable, and patriotic people -- but there are also differences." The differences are, according to Clinton, that Gore -- while his own man, of course -- will continue the genius policies that Clinton has ushered in. "We should stick with what works," he said.

Bush, conversely, is the past, what doesn't work, promoting policies that will "spend every dime of our projected surplus -- and then some -- on big tax cuts."

Even worse, Clinton argued, Bush is Richard Nixon. After all, "the last time we had an expansion this long was in the 1960s." In 1964, Clinton said, "I assumed, like most Americans, that our economy was on automatic -- nothing could derail it ... So we took it for granted." Then Nixon got elected and "within months after that election, the last longest economic expansion in history was, itself, history."

"You know how I feel" about the race, Clinton said. "But it's not my decision to make. That belongs to the American people."

Winding down, Clinton said that "54 years ago this week" -- somebody's got a birthday coming up! -- "I was born in a summer storm to a young widow in a small Southern town. America gave me the chance to live my dreams and I have tried -- as hard as I knew how -- to give you a better chance to live yours ... The future of our country is now in your hands ..."

"And remember, whatever you think about me" -- Clinton said, in his only even remote acknowledgement of the Monica-cophony -- "keep putting people first. Keeping building those bridges.