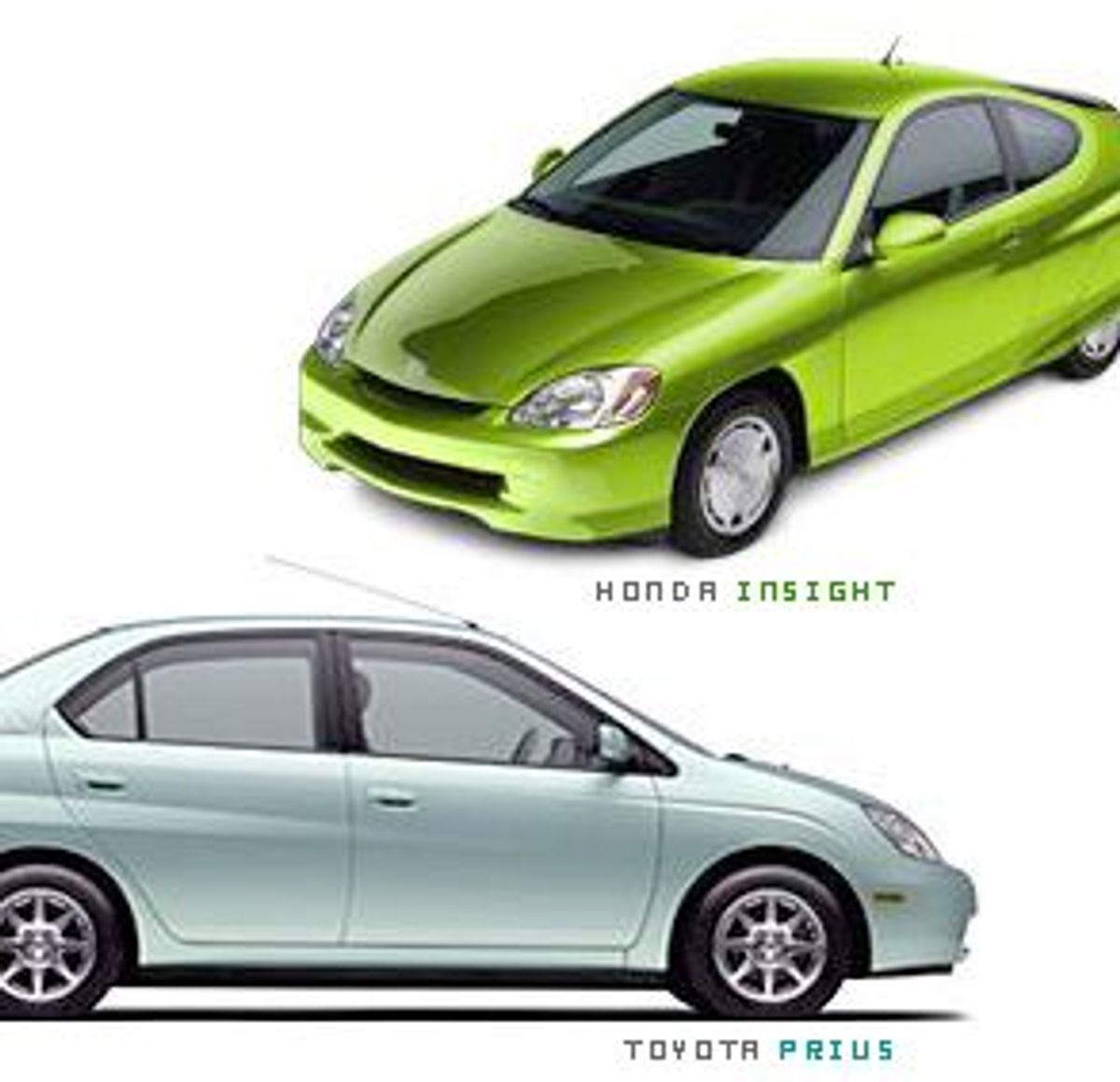 On a hot Los Angeles afternoon when the sky is a dreary brown (yes, smog still blankets the City of Angels), any solution to the discomfort caused by the twin evils of pollution and excessive fuel consumption amounts to paradise.

But at what price for paradise? Car manufacturers already have agreed to sell "zero-emission" (e.g., electric) vehicles in California by 2003. But the limited driving range of these cars, long battery recharge and huge cost of replacing battery packs ($22,000 per car) make the cars unfeasible. Hope now rides with fuel-celled cars, which are essentially pollution-free and extremely fuel-efficient. Major U.S. manufacturers already have begun developing cars using this technology, but their lineups won't appear in dealer showrooms for at least a decade. At the moment, the latest advances aimed at easing drivers' breathing woes and pump-side pains center on "hybrid" cars, such as Honda's Insight and Toyota's Prius.

Earlier this month, General Motors also entered the "green" race, saying it will begin producing hybrid versions of its full-size pickup trucks and buses. That followed Ford Motor's announcement that it plans to improve the fuel economy of its sport utility vehicles by 25 percent during the next five years. Ford, however, seemed less sincere about saving the environment when it said its next generation of Ford Explorers -- the industry's top-selling SUV -- would be larger and have a more powerful engine.

By no means will hybrids -- which combine traditional internal-combustion engines with electric motors -- turn L.A.'s skies blue. (Angelenos may never rid themselves of their not-so-lovely smog problem.) But Japan's top two automakers are betting a market exists for these vehicles, engineered for minimal exhaust emissions and maximum fuel economy. Honda initially anticipated selling a modest 4,000 Insights per year, but revised its estimate to the bit less modest 6,500. Toyota, which recorded more than 850 Prius orders during the first four hours after the car went on sale, counts on selling 12,000 cars this year. (GM wouldn't say how many hybrid pickups it plans to sell.)

It's true. Insight and Prius buyers will see phenomenal gas mileage figures. (Seventy-one mpg in highway driving for the Insight and 45 for the Prius.) But it'll cost them about $20,000 for either car, which is quite a lot for a two-seater (Insight) or a four-passenger economy sedan in the Ford Focus mold (Prius).

The thinking, however, is that pioneers have to make sacrifices.

But just who will these pioneers be?

Industry analysts and carmakers expect the initial group to be environmentalists, as well as those who want to be first in line for almost any trendsetting car. But then the hard part comes -- persuading the masses to hop into a hybrid. The key, analysts say, is allowing consumers to make a seamless transition to the green version of their favorite cars. Honda plans to unveil a hybrid version of its popular Civic in 2002, the same year Ford introduces a hybrid Escape, its compact SUV. Toyota also has plans to expand its hybrid line.

A proliferation of hybrids on the roads could convince the public that a hybrid really does look and drive like an ordinary car. But because they paid a premium (Toyota estimates that hybrid buyers initially will pay $6,000 more than they would if they bought a traditional car), they'll probably expect a lot more than they would from an ordinary set of wheels. However, tax incentives for hybrid buyers, now in place in Connecticut and being considered by lawmakers in Massachusetts, Virginia, Louisiana and New York, may ease some of the sticker shock.

Even with the somewhat elevated prices, Toyota is likely to lose a little money on each Prius it sells. Honda isn't making a similar estimate of profitability on its Insight, and for good reason. Industry insiders believe Honda will lose a bundle on each Insight because it's clearly the more exotic of the two hybrids, making use of expensive lightweight construction and mechanical components not used on any other Honda. Insights are built in the same labor-intensive assembly facility that turns out the Acura NSX sports car.

Ultimately, Toyota expects to make money on the Prius, making it willing to take a loss now to establish the vehicle in the marketplace. And Honda is using the Insight as a launching product to make even better -- and greener -- cars, which could make the cash register ring.

But Eric Noble of the Car Lab, an industry consulting firm in Santa Ana, Calif., sees a problem for hybrid manufacturers. "Under current North American conditions, people aren't willing to pay more just for better fuel economy -- gas is too cheap." Manufacturers, according to Noble, are betting on future fuel price or supply shocks to make hybrids acceptable. Even so, the point where hybrids gain acceptance on their own will probably occur, Noble says, when a manufacturer "makes a conscious decision to sacrifice some of the hybrid's fuel efficiency gains for an increase in performance. Fuel economy is not exciting in today's market; performance is."

Aside from the high cost, the government also hasn't yet embraced hybrids -- since it's keener on promoting electric cars. The California Air Resources Board, for one, has demanded that 10 percent of all new cars sold in the state starting in 2003 be "zero-emission vehicles." The agency will credit Toyota for the Prius (counting every three sold as being equivalent to one electric vehicle), but the Insight, with its slightly dirtier exhaust, gets no such consideration.

Analysts believe California will be forced to back away from its stringent demands, since there's no evidence there's a big demand for electric cars, aside from that by golf course owners and the government. In the end, customers will dictate what cars will be on the road. And at the moment, hybrids seem the most likely compromise between finicky drivers and environmental woes.

Ray Thursby is a freelance writer who writes about the auto industry.