A groundbreaking study says they can and do, helping acupuncture inch toward Western acceptance. 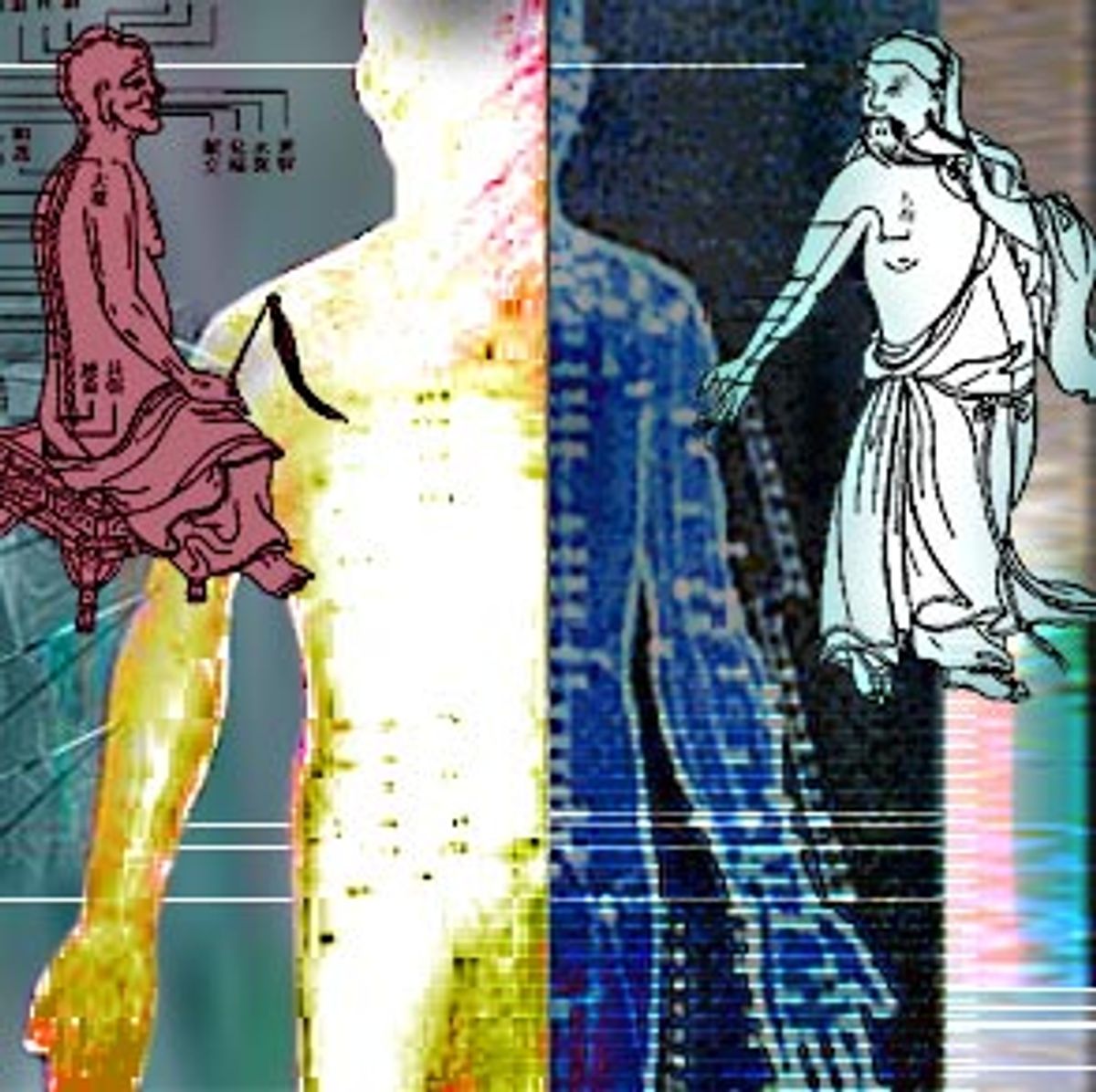 "I never would have done this had I not wanted my kids back," confides former crack addict Valerie Wilkerson, "But it was my last chance."

A lot of addicts have come to that turning point where they must change their lives or lose everything they care about. But the problem was that Wilkerson had been there before. Again and again. Despite the birth of six children whom she loved, and repeated attempts to commit herself to rehab, she never was able to stop. She'd been addicted to crack since she was a teenager and she'd just about resigned herself to a miserable fate.

But when New York child welfare authorities seized her children and placed them in foster homes, the 36-year-old decided to try one last time to escape the drug that had destroyed her life.

"I went to court," she explains, "and they told me the only way I could get my kids back was to stop using. They gave me a list of rehab programs, including the acupuncture program at Lincoln Hospital, which sounded good to me. At Lincoln, they put the little needles in my ears. I had no drug cravings. It was amazing. I've been off drugs for two years now. I have a good job, and I got my kids back."

Long a poster child for the damning effects of drug addiction, she suddenly found herself being upheld as a different kind of role model: living proof that a needle treatment could help even the most chronic crack addict. In her new job she does outreach to crack users, telling them her story and giving them information about Lincoln's acupuncture treatment.

This week, with the publication of a study in the Archives of Internal Medicine, Wilkerson may have some powerful ammunition in the battle against crack addiction.

Acupuncture began to be used in addiction treatment in the United States at Lincoln and a few other places in the mid-1970s. Over the past 25 years, the number of facilities has grown steadily and is now estimated to be several hundred. But some doctors have continued to reject the ancient Chinese needle therapy because findings have been contradictory. Some studies show significant benefits; others show none at all. But this study, conducted by Yale researchers, seems destined to bring acupuncture closer to the medical mainstream. The largest and most scientifically rigorous to date, the study shows that acupuncture can be highly effective in treating cocaine addiction, in conjunction with a comprehensive treatment program.

This new study comes at a time when the Western disregard for this Eastern treatment is finally giving way. A growing group of studies suggests that acupuncture is effective for many conditions: from hives to fibromyalgia, from back pain to PMS. Even the National Institutes of Health recently endorsed incorporating the ancient needle therapy into mainstream medicine.

"This study provides further validation for what many of us in drug rehabilitation have been doing for many years," says Michael Smith, director of the substance abuse rehabilitation program at Lincoln Hospital and developer of the treatment procedure used in the new study.

"There aren't many other effective treatments for cocaine addiction," says Arthur Margolin, Ph.D., a research scientist in Yale's department of psychiatry and the new study's principal investigator. "In addition to its effectiveness, acupuncture is a low-cost treatment and has few, if any, side effects."

"In my experience," explains, "acupuncture not only minimizes cravings and withdrawal discomforts, but it also has longer-term benefits. People who get acupuncture tend to stay in treatment longer, and as a result are less likely to return to drug use."

The new study involved 82 heroin and cocaine addicts. They received methadone to treat their heroin addiction, plus counseling. In addition, they were all assigned to one of three experimental groups. Some received true acupuncture, needles into four classic points in the ears. Others received sham acupuncture, an equal number of needles inserted into non-acupuncture spots around the ears. And some viewed relaxing nature videos.

Participants received treatments five times a week for eight weeks. Each treatment lasted 45 minutes. They submitted urine samples three times a week that were analyzed for the presence of cocaine.

By the end of the study, the group receiving true acupuncture had the most cocaine-free urine samples -- 54.8 percent -- compared with 23.5 percent in the sham acupuncture group and just 9.1 percent in the relaxation video group.

"Not everyone with an addiction problem responds to acupuncture, but many do," says Patricia Culliton, an acupuncturist with the alternative medicine division of the Hennepin County Medical Center in Minneapolis who participated in some of the earliest studies of the needle therapy as an addiction treatment more than 10 years ago. "We've had good results with men and women of all ages, races, ethnicities and drugs: alcohol, cocaine, heroin, methamphetamine and prescription drugs such as Valium. And compared with other treatments, acupuncture is very safe and inexpensive."

Use of acupuncture in addiction treatment began serendipitously in the early 1970s, when H.L. Wen, M.D., a neurosurgeon in Hong Kong, used the needle therapy to treat postoperative pain in a man who also happened to be withdrawing from heroin. He noticed that the man's withdrawal symptoms had disappeared. Wen subsequently began treating narcotic addiction with acupuncture, and reports of his success reached Smith at Lincoln Hospital, who adopted the approach in the mid-1970s. Since then, it has spread to hundreds of drug-rehab programs around the world.

"It's not clear why acupuncture helps treat addiction," says Smith. "The usual explanation, shown in several studies, is that it releases endorphins, the body's own pain-relieving compounds. I believe that endorphins are involved, but that they're only part of the story. Acupuncture's effects are more complex. Most of our patients say it relaxes them, but some say it makes them more alert. I come back to the Chinese view that addiction is an imbalance in the body, and that acupuncture helps restore balance."

"Acupuncture research is still in its infancy," Culliton says, "so we don't really know how it works. In addition to releasing endorphins, it also changes levels of hormones and liver enzymes. It's complicated. Personally, I believe that it boosts the body's innate ability to heal."

Chinese-Americans have used acupuncture since the first Chinese immigrants arrived in this country. But the needle therapy was unknown to most non-Asian Americans until 1971 when Richard Nixon became the first U.S. president to visit the People's Republic of China. During that visit, TV news programs broadcast astonishing footage of people having major surgery while fully conscious -- their only anesthesia being a few acupuncture needles. New York Times columnist James Reston accompanied Nixon and witnessed acupuncture anesthesia firsthand. As fate would have it, Reston needed an emergency appendectomy while in China. He decided to try acupuncture instead of narcotics to control his postsurgical pain. It worked, and Reston's praise for the needle therapy spurred tremendous interest in acupuncture.

The origins of acupuncture are lost to history, but legend has it that an ancient Chinese soldier suffered an illness his physicians could not cure. In battle, he was hit by an arrow, receiving a superficial wound. The wound healed, and oddly, so did his illness. Intrigued, Chinese physicians began recording the places -- or "points" -- around the body where stabbing wounds produced improbable healing. Their observations led to acupuncture and its offshoots: acupressure (which uses finger pressure instead of needles), shiatsu (Japanese massage on acupuncture points) and reflexology (acupressure massage of the feet or hands).

Chinese medicine postulates that acupuncture works by restoring healthy circulation of qi (pronounced "chee"), humans' invisible life force. Qi circulates around the body along meandering pathways called meridians. Like qi, the meridians are invisible and cannot be found by dissection. When illness blocks qi, acupuncture can help unblock it, which restores health.

Nonsense, say Western medical critics, who scoff at invisible meridians and qi as unscientific concepts. At worst, they say, acupuncture is a form of primitive superstition, and at best, it's nothing more than a placebo effect. In the words of Robert J. White, M.D., a professor of neurosurgery at Case Western Reserve University School of Medicine in Cleveland, acupuncture "has the same scientific validity as astrology or alchemy."

But according to studies by acupuncture researcher George A. Ulett, M.D., at the University of Missouri School of Medicine, acupuncture is neither alchemy nor placebo. Placebos produce benefits in about one-third of those who use them, Ulett explains, but most well-designed studies of acupuncture pain relief show effectiveness in the range of 55 to 85 percent.

"The evidence suggests that acupuncture works neuroelectrically," Ulett explains. "In my view, the meridians are not invisible. They are the motor nerves, the ones connected to the major muscle groups. Stimulating acupuncture points changes the flow of bioelectrical energy along these nerves and triggers the release of neurotransmitters, which produces its effects."

Acupuncture still has its critics. "Some won't accept anything that can't be fully explained in Western scientific terms," Culliton says. "and acupuncture still can't be, at least not yet."

The critics have a point. Over the years, quite a few studies have shown no benefit for true acupuncture over the "sham acupuncture" typically used as the control in recent experiments. Margolin, author of the cocaine study, thinks he knows why.

"It's quite possible that the 'sham' points some researchers used actually had some activity." Margolin eliminated this possibility in a study published last year that showed activity for the classic ear points used in addiction treatment, and no activity for specific sham points he investigated. He then used the "certified" sham points in his new study on cocaine addiction, confident that they really were sham points.

Questions remain about the methodology of acupuncture research, but in recent years, the critics' numbers have dwindled. "Lately, I've noticed greater acceptance of acupuncture by the medical community," Margolin observes. A key reason, he says, has been the increasing number of rigorous studies published in mainstream medical journals documenting its benefits.

Recently, in addition to the new study of addiction, there have been several meta-analyses of successful acupuncture treatment for temporomandibular joint dysfunction (TMJ), fibromyalgia, back pain and hives as well as studies showing its effectiveness on arthritis, asthma, diabetic nerve damage, headache, impotence, menstrual cramps, postoperative pain and tennis elbow.

In 1998, the National Institutes of Health asked a panel of experts from major U.S. medical centers to evaluate acupuncture. Their report, published in the Journal of the American Medical Association, concluded: "More than 1 million Americans receive acupuncture each year. The data in support of acupuncture are as strong as those for many accepted Western medical therapies. There is sufficient evidence of acupuncture's value to expand its use into conventional medicine."

The NIH panel was also impressed with acupuncture's safety: "The occurrence of adverse events in acupuncture has been documented to be extremely low," its report said, "lower than that of many drugs or other accepted medical procedures."

Whatever the experts decide, however, acupuncture has found a true believer in Valerie Wilkerson. So much so that she now devotes her life to getting out the message to addicts in her old crack-ridden neighborhood while working as a community liaison for Lincoln's substance abuse treatment program.

"I encourage users to come in for treatment. I tell them I tried other programs, but finally got off drugs at Lincoln. Acupuncture had a lot to do with it. It definitely helped me, and I've seen it help many others."