The quest for sweet semen

I learned how to transform funky spunk into delicious joy juice -- but ultimately decided not to. 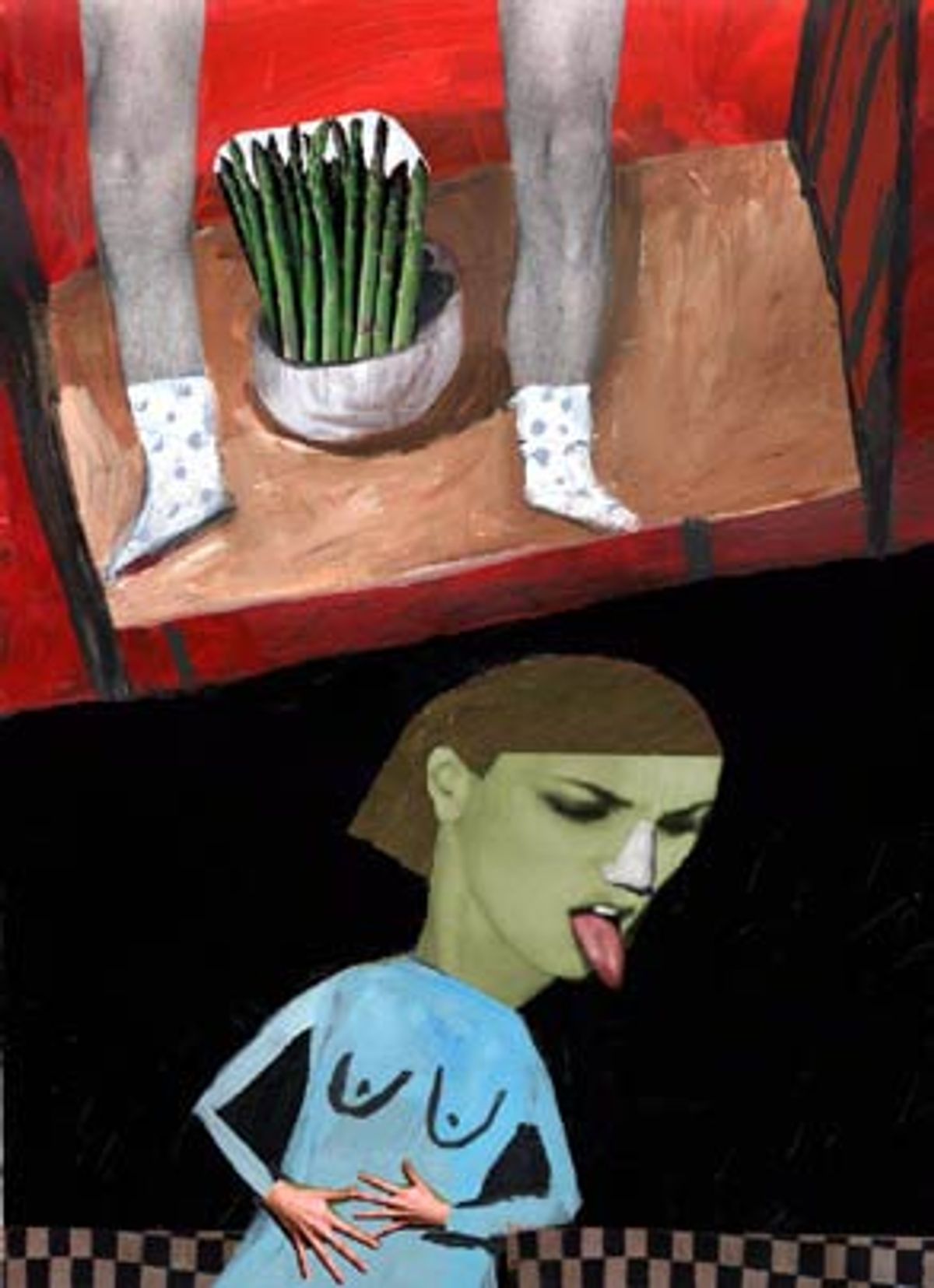 "You've got funky-tasting spunk," Samantha tells her bitter paramour on the Aug. 6 "Sex and the City" episode, as she refuses to fellate his foully spurting member. "Giving head [to you] is like a trip to the rotten-egg buffet."

"I'm sorry, I'm sorry, please just spit it out anywhere, on me or the blankets; I'll clean it up and I'll bring you a big glass of cold water." Blow jobs bestowed on my happy organ invariably end with me mumbling ashamedly, as if I had just splattered eggnog all over the Christmas table. I view my gobs as disgusting dollops.

I lied too, 25 years ago, when I gobbled through the same horrible gastronomic gantlet. My lover Robyn perceived my bluff; she forced me to admit that I loathed the salty, viscous wad. Ever since then, my glee at getting my lollipop licked has been tainted with advance remorse: My receiver is about to be nauseous.

"Sex and the City" provided me with a glimmer of hope, though, a key to decontaminating the puddles of my prick. When Samantha presents her pungent dilemma at lunch to her female friends, they advise her that "it has something to do with nutrition ... there's something he could eat to make it sweeter." Her subsequent attempt to detox his dribblings with wheat grass juice and a ginger-melon smoothie proves unsuccessful, but I still wondered wistfully: Is a herbal remedy available? Is there a semen-sweetening savior?

Trebor's report depressed me, because I'm neither vegetarian nor an avid imbiber of beverages. My next call was even less reassuring. Al Lujan, a head-bobbing writer, performer and filmmaker, said that the first sperm he swallowed tasted the best because "it was dispensed from a 15-year-old kid who lived off candy. My following experiences left me with the impression that the older you get, the nastier your sperm tastes. Ah, sweet spurt of youth."

I'm 48 and I never eat sweets, so my phallus phlegm is getting fouler every day? I decided to stop querying gay guys immediately; my survey swiveled instead to wide-jawed women.

Sex writer Katy Bell -- who says she has "slurped the milky way from California to New York to Mexico" -- ticked off three nutritional tips for a mellow ejaculate: hard candies, gallons of apple juice and fruit. But her must-be-avoided list was far lengthier, and it included all of my favorite foodstuffs: asparagus, chicken, garlic, onions and dairy products. Egads! My dream menu is an abomination.

A quick Yahoo search of "taste of semen" info sank me further into self-revulsion. Asparagus popped up incessantly on my screen like a sprouting forest of the slender green shafts; it's unanimously the worst culprit in causing stinky semen. This plagued me because I eat entire phalanxes of the delicious spears every week -- big, fat battering rams and skinny arrows; I slather them all with mayonnaise and cram them into my maw, even the stems.

Urologists, I decided. I dialed some dick doctors. Dr. Lawrence Ross of the University of Illinois in Chicago shocked me by totally dismissing the entire notion that disparity in taste even exists! "In all healthy men," he contended, "seminal fluids are constant and similar because they all include precise components -- potassium, calcium, sodium, magnesium, phosphorus, etc. -- that maintain the very stable pH acidity that is needed to support the spermatozoa." In other words, a foul stench is exactly what the polliwogs want.

Dr. Robert Oates of the Boston Medical Center offered only a grudging acceptance of the flavor theories. "I wouldn't be surprised if substances like garlic and asparagus that come out in urine and sweat were also secreted in semen," he admitted. "But there's no definitive data on this. Medical research is done for crucial health reasons and this doesn't qualify." What!? He's obviously wrong: Our planet would be infinitely more peaceful if semen tasted like Snapple.

My final inquiry was to William Fitzgerald, Ph.D., of the Silicon Valley Relationship and Sexuality Center. "Bill" warmly and promptly delivered a huge load of info. Semen's metallic taste, he explained, is due to its zinc ingredient, and "diabetics tend to have a honey or cantaloupe taste, most likely due to the spilling over of excess sugars in the body." When amino acids in certain foods are broken down, he continued, it's possible that the resulting products end up in the semen. Asparagus' curse, for example, could be that "methionine is broken down and methyl mercaptan is produced ... with its awful odor." Nicotine and certain drugs can also "be deposited in genital organs like the epididymis and seminal vesicles."

OK. All right. I memorized all my notes. If anyone knows how to make his spunk scrumptious, it's me. All I have to do to get the tastiest tube on earth is to subsist eternally on the sap of 12 stupid items that bore me to death. I'd do it, I decided. But then, I felt a sudden pang of evil hunger, a repulsive yearning inside my gut for asparagus and mayonnaise with slabs of greasy, spicy beef and a giant glass of chocolate milk.

But give up my favorite foods? No way. Ain't gonna happen. I'll never stop swallowing asparagus, even if it means I'll never get swallowed.

Hank Hyena is a former columnist for SF Gate, and a frequent contributor to Salon.