Why are we hearing about a successful hand transplant two years after the fact? Maybe because the field's first poster child turned out to be a criminal who couldn't afford his meds. 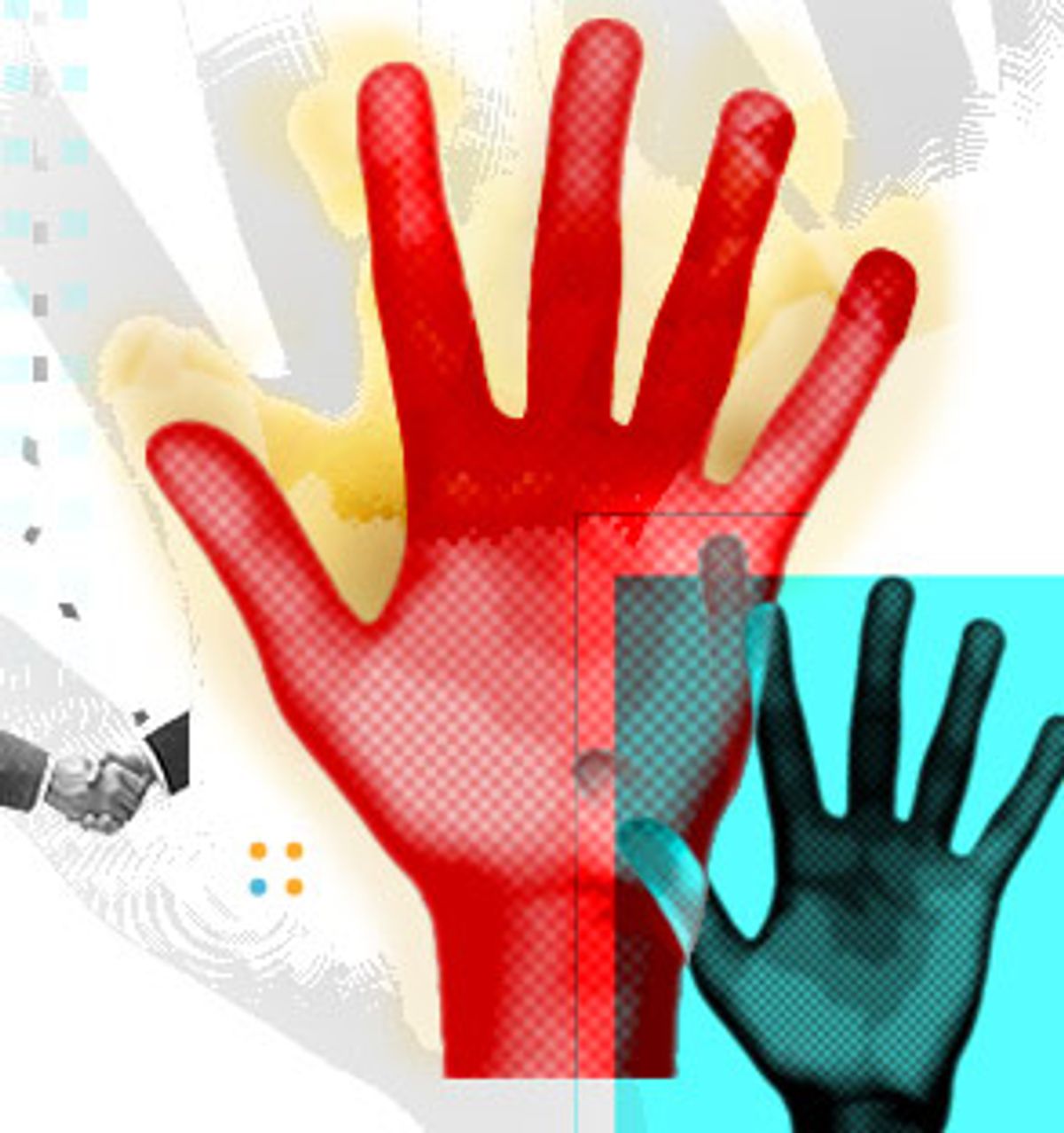 Two years ago, a New Zealand businessman made medical history when physicians in Lyon, France, replaced his amputated right hand and forearm with replacements salvaged from the corpse of a Frenchman whose brain had just been crushed in a motorcycle crash. The successful operation on Clint Hallam, 48, was a coup for the French-led team. They beat out University of Louisville transplant specialists who had been promised by Hallam that they could operate on him.

This week, the New England Journal of Medicine announced the successful results of a similar operation on Matthew Scott, the 38-year-old New Jersey paramedic whom the University of Louisville team operated on four months after the Hallam operation. They reported that Scott can now write and turn the pages of a newspaper, tie his shoes and pick up his two sons. In the subsequent media fanfare, a thoughtful Scott appeared on ABC's "Good Morning America" on Friday talking about how he'd resigned himself to a life of disability since age 24 when he had a stupid accident with a firecracker.

So why was Scott's operation worthy of such media attention? Why aren't we reading about the successful results of Hallam's hand surgery instead?

Maybe it's because Hallam turned out to be a crook and con man who lied his way into the operating room and hasn't stopped lying since. Maybe it's because Scott was much readier for prime time. Although Scott has had more complications than Hallam, the relative success of his operation -- and his appealing appearances on TV -- have breathed new life into this fledging field.

In an era of media-driven medical science, patient personality has become increasingly important. Think spunky hemophiliac Ryan White and AIDS, think Christopher "Superman-brought-low-but-still-fighting" Reeve and stem cell research. In the case of Hallam and Scott's hand surgeries, personality was even more important than getting there first. Poster child patients become more than the "first try" at a new technique or drug: They become symbolic of the illness or treatment as a whole. A noncompliant patient makes follow-up care difficult, and can end up giving the research or treatment a bad name.

In this case, the messy life of Hallam not only complicated his recovery, it added fuel to the arguments of physicians and medical ethicists who regard limb transplants as unnecessary elective surgeries requiring toxic immunosuppressant drugs.

Still, much as they might like to, the surgeons who gave Hallam a hand can't ignore him. As Hallam travels the globe, one step ahead of police, his doctors are forced to ignore his trespasses as they struggle to keep him and his hand alive.

"I've told him time and time again that he has to take his medication if he doesn't want to die, but with Clint it's not only a medical problem, we have to sort out social problems as well," says Dr. Nadey Hakim, a British transplant surgeon. "He's not the ideal patient, but at this point we've no choice in the matter."

Hallam lost his hand in a circular saw accident at a woodshop in a New Zealand prison in 1984 where he was serving a sentence for fraud. The hand was sewn back on but didn't take and was removed in 1989. From that time on Hallam began haunting the offices of physicians around the world who were investigating the possibility of limb transplantation.

Hallam eventually made contact with both the French team and the Louisville team, offering himself as a subject for surgery. He lied about his past, saying he'd lost his arm in a construction accident.

The day after his surgery, Hallam simply didn't show for the breakfast appointment he'd made with the Louisville doctors. When Dr. Warren Breidenbach, the leader of the Louisville team, called Hallam's wife back in Australia, she told him: "He doesn't need you anymore. He already has his arm."

Hallam's criminal record surfaced shortly after the operation, leading the French-led team, all men at the tops of their fields, to shake their heads at the confidence job he'd performed on them.

"He's an absolutely charming chap, clever enough to have fooled a great many people in his many careers," says Australian microsurgeon Earl Owen.

Owen, Hakim and six other top physicians from around the world had donated their time and money for the operation. At the hospital, Hallam befriended a French liver transplant patient, then ran up a $32,000 bill on the Frenchman's borrowed American Express card. Fleeing fraud charges in France, Hallam turned up at Hakim's flat in Britain and stayed for 10 days, working late into the nights on the computer trying to arrange the sale of his story.

Eventually the tabloid Mirror paid him $40,000 for a photograph of Hallam lifting a pint in a pub with the new hand. Hallam returned to Perth, Australia, where he lived in government housing with the most recent of his three wives. But soon the Australian authorities came around asking questions about some fake oil-purchasing licenses he'd allegedly sold to Asian immigrants.

In May, newspapers carried stories that Hallam was suffering a severe rejection episode and might lose the hand. But Hallam had planted the story. "He's fit as a flea," said Owen, who openly suggested that Hallam was just trying to keep New South Wales police off his back. Hallam left for the United States, telling Owen that Northwestern University had agreed to pay him $50,000 to participate in a cognitive neurology experiment. That story was false, too, Hakim says. Hallam actually had gone to stay with relatives in Las Vegas.

But even when the doctors can get their hands on Hallam, they face an uphill battle. Last week, when Hallam unexpectedly turned up in Lyon, blood tests showed he was taking less than a fifth of the medication he needs to keep from rejecting the transplanted hand.

"He claims to be taking the drugs, but the truth is he can't afford them," Hakim says. "These drugs can cost you $15,000 a year. And he has no insurance, nothing. He's not a European Union citizen, so he's not covered here by national health. In the States, they won't do anything for you if you don't have the money."

There's not much more we can do for him," says Hakim, who seems to maintain a grudging affection for Hallam. "Technically, the operation was a success. Two years later the arm is still hanging there -- that's a miracle."

Is it a miracle or has Hallam discovered the minimum dosage to keep his body from rejecting his limb? Of course researchers can't answer these questions. Hallam's behavior is too erratic to ever help create a protocol or an idea of long-term hand transplant prospects. For these things, they'll have to count on Scott and other manageable patients like him.

Surgeons have been sewing hands and feet back on since the 1960s, and have done organ transplants nearly as long. The technical challenge of a limb transplant from a cadaver donor is that various tissues are involved. While a liver is a liver and a heart a heart, a limb is really various tissues -- bone, tendon, skin, nerve, muscle and cartilage -- each with its own potential of provoking immune rejection in the transplant patient.

This technical hurdle seems to have been largely overcome by a cocktail of immunosuppressants including two new drugs. Known as FK506 and MMF, the drugs have been used for the past five years for kidney-pancreas transplants.

Still, no one can be absolutely sure what kind of long-term side effects these drugs will have. In an editorial accompanying the New England Journal article, James Herndon of Harvard Medical School argued that limb transplants were premature -- except, perhaps, for a patient already taking immunosuppressive drugs for a life-threatening problem, or for a person desperately in need of a hand -- a blind man with two stumps?

Scott's life since the surgery hasn't been easy. He's had three rejection episodes, each treated by upping the regimen of immunosuppressant drugs. But Scott's successful and well-publicized operation, coupled with the publication in the Journal, may give a boost to the field of composite-tissue transplantation -- premature or not.

Scott Gruber, a 43-year-old transplant surgeon and pharmacologist who participated in Scott's operation, said that in conjunction with the Journal publication, the University of Texas at Houston had formally announced that Gruber would direct the new Houston Hand Transplant and Composite Tissue Allograft Institute.

The institute will do femur, knee, tendon and larynx transplants -- for starters. In the future, transplant surgeons have even talked about doing face transplants.

Penis transplants? "I won't even go there," Gruber says.

Hallam, Gruber says, "was, to be honest with you, not good for the field. We [the Louisville team] were working from a three-year program that did all the basic research, got all the ethical experts involved, with public disclosure, as opposed to the French who did it with no paper trails to support it, out of thin air. And they ended up with a con man who went eight months without follow-up."