The school unveils its new atrium, built to replace the library where so many died, and the victims' families find some peace. 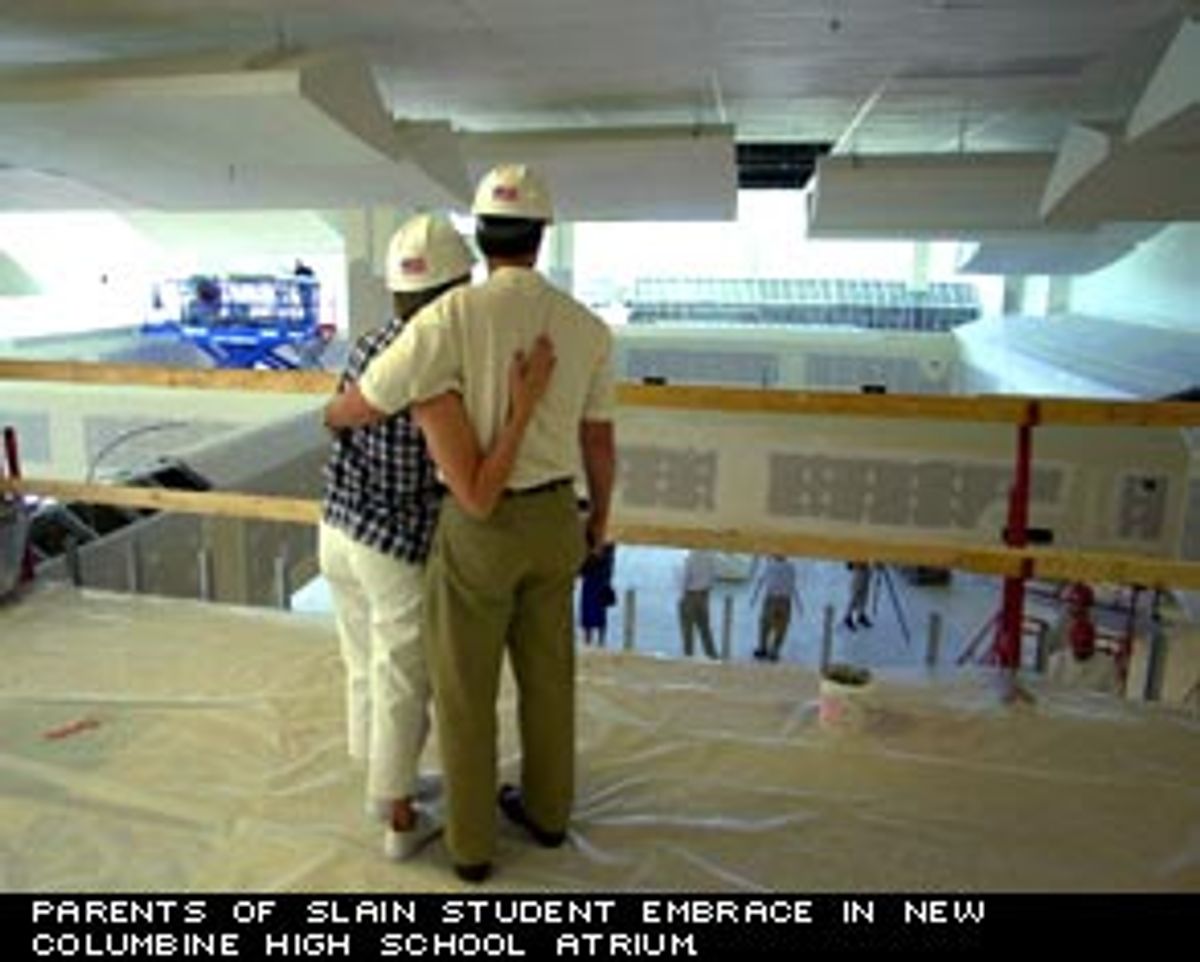 The best news about Columbine High School anyone has gotten since the tragedy was no news: When school resumed a week ago Monday, nobody came to cover it. Students and staff were relieved, and the reporters chained to this story the past 16 months were pretty happy, too.

But last weekend Columbine officials held a press event showing off the new school atrium, phase one of a $3.1 million project to raze the old library -- where most of the students were killed April 20, 1999 -- and add on a new one, adjoined to the school by a hallway.

A year ago, the school had unveiled its post-massacre renovation project to reporters, on the eve of its "Take Back the School" reopening event, and the half-baked solution to the library problem was its most disturbing feature. The goal was laudable: to keep the structure of the school intact -- so students didn't feel they'd lost it -- while making superficial changes to provoke subtle differences in perception that would be hard for students to put their finger on. There were softer colors, a different pattern on the ceiling, new texture on the floor, different clatter in the hallway.

The glaring problem, though, was that dreaded hallway past the library. They'd erected a wall to cover the internal library windows, and installed a long bank of dark blue lockers to camouflage the empty space. It evoked way too many associations with childhood horror fables: dead bodies walled off by crazy grandpa in the cellar, the telltale heart lurking under the floorboards. I found myself thinking: We know what's back there, we know what you're hiding.

A year later, Brian Rohrbough remembers that temporary solution as a metaphor for the massacre's aftermath. "Everything about what happened here has been hidden," he says. His son Daniel was one of the first killed, on the steps just outside the building. He spent the next 16 months leading some of the families on a relentless investigation, which culminated this April in a series of lawsuits against the sheriff's department.

The atrium, by contrast, was the victims' parents' own solution. The district initially hoped to simply redesign and reopen the library, but the families had been adamant that no one should ever set foot in there again. They raised $3.1 million to tear it down and build a new one.

One of our nastier local columnists had written this spring that the families should stop whining and sucking up money for their problems. I thought he was a jerk to complain, but I did think the families were misguided. It was hard to see how ripping out a floor and ceiling was going to provide the kind of relief they were looking for.

How could obliterating the library wipe out their bad memories? They'd thrown their hearts into this campaign for a year now, they were heavily invested emotionally and they seemed to be headed for sure disappointment.

But I was wrong.

The cafeteria was wide open and airy with the extra vertical space from the atrium and an eye-catching mural on the ceiling. The plate-glass windows that had been blocked by lockers were clear again, looking down into the cafeteria, across to green outer tinted windows, and all the way to the Rocky Mountains if you scrunched down and peered.

But the change wasn't about the view, the painting or anything outwardly architectural; it was what was missing. The library had vanished. It didn't feel hidden, it didn't feel missing, it looked and felt like it had just never existed.

I wasn't going to talk to the families, but they actually encouraged our questions. In fact, one of the objectives of the atrium press conference was to thank the media. "What did you say?" I asked the communications manager when she told me. "I thought you just said, 'Thank the media,'" We hadn't exactly endeared ourselves to these families, after all, and our overall likability ratio was rock-bottom across the school population.

But they wanted to thank us for publicizing their fund to raise the money, and they had baked us M&M cookies and delicious banana bread to show their appreciation.

Most seemed visibly relieved by the atrium project. It was hard to keep my eyes off Sue Petrone. She was Danny Rohrbough's mother and I'd seen her countless times before. She was usually upset, which was understandable in light of whatever latest unpleasantness had brought us all together again. On the occasions I saw her smile, she seemed like a deep-down joyful person being crushed under all that grief.

On Saturday she was positively beaming. You couldn't miss her in the crowd: a cluster of happy families, with one woman among them who looked like she'd just won the lottery. When I ran into her upstairs in the hallway, looking down into the cafeteria, she hadn't lost a hint of the glow, and I just had to blurt out my reaction: "Sue, I have just never seen you so happy!"

She beamed a little harder, gushed about how good it felt, how oppressive the crime scene felt hidden behind that wall. "When you came in the school, it just felt like a heaviness, like you're under water and can't breathe. And then when we came in -- once the floor was gone, it was like all that was lifted away."

It wasn't all peace and tranquility: too many lawsuits and questions and maybe even coverups in progress. Brian Rohrbough clearly has a way to go in his grief process. The fight to raze the library is over for most of the families, but he's still in a pitched battle to discover how and why his son died. And he's still upset at the school's reaction to the tragedy. He feels the school culture played a part in what happened, and the administration hasn't made any progress toward changing it.

And then there was principal Frank DeAngelis. He's a long way from reaching the relative tranquility of the families. He was mostly smiling, but definitely still carrying a huge weight: It's unmistakable. It got a little worse last month, when several of the families extended their lawsuit to include him and other school officials. District lawyers warned him it would happen, that it was a standard practice to name all possible defendants in the chain of command.

'They tell me not to take it personally," he said Saturday. "But there's my name at the top of the lawsuit."

Rohrbough and DeAngelis kept their distance for over an hour, but they had to greet each other eventually. It was all very friendly on the surface: They spoke in code, but everyone knew what Brian was referring to when he said the physical changes were completed, and now he was looking forward to "other kinds of changes."

It was painful to watch, but it was a brief moment at an event that was amazingly uplifting.

Petrone said she felt completely different since she first walked into the building; all the families had come in for a preview together, everyone had been taken aback by the change. "It's like getting past one stage, and now we can kind of move on to more personal things," she said.

I couldn't resist asking her what other stages lie ahead.

"For me -- I really don't know. I guess we're still trying to find what our family is. Because it's so changed. We tried to make it what it was before, but you can't, because there's this gaping hole. So we're just kind of working on that right now, to kind of take a break from all the public thing."

It might sound a little sad when repeated, but Petrone's smile never dimmed as she said it.