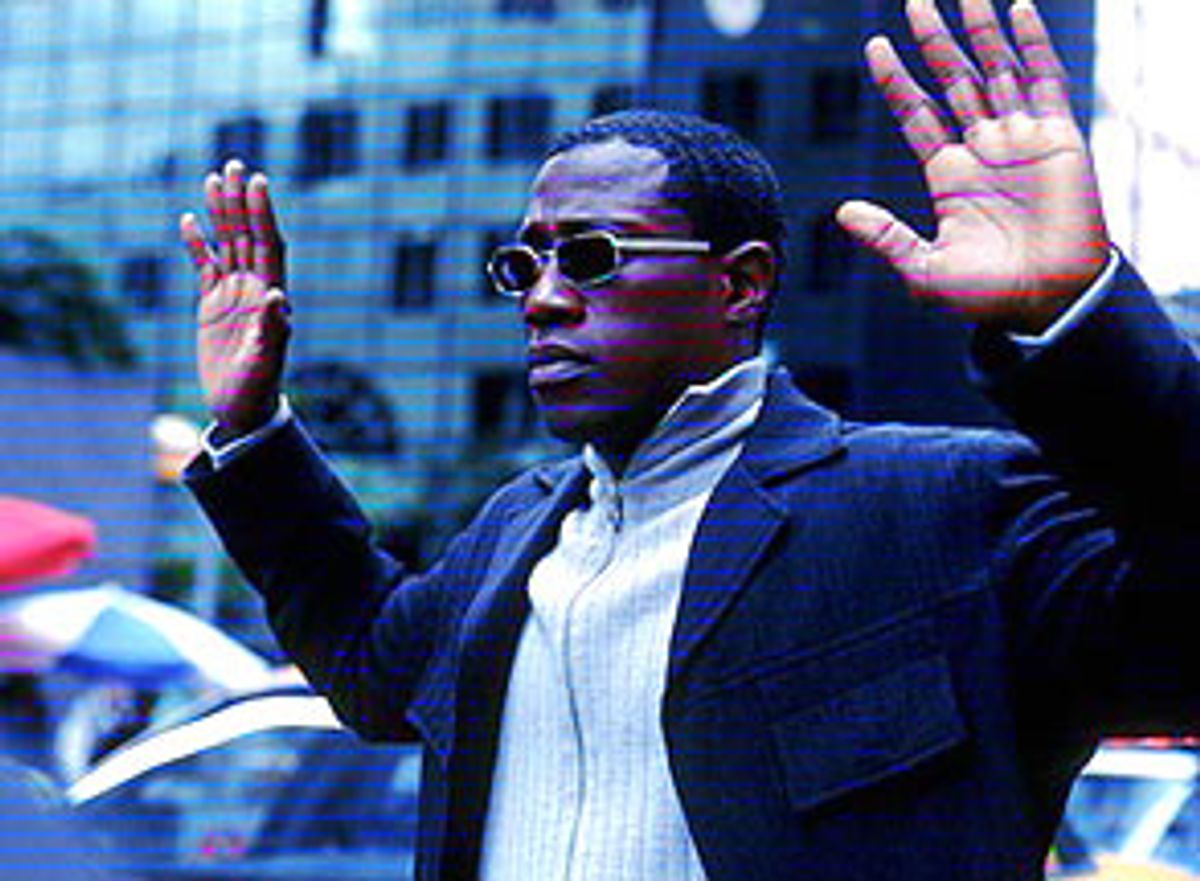 OK, so nobody's going to remember "The Art of War" as a classic of modern cinema. It's what you might call a grade-B blockbuster: one star, a little-known director and a moderate budget, cautiously spent on making Montreal locations look like Manhattan.

Still, amid the end-of-summer trash being swept out the studio doors, "The Art of War" (yes, another tiresome reference to the proto-management text by Sun Tzu) comes off as a delirious, high-energy action fantasy with plenty of wit and style. It chokes on its serpentine plot twists in the end, like a boa constrictor swallowing its own tail. But for action-adventure fans who feel a little underserved this summer, it should make Labor Day more tolerable.

French Canadian director Christian Duguay does not display an original idea in the entire film, but he's a slick synthesist who melds various styles effectively and sustains a mood of deepening paranoia. (His earlier films have included a nifty little thriller called "The Assignment" as well as "Screamers," an intriguing horror/sci-fi combo.) "The Art of War" is part James Bond adventure -- and Wesley Snipes looks smashing in that tuxedo -- part Hong Kong-style action blowout and part deep-cover espionage in the philosophical potboiler vein of John le Carri.

Throw in some generic post-"Blade Runner" rain-soaked cinematography, some slo-mo explosions in the "Terminator" mode (appropriately enough, Duguay is slated to direct "Terminator 3") and, hell, you've got a movie better than most I've seen in the past three months.

People around me were snickering at the convoluted plot, which involves secret United Nations intelligence agents, tattooed Triad gangsters, Chinese government officials and wacko right-wing moles in high places. But I'm a sucker for this stuff; if "Billion Dollar Brain" or "The Spy Who Came in From the Cold" were on TV right now, I wouldn't be sitting here at my computer.

Since the end of the Cold War, few films have successfully captured the mood of existential loneliness found in the best thrillers of that era. (Brian De Palma's "Mission: Impossible is among the rare exceptions, while John Woo's sequel, for all its pyrotechnics, felt flaccid and plotless by comparison.) For most viewers, the appeal of "The Art of War" will lie in Snipes' potent physicality and charisma, but the script by Wayne Beach and Simon Davis Barry is cleverly constructed and loaded with enjoyable flourishes.

"This is just like [pro] wrestling," growls Cappella, the jowly FBI agent played by Maury Chaykin, when things really start to get confusing. "It's reality mixed with illusion mixed with bullshit mixed with big scary guys from parts unknown in dire need of psychiatric care." Cappella is trying to figure out whether the suave and mysterious Shaw (Snipes) is a hit man or a secret agent or both, and why large numbers of sinister and heavily armed Chinese hooligans are provoking him into one kung-fu battle and daring escape after another.

Naturally, we're way ahead of the FBI slowpoke: Shaw is a triple-deep undercover man working for Eleanor Hooks (Anne Archer), who is "right-hand man" to the United Nations secretary-general (Donald Sutherland, getting to play an actual Canadian for once; the idea of a Canadian secretary-general of the U.N. is one of this film's more charmingly far-fetched ideas).

Hooks' clandestine operation is trying to shore up a U.N.-brokered Chinese trade deal, which persons unknown are trying to sabotage. Hardcore Chinese Communists? Right-wing Americans? Triad mobsters? Hong Kong tycoon David Chan (Cary-Hiroyuki Tagawa), referred to terrifyingly as "the Donald Trump of China"? To give away any more than that might compromise this film's oddball political perspective, which may make no sense whatever but is certainly distinctive.

Personally, I'm grateful that Snipes' efforts to become a serious dramatic actor appear to be on hold. He's endowed with prodigious grace and power, but maybe he needs physically demanding roles to keep his mind focused on the work. The guy who drifted uncomfortably through the dreary "Murder at 1600," the awkward "One Night Stand" and the amateurish "Down in the Delta" was in danger of drifting away from stardom altogether. He has never been better than as the preening, exaggerated hero of "Blade," and he evidently has a blast as the unflappable Shaw, who may be outgunned and outnumbered but will sure as hell never be outcooled.

We first meet Shaw, looking a little like the dashing Bill Cosby of "I Spy," in the movie's dynamite opening scenes, when the U.N. team interrupts Hong Kong's Millennium Eve festivities (hosted by the unctuous Chan) to blackmail a corrupt North Korean official back to the bargaining table. I'm sure the mere idea of a U.N. espionage force will send the one-world-government chat-room wackos into an orgasmic frenzy of fear and joy. But it's just goofy enough to get "The Art of War" started on the right hyperbolic arc.

Seriously injured in the Hong Kong escape, Shaw reluctantly returns to duty a few months later for the Chinese trade assignment and things start going wrong. His fellow team members (Michael Biehn and Liliana Komorowska) vanish or end up dead, and Shaw himself is framed for the dramatic assassination of a Chinese official. (While most of this film's violence is cartoonish in nature, there is one upsetting scene of a drawn-out, sadistic killing.)

In time-honored thriller tradition, Shaw winds up on the lam with Julia (Marie Matiko), a Chinese translator-cum-Manhattan club chick who is also the only witness who can clear him of the killing. A lanky gazelle wearing a protective scowl and awesome little shades, Matiko is a natural, and her scenes with Snipes have an unforced and underwritten chemistry. (Perhaps it's a little curious that both of the major Chinese characters in the film, Julia and Chan, are played by Japanese-Americans, but I don't suppose it should matter.)

Separately, Shaw and the lumbering, wisecracking Cappella -- Chaykin is an especially enjoyable presence here -- begin to decipher the implausible conspiracy. While some of the villains are obvious, scriptwriters Beach and Barry manage their disclosures economically, at least until the last few ludicrous minutes, when Shaw must engage in hand-to-hand combat with his nemesis in the empty lobby of U.N. headquarters.

If Duguay isn't especially skilled with actors, he handles set pieces brilliantly, and "The Art of War" is full of careening chase scenes, exhilarating fights, backroom intrigue, dizzying shifts in perspective, bleached and reprocessed flashbacks and whatever else he can pilfer from Hitchcock, Scorsese, Woo, John Frankenheimer et al. Ordinarily this would irritate me: There's the restaurant-kitchen tracking shot from "GoodFellas"! There's the deconstructed assassination sequence from "The Manchurian Candidate," by way (maybe) of De Palma's "Snake Eyes"! But action cinema is more about vigor than innovation, and unlike entirely too many Hollywood directors, Duguay actually seems to like his job.