Two, four, six, eight, who do we appreciate? Spunky cheerleaders rip up the color line. 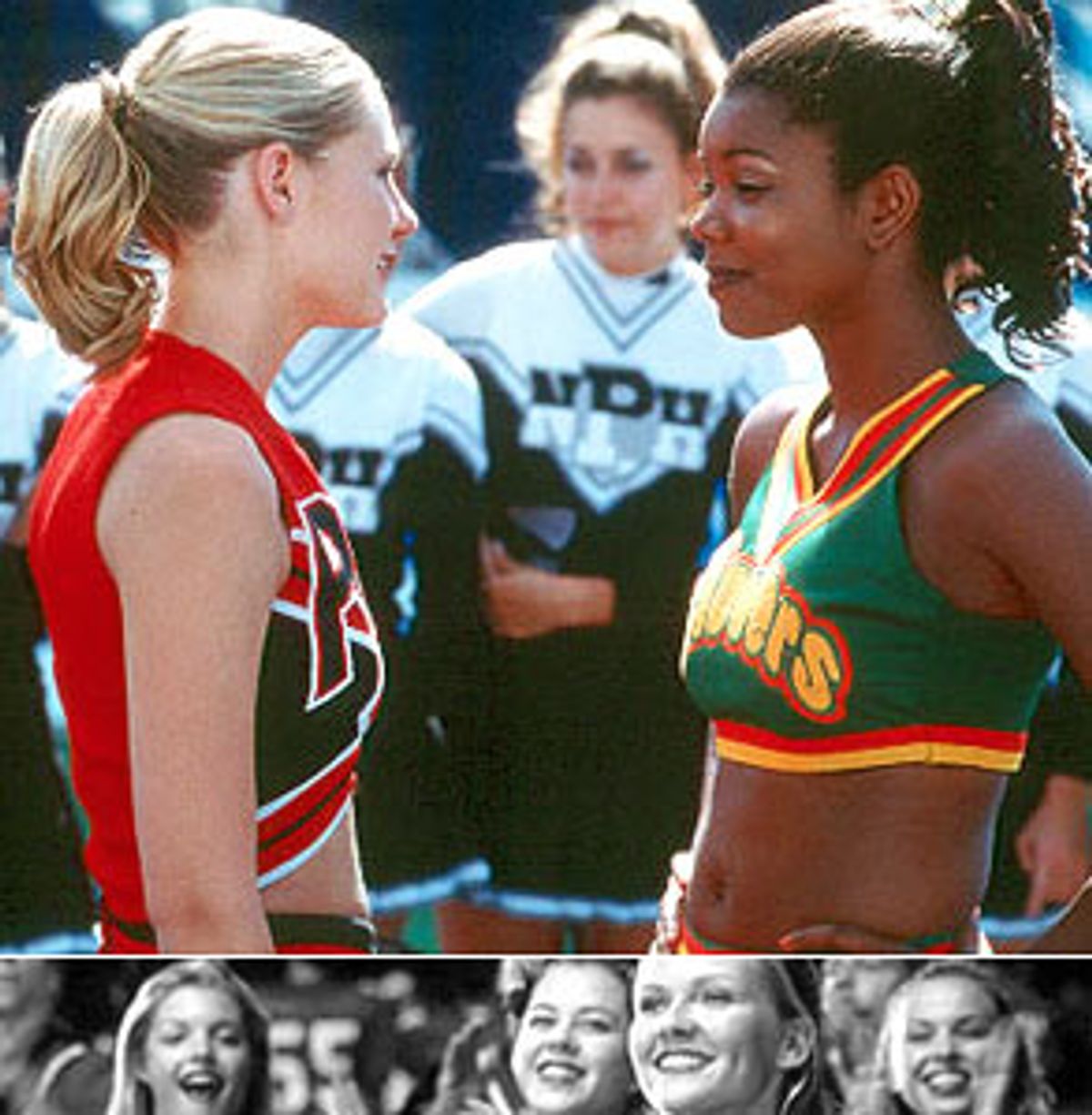 With her Pepsodent smile, deep-dish dimples and gleaming blond hair, Kirsten Dunst looks like a walking glass of lemonade. But among contemporary teenage actresses, Dunst has become the sunniest imaginable parodist. All gee-whiz earnestness on the outside, she's the slyest stone fox underneath. Where some young actors play the pain of teen disappointment, Dunst plays the comedy. She almost always manages to make it funny when her characters undergo the dawning awareness that life is much more unfair than they ever fantasized. Dunst sets herself up as the butt of the joke, inviting us to laugh that anyone could be so naive, but without ever condescending to the role she's playing.

As Torrance, the head SoCal cheerleader in the spunky, enjoyable teen comedy "Bring It On," Dunst starts out as a perky bundle of unbridled school spirit. Her San Diego alma mater, Rancho Carne High (if you don't know why that's funny, check out a Spanish-English dictionary),boasts five-time national cheerleading champs. They're so good that the only reason people go to see the school's lame-o football team in action is to see the cheering squad (made up of boys as well as girls) do its stuff. Torrance has long dreamed of being head cheerleader, but she didn't count on the pressure to remain on top, and for most of the movie's first third, the laughs come from Torrance's struggle to keep that cover-girl smile shining bright.

"Bring It On" doesn't provide Dunst with as good a role as she had in last year's underrated political satire "Dick" or as she had earlier this year playing '70s dreamboat Rapunzel of "The Virgin Suicides." But just when you're ready to settle for "Bring It On" being a pleasant, reasonably funny teen comedy, director Peyton Reed and screenwriter Jessica Bendinger, both of them making their feature debuts here, toss in an unexpected twist.

Needing to fill a hole on the squad, Torrance recruits Missy (Eliza Dushku), a wisenheimer transplant from Los Angeles. Torrance does her darnedest to convince Missy, a gymnast who can pull off the moves the squad needs, that cheerleading isn't dorky but really, really swell. But Missy has a surprise for Torrance. After walking out in a huff minutes into her first practice session, Missy drives Torrance to L.A.'s East Compton High, where she reveals to the new head cheerleader the dirty little secret of her squad's success: Torrance's predecessor had ripped off the team's moves from this (predominantly) black team. Suddenly the dippily enthusiastic cheerleading routines we were laughing at seem faintly shabby and soulless, like those versions of Little Richard hits that Pat Boone recorded to make them acceptable to white audiences.

Cultural appropriation is so often addressed in terms of breast beating or white guilt that the straightforward treatment it gets here is refreshing. "Bring It On" spins a neat variation on the idea (true or not) of the natural soulfulness of black people. The routines of the East Compton cheerleaders (performed, I'm certain, by professional dancers) are a mixture of dance, acrobatics and gymnastics that have some of the jaw-dropping pleasure of watching the Nicholas Brothers dance. Like a great musical number or a great action sequence, these scenes return us to the childhood pleasure of being gathered up and twirled around: They're about the simple joy of defying gravity. You can't believe the heights that the girls get thrown to, and when they jump onto the boys' shoulders, it looks as easy as a film of a falling tree run in reverse. Still, I wish Reed hadn't felt the need to chop up the routines with different camera shots. We need a quiet camera to let us take in the beauty of the moves.

"Bring It On" never addresses the issue of appropriation as fully as it might, focusing instead on the comic attempts of the Rancho Carne team members to pull themselves back together. But the resolution the movie provides is honorable, a Utopian version of how different groups of people spur and inspire one another to do their best.

Peyton and Bendinger don't give the movie the spiffy sheen or deftness of wit (except in the opening sequence) it needs. Some of the cruelty of the kids feels overscaled, and some of the jokes obvious. (I could have done without Dunst's little brother from hell.) But it's a lively debut and lucky enough to have appealing leads. As Faith, the bad-seed demon hunter on "Buffy the Vampire Slayer," Dushku has been so surpassingly nasty that there are fans of the show who simply can't stand her. (To them, Dushku might as well be Faith.) Playing Missy, Dushku gives "Bring It On" the wised-up edge it needs. She's a cheerfully sarcastic foil to Dunst, and even funnier when she finds herself enjoying being a cheerleader.

Jesse Bradford (he played the boy hero of Steven Soderbergh's wonderful Depression-era drama "King of the Hill") does something similar in the role of Cliff, Missy's brother (and Torrance's heartthrob). He and Dunst have a tooth-brushing scene that's a joke on the romantic vanity of couples just getting to know each other. They start off masking their spit and then wind up competing to see who can spew out the biggest wad of mouth goo. A lively, funny quartet heads up the East Compton cheerleaders, consisting of leader Isis (Gabrielle Union) and her three closest friends, played by the members of pop vocal trio Blaque -- Natina Reed, Shamari Fears and Brandi Williams. (Their characters' names -- Jenelope, Lava and LaFred -- are almost as good a joke as the spelling of the band's name.)

"Bring It On" is no more than a trifle. But it moves along entertainingly right through to the end credit sequence, and its heart is in just the right place. This unexpected late-summer treat does something almost unthinkable: It makes the prospect of going back to school seem not so bad.