On the eve of President Clinton's trip to Colombia, critics say Washington cares more about its war on drugs than human rights. 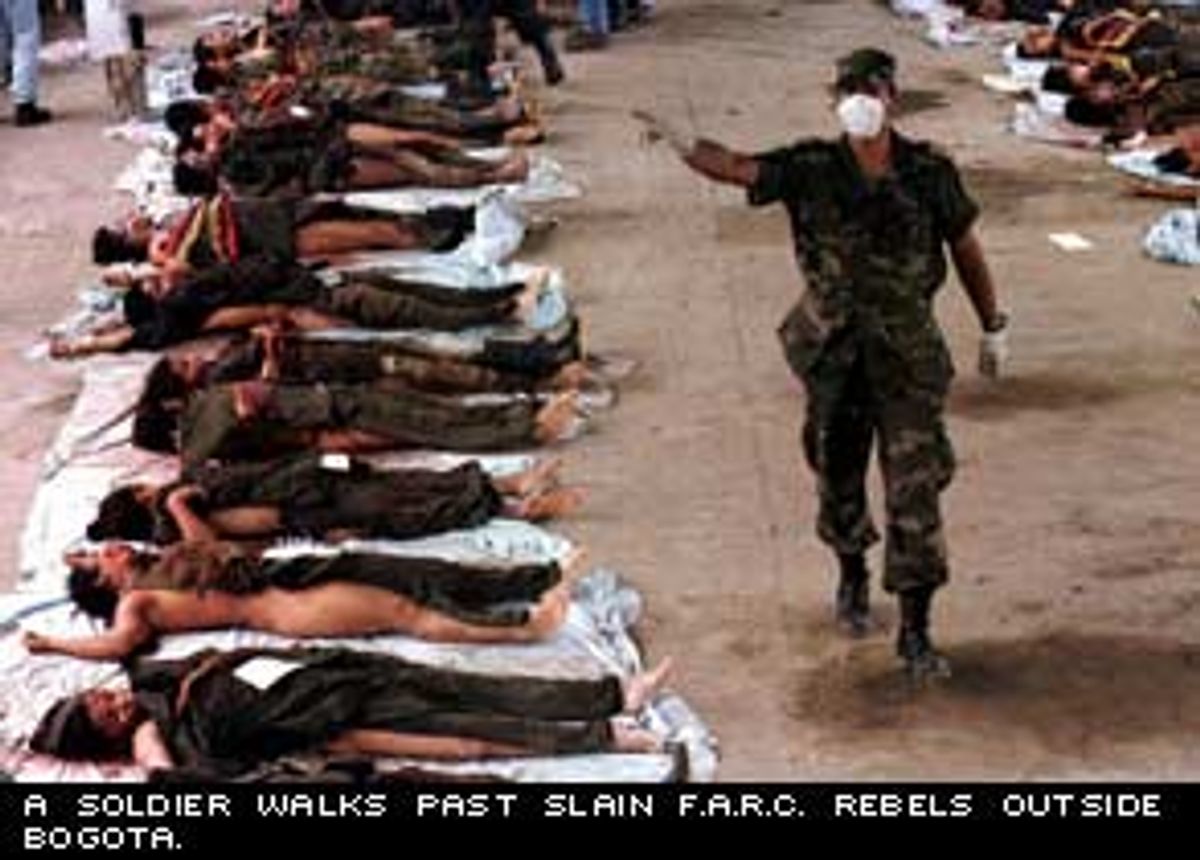 The final detail in the administration's long push of its hotly contested $1.3 billion anti-drug military aid package for Colombia is a visit by President Clinton to the South American nation Thursday -- a show of support for the country's embattled leader, President Andris Pastrana.

Clinton's trip follows his decision last week to grant a national security waiver for the aid, thumbing his nose at congressional critics and human rights organizations that had complained that the Colombian government had not yet met the human rights conditions set forth as a requirement for Plan Colombia.

The administration's decision to move ahead with the aid elicited harsh criticism from a handful of the congressmen and human rights activists who had participated in the six-month process of shepherding the bill through Congress. (Both houses of Congress approved Plan Colombia in early July.)

"You may say that human rights won by including strict language in the aid bill, but what good are words when we can just ignore them? We think this is the wrong policy at the wrong time," said Jose Miguel Vivanco, executive director of the Americas Division of Human Rights Watch, one of the U.S. organizations that worked with Congress during the drafting of the bill. "What the Colombian army's bad apples are hearing from this debate is, 'Human rights is just an official discourse, but in the end we don't need to worry about it,'" he said.

Clinton defended his decision, describing the situation in Colombia as too serious for any delay in the aid. "I think we've protected our fundamental interests in human rights and enabled Plan Colombia to have a chance to succeed, which I think is very, very important for the long-term stability of democracy and human rights in Colombia and for protecting the American people and the Colombian people from the drug traffic," Clinton told reporters in a White House Rose Garden interview.

In fact, as the aid debate continues to loom large in Washington, the civil war in Colombia is escalating. In one four-day period this month, guerrillas of the Revolutionary Armed Forces of Colombia (FARC) and rightist paramilitaries killed 33 civilians. FARC launched a campaign of terror to manipulate elections in several municipalities. Guerrilla promoters toting AK-47s have been summoning local candidates for mayor or city councils to intimidate them.

Paramilitary forces have also engaged in election season arm-twisting. They are believed to be responsible for the murder two weeks ago of Luis Fernando Rincsn, a peace promoter who was running for reelection as mayor of Aguachica, a town in the battle-plagued state of Cisar. A former guerrilla fighter who demobilized in the 1990s, Rincsn gave up on war to champion the right of civilians to not take sides. "Rincsn's murder was a clear political decision to eliminate the center. Every day, it becomes more dangerous to be against the war," said Francisco Santos, a newspaper editor who was forced into exile early this year by FARC guerrillas.

The Clinton administration says Pastrana's government is committed to improving human rights, and that nobody expected changes to be accomplished in the month that transpired between the approval of Plan Colombia and its implementation. And earlier this month, Colombia met at least one of the seven human rights conditions imposed by the U.S. Congress when Pastrana issued a directive establishing that any military personnel accused of human rights violations would be tried in a civilian court.

But Pastrana's directive is not in full compliance, says Vivanco of Human Rights Watch. "The conditions say the civilian courts will investigate all crimes against humanity as demanded by a 1997 constitutional court decision, but Pastrana's directive follows the military penal code," he said, referring to legislation, recently revised under military guidance, that limits civilian oversight to the most extreme army violations, such as genocide, torture, kidnapping and murder. "It ignores extrajudicial executions, as well as rape and common crimes," added Vivanco.

As many as 300 U.S. advisors are already stationed in Colombia. They are training the anti-narcotics battalions that will be deployed in southern Colombia, where 80,000 hectares of coca plantations are protected by FARC. The Colombian army expects to receive 18 Blackhawk and 42 Huey 2 helicopters to expedite troop movement across the country's extensive territory. But the helicopters won't be dispatched until the end of next year.

Though the Clinton administration agrees that Colombia has not met all of Congress' conditions for its receipt of funds, human rights advocates are still unsatisfied. They charge that the U.S. government is willing to overlook the human rights provisions to pursue an important strategy in its ongoing war on drugs.

Vivanco believes that Clinton could still use his political muscle to exert pressure on the human rights issue. "He could use the visit to highlight his human rights agenda in very explicit terms. The most important thing is not what he is going to say in private. Publicly he has to say that the bad apples need to be isolated ... Everyone must understand that they have to qualify for the next certification process at the end of the year." As part of the conditions for aid, Colombia must be certified again in December -- if it fails to be certified, continued funding would be withdrawn.

The human rights debate in Washington baffles some Colombian officials. "No government that wants to violate human rights would ask for money from other governments," explains Jaime Rumz, an advisor to Pastrana. "We knew that the moment we got the aid from the United States we would be putting a reflector on our internal affairs."

Yet the need to address human rights conditions becomes more obvious as the civilian toll increases. Colombians recoil in terror at the statistics: a murder every 20 minutes, an attack by a guerrilla or paramilitary group every six hours and a kidnapping every three-and-a-half hours. Recent figures released by the federal coroner's office show that more than 14,000 Colombians were killed in war-related violence during the first six months of this year alone -- and 90 percent of those casualties were civilian.

In the light of such alarming statistics, calls for humanitarian agreements with the armed groups are getting louder. "What we can affirm with certainty is that as the war continues to develop in the middle of civilian noncombatants, amidst parks, schools and churches converted in military objectives ... and while the international humanitarian laws are not observed there will be more tragedies," stated an editorial in the influential daily El Tiempo. But even journalists can't come to an agreement. "Are we to think that our conflict is a soccer game where each armed group would meet in a defined space and fight?" asked Mauricio Vargas, editor of the newsweekly Cambio.

What makes the issue even more troubling in Colombia is the failure of human rights monitors to enforce existing laws. Doctors Without Borders, the French group that won the Nobel Peace Prize last year for its work in Kosovo and elsewhere, just saw one of its health promoters get kidnapped by guerrillas. "Colombia is a difficult country for us," said the group's director in Colombia. "The army thinks we are aiding the guerrillas, while the guerrillas kidnap us."

Nothing brought the terror as close to home as the recent killing of six children, ages 5 to 10, by two army units perched on a hill. The victims were among a group of 40 children on a school field trip in the strife-filled state of Antmoquia. The soldiers fired for 45 minutes at the children and their chaperones, mistaking them for guerrillas while on patrol after engaging in firefights with guerrillas in nearby towns.

Shortly after the attack, the army said the children were killed in a shootout with guerrillas, who, according to the commander, had used the children as shields. But partly as a result of the international attention focused on Colombia during the certification process for Plan Colombia, the Colombian army and government had to retract their earlier statements. An investigation was launched that resulted in the suspension of 45 soldiers and some of their superiors. "A serious mistake," read the banner headline in the magazine Cambio, which is edited by Gabriel Garcma Marquez.

The killings of the children came just days after the army had celebrated a gratifying victory over the guerrillas by rescuing four kidnap victims, including a German citizen who was being held in a country house near the capital of Bogota. The rescue mission was daring -- paratroopers were dropped by helicopters into rough terrain at night, exactly the type of military action the U.S. trainers are supposed to teach the army. The army had also just launched a television campaign promoting its role as a protector of Colombia's democracy. The killings obviously undermined both developments.

And the international outcry over the killings has given Colombians a taste of what could come next. With the American aid, such incidents will be the subject of greater scrutiny by international media.

In Colombia, even critics of the army were careful to couch their statements in careful words after the killings. Attorney General Alfonso Gomez, a liberal who has led many battles against army abuses and corruption, was quick to point out that from initial investigations, it was clear the soldiers did not know they were shooting at children. But others latched onto the news as proof that Colombians aren't ready for U.S. military aid.

"The truth is that without the conditions attached to the aid, we would not have had the army willing to clarify the attack. Their first reaction was to blame the guerrillas for the incident," pointed out Vivanco of Human Rights Watch.

But presidential advisor Rumz said the problem with the debate in Washington is that American politicians don't understand how the conflict in Colombia has evolved. "Yeah, sure, we have a historical conflict that includes guerrillas and paramilitaries, but that historical conflict has been modified by drug trafficking. This is not Vietnam nor El Salvador. And if you want to write about the war on drugs, that's not exactly what is happening in Colombia.

"Sure we are in favor of decriminalizing drugs. And if the United States and Europe stopped consuming drugs, it would be better for Colombia. But the consumption in those countries is what generates the violence in our country. For us right now, to reduce violence and strengthen our democracy, we must reduce drug production," Ruiz said.

The next stage for disagreements between Colombia and the United States is already set. Some analysts think the policy is headed for serious trouble just because of the disconnect between the two realities. "We have to remember that Plan Colombia is a result of transactions in the U.S. Congress, and as such it is subject to the goings-on of American politics and public opinion. If there is another heart-wrenching accident like that of the children, or another humanitarian disaster -- from which we are not exempt -- there could be a breakup or discontinuation of the aid, severely affecting the military advances we would have gained," says Gabriel Silva, who was an aide to former President Cesar Gaviria.

"We should not get addicted to this aid," warns Silva. "It would be dangerous for this country to believe the tale that someone else will fight for us, and that they are also willing to pay the bill."