Two recent books -- "The Femme's Guide to the Universe" and "On the Trail of the Women Warriors" -- explore femme fatales, latex, the invincibility of waterproof mascara and Amazons. 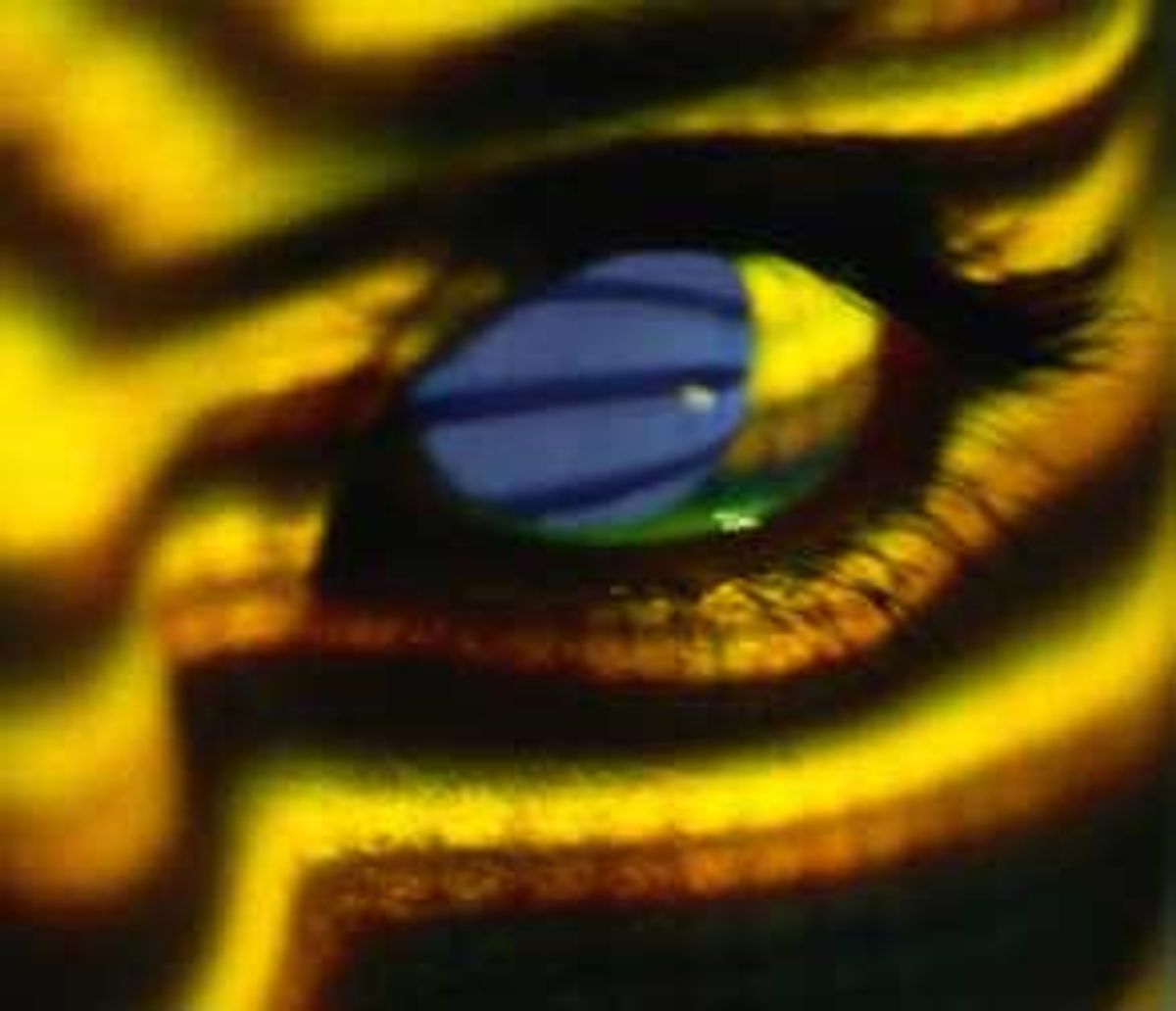 What makes Marguerite invincible is the waterproof mascara. My dear friend has other personal strengths, too, among them a degree in American literature and the equestrian poise to win, place and show at riding events across the country. And for years I was politic enough to know to emphasize those qualities when I told others about Marguerite-the-Omnipotent. Lately, though, I see it isn't so simple. So many people I know are smart and fit, but hardly formidable. If I'm going to talk about Marguerite, I have to say something about her mascara.

Her lipstick, too, which turns her mouth into a possible, albeit improbable, kiss. And I can't help but give honorable mention to her wardrobe, which shows off more variations on fur and feathers than there are species in the Galapagos. Marguerite is a femme. A new book by femme-for-life Shar Rednour called "The Femme's Guide to the Universe" gets her type just right when it says, "There is only one moment and that moment is her."

Rednour's book is to my friend Marguerite what lighting cues are to a Broadway musical. It gives technical information she follows instinctively but would be mortified to know I'd learned. (The reason Marguerite's lipstick doesn't smudge? She applies it after her powder which, by happy coincidence, serves as an anti-skid foundation.)

What "The Femme's Guide" provides more intriguingly, though, is a foundation for resolving what I'll call Marguerite's paradox: How does a woman overcome stereotypes about her sex by styling herself as a sexual stereotype? Put more bluntly, why does a pair of come-fuck-me pumps trump a pair of combat boots?

Start asking questions about sexual power, and people want to talk to you about Amazons. Ever since Homer dubbed them "women the equal of men," Amazons have served as an icon for everyone from feminists to misogynists to TV producers. Their warrior image has put them in combat boots. The archetypally strong woman is drawn as if she were a man.

On first look, even the word "Amazon" seems to suggest a masculine read. The most common etymology connects it to the Greek word for "breastless." But, in a recent book titled "On the Trail of the Women Warriors," journalist Lyn Webster Wilde uncovers an intriguing alternative: Pointing out that none of the Greek or Roman images of the Amazon depict her with a breast seared for purposes of archery, Wilde says, "another derivation for Amazon could be Phoenician Am (mother), and Azon or Adon, (lord), gives us 'mother-lord.'"

So the masculine martial image is challenged by an inherently female and overtly sexual projection of power as a function of childbearing.

In fact, the Amazon can be seen within the tradition of the ancient snake-goddess. "[S]exuality is well embodied in the symbolism of snakes," Wilde claims, "and I noticed that the Amazons were also frequently connected with snakes -- the African branch wore the skins of giant snakes as armour and one of the all-female tribes they fought were the 'Gorgons,' whose queen was Medusa, whose snaky locks and monstrous face turned men to stone if they looked upon her ... In a sixth-century relief from Corfu, you can see a Gorgon with two entwined snakes on her belly, wearing a short skirt which barely hides her genitals. It seems as if the snakes are really a disguise for the genitals that she conceals ... The suggestion behind all this seemed to be that there was a power residing in the female vagina and uterus that was so terrifying it could kill you."

I am thinking of Marguerite in her favorite latex bodysuit. "Latex shows all your curves," comments Shar Rednour, "yet perfects your surface into that of a shiny Maserati. I think it merges the best of the female body with the best of the automobile: beauteous, slick, shiny curves wrapping unbelievable power." Like a goddess in snakes, Marguerite is more sexual than she'd be without any clothing on: Her fake black nudity is as premeditated as first-degree murder.

The femme may share with the prom queen a passion for mascara, lipstick, 6-inch heels, and all the other drag, but what she does with those materials is fundamentally different. Muffy-the-Marriageable pretties herself the better to bring home an eligible bachelor; Marguerite-the-Omnipotent, on the other hand, takes bedroom fantasy right onto the street. Rather than protecting her privacy, she denies the very possibility of it. She makes the world her bedroom. She's expansive in that way. She exaggerates, especially her appearance: "Rip off boring buttons and replace them with gemstones," Rednour advises the femme-in-training. Beauty is imposed upon the eye of the beholder. Sex is projected. Not a tittle is left to the imagination. The femme fashions herself as an object of desire -- OoD in Rednour's language -- with all the marketing, design and production savvy of Maserati bringing a new car into the showroom.

But there's a distinction: Whereas the Maserati can't drive itself, femmes "can be super-hot on our own," Rednour says. "We don't require someone else's attention to be sexual. We can be our own OoDs." Sexual desire exposes the vulnerabilities of mere mortals; is it any wonder that the femme is invincible with her desire self-contained in latex?

Lyn Webster Wilde reminds us that another aspect of the Amazon myth lies in her mating ritual: Once a year, the Amazons were reputed to visit a neighboring tribe for purposes of impregnation. Men served, in effect, as anonymous sperm donors. According to one version of the story, male offspring were returned to their fathers; according to another, they were killed. Either way, men served at most a trivial role in Amazon life. Amazons lacked cultural vulnerability because desire was societally self-contained. Children were sexual clones of adults. Except on the matter of breasts.

Returning children to their rightful place in the Amazon myth gives Amazons back their mammary glands. In fact, their breasts become the most potent symbol of their sexuality. Looking again at the snake-goddess, Wilde says, "It becomes clear that breasts ... were not considered primarily as being there to suckle children, but as an adornment and a badge of strength. The breasts of the snake-goddesses or priestesses are thrust forward, engorged with power, the nipples erect, signifying arousal."

"Big or small, boobs are where it's at," concurs Shar Rednour in her own particular way. "Breasts remind the world of woman power." Covered or bared, breasts are distinctive, and distinctively female. Their prime position on the body and the unique contour they give it put breasts foremost in the visual lexicon of womanliness. Drag queens fabricate them; butches strap them down. While latex is ephemeral, breasts naturally make explicit a woman's sexuality.

And yet I can't describe Marguerite's breasts in terms of their size or shape. They change with her outfits. They're as varied as her lipstick shades. "A bra can be like bracelets," Rednour helpfully tells us. "I say, 'I'm wearing my tits,' if I'm wearing my push-up, padded bra, because the change in my shape is so obvious. Donning tits creates a dynamic silhouette."

I don't know Marguerite's true silhouette and I don't know her real face. I don't know what the words true or real mean when talking about her. Marguerite wears her lingerie in public, her nipples erect, signifying arousal. Whether she in fact is aroused, though, nobody thinks to ask. Her sexuality is her drag.

I don't mean that Marguerite is sexually manipulative. The femme doesn't trade sex, or even trade on sex, for power. Rather, she turns herself inside-out. Her private parts make a public appearance -- and make for great theater -- outperforming the public vulnerabilities the rest of us can't help but let slip. Marguerite is invincible because she flaunts what she can control, and because, hormones being hormones, it's inherently alluring. The mascara and lipstick with which she paints herself as an object of desire show off her features in place of an expression. Push-up bras overly determine her body language. She can let into her life whom she pleases, with stories about equestrian feats and opinions about literature every bit as engaging as those expressed by people who don't count among their traits omnipotence.

No, Marguerite isn't actually made of latex. She doesn't need to be. When she wears her sexuality, she's impenetrable.