Memo to my Hollywood friends

Don't fund the Gore-Lieberman ticket until we get some answers. 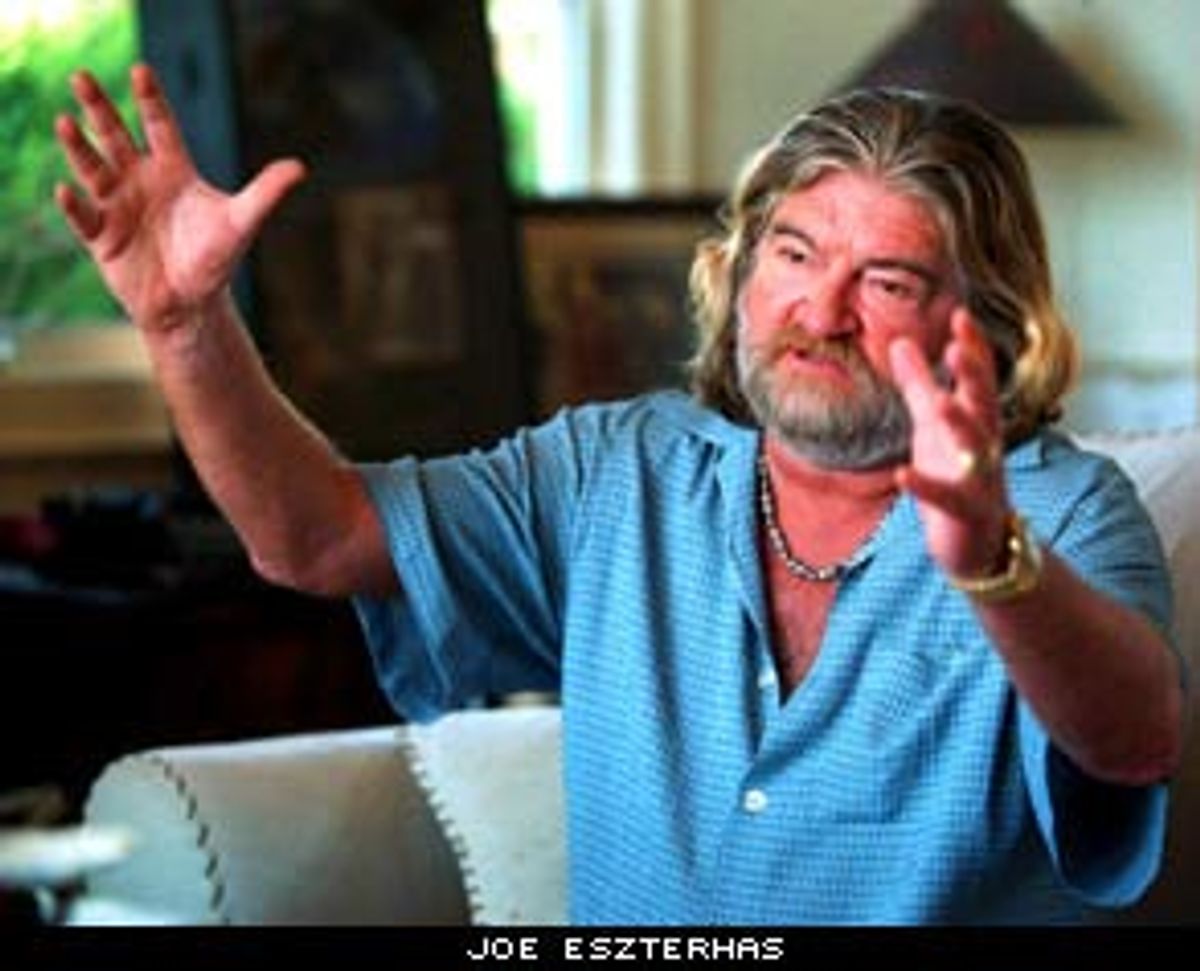 I've written two movies about the poison of anti-Semitism. Pat Buchanan called one of them, "Betrayed," "un-American." I wear his critique like a badge of honor.

But as a writer, who likes pushing the envelope, Joe Lieberman frightens me. He says TV stations' license renewals should depend on the "moral tone" of their programming. He says the Justice Department and the PTA should be used as "prosecutorial agencies" to determine truth in movie advertising. He has awarded a "Silver Sewer" award to "60 Minutes." He says "Friends" should be shown either on late night television or in movie theaters.

He says "Hollywood doesn't know anything about piety." He says studio bosses "mainline murder, mayhem, violence and vulgarity" into the veins of America's culture. He advocates an advertising boycott of daytime talk shows that "make the abnormal normal." He says there is "too much violence, too much sex, too much instability in entertainment." He says, "I love movies, I love television, I'm just asking them to give us better stuff."

What is the definition of those words, and what right does Joe Lieberman, who says he is "increasingly uncomfortable in a secular culture," have to define them for us? Does anyone have the right to impose his definition upon the rest of us?

Is Howard Stern, another recipient of the Silver Sewer award, "vulgar" or is he a brilliant social critic? Is Eminem "abnormal," or the voice of alienated young Americans? Was Lenny Bruce "unstable" or a genius? What is "better stuff"? Who defines it? Lieberman? Lieberman's so oft-mentioned God? And why should Hollywood know anything about "piety"? Isn't Hollywood in the entertainment business and not the God business?

Until now, the threat of censorship in Hollywood has come from the Reverends Robertson, Falwell and Wildmon, who, like Lieberman, style themselves as "cultural warriors" waging war against "cultural polluters." We in Hollywood resisted their threat, most dramatically seen in Rev. Wildmon's attempt to intimidate us with a boycott of "The Last Temptation of Christ." Lew Wasserman of Universal was forced to hire 24-hour security, but Hollywood would not be cowed.

Now all I hear are reasons why Lieberman will no longer attack Hollywood. He's going to stop saying these things, I've heard, because Al Gore is too close to Jeff Katzenberg and David Geffen. He'll change his position, I've heard, like he did on affirmative action. His positions are just a political ploy, I've heard: "We've stolen God from the Republicans." Or -- Yes, he gave Silver Sewer awards to CBS and Fox for their programming, but his wife owned stock in both companies.

I, however, think Joe Lieberman is an honorable man and until he says differently, I take him at his word. I assume he means what he says and I assume that, as a man of conscience, he will try to put his moralistic views into practice if he's elected. And that, since I write the kind of material which is provocative, which can be classified sometimes as sexual or violent, is what frightens me about him. He means it. Just like the Reverends Robertson, Falwell and Wildmon do. They're only preachers. But Joe Lieberman may become the second most powerful man in America's government.

And that raises the fundamental question: Why should we in Hollywood vote or donate money to a man who threatens our creative freedom, our freedom of expression? We stood up to the last guy who tried it (Wildmon) and sent him packing out of town. Now we're going to finance Lieberman, a man who wants to tell us what to put up on screen? As the conservative writer (and Salon columnist) David Horowitz said recently, "If Lieberman were a Republican, there would be a devastating attack against him for being a religious conservative, for trying to impose his morality on us, for being a censor."

Conservative Republicans have attacked us for making movies that show a liberal bias. They have said we are liberal propagandists. Our great unmentionable secret is that they are right. We are. As a director once defined it to me, "We even see it in comedies. Comedies are funny moments with liberal inserts."

We propagandize because we feel a better America means greater freedoms for African-Americans, for women, for gay people. But are we going to sell out the very basis of our other freedoms -- free speech, freedom of creative expression -- because Joe Lieberman agrees with us about all the other issues? Because he believes in a woman's right to choose or protecting the environment or those greater freedoms for African-Americans, women and gays? I ask my colleagues in Hollywood to hold Joe Lieberman accountable for the things he's said about us. The way we held Bob Dole accountable when he trashed us. The way we forced Dan Quayle's retreat when he attacked "Murphy Brown." I say no more money for Al Gore and Joe Lieberman until Joe Lieberman "clarifies" his views about Hollywood. No more money until we are satisfied that the Gore-Lieberman ticket won't mean the curtailment of our creative freedoms.

I ask my colleagues to demand that Lieberman engage us in a dialogue where we can respond to his charges, that he stop ambushing us with sound bites and headlines. And let's demand, in fairness, that the dialogue not be with politically opportunistic studio heads and image-conscious movie stars, but with those writers and directors who make movies with sexual and/or violent content. With those people whose livelihoods and careers Lieberman threatens.

That movie I wrote about anti-Semitism, "Betrayed," the one Buchanan hated, was a brutally violent one. The violence was necessary to show the heinous actions that the neo-Nazis of the farm fields were engaged in. The movie was meant to expose the prevalence and lethal nature of anti-Semitism. It was startlingly, graphically violent. I wonder if Lieberman saw it. I wonder if he approved of what it said. I wonder if he objected to the violence.

The road to censorship is always taken in incremental steps. I am reminded that one of Hitler's first edicts was a ban on what he called "decadent" art. I wonder if he also thought that art "vulgar" and "abnormal" and "unstable."

I am reminded, too, of the critic Kenneth Turan's moralizing recent review of "The Cell" in the Los Angeles Times. He listed some of the movie's plot points and then added this sentence: "Attention, Senator Lieberman." Is that the future of film? A critic appealing to a censor to do something about a movie he finds distasteful?

"None of us wants to resort to regulation," Lieberman said at a Senate Commerce Committee hearing last May. "But if the entertainment industry continues to move in this direction, and continues to market death and degradation to our children, and continues to pay no heed to the real bloodshed staining our communities, then the government will act."

There it is. From Joe Lieberman's lips. "Then the government will act."

What next when he's done with Hollywood? In his book, "In Praise of Public Life," Lieberman bemoans the "Crossfire-ization" of news programming. "It is the news media's version of violent programming, not quite "Natural Born Killers", gangsta rap or the World Wrestling Federation, but, on some news shows, moving disturbingly closer."

Violent news? The news media is next.

Joe Eszterhas is an ex-Rolling Stone reporter, National Book Award nominee for "Charlie Simpson's Apocalypse," and screenwriter of such blockbusters as "Basic Instinct" and" Jagged Edge." His latest book "American Rhapsody" was published by Knopf in July.