"The Original Kings of Comedy"

Spike Lee's low-budget concert movie turns a hysterical night of African-American humor into the hottest little picture of the summer. 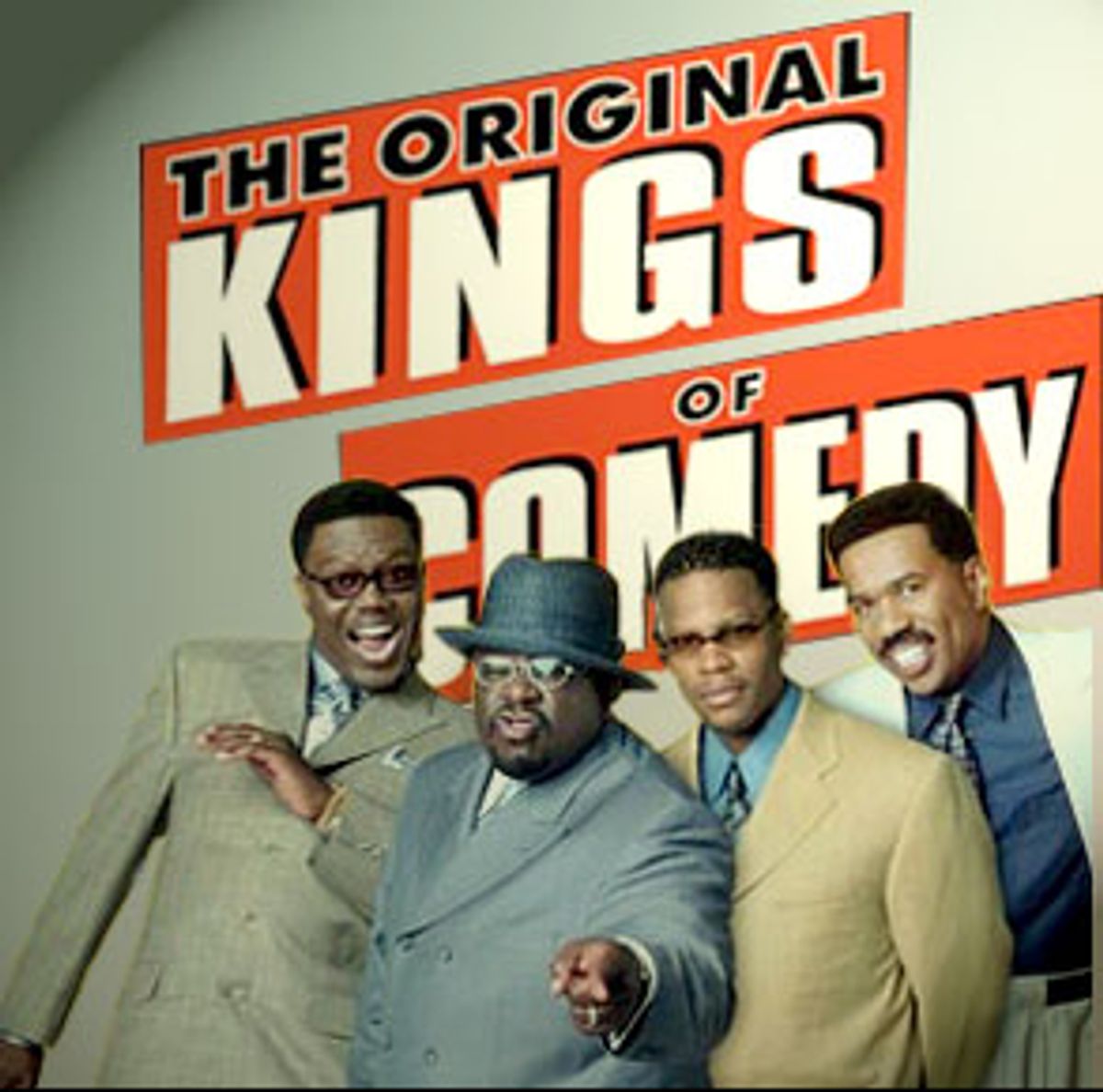 Carrying himself like a terrifying blend of Flip Wilson, Muhammad Ali and Archie Bunker, comedian Bernie Mac stalks across the playground toward the camera as if he's going to swallow it whole. White Hollywood is scared of him because he's an angry black man, he says, nostrils flaring; that's why he doesn't have his own network show. A minute later, however, he is repentant. "I was just playing; I love you white people," he says, his voice almost quavering. "I'll take WB, I'll take UPN. I'll take the USA network."

Next to him on the playground, his pal Steve Harvey sneers, "You'll take the Bernie Mac cooking show on the Food Network."

The multiple layers of irony in this hilarious impromptu monologue -- Mac is simultaneously making fun of white fear and racism, contradictory black attitudes toward success and his own ambition -- may convey a little of what makes "The Original Kings of Comedy" the phenomenon of the moment. This summer has been cool in the Northeast, scorching in the South and West and universally tepid on the movie screen. (The year's two biggest hits, "Gladiator" and "The Perfect Storm," won't have a combined gross anywhere close to that of "Star Wars Episode I: The Phantom Menace.") African-American comedy, on the other hand, is red hot.

Martin Lawrence, still a name and face many non-black moviegoers only dimly recognize, solidified his reputation as a major box-office star with "Big Momma's House," the cross-dressing farce that defied dismissive reviews to bring home $114 million so far. Given the film's modest budget, it might well turn out to be one of the year's most profitable ventures. As expected, Eddie Murphy's "Nutty Professor II: The Klumps" was also a big hit, and will probably end up outdrawing its 1996 predecessor.

That didn't prepare anyone in Hollywood for "The Original Kings of Comedy." This quick and dirty video documentary by Spike Lee, shot last February during a concert tour by four leading black comics, opened a week and a half ago on 847 screens and just about stopped traffic. ("The Cell," by comparison, played on nearly 2,400.) Drawing a remarkable $13,000 per screen, "Kings" was last week's second-biggest hit, leaving such carefully crafted mainstream entertainments as "Hollow Man" and "Space Cowboys" eating its dust.

But the real story, I think, is why the film has struck such a nerve. I caught up with it a week late to discover that it's an extraordinary celebration of black culture, mostly hilarious, sometimes electrifying and occasionally angry. In terms of cinema, well, there isn't any. "The Original Kings of Comedy" was shot on digital video with an eye toward cable TV broadcast, and it looks it. Colors are faded and unnatural, the light is dishwater-gray and the images lack crispness and definition.

Still, Lee knows what he's doing; despite his prima donna reputation, I think he's a supremely adaptable director. Seeing the film in a crowded theater is a lot more fun than watching it on TV would be, and the crappy, grainy look does create a sort of you-are-there immediacy. Anybody who's interested in the direction of contemporary comedy, or in hearing some frank (and hysterically funny) African-American discourse on race and culture, shouldn't miss this movie.

Journalist Joe Queenan once observed that Lee's reputation (in some circles) as an anti-white racist was ludicrous because, as hard as the director might be on white people, he is much harder on blacks. You could say the same for all four of the Original Kings, whose ribbing of the smattering of whites in their Charlotte, N.C., audience is quite gentle compared to the abuse they dish out to black folks. In a sense, this is a declaration of independence. The attitude toward white people seems to be: We're happy to have you here, but we're not really concerned with you; this is our night. Any aggrieved whites who think blacks are a bunch of whiners who constantly complain about oppression and line up for government handouts will find a far more complicated self-image here.

Mac, whose liberated-id performance includes a description of how he started a fight with a 2-year-old girl and the motto for his planned day-care center ("I will fuck your kids up"), offers some mock-solicitous advice to whites in public places. "You might see three or four brothers at the mall or the bowling alley," he explains. "You might hear the word 'motherfucker' 32 times and only two words of regular English."

Cedric the Entertainer (a costar of Harvey's WB show), a beefy, graceful absurdist who might be my favorite of these four, explains that white people like science fiction because they dream of escaping to other planets "and leaving our asses behind on Earth." He shakes his head patiently. "Y'all know, if you goin' to the moon we'll be right behind you," he intones. "In a space shuttle with a Cadillac grille, one headlight broke and the tags all wrong."

If Mac is the angriest of these performers and Cedric perhaps the gentlest, D.L. Hughley (star of "The Hughleys" on ABC) is the most predictable, mining the familiar dirty-underwear and embarrassing-sex terrain of generations of black comics before him. Still, his timing and delivery are brilliantly honed and his material often has a political edge. Blacks, he says, avoid "extreme sports" because they have their own versions: "I'm gonna drive past the police and try not to get my ass whipped. I'm gonna fill out this loan application and lie about 50 times."

For all the satire directed at black folkways (Cedric on ghetto nicknames: "I'm a grown-ass man. I ain't gonna call no other dude 'Delicious'"), "Original Kings" is most extraordinary when it transcends its gags in pursuit of something bigger. Acerbic host Harvey (of the eponymous WB show) himself provides a few scathing routines, as in his complaint about white people who nervously enumerate the blacks they've had over for dinner:

"If you know how many niggers been to your house, you racist like a motherfucker." Hip-hop concerts, he says, involve too many instructions: Pump it up, wave your hands in the air, scream. "Motherfucker, for what? I paid $38.50. You scream!"

Harvey's finest moment, however, comes in a lengthy tribute to old-school R&B, when he summons up the spirit of his 1974 Cleveland high school and gets an entire arena full of people on their feet to vintage hits by Lenny Williams, Teddy Pendergrass and Earth Wind & Fire. Suddenly it's no longer an evening of comedy but an authentic emotional experience: a revival meeting, vaudeville show and house party, all in one. This seemingly artless movie becomes downright magical, and Lee half-accidentally finds something even his best films have struggled with: a portrait of black culture as a mature and highly complex world, comfortable enough with itself to talk some shit in public.