Wine cake is my take on motherhood and life. 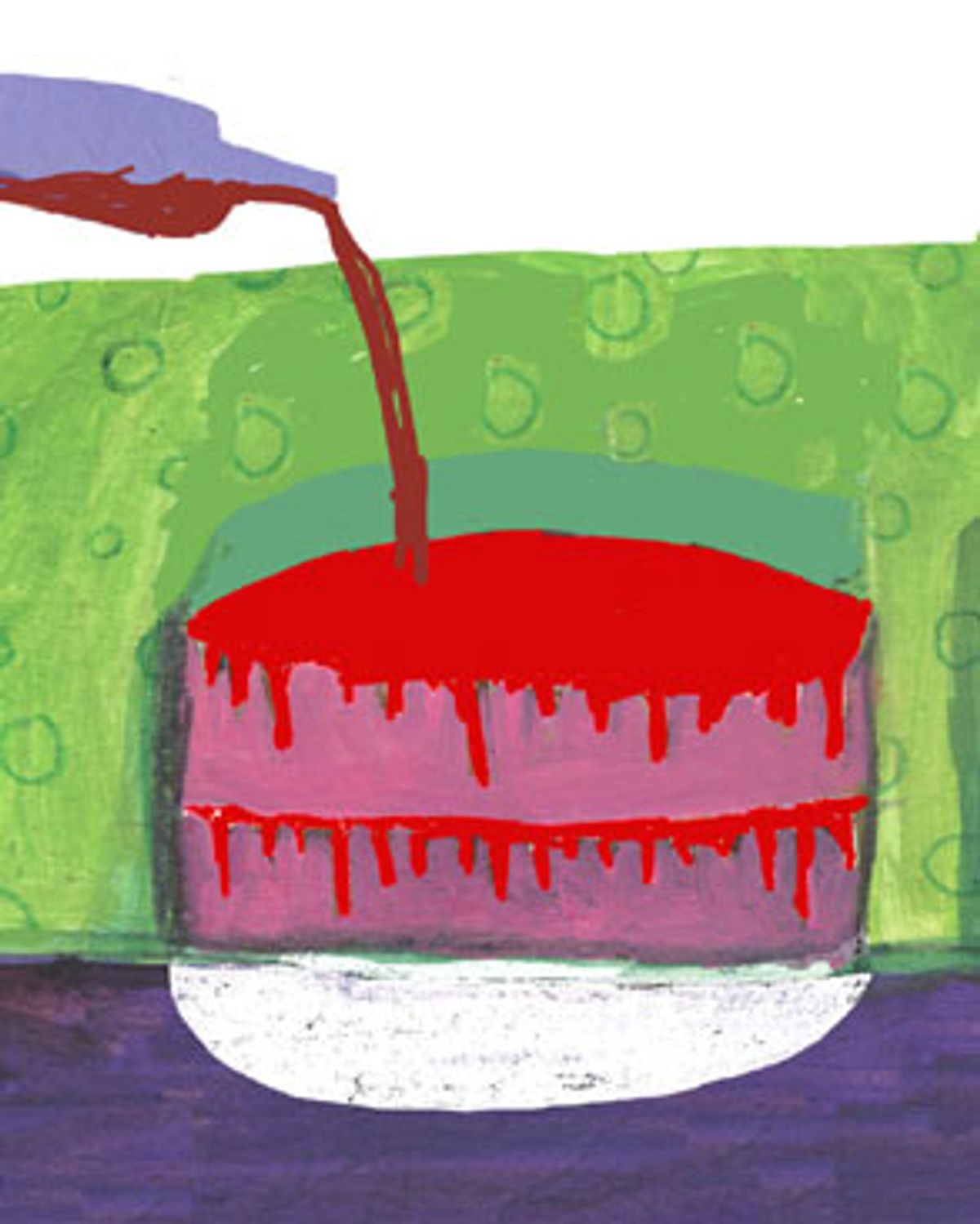 Countless times during the year, I put a bowl down on the kitchen floor and my three daughters help me lick the remnants of rich yellow batter. Yes, it contains raw eggs (four) and cream sherry (17 percent alcohol by volume). No, I'm not trying to fly in the face of sensible motherhood. We take enough off our fingers and spoons to get a taste of my version of life: Past cool. Don't be afraid. Always say thank you.

I make wine cakes for everyone. I can't even tell you how many of the rich fragrant little loaves we give away, because we make them all the time. At Christmas, we make about 50. In July, we gave away a few to people who hosted us for dinner at a writers' conference in Arizona. A few months ago, I made a big one for my brother, who'd just cut himself on the stomach with his chainsaw while decimating a dead orange grove for firewood. He was probably working while -- while fueled. Liquidly, perhaps pharmaceutically.

My version of alcohol intake is wine cake batter. I don't drink. Not because of any grandiose moral vision of the world, but because I did all my serious drinking when I was 13 and 14. Three friends and I graduated from dark German beer lifted from one girl's garage to cheap Strawberry Hill wine to wanting the hard stuff.

That's when my friends talked me into helping them load up a giant yellow Tupperware bowl with topped-off half-cups of hard liquor stolen from the more unaware parents' households. (Not my parents, both immigrants who were very aware of everything. My mother could tell if I'd been walking with someone who smoked.) We mixed tequila, vodka, brandy, whiskey, rum and gin in the big bowl and added cherry Kool-Aid so that we could drink the foul stuff. I looked at the red liquid and thought, "This is not sangria. I don't know what we're doing here."

I'd brought nothing to contribute. I'd cautiously checked my parents' cupboards, but they drank wine with dinner, sangria at those backyard '70s parties on our block, and nothing else. There was a dark bottle of cream sherry my mother used when we made wine cakes at Christmas. I studied it. "Alcohol 14 percent." That didn't seem impressive enough for the Tupperware bowl.

Suffice it to say that I tried the mixed drink we'd concocted. And a strange combination of my genetic tolerance for alcohol and my fear of losing control (and being late to get home and do required housework) was such that nothing happened to me. Nothing. I was the friend who tried to keep the other three from getting into custom-painted vans with older guys, who tried to keep us walking on the sidewalk, who cleaned up the mess when my best friend got sick all over her bathroom all night. Then I'd walk home at 7 a.m. and go clean my dad's office.

And suffice it to say that I quit drinking the following year, after being busted with only one can of beer by my parents. My dad told me I could get pregnant after drinking only that can of Olympia. (I wondered what sex-education class he'd been to.) But I was grounded for so long that my friends forgot me.

Now, I have not forgotten them. One lives in a Salvation Army shelter. I think about her nearly every day. She has four children, none of whom live with her. I have three daughters, who will have friends whose parents do not watch their liquor cabinets, whose parents will undoubtedly have much worse things available in their homes than cream sherry.

It's the cream sherry bottle in my cupboard that I take down frequently, when we get out the old recipe from my mother. We'd made hundreds of cookies over Christmases, and yet, wine cakes were different; they were easier to wrap up in red plastic, and everyone loved them, asked for them. My girls watch me pour the wine into the orange ceramic bowl and then we turn on the ancient mixer and work. We are past cool.

We take wine cakes to major book festivals, where we present them to editors and organizers who've worked hard to make events happen. We think it's funny when people look at us in disbelief. The country folks from Riverside, Calif., bringing homemade baked goods to pass around while everyone else is sipping bar-mixed drinks and talking about literary things. We laugh. We give a wine cake to the caterer, too. We give a wine cake from this same batch to my brother, out in his orange grove, riding his motorcycle with our old dishwasher chained behind it, for fun, after his stitches. My girls know that giving food is past cool.

We give a wine cake to Mr. Bama at the ExpressLube, who helps me take care of my car now that I'm a single mother. Mr Bama gets wild and throws things toward the end of the day, but he's nice to us. We give wine cakes to our letter carriers, who brave pit bulls and people who steal the mail right off their Jeeps for welfare checks to cash, who brave everything to bring me mail, which might include money. (Writers love mail.)

We give wine cakes to our neighbors, who helped us chase off a methamphetamine-fueled bad man renting the house next door to us. (Actually, my brother and his chain saw were the backup for that one, too. I owe him another wine cake.) I give wine cakes to my co-workers, to all my daughters' teachers, to elderly women from Louisiana whom I've known since I was little and to male relatives by blood and by marriage who drink enough beer to fill rivers.

Lots of people ask me for the recipe, and of course, they're shocked that nothing is from scratch, that it's a totally cheesy, easy recipe from the '70s. I've given it to an elegant Italian friend from Arizona, a Mexican-black relative famous for her own cooking, a Texas neighbor and friend who now makes 50 wine cakes of her own every year.

Juli, born in a tiny Texas town, fierce and funny and great help in chasing off speed-freak intruders, is a wine cake devotee who actually found this same recipe at the capitol in Sacramento, Calif., in a cookbook featuring the recipes of California governors' wives. She couldn't wait to show me who'd contributed wine cake: Nancy Reagan. Of course, Juli laughed and said she wondered who'd given it to Mrs. Reagan. I had to ask my mother where she'd gotten hers. As with everything I ask her about my childhood, she says she doesn't remember.

When Juli and I decided to make a joint batch at Christmas, she proudly brought over several boxes of yellow cake mix she'd gotten at a huge discount at Pic-N-Save. She likes to teach my girls about bargains. I like to tell them about alcohol, about how it bakes off and evaporates in the oven, and they peer at the condensation on the oven door, wonder if that's dangerous. They discuss people we know who drink. I wield the mixer.

However, this odd, discounted cake mix was from Russia, somehow, and all the box writing was in Cyrillic. We mixed, I smelled and I swore the yellow was lemon. Who knew? She gave the lemony ones away, and no one complained. Her grandmother, 76 and still in Texas, asked for the recipe, but she makes her own wine, so she does some substituting. Grape wine, instead of cream sherry, in her version. Wine cakes all over the country. Way past cool.