British photographer China Hamilton portrays women as strong, independent beings -- even when they're tied up -- in his book "Woman." 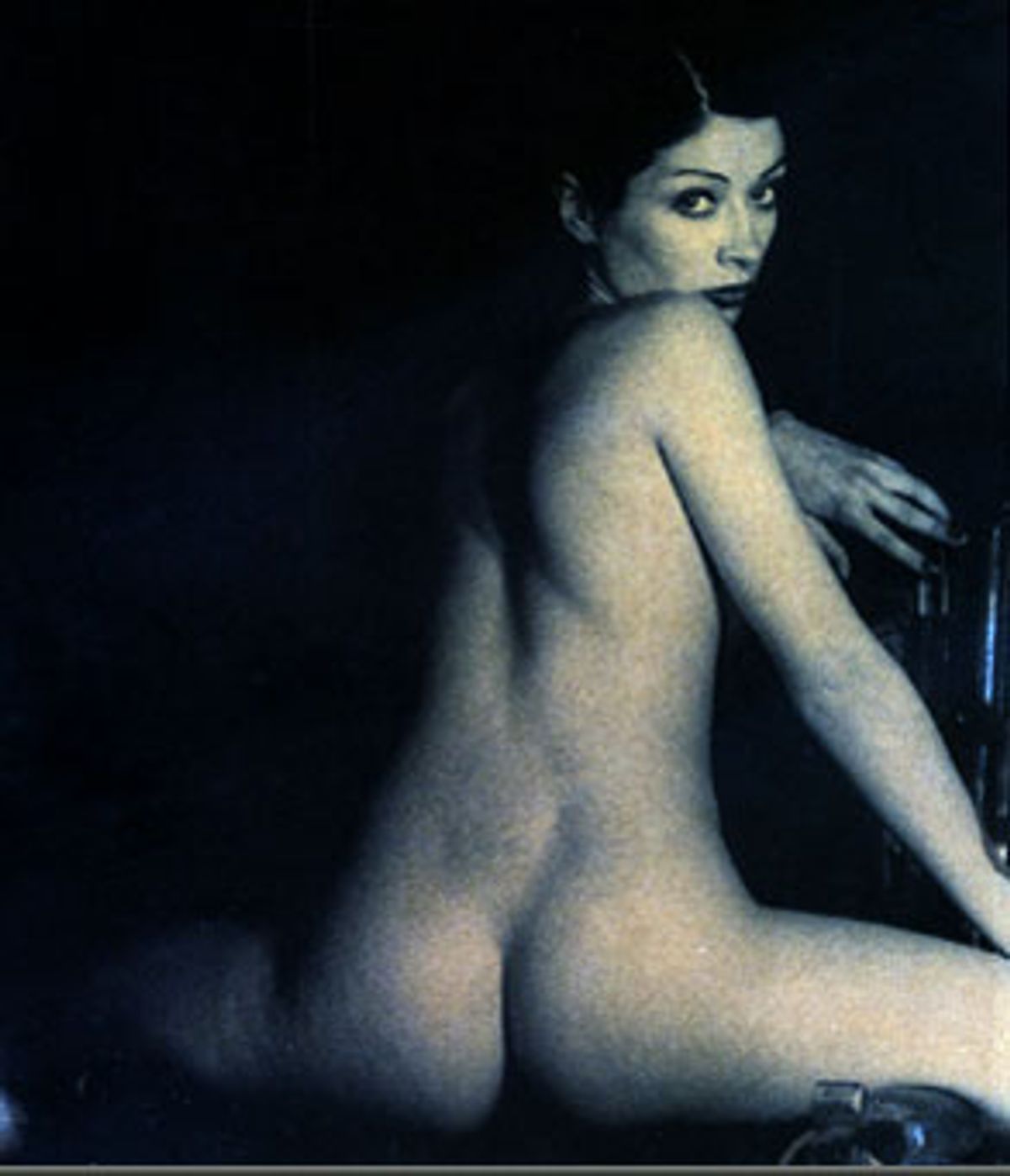 Gloria Leonard, former publisher of the flesh rag High Society, once quipped that the only difference between erotica and pornography was in the lighting. That formula holds true, though erotica often seems like an endangered species these days. From magazine racks to video stores and the Internet, we are constantly awash in well-lit, ultragraphic smut. It's as if the entire world were perpetually on the brink of being swallowed by some gargantuan snatch box. Not that I'm complaining, mind you. I can conceive of worse fates.

Still, there's something to be said for subtlety, if only for a change of pace. I appreciate a roll in the raunch as much as the next fellow, but the gynecological explicitness so much in vogue leaves one craving more refined ocular escapades.

Perhaps this is why I find British photographer China Hamilton's "Woman" such a treat. In "Woman," Hamilton, 54, presents a carnal smorgasbord consisting of his wife, his lovers and his friends in a variety of alluring poses. Of course, when it comes to subject matter, there's nothing new under the sun of Satan. Rather, it's Hamilton's antiquarian style that appeals to me. Through elaborate processes, Hamilton has tinted and treated each of these monochrome photos until the woman's form is bathed in burnt red, cyan blue, dull silver or a light xanthous brown. The result is a throwback to Victorian postcards or vintage painted daguerreotypes.

"My job is to touch the mind, even the heart, but not the genitals," Hamilton writes in his introduction. "Artists must challenge. But they must do so with grace and beauty."

Grace and beauty are, for the most part, Hamilton's watchwords. Even when he's presenting a startling photo, say, of his wife wiping her mouth with a napkin while a large phallus lies on a plate before her, or of a submissive, nude femme bent over while being caned, you seem to be imbibing the very essence of Old Europe.

The red, Chinese block letters he adds as accents and the wistful captions, such as "Consider your mouth upon me" or "Teach me sweet Master," transport you to that world of aching, concupiscent sexuality one finds in thick 19th century novels penned by "Anonymous."

Not every image in "Woman" works for me. I've never been a big fan of S/M. Those who are get a generous dose of whips, chains and women in pain -- though Hamilton's published work is pretty tame compared with what you see in fetish mags like Skin Two or Taboo.

I caught up with Hamilton while he was at the thatched cottage in the countryside he shares with his wife during the week. On weekends, he travels to London and visits the "darkest clubs" of the city with one of his lovers. Crikey, some gents have all the fun.

At age 11, using a Kodak Brownie camera which I still have. Later, I spent four years at Croydon College of Art and Design in London, were I specialized in life drawing from the nude, photography and graphics.

How do you achieve the distinctive, almost old-fashioned look your photos have?

My photos have to exist as individual pieces like a painting or a piece of sculpture. As I have evolved so has the darkness of my work and of my mind. But I always see each piece as a portrait of the subject, never the model, for my women are people I know -- lovers and friends.

I have developed many original processes that permit me to intervene in the print to achieve this value and archival quality, often at great cost to my health due to their toxic nature. They range from a perfect monochrome print enhanced with bleaches and selenium to papers reacted with ultraviolet light and hand-painted on with chemistry to evoke colors and effects. I also use my own formulas of sensitizer that permit me to make pictures on fine, handmade watercolor paper. And I have a range of work with a secret process that enables me to make pictures directly onto oxidized copper sheets.

One of your favorite themes is the female bottom. In fact, your other book, "A View From Behind," deals with it at length. Can you comment on the fascination?

Punishment is another one of your recurring themes. Why is that? Is it a subject of interest in your personal life as well?

Though S/M and B&D are labels, they contain in them much of the human experience of the erotic. Few with any sexuality do not touch on one facet or another in their normal sexual experience. In extreme, they are the dark forces of sexuality, and even in the most normal and loving sexual act there is always something of these. I touch it often in subtle ways, but much of my work is too explicit in these areas for normal bookshop publication. As the Japanese obsession with bondage has shown, it can have a compelling beauty. In my own world, I move with happy freedom between the gentle sexuality of lovers to the darkest moments of consensual fantasy.

Can you give me an example of some images you've created that are "not for publication"?

A woman hanging by her breasts in an iron clamp, or another with rat traps clipped to her labia -- I have produced pictures of both and much more. To many they would be extreme and disturbing, more so because I impart a creative edge that will confuse. But to me they are quite normal, and to the subjects of the pictures, an expression of their real worlds, something quite beautiful and as sensitive as the most delicate touch of a lover -- for such experiences will almost always be at the hands of their lovers, male or female. Yet in my mind my most extreme work is that which is far from so obvious, pictures that contain latent darkness, possibilities that go unanswered.

Do women ever object to your images? How would you respond to the whole "that's demeaning to women" camp?

It is rare to get extreme adverse reactions to my work from women, but that is perhaps due to the circle in which I move. I usually get the reverse reaction: interest, excitement and a desire to share fantasies and to do wicked things for me to photograph. I turn down, very gently, 99 percent of offers.

I think the whole "demeaning to women" argument is totally spurious. Real women, interesting women, dominant women, independent women, women who dictate their own sexuality -- they see even bad pornography as valid. Most women pose for money or because it excites them or both. Some women I work with are sexually submissive and into masochistic submission, but that's their sexual taste. In their normal lives, they are always the most dominant and self-assertive. My dear wife, for example, is a top executive for a powerful multinational and has control over budgets of hundreds of millions of dollars per year. She just spent her day flying to lunch in a helicopter. Submissive, hardly. Women are who they want to be in my work. It's their choice, and they love what I produce. I could not demean those I love and admire so much.

What's the origin of your name?

Many years ago my wife decided on "China" and I took her surname of Hamilton. It has proved a lucky name and is now very much me.

Is there any connection to those Chinese woodblock prints in your photos?

I have always loved "chops" on Chinese pictures, like ring seals on important documents of state; they blend with "China" and are written in Mandarin. People love them. Art, especially comparatively small art, should be given value and importance by its packaging, as one would do with a fine jewel.