The politics of lynching

A photography exhibit on the once-common horror misses a key part of its legacy: The federal government's hands-off policies. 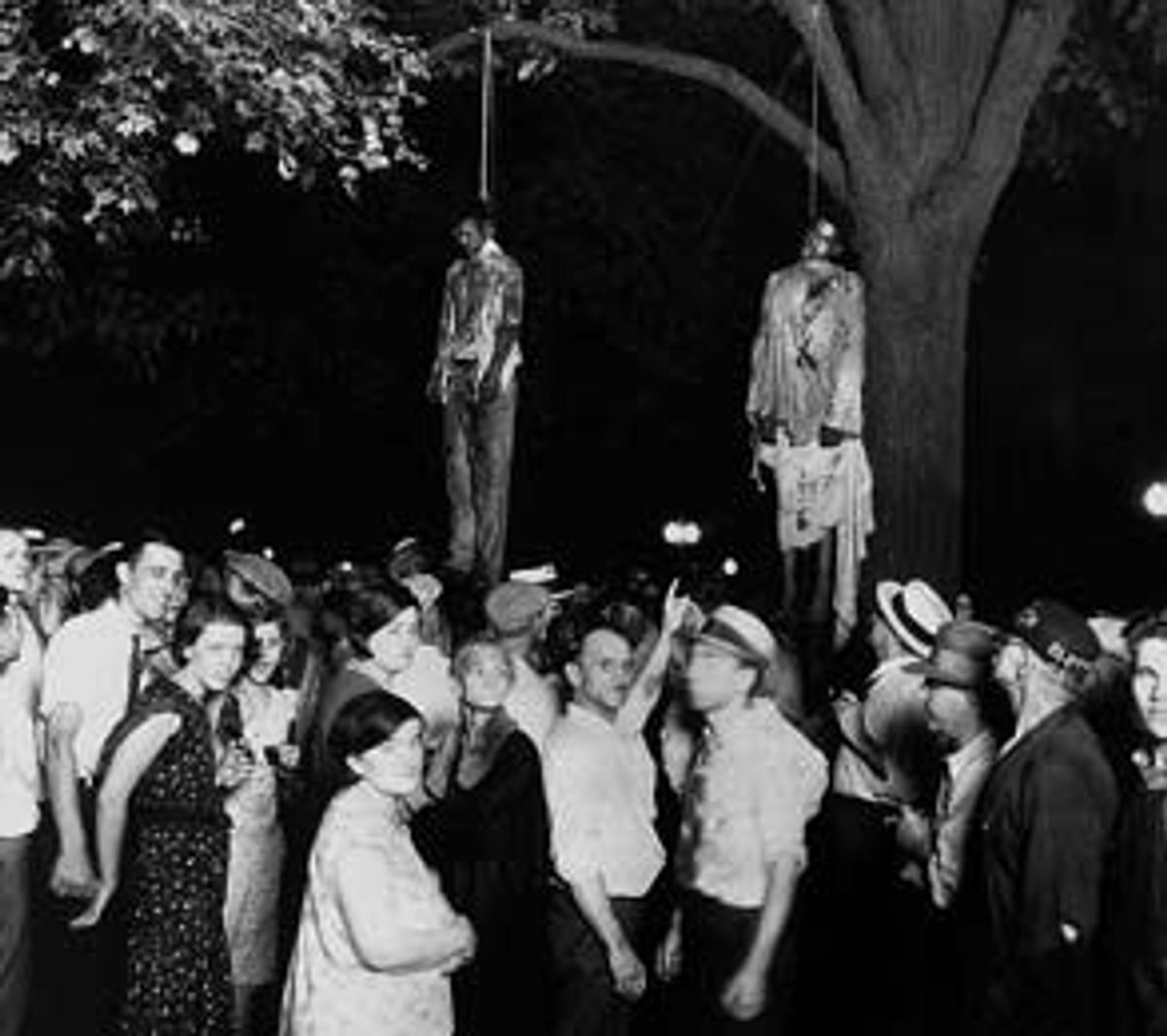 Compulsive collector James Allen has single-handedly revived a new debate about an old topic: lynching. Allen's macabre one-man exhibit of photos of black lynching victims, also captured in his book "Without Sanctuary," has inflamed blacks and whites who see it. Mostly they rail at the barbarism and sadism of the Southern white mobs almost always responsible for the crimes.

But their anger is misdirected. The real blame for seven decades of lynching lies with the federal government. And the hidden history of the way federal officials looked away from the scourge of lynching -- even after NAACP leaders and other blacks documented the abuse -- needs to come to light, because it colors the current debate over the federal role in prosecuting hate crimes and police violence.

The 68 gruesome pictures Allen displays in his New York exhibit show black men and women being burned, dragged in chains, roasted alive and dismembered while whites crack jokes and mug for the cameras. According to official NAACP figures, between 1890 and 1960, 5,200 blacks were burned, shot or mutilated by lynch mobs. The horrid death toll is almost certainly higher, since in many cases sheriffs and local officials didn't deem the murders significant enough to report.

But federal officials were well aware of lynch violence. Most lynch murderers made no attempt to hide or mask their acts. They took out ads in newspapers and circulated flyers announcing lynchings. They ignored the 1908 ban by the U.S. Postal Service on violent material in the mails and conducted a brisk trade in souvenir postcards and letters with snapshots of lynched victims.

NAACP officials meticulously compiled photos of lynchings, collected witness statements from law enforcement and public officials, even the lynchers themselves, and promptly turned the incriminating documents over to federal officials. But they took no action. The NAACP also relentlessly lobbied Congress and the White House to pass an anti-lynching law. The civil rights group was ignored.

Presidents, attorneys general and federal officials wailed that their hands were tied, because it was the job of the states to prosecute the lynch murderers. But the states refused. Fewer than 1 percent of the murderers were ever tried in state courts. Rather than risk alienating politically powerful Southern state officials and jeopardizing votes and legislative support, the feds rationalized their hands-off policy toward lynching with a narrow and rigid interpretation of the federalist doctrine of separation of state and national power.

This was a face-saving political cop-out. In many cases a bevy of Southern sheriffs, mayors and municipal and state officials openly aided and abetted the lynch mobs. The Justice Department had two powerful legal statutes to go after them. The statutes authorized prosecutions of public officials and law enforcement officers who, acting under color of law, committed or conspired with others to commit acts of racial violence. They were based on the 14th Amendment's due process and equal protection clause.

These statutes were expanded under Reconstruction-era civil rights laws passed in the 1870s -- specifically to punish racial attacks against blacks. But they were repeatedly challenged by local and occasionally federal officials as poorly worded, unconstitutional violations of states' rights. Even though they remained on the federal books, federal officials rarely used them to prosecute lynch murders.

By contrast, the White House and Congress did not bat an eye in passing and enforcing legislation that widened the jurisdiction and broadened the power of the FBI and the Justice Department to prosecute crimes such as bank robbery, kidnapping, illegal weapons violations and carjacking. Congress and the White House made few claims that these laws violated states' rights or infringed on the Constitution.

The hideous legacy of the near-century-long federal hands-off policy toward lynching is the current reluctance of U.S. officials to vigorously prosecute racially motivated hate crimes, let alone police violence, against blacks and Latinos. Federal officials still argue that it is the responsibility of local officials to prosecute these crimes. They will not intervene unless there is a compelling federal interest. But they've never bothered to spell out what that means.

In practice, federal intervention in hate-violence cases is almost always measured by the yardstick of political expediency. Attorneys general usually will not authorize investigations and prosecutions of police violence or racist terror acts unless civil disturbances occur in cities or following mass national protests. The beating of Rodney King by Los Angeles police officers and the torture of Abner Louima by New York police officers are textbook examples of this. It took riots and mass outrage for federal officials to prosecute the cops.

James Allen deserves much praise for exposing the shame and disgrace of lynching. The tragedy is that American presidents and the Congress never shared the horror experienced by the Americans seeing Allen's photos today. Until federal officials publicly admit their complicity in lynch violence, it will remain the federal government's dirtiest racial secret -- one that many blacks know about while whites remain ignorant of it, contributing to racial tension and misunderstanding that persists today.