Jewish Americans sometimes have a hard time telling the difference between discomfort and discrimination. 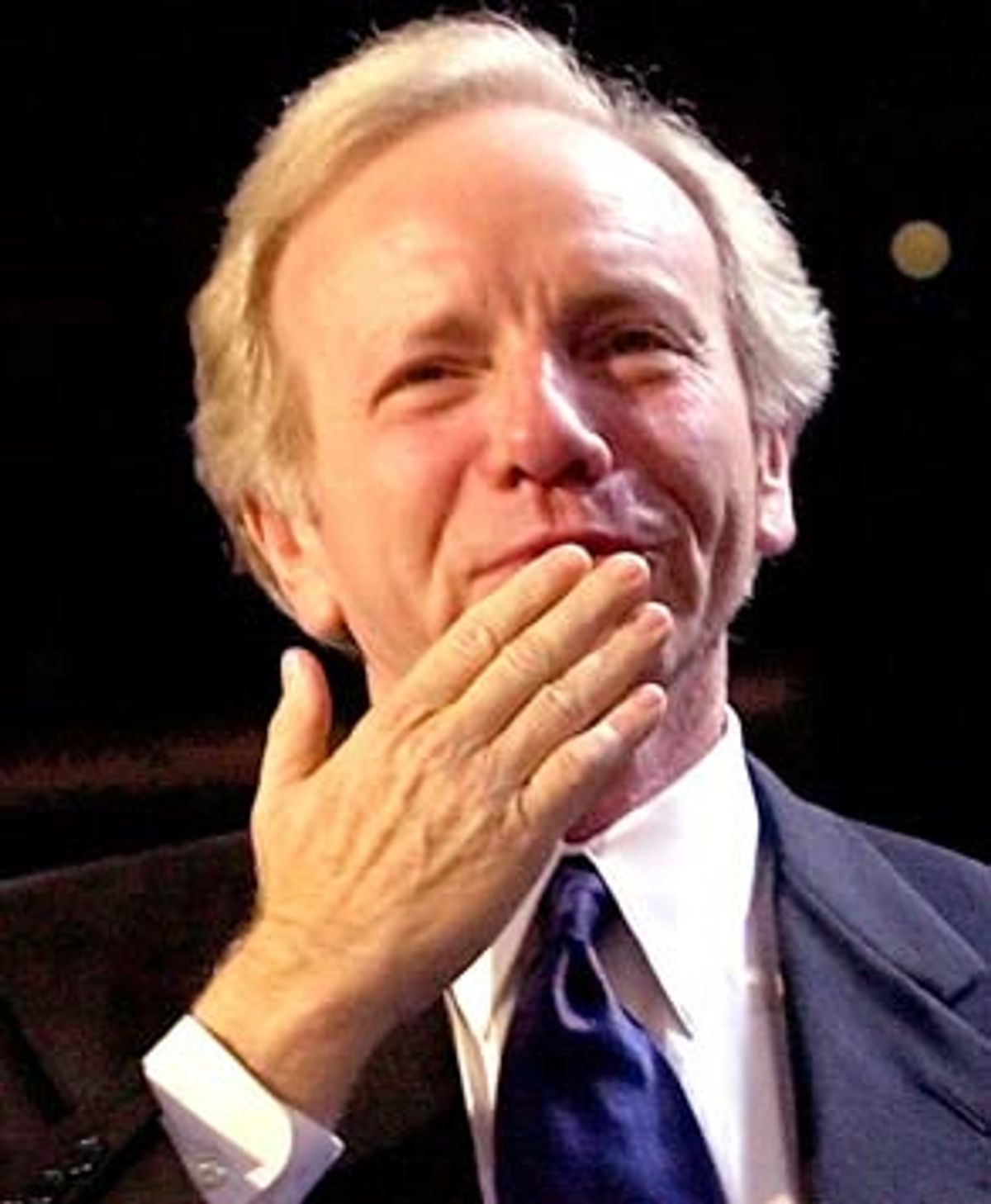 On the eve of the High Holy Days last September, long before Sen. Joe Lieberman became the Democratic nominee for vice president, the Southern Baptist denomination issued its faithful a guidebook on how to convert Jews. It suggested befriending, praying for, even loving the "lost sheep of the House of Israel." The strategy managed all at once to be insulting, arrogant and naively well-intended, and it showed no sign of making any more headway with the chosen people than your basic street-corner evangelist with his Bible and tambourine.

But much of American Jewish officialdom reacted as if the Inquisition were imminent. The Southern Baptists betrayed an ignorance that "these sorts of statements throughout history are associated with coercion, hatred and violence," declared Rabbi Eric Yoffie, president of the Union of American Hebrew Congregations, a Reform Jewish body. Abraham Foxman, the national director of the Anti-Defamation League, contended the campaign "projects a message of spiritual narrowness that invites theological hatred."

Historically speaking, these fears were terribly well-grounded. In America, especially postwar America, they bespoke an almost deliberate myopia, an inability or outright refusal to distinguish between discomfort and discrimination, much less persecution. And so it's worth remembering the Southern Baptist episode as the Anti-Defamation League, and many Jews privately, have lately criticized Lieberman's many references to God and religion as he stumps for election.

There is a seeming irony, of course, in the fact that the words of a fellow Jew rather than those of two born-again Christians, Al Gore and George W. Bush, have inspired such tremors among Jewry. The perversity vanishes, however, if one understands that what the ADL and the less-observant majority of American Jews are expressing is less concern about the abstract principle of separating church and state than a concrete fright that any conflation of religion and governance is bound to lead to anti-Semitic backlash.

The long view of Jewish history and theology supports this anxiety. While Christianity considers its mission to be evangelizing the world, Judaism since antiquity has refused to proselytize. A rabbinical aphorism holds that any prospective convert should be turned away from the synagogue door three times. It is supposed to be difficult for outsiders to learn and embrace Judaism.

During 2,000 years of exile, Jews attempted to live safely in their adopted gentile countries by a combination of passivity and utility. Biblical writings, like those of the prophet Jeremiah, urged Jews against insurrection, saying, "Seek the welfare of the community in which you live, and pray for it, for in its welfare will be your peace." Jews played the roles of court physician, banker to the crown and provisioner of the army in order to prove their value and loyalty to various regimes.

Only during a few relatively golden ages -- Moorish Spain from the ninth through 12th centuries, Poland during much of the 1400s and 1500s -- did these approaches succeed. And even those successes ended in reversal and tragedy, be it the Spanish Inquisition or the wave of pogroms in Poland. The Jews most ruthlessly tortured in Spain were the Marranos who had tried to protect themselves by adopting Christianity. The Holocaust simply raised ancient hatred of Jews to a modern, technological standard.

So the most favorable interpretation of the current disquiet among Jews amid all the God talk of the presidential campaign is that it arises from a deep, anguished reservoir of collective memory. When polls show Jews are twice as likely as gentiles to endorse a "high wall of separation between church and state" -- 86 percent to 43 percent in a recent report by InterSurvey -- they are speaking out of a history in which Christian and, more recently, Muslim regimes inevitably persecute Jewish minorities.

But how does that fit in the American experience? The answer is that it doesn't. Or it does only if the Christian utterances and actions that emotionally isolate Jews can be considered precursors to verbal and physical attack. And that is a rather dubious premise.

Certainly, America has endured its own ugly history of anti-Semitism, from the lynching of Leo Frank in Georgia earlier this century to Buford Furrow's fusillade at a Jewish community center outside Los Angeles last summer. Until the 1950s, a pattern of entrenched, institutionalized anti-Semitism enforced strict quotas on Jews in Ivy League colleges and barred them entirely from elite social clubs, law firms and neighborhoods.

It is also true, however, that America granted Jews political equality from the birth of the republic and began electing Jews to offices as high as the Senate in the mid-19th century. After the spectacle of the Holocaust destroyed any illusion that anti-Semitism was a socially respectable attitude, the barriers fell rapidly. Which brings America to having 34 Jews in Congress, some from states as heavily gentile as Oregon and Minnesota, and an Orthodox Jew on the Democratic presidential ticket. The intermarriage rate for Jews, a barometer of the most intimate kind of acceptance by gentiles, tops 50 percent.

Logically, the fear of anti-Semitism should be falling along with all the former impediments to Jewish progress. The opposite, sadly, is true. The journalist J.J. Goldberg points out in his trenchant book, "Jewish Power," that as the existence of anti-Semitism declines in America, the perception of anti-Semitism as a threat by American Jews rises. Goldberg calls this disjunction the "perception gap."

The Anti-Defamation League, which led the outcry against the Southern Baptists a year ago and leads it against Lieberman now, typifies what is known in the Jewish world as a "defense organization" and a theory of organizing that one might call the "crisis model." It exists, in other words, to rally American Jews to protect their brethren from harm. The prime examples of the crisis model in action came amid the Six Day War in 1967, when American Jews poured forward as never before with donations and volunteerism on behalf of Israel, and during the campaign in the 1970s and 1980s to rescue Soviet Jewry. The nature of a defense organization is to constantly track and seek threats to Jews -- and, let's face it, there have usually been plenty.

But what happens when larger crises subside, when anti-Semitism belongs not to a government or a powerful class of bluebloods, but to the lunatic fringe? In the ADL's case, it beats the same warning drums anyway. Earlier this year, the organization released its list of the top 10 issues and events that affected American Jewry in 1999. Seven of the 10 involved anti-Semitism or the Holocaust. Nowhere was there any reference to the vitriolic debates within the Jewish community over pluralism and continuity.

However, Jews' queasiness over Lieberman's God talk may be traced to the fear that religious rhetoric in a political campaign will loose the demons of hate. His frequent references to God, morality and divine purpose do not even encroach on the division of church and state. He is not imposing a religious action on the part of Washington, as mandatory school prayer did until the Supreme Court struck it down. His oratory does not get into nearly as muddy an area as George W. Bush's declaration of "Jesus Day," a celebration of one specific religious tradition, in his capacity as governor of Texas. If people dislike Lieberman's free speech, they can vote against him. Already the justifiable complaints that he was dismissing the possibility one can be non-religious and moral -- or religious and immoral -- have caused him to concede the point.

What God talk does do to the vast majority of American Jews is make them squirm. Coming from an Orthodox Jew like Lieberman, it reminds the secular and less-observant Jews yet again of how a vibrant, confident Orthodox community exerts influence well beyond its 7 percent share of the American Jewish population. Coming from Bush or any other gentile, invocations of Christian faith reinforce the reality that American Jews form but 2 percent of the nation, a tiny fraction, and that no amount of intermarriage or ecumenical goodwill can make virtually any Jew accept Jesus as the messiah. Discomfort may refresh Jewish memory of the horrifying past; but the discomfort of existing in a polyglot democracy is far, far from a threat to raise that past from the grave.