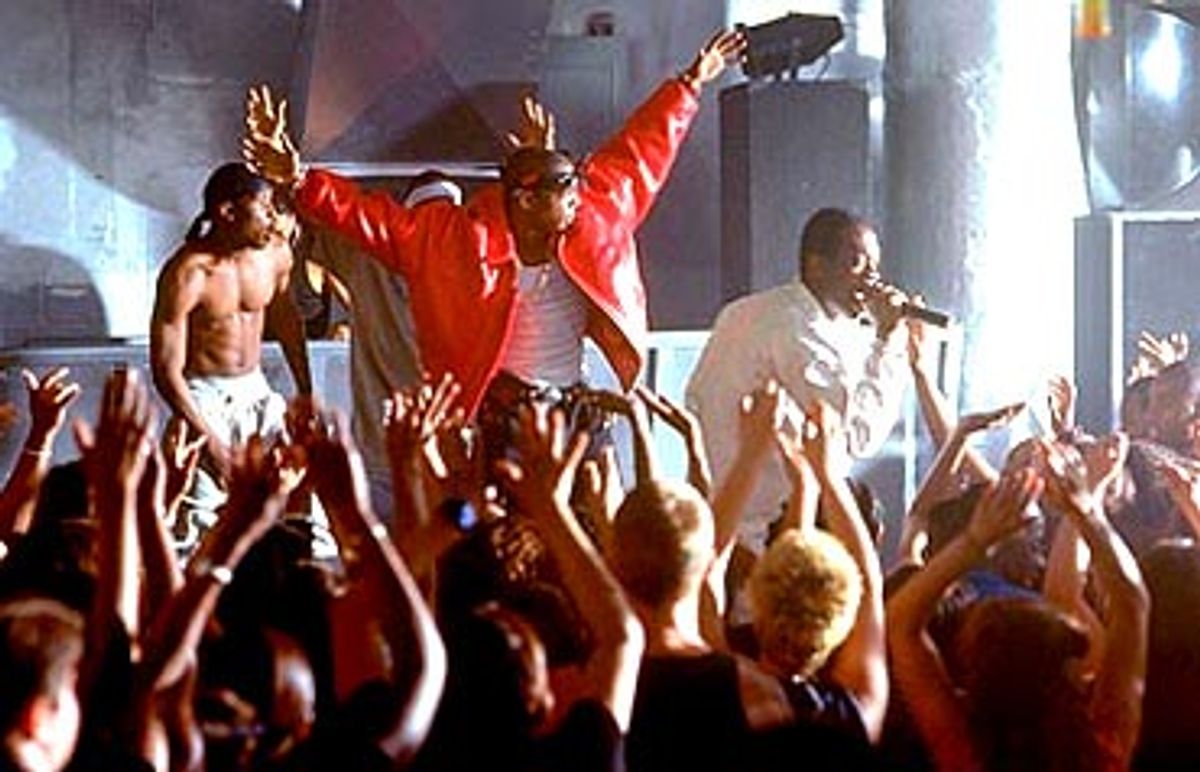 "Turn It Up" isn't slick and insincere the way most American movies are, and that's about the best thing you can say for it. Instead, this awkward fable of ghetto redemption mixes painfully earnest message-delivery with occasional scenes of brutal violence. Starring rappers Pras and Ja Rule, it's such an obviously amateurish production -- albeit one with its heart more or less in the right place -- that it's no fun to beat up on. At least "Under the Cherry Moon," another music-industry vanity vehicle for Prince (and, unhappily, the obvious point of comparison), was hilarious in a pretentious, faux-arty mode. "Turn It Up" is just a well-intentioned, second-rate indie film that should never have gotten widespread distribution.

Pras (also known as Prakazrel Michel), the talented rapper and entrepreneur who stars as aspiring Brooklyn rapper Diamond and who also co-produced the film, should probably be commended for his ambition. Hip-hop veterans like Ice Cube and Ice-T have parlayed their long musical careers into modest success as Hollywood actors, and the time is right, theoretically speaking, for a rising young rapper to vault into big-screen stardom.

It's just possible that Pras, a former member of the Fugees with something of the leonine elegance of the young Patrick Ewing, can become an actor. And first-time filmmaker Robert Adetuyi, who knows how to move the camera and has a facility for morbid shootout scenes in the Peckinpah-Tarantino tradition, clearly has the potential to become a decent director. But the two of them together, in this context, doesn't work at all; only Pras' most enthusiastic fans will find much to enjoy in this tepid experience, which can't knit a handful of decent moments into anything resembling a real movie.

This is a story that's been told umpteen times, and most of the umpteen are a lot better. Diamond, a loping, likable guy with a faint Caribbean lilt to his speech and a mellifluous rap delivery to match (Pras is Haitian-American), dreams of becoming a star and getting his mom out of the Brooklyn ghetto. His best friend and manager, Gage (fellow rapper Ja Rule), is fiercely loyal to Diamond but is also a hotheaded thug whose dimwitted criminal schemes threaten to derail their plans. Add a girlfriend (Tamala Jones) who wants Diamond to go straight, an estranged dad (Vondie Curtis Hall) who wants to make amends and a cockney drug lord (Jason Statham) who seems to have wandered in from the cast of "Trainspotting," and you can probably fill in the details from there.

To raise the money Diamond needs to record an album, Gage goes to work for the nefarious Mr. B (Statham) and winds up semi-accidentally borrowing $100,000 from his employer. Oops! Curiously, after Gage is severely beaten and almost fed through a meat slicer, he appears to be just fine in the very next scene. But then, this is a film full of such miracles: Two minutes after Diamond finds his mother passed out and hung over, she's sitting up in bed, chatty and looking great. Diamond's girlfriend gets pregnant and Dad, a classically trained pianist, shows up to crash on his couch and issue sage warnings: "I had a beautiful wife and child and I let that go because I thought my music was more important."

Diamond sits in a nightclub thoughtfully sipping brandy while Faith Evans (widow of slain rapper Notorious B.I.G.) croons an R&B slow jam. He realizes his dad and girlfriend are right and it's time to grow up. Except, well, maybe he doesn't. There's clearly meant to be some moral distinction between Gage and Diamond, but as this previously low-key film degenerates into a gratuitous orgy of murders, both guys seem equally likely to whip out guns and start capping people at a moment's notice. OK, maybe there's a viable, if unoriginal idea here: In a society based on greed and avarice, it does no good to lecture people at the bottom about moral behavior. But Adetuyi lacks sufficient control of his material and actors to make clear what he wants to say about this, if anything.

"Turn It Up" suggests a modified version of an old joke: Its director has apparently heard about some of the movies made since 1980, but he hasn't seen any of them. Adetuyi has definitely seen "Mean Streets" (and should probably take that video back to the store) along with several of the blaxploitation era's less coherent titles, like, say, "Superfly T.N.T." or "Slaughter's Big Rip-Off." Cinematographer Hubert Taczanowski effectively emulates the grainy, dirty light and restricted palette of those movies, and Adetuyi's script features the cardboard Caucasian villains, the awkward exposition laced with "down" street lingo and the sudden, unexplained eruptions of violence. Adetuyi seems totally unaware, for example, of the trifecta of outstanding second-wave gangsta films that appeared in 1991: "Boyz N the Hood," "Straight Out of Brooklyn" and "New Jack City." Each of those movies spun a similar yarn in far starker, and vastly superior, fashion. (While we're on the subject, what the hell ever happened to Matty Rich, whose "Straight Out of Brooklyn" was the best and rawest of those three? He hasn't made a film since 1994.)

Although Adetuyi is reportedly making a name for himself in Hollywood as a screenwriter, his dialogue here is glaringly unsubtle at best. (Girlfriend, immediately after telling Diamond she's pregnant: "Are you gonna do the right thing? I want my baby to have a father, not some thug who's running the streets.") Then again, maybe the writing feels so weak because Pras and Ja Rule are so limited as performers. Handsome but almost totally impassive, Pras seems baffled and ill at ease in nearly every scene, as if he can't wait for the cameras to turn off so he can kick back. Ja Rule has a clearer idea of what he's doing, and his angry-scary knucklehead in search of "money, drugs and hoes" seems both dangerous and boyish. But Gage is still a strident, one-note character whose fate we can guess as soon as we meet him.

Although the lovely Jones occasionally stumbles over Adetuyi's dialogue, she also has some of the movie's most genuine moments, turning her rather hackneyed good-girl part into a sensual and clear-eyed woman. Hall, best known for his years in the cast of "Chicago Hope," is, as always, a consummate professional, imbuing the sentimental role of Diamond's dad with gentlemanly eloquence. Actually, if there's an ironic ghost haunting "Turn It Up," it's Hall's own directorial debut, "Gridlock'd," one of the neglected gems of recent American film. A gritty, constantly surprising drug-world comedy starring Tupac Shakur and Tim Roth, "Gridlock'd" appeared (and rapidly disappeared) shortly after Shakur's 1996 death. Had that charismatic rapper -- a far more natural screen performer than Pras can ever hope to be -- lived to ensure that Hall's film was properly promoted, the hip-hop world might already have its movie star.