Bush's secret plan to demolish the Al-meister in the presidential debates is revealed. 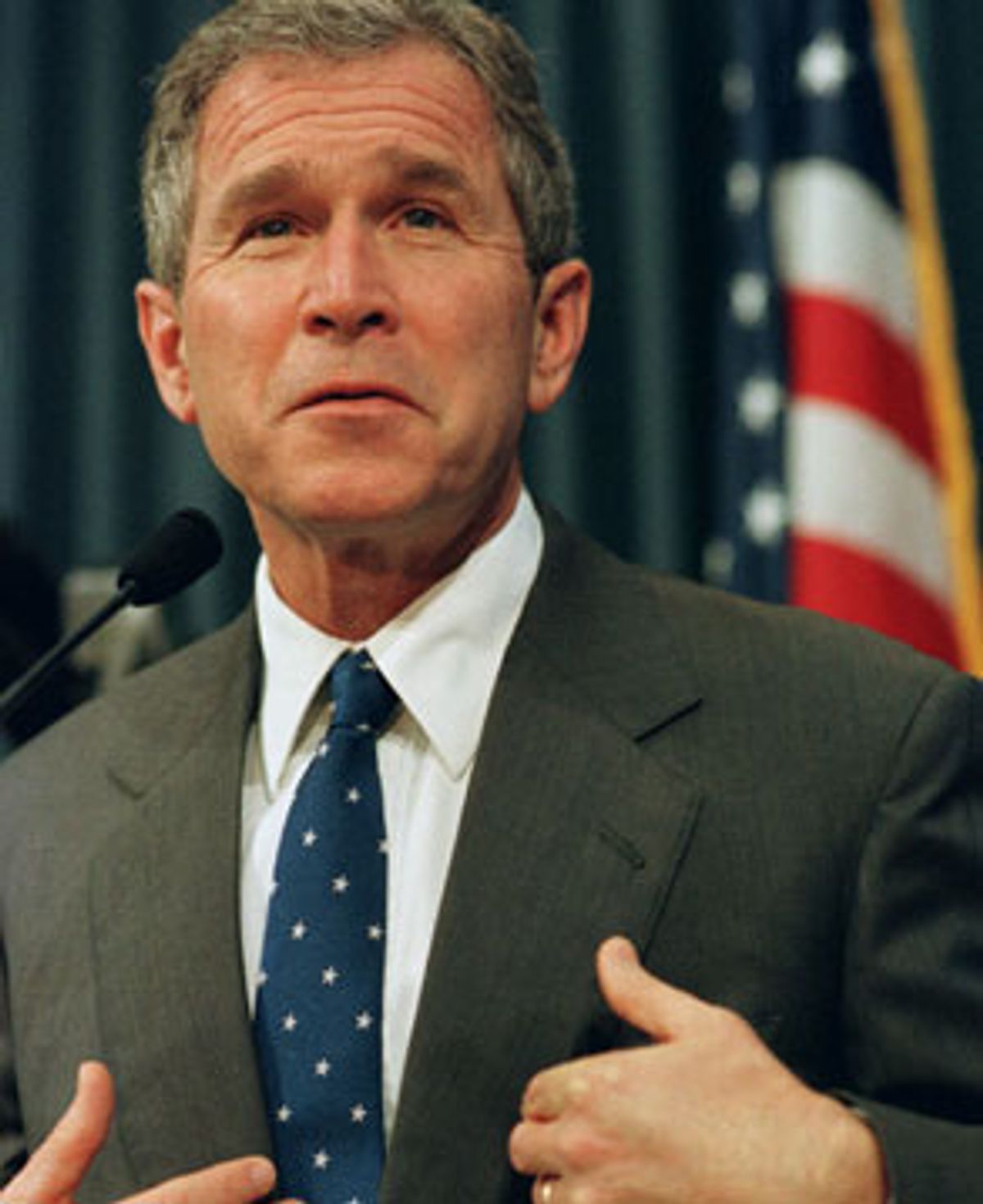 In an effort to turn the tables on Vice President Al Gore, who has accused him of avoiding high-profile, prime-time debates, George W. Bush has come up with his own set of proposals. Bush has offered to make a prerecorded 3 a.m. appearance on the Home Shopping Network, to "hang out with some dudes and some brews and talk 'bout stuff" at Billy Ray's Giant Racks Gun Club in Dallas, and to submit to an in-depth, one-on-one conversation with Barbara Bush.

But contrary to Beltway wisdom, Bush can actually beat Gore in a debate -- even a rigorous formal debate moderated by pointy-headed Harvard elitists who hate the Bush family and all it stands for. How? Simply by being himself.

Bush gave a preview of his debate strategy on Monday, when he was caught on tape calling New York Times reporter Adam Clymer "a major league asshole." Running mate Dick Cheney came back with an approving "Big time."

The media saw the comments as a campaign gaffe, but in fact sources say the exchange between the two men was carefully planned, an example of the down-to-earth guy-talk they think will win them the election. Experts say that Bush's formidable arsenal of imbecilic Delta Epsilon comebacks, well-timed whoopee-cushion noises and exaggerated, fake-stoned "whoa, dude" expressions following wonkish Gore statements could demolish the uptight vice president.

"Winning a debate isn't about being the smartest, or the best-prepared," notes debate historian Nigel Tufnel. "If Bush can come across as a lovable wiseass and make Gore seem like an uptight, grade-grubbing teacher's pet, it won't matter if he doesn't know an ICBM from a Long Island Iced Tea."

Gore: And I say to you, let the winds of freedom blow across this great land of ours until every American has the job they deserve!

Bush: Did somebody say "blow" and "job"? Ace, you gotta get Monica out of your mind! You are the dudeness with the lewdness! I know she was a Babe-braham in the bedroom of Abraham, but you gotta leave that young thang alone! But first, can I have some? [Walks over and slaps Gore five.] Spank the plank, secular humanist adulterer! Big time!

Gore: No more bailouts for millionaires. It's time for government to keep its end of the bargain with the American people!

Bush (shaking his head mournfully): Dude, dude. You must be loaded, Holmes. You're cut off on the bong, ace. Your lameness is of a sameness. If every time you're sippin' on a 40 you start quoting Grouchy Marx, my man, you can't be hanging at Epsilon House. Major league bummer!

Gore: The positions espoused by my honorable opponent are incoherent and self-contradictory.

Bush (derisively): Oh, it's the Al-meister! The Al-osaurus! Al-o-rama! He's so-oo-oo smart! [Turns and winks at audience while surreptitiously gesturing with thumb at Gore.] Major league asshole. [Waves arms and coaches audience to join in the refrain.] Big time!

Bush (making mock bowing-down gesture before Gore): Whoa! We're not worthy! That's heavy! Hea-vy! Heh. You know pal, when you were memorizing all those fruitcake numbers last night, I was layin' pipe -- all night long. [In nasal Jack Nicholson voice.] Know what I mean, Mrs. Mulwray?

Gore: To the American people, I say: Lift up your hearts and you can realize the dream that has made this proud nation a City on a Hill and a Light unto the Nations.

Bush: Lift up your hearts?? Harsh realm, dude! The only thing your boss lifted up was some skanky chick's skirt!

Gore: And so I say to you: Let us all come together, Americans of all colors and creeds, to forge a better tomorrow. For America has always been a place where tomorrow is endowed with a special magic, a special --

Bush (breaking in): Silencio, dude! [To audience.] Man, does this clown like to flap his gums, or what? He's like one of those broads that just won't shut up, even when you've gotten down to the short strokes in the back seat of the Cutlass. Bo-ring!

Gore: And so, Governor, I submit to you that your Medicare plan is a fraud that asks working Americans to put their faith in Big Insurance.

Bush (donning toga and pulling out cheap acoustic guitar): Al, I don't know why, but your whiny liberal dogoodnik voice reminds me of that guy in "Animal House" -- the one who played this lovely old song. Remember? [Begins strumming and singing in nauseating, reedy voice]: "I gave my love a cherry/that had no stone." [Suddenly raises guitar over his head and violently smashes it into a million pieces in front of Gore's lectern.] Sorry.