In his latest black-comic thriller, the peerless crime novelist takes his wisecracking swindlers from post-massacre Rwanda to downtown Detroit. 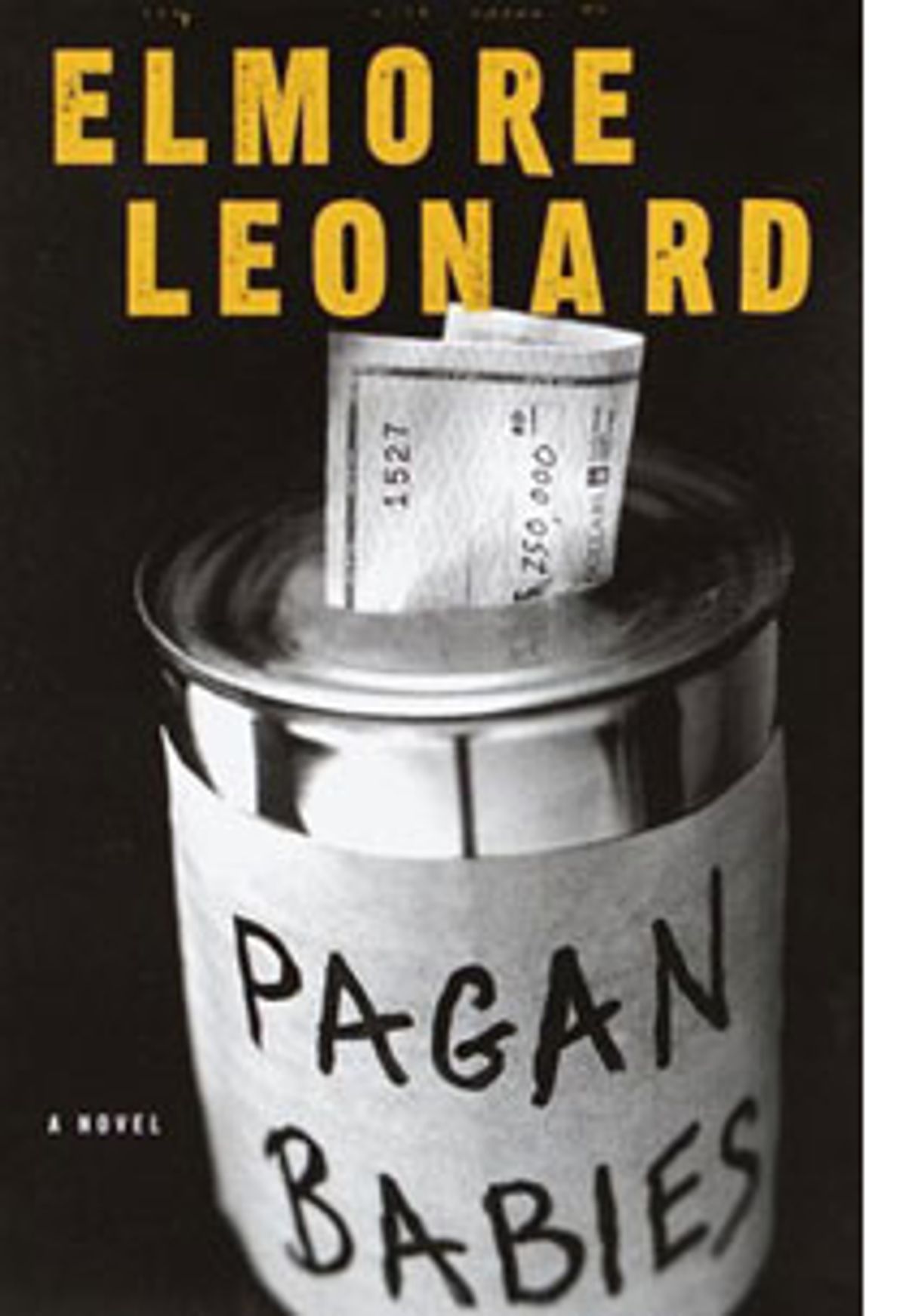 At the heart of Elmore Leonard's thrillers is a black-comic amusement at the bad behavior human beings are capable of. Leonard isn't surprised at the malice he chronicles, but he's no cynic; he feels too strong a sense of disgust. The risky opening chapters of his new novel, "Pagan Babies," tackle the Rwandan massacre -- a subject that makes Leonard's usual terrain of swindles, betrayals and contract hits look like a night with an Amway salesman.

The rogue at the center of "Pagan Babies" is Father Terry Dunn, a Catholic priest who has come to Rwanda by way of ducking a Detroit tax-fraud indictment, and ministers, sparingly but pragmatically, to his African flock. When one parishioner tells Terry that he wants to kill the man who murdered his family but is afraid of going to jail, the good father has this recommendation: "Walk up to the guy and hit him in the mouth as hard as you can with a rock. You'll feel better. Now make a good Act of Contrition for anything you might've done and forgot about."

Rwanda is a land where it's hard to forget. Reminders of the recent past are everywhere: in the bones of the Tutsi corpses preventing Terry from using his church, in the missing arm of his housekeeper, Chantelle, and in the country's absence of dogs (gotten rid of because they had a tendency to eat the dead). Nodding to Philip Gourevitch's "We Wish to Inform You That Tomorrow We Will Be Killed With Our Families," Leonard acknowledges that there are much larger things going on in Rwanda than those that make the country a good backdrop for a thriller. His evocations of the massacre (and his swipes at the stupidity of international relief organizations, which made the naive mistake of treating the Hutus and the Tutsis as equal victims) don't reduce or exploit that horror, or make the mistake of implying that it could never happen again.

So it's a bit of a disappointment when the action switches to Detroit and Terry, returning home for a visit, starts working a scam with Debbie Dewey, an ex-con and aspiring stand-up comic. They're out to take the boyfriend who swindled Debbie out of a bundle, aiming to recoup her losses and provide for a donation to Terry's Rwandan "fund." Of course, "Pagan Babies" is an Elmore Leonard novel, which means that it's still better than about 90 percent of the crime fiction out there. His dialogue-driven prose, so tuned in to the elisions and tics of his characters' speech as to sometimes approach the abstract, remains one of the marvels of contemporary American fiction. And you have to be on your toes to catch all the stone-faced wisecracks that Leonard gets off. No musing on the long hostility between the African-American and Italian-American communities matches this tossed-off observation: "Detroit, for some reason, is not big on good Italian restaurants."

Linguine Detroit may not have, but as long as Leonard resides there, the city can boast one wily old romantic. Leonard has become so good at setting up instinctive romantic pairings that I wish he could be a little more optimistic that things might work out romantically for his "too smart for their own good" schemers. (The perfect romantic ending to the film of Leonard's "Out of Sight," where Jennifer Lopez's federal marshal arranges for bank robber George Clooney's escape, fit the material perfectly, but Leonard didn't provide it. It was an invention of screenwriter Scott Frank.) But Leonard's next-to-peerless abilities as an entertainer make up for his occasional lapses as a matchmaker. And no matter how wise he is, he's no preacher. "Pagan Babies" avoids phony moral uplift. Leonard knows that for corrupt bastards, the entire planet might as well be the same small village, ripe for the picking.