This new book is as much about the history of lesbians in this country as it is about their art. 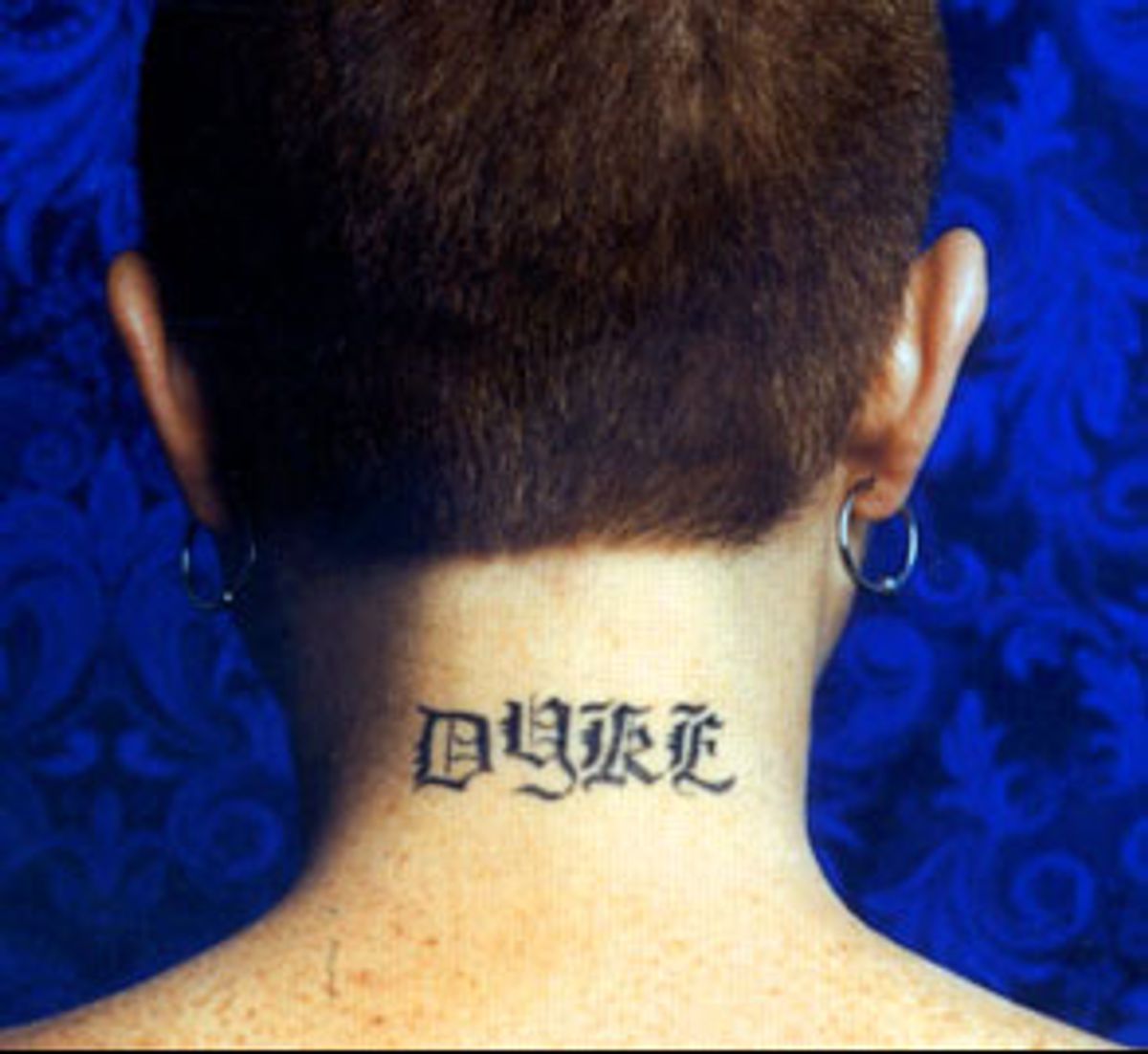 If a lesbian makes a painting, is it lesbian art? If a man regards a piece by a lesbian, is it still lesbian art? And what if a straight man gets off on it?

These are threads from the skein of questions posed by Harmony Hammond's "Lesbian Art in America: A Contemporary History." They yanked me right back to the 1970s, where her narrative begins. Back then, to locate yourself anywhere on the left or (by no means the same thing) to take a stance of conscious opposition to the culture of patriarchy -- whether as feminist, gay, lesbian or even sensitive New Age straight male -- was to entangle yourself in just such knotty inquiry.

Inquiry, or inquisition: The sectarian theorizing and impassioned but tortured name-gaming of 1970s radicals prefigured the stupefying culture of political correctness that emanated later from academia (and no wonder, since debaters of the '70s grew up to join faculties).

In the 1970s, for instance, my ex-wife was right on time when she decided to teach an all-wymmyn Spanish class; but, a lover of language, she was flabbergasted when one of her students -- a full-time activist who called herself an internationalist/feminist, or maybe a lesbian/socialist, I forget -- insisted on feminizing the endings of all masculine nouns. Those were the years, as Hammond writes, when "in a kind of reductive sisterhood, definitions of lesbianism were extended to include any woman-identified woman, regardless of her sexual practice, and every woman was viewed as a potential lesbian whether she knew it herself or not."

But who can dispute the sexual revolutionaries' need to state their own questions and invent their own language(s) even as they reinvented and empowered themselves? (And if you thought you were exercising power when you took your ball and stalked off home, just wait until somebody commandeers a conversation you thought you were participating in by redefining all the terms.)

Anyhow -- and thankfully, since she was there from the beginning as a participant and/or observer of the rhetorical battles, coalitions, splits and realignments of the women's, gay and lesbian movements (she's now on the art faculty at the University of Arizona) -- Hammond's book is a smooth read. It is free enough of both political jargon and art babble to not irritate the uninitiated, while providing just enough, I should think, to keep the jargon junkies hooked.

The book's three sections focus on each of the decades since 1970, placing the art made by lesbians in each period against the larger history of emerging lesbian culture; there are also profiles of the work of about 20 especially important artists. In fact, I recommend this book for anybody (such as short-attention-spanned baby queers) who wants to understand the modern phenomenon of lesbianism but lacks the patience to pursue history as history. Because the art pretty much reflected the movement at every point, and because it is art -- expressive and intimate, even when confounding -- it presents the history in an easily accessed emotional, rather than intellectual, way. This effect is amplified by personal statements from the artists about their times and work.

Oddly, my biggest problem with the book is that there isn't enough art in it. It's a coffee-table-size volume from Rizzoli, a publisher known for big, glossy, lavishly illustrated works on art and architecture. For a mainstream house to take on this topic is commendable -- this is the first book, after all, to focus specifically on the art of American lesbians. I just wish the publisher had been more generous with the images. Leafing through another recent, more representative, Rizzoli title, "Great Villas of the Mediterranean," I found page after gorgeous page of photos -- bleeds, two-page spreads, atmospheric images framed with white space -- and all in color. The photos of artwork in "Lesbian Art in America" are shrunk down, ganged up -- you can count on one hand those that get a page to themselves -- and too many are in black and white.

Aside from the two or three that accompany each of the artist profiles, there are barely 100 images in the book. It's a visual feast, but the portions are stingy and left me hungry. Even if you are reasonably familiar with recent American art, you will probably not recognize many of these artists or images, for reasons, Hammond makes clear, including the persistent male domination of the gallery world and many lesbians' instinctive (or rationalized) self-conception as outsiders. I can just imagine her battles over this. "Well, Harmony, we can't afford to add more pages," her editor might have said (thinking, "Ka-ching, ka-ching, the bottom line"): "We could always cut text if you insist on more photos." There's no blaming Hammond for not agreeing to that; there's no fluff to have cut.

Most chroniclers of the modern phenomenon of visible homosexuality in America locate its eruption, if not its roots, in the Stonewall riot of 1969. That's when patrons of a New York gay bar fought back during a police raid. Over the years the story of Stonewall has been embellished, so that, in current renditions, the queers seizing history were not just sissies in general but also leathermen, drag queens and dykes, of multiple ethnic strains. I'm willing to believe this, though I can't confirm it, since I wasn't there. I also see the point of these revisions: to make this seminal event more user-friendly to the heterogeneous population loosely called gay.

Differences between male and female gay artists, their work and their relative success still persist, reflecting a fundamental uneasiness in the "family" of gay men and lesbians. (Hammond touches on these male-female distinctions in her history; I could have used more on this, but then I'm a gay man -- and her goal was a focused lesbian, not loosely gay, telling.) She recalls the first "gay" exhibitions, in the mid-1970s: "Most of the work being exhibited by gay men in those pre-AIDS times was erotic, in worship of the perfect male body, and without much political consciousness. Most of the work by lesbians was in keeping with the politically correct lesbian feminist position of not representing or objectifying women's bodies and downplaying any sexuality." This shying from sex and the body was meant to deflect "the male gaze," which had always determined and consumed images of women in Western art, and had been titillated by depictions of women going at it with one another.

By the 1980s, although some feminist theorists were backing themselves into no-exit positions -- like the one that reduces pornography to violence against women -- lesbian artists were busy remembering the body. "The contemporary project for lesbians," Hammond says in this context, "has been to free ourselves from this [male] gaze and reconfigure the terms of lesbian erotic representation." Two phenomena of that decade, the AIDS epidemic (to which many lesbians, and lesbian artists, responded with a fierceness of commitment I fear gay men will never reciprocate) and a right-wing attack on the arts in general and sexualized art in particular, provoked articulation of the notion of the queer. Queer is a label that transcends homosexual, gay and lesbian (and even straight) to embrace, politicize and validate multiple sexualities and gender differences -- the more and the quirkier, the better. (Hammond's discussion of the emergence and meaning of the queer idea is masterful and concise.)

By the turn of the century, thus freed, "the lesbian artist is going where she wants, when she wants, how she wants, and is taking perverse pleasure in doing so," Hammond writes. "The change from twenty-five years ago is that the new crop of young [artists] are aware of this ongoing problem [of the male gaze], but do not really give a damn. Instead, they assume different gazes and just make their work, no matter who is looking."

Gaze on this, mofo: my pussy, my piercings, my sculpture of two mounds bristling with pins. Much of the imagery has a purposeful edginess: This is me with one breast, post-surgery; this is (me as) a quivering hole on the beach; this is me and my mother without shirts on. A great many lesbian artists have chosen to work in photography, which lends itself so well to direct presentation. But even pictures that are funny are frightening, too -- like Nicole Eisenman's cartoony "Betty Gets It," of two women (the Flintstones' Betty and Wilma?) having sex, the butch (well, the one inserting a finger) wearing an angry grimace, the other a look of caught-in-the-headlights fear; or G.B. Jones' Tom of Finland-esque image from the "Tattoo Girls" series, in which one muscular dyke is cutting into the chest of another.

Call me a (gay) man, call me squeamish about women's bodies, but the works that I found to have a more lasting effect tend toward the abstract: Lula Mae Blocton's untitled painting from a still-life model of woven acetate ribbons -- veiled, layered, softly transparent and enigmatic. And Carrie Yamaoka's "The Well of Loneliness," in which a page of text from the Radclyffe Hall novel is manipulated and blurred so that just one line -- "Her hair was quite short" -- can be read. And Susan Silton's "Self-Portrait #9," a self-induced mutation created by purposely moving her body while scanning an image of her face.

To all those tangled questions -- Is there a lesbian art? etc. -- Hammond seems to answer, "Yes, no and all of the above." She correctly sees her task in this groundbreaking book as preparing the field; if there are final answers to be had, she and others can get around to them later. But we do get a clue to her feelings from what she says about her own art: "For me the painting skin, that edge where art and life literally meet, always relates to the gendered body as site. To layer strokes of paint is to ... build on the body. To caress. To incise into the painting surface is to cut into the body."