The art of the Caan

In "The Way of the Gun," veteran badass James Caan shows whippersnappers Benicio Del Toro and Ryan Phillippe exactly how it's done. 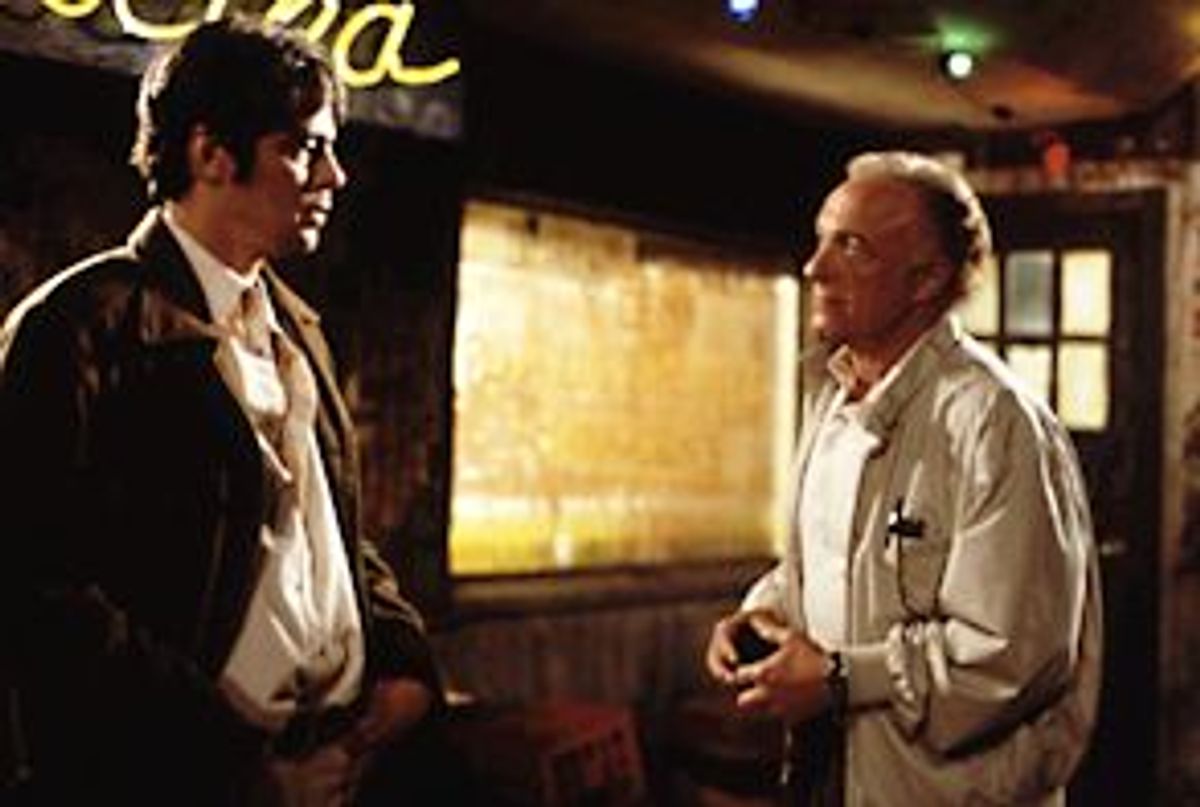 At one point in "The Way of the Gun," the Jim Thompson-esque neo-noir film from writer/director Christopher McQuarrie, which opens Friday, James Caan's character, Joe Sarno -- a mobster in the employ of shady Southwestern tycoon Hale Chidduck (Scott Wilson) -- has to put the smack down on younger colleagues Jeffers and Obecks (Taye Diggs and Nicky Katt). These coldblooded, gun-toting pups are full of contempt for the scarred, savvy Sarno. But Sarno gives them something to think about, telling them, "The only thing you can assume about a broken-down old man is that he's a survivor."

That line sums up Caan's character in the film, starring Benicio Del Toro and Ryan Phillippe as a murderous, gunslinging twosome who kidnap a surrogate mother pregnant with Chidduck's son and hold her for ransom. But it also defines Caan himself -- a gray-haired Hollywood survivor who all but walks away with this first film by Oscar-winning screenwriter McQuarrie ("The Usual Suspects").

"That's my favorite line from the film," says Caan during a recent interview. "I just wanted to convey, without even mentioning it, that this guy's been to war. That's how Joe Sarno was for me. You can kinda go through one war and feel lucky that you didn't get hurt. You can go through two, and still come out all right. But go through 10 wars, and you go through some stuff."

Though the focus of the action is on desperadoes Parker (Phillippe) and Longbaugh (Del Toro), it's Caan who's most convincing in his role as the world-weary crime warrior. Phillippe's grown a beard to hide his baby fat and Del Toro walks through the flick with the street cred garnered from his past roles, but Caan is the real deal -- a former leading man and hell-raiser known as much for his '70s romps in the Playboy Mansion as for his Oscar-nominated performance as the hotheaded Sonny Corleone in "The Godfather."

Looking trim and very much the ex-jock (he played college football back in the day for Michigan State University), Caan, a veteran of more than 50 feature films, describes his character Sarno in language that seems applicable to himself -- a 60-year-old with the sort of musculature men half his age would envy. Sitting on the edge of his seat, dressed in a wrinkled blue-and-white-striped shirt and faded jeans that make him look like some grizzled construction worker, the line between Caan and Sarno seems particularly blurry.

"If you go into the jungle, man, certain animals gotta make a lot of noise before they kill. It's like guys in a bar who're trying to convince you and themselves that they're going to kick your ass. But the guy who comes up to me and says, 'Listen, do me a favor. Don't do that again because otherwise I'm going to have to peel the skin off your head. Please.' You don't want to fuck with him, excuse my language. When a lion walks through the jungle, he don't make noise. When he decides to kill, he goes, 'Whack!' and he kills. That's Joe Sarno," Caan explains in his native Queens accent.

Caan's a gregarious fellow -- quick to laugh and rarely at rest, even in his seat. But he retains the feral intensity of his salad days, when he was considered one of the biggest box-office draws in Hollywood, bringing to life classic antiheroes in films like "The Gambler," "Rabbit Run" and "The Godfather" as well as embodying more conventional male roles in "A Bridge Too Far," "Thief" and the 1971 TV movie "Brian's Song," for which he received an Emmy nomination.

Like other actors of his generation, Caan went through a slump in the '80s, his low point being the execrable "Alien Nation," which he has repeatedly slammed in interviews. But the '90s saw a Caan resurgence, beginning with his lead in the Rob Reiner adaptation of Stephen King's novel "Misery" and continuing with smaller, but memorable parts in films such as "Honeymoon in Vegas," "Bottle Rocket" and last year's "Mickey Blue Eyes."

With a character part in the upcoming, critically acclaimed film "The Yards," and his meaty, scene-stealing performance in "The Way of the Gun," Caan's name once again has a certain cachet -- as a legendary figure willing to work with first-time directors and an actor's actor with as much wisdom as his character Sarno has flesh wounds.

"The truth is, it just seems today that the only time I can be selfish about what I want to do is to work with someone who's young," he explains. "They're the only guys who are writing stuff that's character-driven and not a bunch of digital crap. A lot of directors don't like actors much; they'd just as soon work with some digital head or animal. Put a head on some person, make his lips move -- know what I mean? So it doesn't distract from his directorial prowess. So you can be aware of his wonderful shots, his freak explosions and whatnot -- I say with all the bitterness in the world. I happen to like working with guys who like to do stories about people."

This may be crafting a virtue of necessity. After all, Caan's not exactly starring in blockbusters these days. Perhaps that's the result of turning down roles in films like "One Flew Over the Cuckoo's Nest," "Apocalypse Now" and the original "Superman" that could have enhanced his success.

However, Caan brings an authority to his performances that smaller films like "Bottle Rocket" and "The Way of the Gun" desperately need. Without Caan, "The Way of the Gun" would have lacked the anchor to keep its heavily plotted, bullet-riddled script from flying off into sheer fantasy. When Del Toro was getting pointers on how to handle a gun, his trainer told him to go watch Caan in "Thief." And when director McQuarrie seemed to be turning into a marshmallow on the set, it was Caan who took him aside and told him he was being "too nice" to the actors.

"You can't be nice to actors, 'cause basically we're all bums," laughs Caan. "He had to make a transition from being a writer and taking orders and being a director and giving orders. I pulled him aside one day and told him, 'Just tell them to shut the "f" up and go ahead.' He's basically a really sweet guy, though he writes about insane stuff."

In separate interviews, both Del Toro and Phillippe testified to Caan's importance to the production. "When you're working with Jimmy Caan, all you have to do is react, man," Del Toro said. Phillippe added, "Yeah, he's more energetic than both of us."

In view of his leadership role in the making of "The Way of the Gun," would Caan consider returning to the director's chair, a position he occupied for his well-received 1980 drama "Hide in Plain Sight"?

"Not a chance," he says. "I can't afford it. Well, I can't really say never, but I'd have to be passionate about it and I'd have to have complete autonomy. When I directed 'Hide in Plain Sight,' I came back to the studio to find out that someone put music to my picture. I go, 'Wait a minute. I've been doing this for a year, and you put music from the "Dragnet" library, some crap, to my film?' They say, 'Oh no, we're sorry. Don't make a stink out of this. It's only in 30 prints.' 'So what are you going to do with those 30 prints?' 'Oh, we'll show it where the people eat in caves -- Kansas City, or something like that.' That's what idiots these people are. I can't handle that."

But does he ever get bored with doing gangster parts -- the character role he seems assigned to of late? Does he ever get tired of being Old Mr. Badass?

"Well, this guy [Sarno in 'The Way of the Gun'], I didn't play like a gangster. When you look at this film, there's so much stuff that's going on. That's what fascinated me. And I hate violence, OK? Which is strange, 'cause this is as violent a film as you'll find," he says.

"There's a lot of truth in this film," he continues. "And the basic truth is they're all scum. The violence in this picture is the ugliest, ugliest violence in the world. Most Hollywood films glorify it, right? In this, they're telling you that the way of the gun is the lowest thing on earth to do. It's like quitting smoking. You know a good way to quit smoking? I'll make you smoke five packs of cigarettes in an hour. You'll get so sick of it, you won't smoke. Know what I'm saying? I think Chris McQuarrie was really true to that."

Caan says that in some ways, an old James Cagney film is more harmful than "The Way of the Gun." He grew up on Cagney films and the like, and many of his peers found the criminal life exciting because of them. The hot babes always fell for the tough mobsters. There was a mystique about being a gangster, but not in this flick.

"Know who the hero is in this film?" he asks. "Me, Joe Sarno. He's the only guy who has any moral fiber whatsoever. In the beginning, you think this guy's the worst. This guy's the devil. All of a sudden, it's like this guy's the voice of reason -- because he's been through the wars, you know? And he's got a moral dilemma. He's the guy who made it interesting for me, because he didn't have to bark real loud. You knew this son of a bitch could kill you if he wanted to."

Similarly, Caan is what makes "The Way of the Gun" interesting instead of just another derivative, cynical Gen X shoot'em-up. As for Caan: nice guy. But don't try him. He could peel the skin off your head if he wanted. Know what I mean?