The return of Spinal Tap

How did a heavy-metal spoof end up as light as a soap bubble? 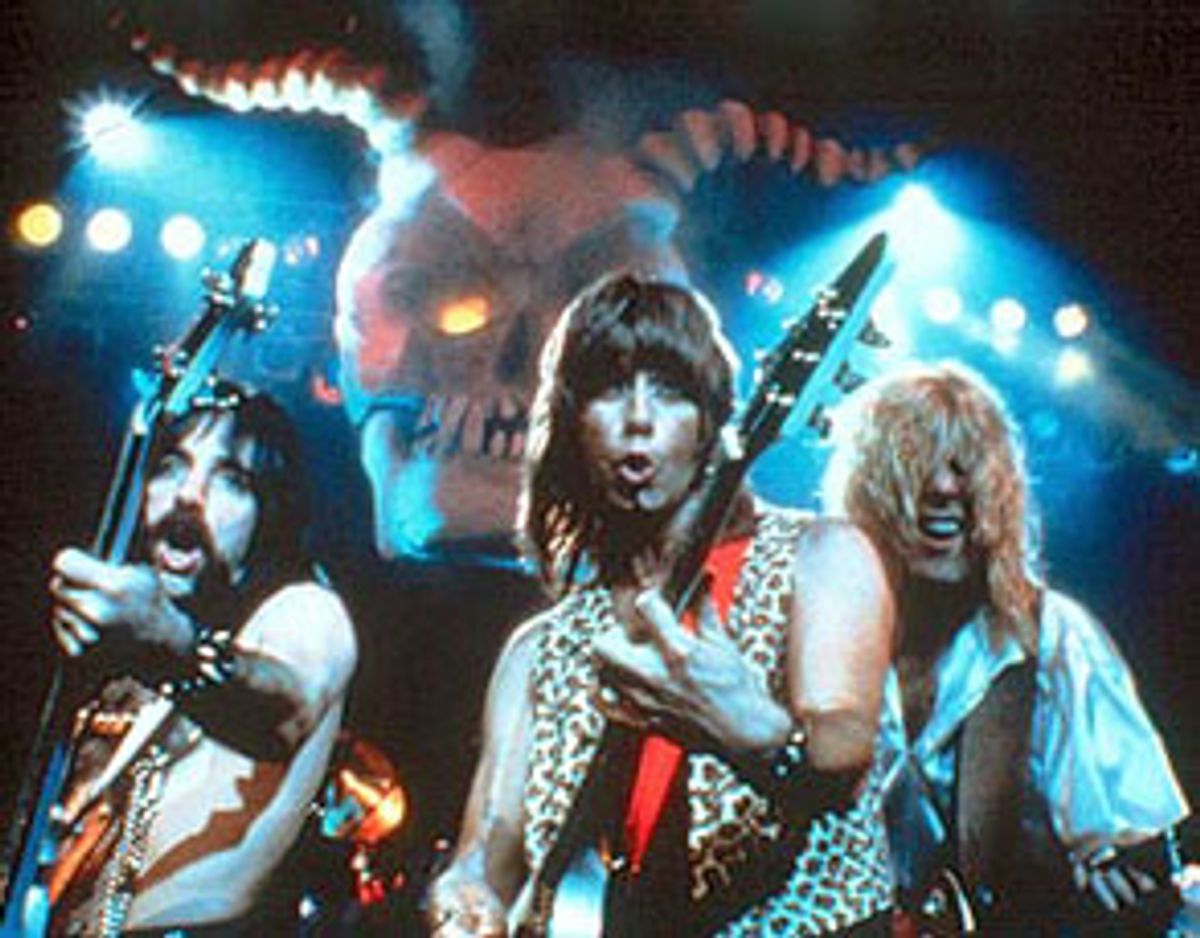 "Every instrument has its own personality. For example, I love the piano for the depth of its feeling. But the piano is not really an instrument -- it's really taking an orchestra, shrinking the people and putting them in a box. The guitar is actually an opera singer with a long neck. If you're not making it sing, you might as well go home."

Everyone who loves "This Is Spinal Tap" has a story about how many times they've seen it, or how stoned they were when they first saw it, or something. Before a recent screening, the last time I saw "Spinal Tap" was in the dentist's chair -- my dentist is one of those progressive types who has kindly installed a video-hookup contraption over the seat of torture. Somewhere between the point at which my tooth was ground down to a nubbly stump and the moment where a temporary crown was popped on with some stinky glue, Spinal Tap lead guitarist Nigel Tufnel babbled on to documentary filmmaker Marti DiBergi about his special amp, the one "wot goes to 11."

And I had to laugh -- but I could only use my eyes.

There's really no point to that story, but I told it because it somehow sums up the abstract wonder, and clear genius, of Rob Reiner's 1984 mockumentary about a heavy-metal band that many fans have grown to love so much they want desperately for it to be real. But for a cult favorite, "This Is Spinal Tap" -- which, beginning Friday, will enjoy a theatrical re-release to coordinate with a brand-new special edition DVD -- is surprisingly subtle. You almost can't blame its legions of faithful followers for memorizing huge chunks of it, and for turning many of its jokes (especially that bit about the amp) into permanent fixtures of rock 'n' roll vernacular. How else do you grab hold of "This Is Spinal Tap," a parody that's so close to its target, so spot-on and elusive at the same time, that it almost -- almost -- isn't even funny? How is it that a heavy-metal spoof can be as light as a soap bubble?

It's a mystery more baffling than Stonehenge.

What is identifiable about the mystery of "Spinal Tap" is the way the improvisational comedians who conceived it -- Christopher Guest, Michael McKean and Harry Shearer, who play band members Nigel Tufnel, David St. Hubbins and Derek Smalls, respectively -- managed to tap into almost every element of the mythology that surrounds not just beloved bands but rock 'n' roll itself. "This Is Spinal Tap" came to life without a written script; the bare bones of the scenes were worked out ahead of time, but the actors improvised almost all of the dialogue. (They also wrote all of the songs. "Since there wasn't a script, we had to write something," McKean has said.)

Guest, McKean and Shearer dig into every dusty corner of established rock lore, riffing on everything from mindless band interviews in which musicians gas on about nothing at all, to songs that profess to have deep meaning but really say diddley squat ("(Listen to the) Flower People"), to the perceived but always unspoken idea that one drummer is as good as another. (Spinal Tap goes through drummers like Kleenex: One spontaneously combusts; another dies from choking on vomit -- someone else's.)

The band's stage performances in the film are delectably overblown and hugely satisfying, featuring absurdities like checkered Spandex pants and stage props that include giant transparent pods. Each band member has a signature look: bass player Derek, an astonishing crop of mutton-chop facial hair; lead singer David (the most comely of the three), a leonine golden mane; and lead guitarist Nigel, a Bay City Rollers shag haircut and a perpetually gobsmacked demeanor. (The band is filled out by real-life musicians keyboardist David Kaff, as Viv Savage, and drummer R.J. Parnell, as the ill-fated spontaneously combusting Mick Shrimpton.) Spinal Tap's stage antics cover all the usual heavy-metal clichis -- splayed legs, horrifying Pat Metheny-style facial contortions during guitar solos -- so perfectly that the group's members come off more like real musicians than parodists. And that's scary.

"This Is Spinal Tap" is rounded out by the usual assortment of rock 'n' roll lackeys and hangers-on: manager Ian Faith (Tony Hendra), who keeps order with a cricket bat; David's Yoko Ono-like girlfriend, played by June Chadwick, who breaks up the band (her bright ideas include suggesting that the band record in "doubly," when she really means "Dolby); and the small-potatoes Midwestern record-label rep Artie Fufkin (Paul Shaffer, in an artfully sniggered-through performance) who can't contain his elation at being able to brush shoulders with even the most faded rock glitterati.

"This Is Spinal Tap" is a treasure not just among rock spoofs but among rock 'n' roll movies in general. Whenever I see it, I can't help being touched by the moment when Nigel and David talk to an interviewer about how they first met and the song they first wrote together. When they harmonize on a few bars of that little skiffle tune, it brings home -- for real and not just for comic value -- the inexplicable and deep-rooted love for the music itself that generally brings real-life musicians together in the first place.

But with that one exception, "This Is Spinal Tap" is played completely for laughs -- laughs that its devotees strip mine with repeated viewings. How much devotion to Spinal Tap as a phenomenon is too much? On his Spinal Tap fan site, surprisingly levelheaded Tap nut Chip Rowe notes that action figures of Nigel, David and Derek will soon be available at $25 to $30 each. He also, sensibly, questions the sanity of the Spinal Tap fans who, via auctions on eBay, spent $510 for two tickets to the movie's Tuesday premiere in Hollywood and $910 to see the band's private gig at House of Blues afterwards. A quick check on eBay reveals that a copy of the now out-of-print Criterion Collection "This Is Spinal Tap" DVD (the new MGM DVD, with new features, replaces it) recently sold for $96. It may not be "Star Trek," but "This Is Spinal Tap" obviously strikes a pleasurable nerve with the collective rock 'n' roll subconscious.

On one hand, the idea of a new DVD release of "This Is Spinal Tap" seems silly. The old Criterion release, besides a number of deleted scenes, included two running commentaries -- one with Reiner and the other with Shearer, Guest and McKean, and both riotous. On the other, the new commentary included on the MGM DVD (which was unavailable at press time) sounds like a stroke of brilliance: The actors comment on the film scene by scene in character, denouncing DiBergi's work as a hatchet job. It's a way of giving the actors another chance to improvise on their great invention, 16 years after the fact. And because we can hear but not see them, it's as if time hasn't changed them -- a sneaky way of achieving the ultimate rock-star fantasy of never growing old.

The new DVD release also includes the original's selection of deleted scenes, among them a moment that defines in particular Guest's pitch-perfect, off-the-cuff intelligence. Reiner, as DiBergi, asks Nigel what he might hope to be if his rock-star career were to end. Nigel says that he'd like to be a surgeon, to which DiBergi queries, "Do you think you'd be good at it?" Nigel waits one perfect beat and replies, with his typical cocksure cluelessness, "I like surgery."

Of course, you could take "This Is Spinal Tap" apart moment by moment. You could watch it a dozen times and memorize every gag, or pay $500 for a chance to glimpse its stars from afar. But the more you re-embroider "This Is Spinal Tap," the more you run the risk of fossilizing its weird magic. I plan to watch "This Is Spinal Tap" only once every 10 years or so, although perhaps never again in the dentist's chair. And at the risk of going on far too much about a movie that I think of as one sustained note of rock 'n' roll pleasure, I'll stop here. At 10.