"The Blind Assassin" by Margaret Atwood 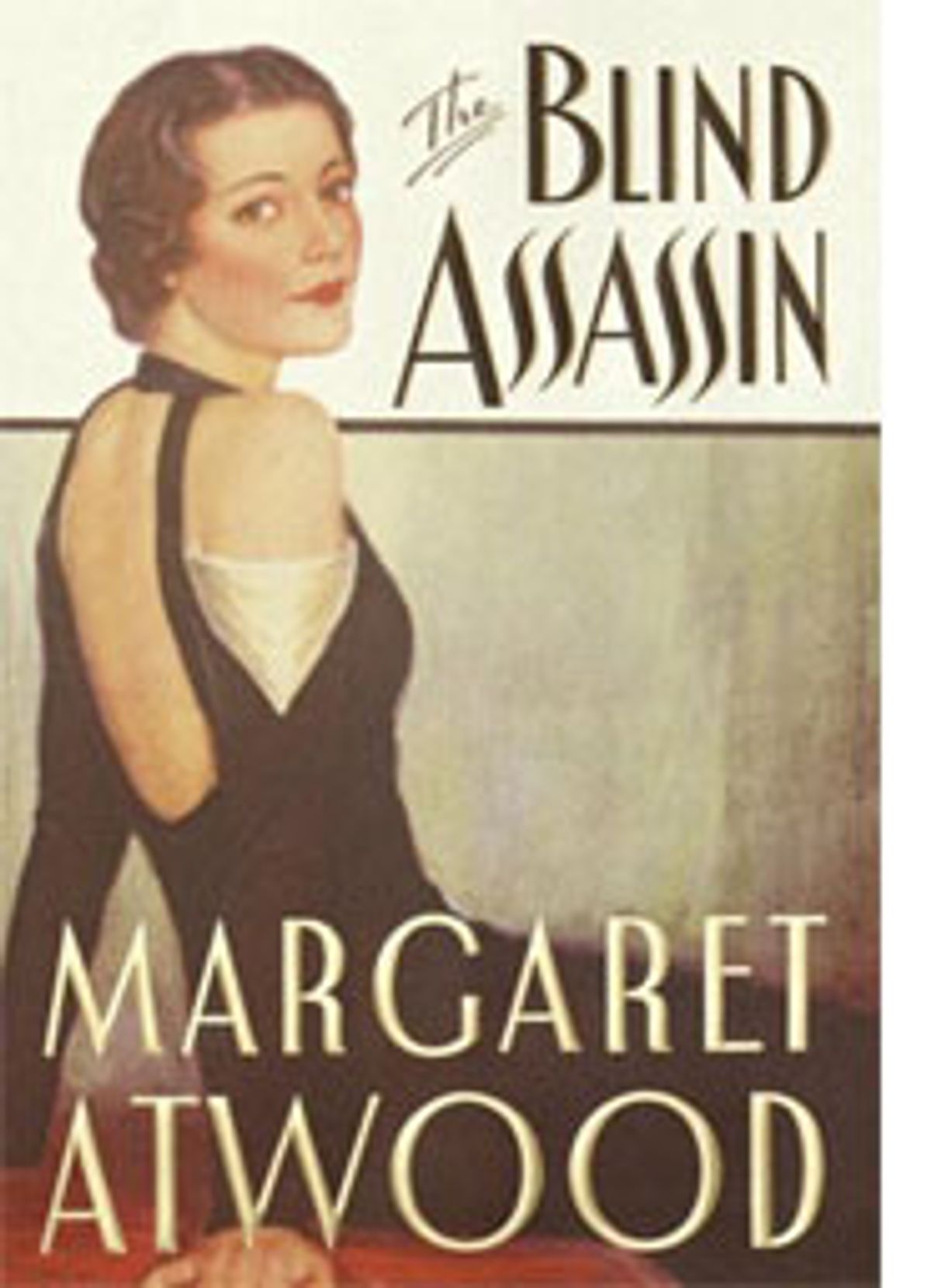 Margaret Atwood poses a provocative question in her new novel, "The Blind Assassin." How much are the bad turns of one's life determined by things beyond our control, like sex and class, and how much by personal responsibility? Unlike most folks who raise this question so that they can wag their finger -- she's made her bed, and so on -- Atwood's foray into this moral terrain is complex and surprising. Far from preaching to the converted, Atwood's cunning tale assumes a like-minded reader only so that she can argue, quite persuasively, from the other side.

Iris, the elderly protagonist who narrates this story of her family's life, starts with a dispassionate observation: "Ten days after the war ended, my sister Laura drove a car off a bridge." When a police officer suggested that the brakes failed, Iris says, she nodded in agreement, but believed otherwise. "It wasn't the brakes, I thought. She had her reasons. Not that they were ever the same as anybody else's reasons. She was completely ruthless in that way." Iris speculates about her sister's last moments: "The white gloves: a Pontius Pilate gesture. She was washing her hands of me. Of all of us."

So begins the story of the Chase family, wealthy industrialists whose rise and fall reflects shifts in Canada's ruling class over the last century. Iris and Laura are the pampered but isolated children of a button manufacturer. Unraveling why her sister drove off a bridge at 25, and why she is still consumed by guilt and bitterness half a century later, Iris pens this 521-page letter to her estranged granddaughter. Interspersed with Iris' own words are newspaper clips and vignettes through which Atwood also lets the story unfold. A small-town newspaper reports on the annual button factory picnic, the last before the onset of the Depression and labor trouble; the Toronto Star society page notes Iris' marriage to her father's rival. A bleak honeymoon follows. More Chases are born; more Chases die.

This family saga is sketched with Atwood's trademark dark humor and deft hand. For example, the Chase family's precipitous rise during World War I is explained thus:

War is good for the button trade. So many buttons are lost in a war, and have to be replaced -- whole boxfuls, whole truckloads of buttons at a time. They're blown to pieces, they sink into the ground, they go up in flames.

The war takes two of the Chase boys and irreparably damages the third, but it makes the family rich. And this money, insidious, corrosive but empowering to the family, ultimately makes Iris herself powerless.

Complementing the historical plotline of Iris and Laura's coming-of-age between the world wars, Atwood braids in two other strands that keep her tale moving at a brisk clip. One is Laura's posthumously published novel of dystopia, the futuristic story of a city's demise at the hands of a blind assassin and his mute lover. This novel-within-a-novel picks up on the interplay between optimism and despair being dramatized politically on the streets of Canada during the Depression. The other is the story of Iris' contemporary life, that of an elderly Canadian woman whose mundane treks to the converted "Button Factory Mall" and the donut shop mask her monumental struggle for independence and status in a suburban culture in which she's deprived of both. Of a male family friend who, after assembling a fan for Iris, says, "That should fix her," she observes:

Boats are female for Walter, as are busted car engines and broken lamps and radios -- items of any kind that can be fiddled with by men adroit with gadgetry, and restored to a condition as good as new. Why do I find this reassuring? Perhaps I believe, in some childish, faith-filled corner of myself, that Walter might yet take out his pliers and his ratchet set and do the same for me.

Iris, alas, is forced to live her life in a kind of purgatory of regrets, never quite "fixed." Awareness, or sight, comes to her too late.

In presenting Iris' story, Atwood culls from all the themes and styles she's explored in the past. There is a little of "The Handmaid's Tale" in the sci-fi dystopian novel-within-a-novel and much of "Cat's Eye" in the protagonist's reflective journey back in time. "The Blind Assassin" takes Atwood fans to all their favorite places -- and ups the ante. This is a dark masterpiece in which tension comes from the sharp juxtaposition of worlds and in which futuristic fantasy interrupts and reflects a disquieting reality.

Meanwhile, Atwood has chosen an unlikely guide for the journey. "The Blind Assassin" is one of those tricky novels that features a near-distasteful hero or heroine (think Ignatius in "A Confederacy of Dunces," or Harry in "Rabbit Redux"). Because Iris has moved through her life in a fog of others' expectations, incapable of identifying her own needs and responsibilities, the impulse to grab her by the shoulders and shake her is strong, particularly when she sleepwalks into an arranged marriage and passively permits her sister's institutionalization in a mental hospital. But stoking readers' frustration is, of course, intentional on Atwood's part. (Good progressives, inclined to blame the repressive social environment that created this passive heroine, will have to contend with their own internal counterpoint, the one that goes, "yeah, but still, how could she do that?")

That internal dialogue leads us right back to the question of responsibility. Is Iris culpable, or is she a pawn, innocent of wrongdoing in her sister's death? Since the notion that Laura accidentally drove her car off the bridge was never a plausible scenario, the haunting question at the book's heart becomes, did she jump or was she pushed -- by Iris?