Gay men have long been infuriated by a government ban on their donating blood. This week the FDA is reconsidering its position. 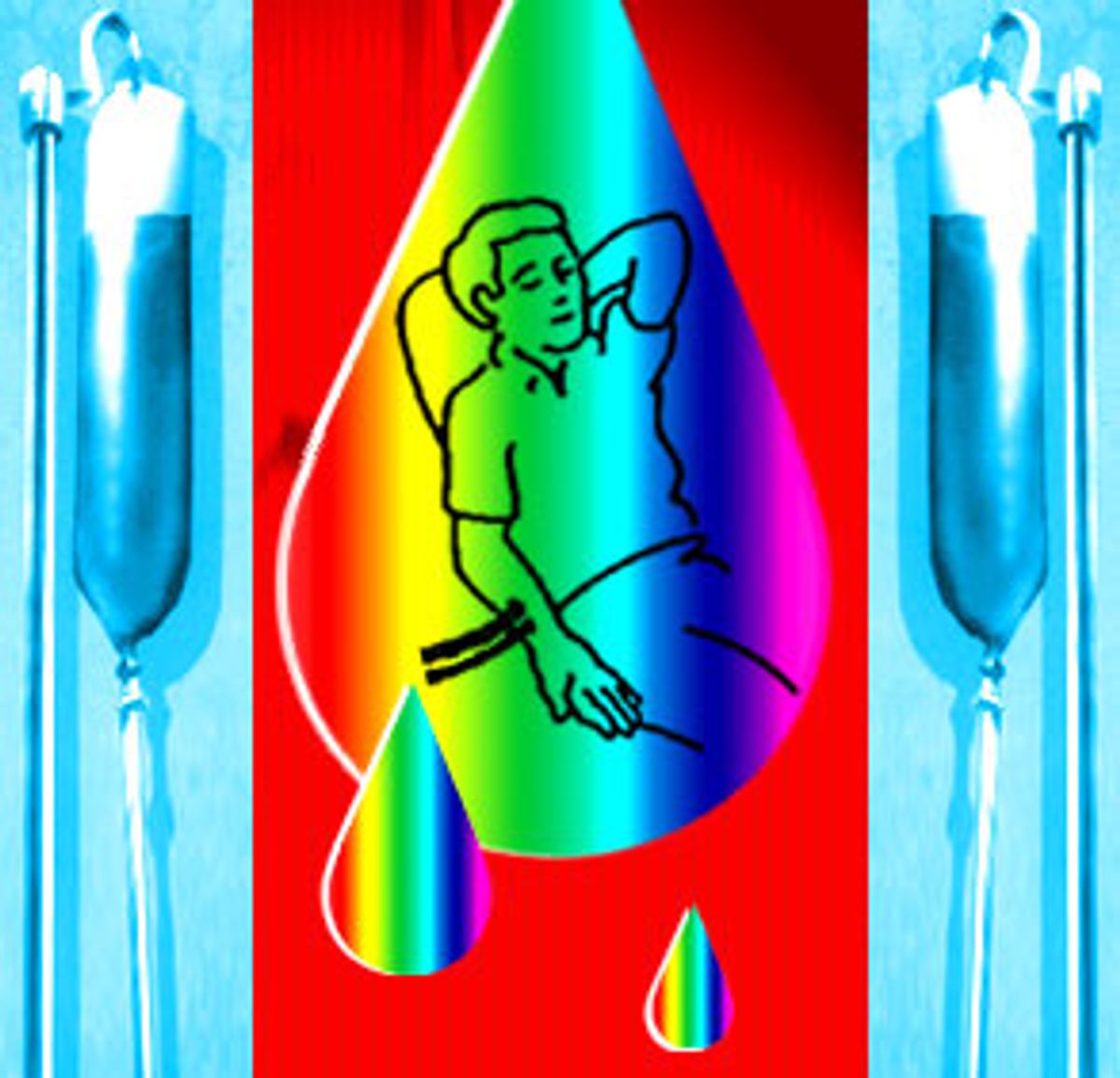 One of the great early disasters of the AIDS epidemic was the dissemination of HIV infection through the nation's blood supply before antibody testing became available in 1985. Since that time, healthy gay men who have wanted to donate blood have been barred from doing so. Under the Food and Drug Administration's current guidelines, blood banks must permanently screen out any male who has had sex with another male since 1977.

On Thursday, the FDA's Blood Products Advisory Committee will reconsider the issue at a meeting in Gaithersburg, Md., and make a recommendation to the organization. The American Association of Blood Banks and many healthcare professionals have proposed that blood banks be allowed to accept donations from men who have not had sex with another man within the past year rather than requiring them to have been celibate for 23 years.

For blood banks, the stakes are high. Many suffer from routine shortages and sometimes have less than a day's supply on hand. Supporters of relaxing the ban on gay men argue that vastly improved tests allowing blood banks to determine the presence of HIV shortly after infection make the more stringent rule unnecessary.

Others, like Dr. F. Blaine Hollinger, chairman of the advisory committee, have gone further and called the lifetime ban "discriminatory." But even if Hollinger's committee recommends a change to the FDA, however, the agency is not bound to follow the suggestion.

The issue is an emotional one, given past accusations against the blood banks that they ignored early warnings of the possibility of HIV transmission through transfusions and placed profits over the public health. In the early 1980s, before the availability of the HIV antibody test, most blood bank officials argued that there was not enough evidence of the danger of transfusions to justify the cost of finding ways to screen out potentially infected blood.

As a result, says Dr. Edgar Engleman, a professor at Stanford University and director of the Stanford Blood Center for the past two decades, thousands of blood transfusion recipients across the country were infected with HIV in the years before 1985. Unlike other blood banks, however, the Stanford Blood Center took steps to protect its blood supply as early as 1983 by testing all donations for T-cell irregularities, which was considered a surrogate marker for infection with the AIDS-causing virus.

Dr. Engleman talked with Salon on Wednesday about the debate over relaxing the ban on donations from gay men and the current problems of the blood bank industry.

Why is the FDA reconsidering this issue now?

From a strictly objective basis, right now there are multiple groups that have been defined as at higher risk for HIV, and the treatment of those groups in terms of donor eligibility is not the same. For example, an individual who has had sex with an IV drug user, a prostitute, a hemophiliac or someone who has lived in sub-Saharan Africa is deferred for one year from the time they come in. But they can come back, and provided they haven't had further exposure to high-risk individuals, they can donate. Whereas any male who's had sex with any male since 1977 is permanently deferred.

From a scientific perspective, it's not consistent and it's not rational. Beyond that inequity, we also have a blood-testing capability that is far more sensitive and accurate than the testing that was available when these policies were put into place. In the old days it was fair to say that the tests were inadequate and unreliable, and therefore there had to be a great dependence on the medical and exposure history that was voluntarily given by the donor.

I think you can spend hours and hours questioning prospective blood donors, and at some point you get diminishing returns. I don't know that getting into greater detail will offer greater yields. The idea that you should depend totally on the responses you get to these questions would not work well, not only because people do not tell the truth, but also because they don't really know.

But if there's a required period of abstinence of a year for a man who has sex with other men, is that going to increase the donor pool much? There probably aren't that many gay men who have not had sex in a year.

You're absolutely correct. There's a problem, however, with trying to go beyond that guideline. Let's say a gay man comes in and says, "I only have one partner and we have a stable relationship." But you don't have the ability to test the partner. It gets very difficult to get accurate information. The fact is that the groups that are defined as at-increased risk are at-increased risk according to statistical evidence, but at the same time it's not fair to label an individual just because they're a member of that group as being ineligible to donate.

What is the current HIV-testing regime?

Right now we do three different tests, and the combination is extraordinarily powerful. We used to use the term "the window period," which refers to the time or delay that follows infection with HIV before antibodies to the virus became detectable. That window period in the old days was as much as six months because the test for antibodies was not very sensitive. That test is greatly improved, and we can now detect antibodies within a month or two.

But beyond that, we are using a protein test, which closes that window period further, and most recently we're using a test for nucleic acid, which basically is a test for the virus itself. That test is capable of identifying one or a very few copies of the virus in the blood and is likely to be able to detect it within hours. The only risk potential here is now human error in performing the test.

If the FDA makes this change, do you think they're likely to face opposition, given the emotional nature of the issue and the concerns people have had over the years about the safety of gay men donating blood?

I think there's a potential backlash, but I think that individuals who are willing to educate themselves on the issue at hand will understand what's leading to the potential policy changes. It's our job to some extent to educate the public. But first of all, the rules haven't changed yet, and if they do change, the changes are going to be very modest.

The blood banking industry clearly went through a horrific period in the early- to mid-'80s, when no testing for HIV was being performed, and it was a very bad period in the history of blood banking. But changes that have taken place in testing have been so dramatic that I think if one looks objectively and scientifically at the issue, it is not unreasonable to be more dependent on these tests than in the past.

Has the public image improved since then?

I think it has. We have transitioned from an industry that was regulated, but minimally, to one that is regulated as tightly, if not more so, than the pharmaceutical industry. Certainly the safety of the blood supply has changed dramatically, and I think that the confidence has been largely restored. But I think there's still a scar. I think there's still an impression in the mind of the public and the government that blood is still unsafe, and I think we're still working to change that.

What is the current rate of HIV infection from blood transfusions?

Nationwide, the risk of HIV transmitted through transfusions is less than one in half a million now. You get down to numbers where it's really tough to give an accurate estimate. I don't think we even have numbers that reflect the combination of the new tests, which has been in effect at most a year. In terms of the number of HIV-positive units of blood caught through testing, it's certainly fewer than 1,000 around the country, probably even fewer than 100. We haven't seen one in our blood bank in several years.

Part of the reason this is coming up now is because there's a blood shortage at the moment. What's that related to?

This is a significant issue. There are two problems with the blood supply today. We have gone through an evolution over the past 10 or 15 years in coming up with more and more reasons to defer prospective blood donors, and that has diminished the overall size of the pool. That does result in periodic blood shortages, which is a significant and growing problem.

Another issue is that the vast majority of blood banks are losing money. The reason is that the cost of testing blood and recruiting blood donors has skyrocketed. You have a situation where we're doing 10 tests today; 15 years ago, we were doing two. Back then we were doing testing for syphilis and hepatitis B. Now we also have multiple tests for HIV, multiple tests for hepatitis C, we test for cytomegalovirus [any of the herpes viruses], we test for HTLV-I [a retrovirus that causes leukemia], and so on. It costs over $100 to produce one pint of blood. It's probably doubled or tripled in the last 10 or 15 years.

So we have achieved dramatic improvements in the safety of the blood supply, but the cost has increased dramatically. Couple that with the fact that it's more expensive to recruit blood donors because of the smaller pool. So the quid pro quo of making the blood supply safer has been to make it much more expensive, and insurance companies and hospitals have been very resistant to paying the increased costs. As a result, the blood-banking industry is approaching a fiscal crisis.

When will we feel this crisis?

It's there for many blood banks. In California, there's no question that most of the blood banks are losing money. At Stanford, we're in the red -- although I guess that's not a good phrase to use for a blood bank. Let's say we're spending more than we're making.