Ready or not, America is bringing back an old playground insult -- for the sheer fun of it. 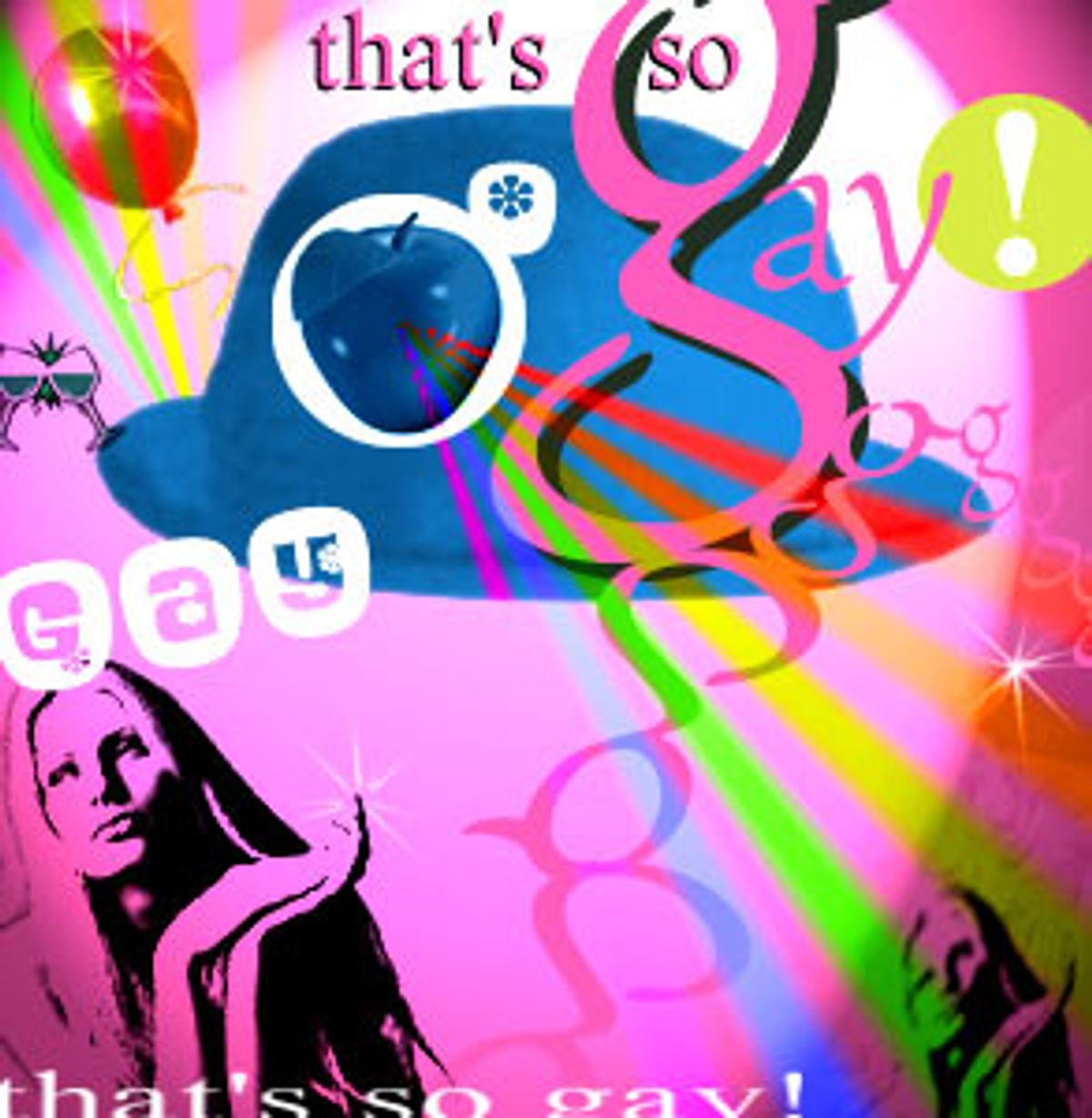 If you live in a decent-sized city and you are gay (or straight with a lot of gay friends), you or someone you know has declared something gay in the last week. Not gay as in homosexual, but gay in that grade-school "That is so gay!" way, i.e. lame, wrongheaded, queer in the original sense.

This is happening all around you. That woman's hairdo? Gay. That book jacket? Gay. The fact that Dick and Lynne Cheney won't talk about their lesbian daughter? Gay gay gay.

"I use it so much I don't even think about it. It's like coughing," says Jose Muqoz, associate professor at New York University and author of "Disidentifications: Queers of Color and the Performance of Politics."

"Everyone loves it," says Cris Beam, a 28-year-old writer in Los Angeles. "I remember saying it at the Gay Pride Parade this year and it was hilarious -- everyone was so thrilled to have it come back, because we'd all forgotten about it. We wanted to say it again and again and again."

And it's not just gay people who are saying it. Those gay-acting straight men are saying it, as are straight women who either have a critical mass of gay friends or have slept with enough women that they feel they can say whatever the hell they want.

"There are so many boundaries that people my age, especially girls my age, don't really recognize," says 25-year-old Sunny Neater, an artist in Chicago. "The whole labeling of gay, queer, whatever seems looser."

"That is so gay" has made a few pop culture appearances, too. In the movie "Loser," one of the geeky hero's cool roommates tells him not to be "so gay." On an episode of "The Simpsons," Nelson kisses Lisa and his friends say, "Ewww, you're kissing a girl, that's gay." Will, of "Will and Grace," told his best friend that his outfit was "so gay."

This small linguistic revolution is, of course, part of the tradition of groups using derogatory names among themselves. But it's also different: The closest approximation to "wop" or "nigger" isn't "gay" but "faggot" or "dyke" -- both of which have gone through their own, separate reintroductions into gay, and gay-friendly, vocabularies.

The difference between "faggot" and "That is so gay" is that the former has a long and nasty association with violence; it's a word adults use and have used for other adults. By contrast, "That is so gay" evokes childhood -- a time that may have been painful but is long past. That distance makes it possible not only to reclaim the phrase but also to reclaim it as an insult.

The result is that it's completely different from the heartfelt "I'm gay and I'm proud" of the gay rights movement. "That is so gay" is simply gleeful in a way that none of the empowering words is. It's insult as pick-me-up.

"I feel happier and more sprightly every time I say it," says David Rakoff, 35, a writer in New York.

Why is this so fun?

Picture life at 9, 15, 18 years old: You live at home, you go to school every day and you know you're different. You're gay. All you want is not to be gay. You're afraid all the time that someone might find out. Maybe you're getting harassed or beat up already.

"I do remember hearing 'That's so gay' as a kid; I remember saying it as a kid," says Beam. "And I always had this vague flutter inside that it might mean me, but I wasn't quite sure why."

Now picture life at 30. You've come out, you've found your way to a city and you pretty much only ever spend time with people -- both gay and straight -- who get you.

"Here's the thing: Finding humor in it is definitely the privilege of the urban, out gay person who has little threat to their person, sexuality or career from saying it," says Rakoff. "But if you have that privilege, it's hilarious, because it's so utterly schoolyard. You're back to being 11, but none of the things that so tortured you at age 11 can touch you now."

After 30 years of gay activism, there are now pockets of America -- in Manhattan, Los Angeles, San Francisco and many other, smaller enclaves -- where gay is the rule, not the exception. And every time people say "That is so gay," it's a reminder that they've created this niche where they can say almost whatever they want, and have it mean almost whatever they want. What could be more fun than that?

"I like to do it because it surprises people -- they're startled because they remember having it said about them or around them," says Beam. "Then there's that look of relief that they're not there anymore and then the realization that now they can be the one to say it."

The reason "That is so gay" can still startle is because its comeback has been so private, by word-of-mouth only; it hasn't saturated the culture.

"I don't think it's going to come back as a thing like 'You go, girl!'" says Tina Gauthier, a 30-year-old artist in New York. "I don't think it could get as big as that."

What does it mean, exactly?

"It means 'too sincere,'" says Rakoff. "Lacking in irony and knowingness, which is funny, since those are stereotypically said to be gay specialties."

"It means dorky," says Beam. "Uncool. But not dorky as in 'femmy' or gender inappropriate, the way 'faggot' did. Faggot meant a particular kind of person, whereas gay could apply to a whole bunch of different things."

So everyone knows what it means, but everyone thinks it means something slightly different. That's another part of the pleasure of the phrase: that it re-creates, for a moment, a time when gay didn't have such a fixed meaning, when the word was so vague that it could refer to a game or a shirt or an idea.

Wait, is this bad?

The danger, with a phrase whose meaning is unstable, is that it can be taken up by your enemies.

"Would I use it in Kentucky? No," says Rakoff. "The rest of the country hates fags and I'm never going there. It does have lightness, but only here."

"That is so gay," users agree, should stay slightly underground. It should never appear on a Lambda Legal Defense Fund press release, and no doubt it won't. But at the same time, users don't want to be told they shouldn't be using the phrase themselves.

"In academia, we all understand that language does hurt and language can be very dangerous," says Muqoz. "But censorship is worse. It's the pleasure and play of language that's so important, and once we start censoring ourselves, that's the first to go."

And having a phrase or gesture that only makes the right kind of sense in front of a certain audience is part of the essence of camp.

"Camp has always been vaguely irresponsible," says Henry Jenkins, director of comparative media studies at MIT. "Because you say one thing and mean something slightly different. That sense of how you secure meaning when you play those kinds of games can be frightening."

And frightening is more fun.

Meanwhile, the expression is still kicking around among kids, with the same old vague definition and disapproving tone.

"I don't hear it ever used on girls, though, just boys," she says.

"I have a feeling, at St. Ann's anyway, that by high school, kids know better than to use it in the presence of teachers," says Avrich.

Muqoz has been hearing it for years from his nephew, who's now 14.

"I've been mapping his homophobia as he enters what Newsweek would call the 'tweens," Muqoz says. "And I see a real connection between his saying 'that's so gay' when he was little and now, when he won't shop at the Gap because he says it stands for 'Gay and Proud.' There's really rampant homophobia when you talk to young kids."

So are adults contaminating kids' minds? Of course. Just as they always have.

"Kids hear so much crap anyway -- if they can hear that words can become part of lighthearted banter and don't have to have the weight that they do, they'll be better off," says Beam. "We don't have to be so precious."

Nancy Updike is a writer in Los Angeles.