Competent and flashy, and Jamie Foxx is hysterical, but this actioner gives you time to think -- and that's not a good thing. 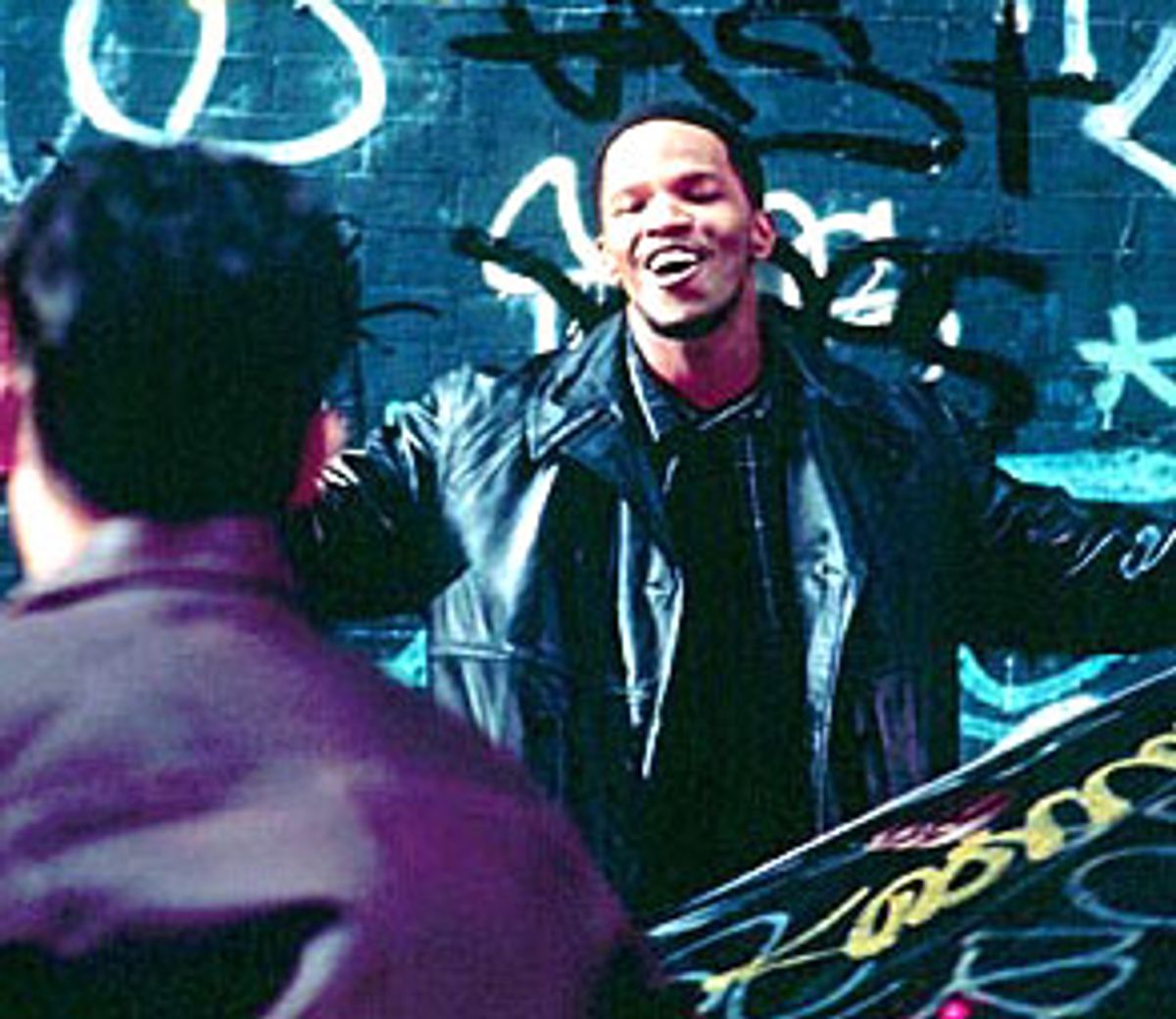 By current standards, "Bait" is a pretty successful action film. It showcases some truly dazzling camerawork and trashes several vehicles, at least two buildings and a Jumbotron TV monitor. Sure, disconnected threads of comedy, romance and drama float between the action scenes like bits of different movies from a late-night channel-surfing session, but they're more mediocre than actively obnoxious.

But "Bait" makes a fatal mistake, one this kind of movie should never make unless it actually is "The Matrix" or "Terminator 2: Judgment Day": It's long. Long movies almost always mean the audience member has time to think, and in this context that's not a good thing. Thoughts and questions come into your mind: Why am I alive? And what am I doing here, watching this particular bad movie, when I could be reading "Remembrance of Things Past" or USA Today? Or watching "Moesha," which, if nothing else, lasts only 27 minutes?

Fast-talking, mock-debonair comic Jamie Foxx, longtime star of an eponymous WB show, is definitely the main attraction here. After his memorable performance as the cocksure young quarterback in Oliver Stone's "Any Given Sunday," Foxx joins forces with former commercial director Antoine Fuqua, who made 1998 actioner "The Replacement Killers." Their basic idea is to throw some contemporary flourishes into an old-school action movie in the Schwarzenegger-Stallone tradition: a little bit of slow-jam, sensitive-guy lovemakin', some free-form gags and a whole lot of ass kicking.

With his pencil-thin, sideburn-to-sideburn beard and his restless hustler's demeanor, Foxx is often hilarious as Alvin Sanders, an addlepated, low-rent criminal who's convinced he's a master playa. In the better parts of the movie, Foxx is clearly not on script: He's doing impressions of Al Pacino in "The Godfather Part II," riffing about escaping from prison with Harriet Tubman and Kunta Kinte and generally being charming, ultraconfident and supremely wrongheaded. Maybe Foxx isn't actually an actor, but for me his shtick has about twice the screen appeal of either Adam Sandler's or Martin Lawrence's.

While incarcerated on Riker's Island for stealing shrimp from a Brooklyn, N.Y., warehouse -- actually, as Alvin points out to anyone who'll listen, he was stealing prawns -- he winds up with a dying cellmate who has stashed $42 million in gold somewhere in New York. The dying prisoner stole the gold, in turn, from a psychopathic computer geek (Doug Hutchison, the weaselly prison guard in "The Green Mile") who masterminded a burglary of Manhattan's federal gold vault. He's another one of those soft-spoken villains, and Hutchinson delivers the year's second-best take on the not-quite-John Malkovich type (after Vincent D'Onofrio in "The Cell"). But how was such a smart guy swindled so easily? And why did he pick an accomplice with chronic heart disease? These are questions without answers.

Doing his usual likable-cuss act, David Morse (who was also in "The Green Mile") plays the gruff Treasury agent who has a bug implanted in Alvin's jaw and releases him from prison. The idea, as far as I can follow it, is that Alvin is a lure meant to attract our techno-DJ-looking geek villain and the T-men want geek-boy to realize that. They also want him to assume that Alvin knows where the gold is hidden, but Alvin doesn't. Or doesn't exactly. I think.

Never mind all that. The upshot is that a roomful of white people wearing headphones sit around staring at monitors and listening to Alvin get into trouble. He plots more ineffectual crime with his even more good-for-nothing brother, Stevie (Mike Epps), who keeps saying, "I'm something like a pimp," engages in exciting car chases with a couple of indefinably ethnic hoodlums and puts his sweetest moves on estranged girlfriend Lisa (Kimberly Elise). Meanwhile, our evil mastermind -- reportedly based on a photo of Michael Stipe -- is several steps ahead of the feds, luring them into ambushes, breaking into their computers and generally plotting to capture Alvin and separate him from the information he doesn't possess.

This is all just dandy, as far as it goes. But Alvin is only fun as long as he's "the king of seafood," an anarchic, pathetic gangsta sprite totally certain of his own greatness. Inevitably, Fuqua and the screenwriters (Andrew Scheinman, Adam Scheinman and Tony Gilroy) decide that Alvin's going to learn some Lessons in Living and Loving. This is what always happens when action movies go on too long: A gray tone of moralism descends, as if this perfectly acceptable piece of trash, driven by Fuqua's promiscuous sense of style and terrific technical flair, had suddenly been taken over by Joe Lieberman.

Abruptly, the once-hapless Alvin gets all eager to beat down mini-Stipe and become a straight-up citizen for Lisa and the kid she had while he was in the joint. (Will anyone in Hollywood ever write a role for a black woman that isn't a sober, serious, saintly mama?) Neither Foxx nor Fuqua seems comfortable with this turn of events. Both they and the audience just sort of hang on grimly through the extended action climax, in which an entire racetrack is destroyed and our reborn family man morphs into a tough-ass Bruce Willis-style action hero.

Once upon a time, midlevel Hollywood directors could work their way through any of six or seven hackneyed story lines convincingly enough, but most lacked any individual sense of style or any willingness to stretch the medium in technical terms. Recently we've arrived at the opposite extreme. Like many commercial directors, Fuqua is a supreme technician who commands an impressive understanding of lenses, lighting, film stock, digital color manipulation and other conjurer's tricks. (I don't know who told all Hollywood cinematographers this year to dampen down the color scheme, making every movie look like it was shot in Seattle in February. I wish they'd cut it out, already.) But, for Fuqua and any number of other contemporary filmmakers, movies are essentially repetitive rhythmic structures built around action beats, more like hip-hop songs or Bach fugues than old-fashioned drama.

OK, fine. Action movies have been heading in that direction for decades now, and there are still film critics and scholars who will try to convince you that's somehow truer to the spirit of cinema. But when Fuqua isn't spinning the camera 360 degrees to follow a runaway Porsche, or chasing an army of doomed government agents into a booby-trapped building, his work becomes unfocused and dull. In between action scenes, Fuqua and the screenwriters keep sending up flares in different narrative directions: a ghetto father struggling with maturity, a crusty cop with a soft heart, a budding romance in the computer room, a compulsive criminal mastermind. These little interludes are not really story, of course; they're merely suggestions, providing just enough of the nostalgic flavor and aroma of story to make it seem as if the movie isn't wasting time until the next thing blows up. But it is. Sure, "Bait" is a hit. But even before it's over it's also a bore.