At a Gore concert fundraiser, Hollywood strikes back -- and gets nasty. 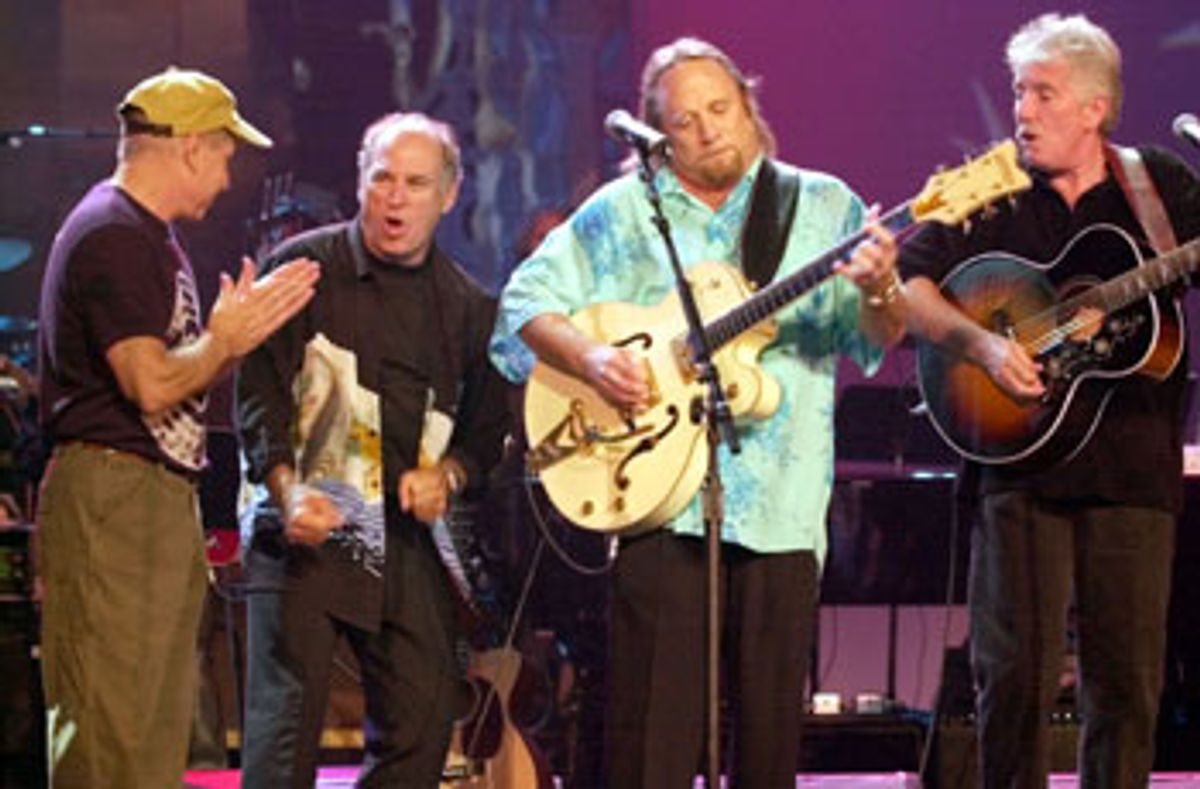 The event was billed as "The Concert" and was organized by Miramax co-founder Harvey Weinstein, Rolling Stone publisher Jann Wenner and VH1 president John Sykes. At the show, a whole bunch of celebrities -- microphones on -- ripped Bush apart, and in the process raised $6.5 million for Democratic contender Al Gore and the Democratic National Committee.

Actor Matt Damon, for example, said that Bush was "kind of like Fredo" (the dimwitted Corleone brother from "The Godfather"): "They didn't even let that guy run the family business, much less the country."

In her first foray into politics, Julia Roberts declared herself a Democrat. She said that the word "'Republican' in the dictionary comes just after 'reptile' and just before 'repugnant.'"

Actress Salma Hayek spoke a sentence or two in Spanish. She told the crowd, "That means, 'The air in Houston sucks!'"

The hostility cut across generations. During a set by '60s stars Crosby, Stills and Nash, Stephen Stills said that Bush reminded him of 1964 GOP presidential candidate Barry Goldwater: "The similarities are too intense."

"Here's a song we'd like to send out to the Shrub," he said. "It's called 'Helplessly Hoping.'"

It was all kind of like a greatest-hits mix tape from Hollywood to the Democratic nominee they've had to settle for as a replacement for the one who loved and emulated them just a tad too much.

Popping up between sets, Michael Douglas emceed, telling jokes so bad even the sycophantic Democratic showbiz types filling the hall didn't laugh. But Douglas' timing wasn't the problem; the whole event had timing issues, coming as it did one day after the Senate Commerce Committee held a hearing on a Federal Trade Commission report charging the entertainment community with marketing adult-rated products to children.

Indeed, as if he had no idea where he was going to be Thursday night, Gore spent much of the week jumping on the FTC bandwagon.

Here's a quote from Monday's New York Times: "'If I'm entrusted with the presidency,' he said, his voice rising, 'I am going to do something about'" the questionable marketing practices. On Wednesday, Gore's running mate, Sen. Joseph Lieberman, D-Conn., testified at the hearings, decrying the "culture of carnage."

The duo then went on to schmooze with Weinstein, whose company has produced some of the more violent and controversial films around, including "Priest," "Reservoir Dogs" and "Pulp Fiction." Both parties have scored more than $22 million in cash from the entertainment community -- though more than two-thirds of that has gone to Democrats, according to the Center for Responsive Politics.

Needless to say, the Republicans called Thursday night's fundraiser a kind of Hypocri-palooza.

Hours before Gore, Lieberman and their spouses sauntered into the cavernous concert hall, Republican National Committee chairman Jim Nicholson accused the Democratic presidential nominee of "speaking out of both sides of his mouth when it comes to marketing trash to our kids. To the American public, he says, 'Don't worry -- I'll crack down on these peddlers of filth.' To Hollywood honchos, he says with a wink and a nod, 'Don't sweat it -- we've been through this drill before, and you know I'm only saying this because I need to do it to get elected. Oh, and thanks for the cash -- keep it coming.'"

Inside, the entertainers returned fire at Gore's enemies with a continuing barrage of invective:

In a telegram Weinstein read to the crowd, actor Paul Newman expressed his regrets for his absence, and urged support for Gore's "campaign against the bad guys."

Another telegram, from actor Ben Affleck, said that he was telling everyone to "vote for the smart guy -- because, believe me, there's only one of those in this race." Another favorite slam among the entertainers was the GOP candidate's apparent inability to pronounce the word "subliminal."

Bush had been forced to use the word a number of times earlier in the week when his campaign came under fire for running, and then defending, a Republican National Committee TV ad that projected, for a fraction of a second, the word "rats" on the screen when describing Gore's plan for prescription drugs. Bush pronounced it something like "subliminable."

During his performance of "Margaritaville," Jimmy Buffett sang, "Wasted away again in Margaritaville/Searchin' for my lost shaker of salt/Some people claim that there's a woman to blame/But I know/It's that subliminable message's fault."

He and other entertainers made more risqui jokes. Heralding Gore's pick of Lieberman, Leguizamo cracked that Gore had just been following the principle by which "New York women have been operating for years: It takes a Jew to lick bush."

The bawdy Midler told members of the crowd that though she knew they were "all relying on [her] to do 'Bush and Dick' jokes," she would refrain, since she didn't want to embarrass Gore.

She did cause Gore to wince at least once, as the large-screen TV revealed, when she referred to his opponents as "major league assholes," the same term Bush used on Labor Day to describe New York Times reporter Adam Clymer.

The evening wasn't without references to the FTC report and the cultural crusade Gore and Lieberman have declared themselves to be warriors in. After thanking "all of you who manifested your support in such a meaningful way" -- i.e., ponying up $6.5 million for the Democratic National Committee and his campaign -- Gore said, "It's wrong to market inappropriate material to children ... We care about this very deeply."

The entertainers didn't seem to mind. Leguizamo joked that to be there, the crowd "had to take time off from jobs where we push lots of sick and demented material on the youth of America."

Midler, who has a new TV show this fall, joked that during the "sweeps" ratings period, Lieberman would "be chasing me with a broom."

Other celebrities kept their remarks more upbeat, or at least issue driven. Jessica Lange urged female voters not to sit out the election; she charged that Bush's Supreme Court nominees would turn back the clock to the days before the legalization of abortion.

Harrison Ford said that he thought Gore was "sincerely committed to education and the environment," and that "the vice president will follow through on his promise" to reform the financing of political campaigns so "vast sums of money don't need to be raised again."

But the troubadours seemed more motivated by their hatred for Bush than any love for Gore. Still, several dutifully read snippets of plugs for various Gore policy proposals -- his prescription drug plan for seniors, smaller class sizes, free good stuff for good people -- from the teleprompter.

The entertainment community's relationship with both Gore and his wife, Tipper -- who made a name for herself attacking the music industry in the mid-1980s -- has been spotty at best, if not downright bipolar.

He flew to Hollywood to tell entertainment moguls that he'd had a change of heart, saying that the hearings were "a mistake" that "sent the wrong message," according to the Washington Post, and saying, according to Daily Variety, that he "did not ask for the hearing" and "was not in favor of the hearing."

Whatever his true feelings, with the notable exception of Bruce Willis, Tinseltown's song-and-dance men and women seem to have decided that Gore's the man.

Perhaps they would find comfort in the fact that, as reported by the Associated Press on Thursday, Bush has his ties to the seamier parts of the entertainment business himself. He earned more than $100,000 on the board of Silver Screen Management, "a company that financed more than two dozen R-rated movies, including one in which a hitchhiker rips a young woman's body in two," the AP reported.

(Variety called the movie, "The Hitcher," "a highly unimaginative slasher film that keeps the tension going with a massacre about every 15 minutes.")

Or maybe not. After all, Wenner's Rolling Stone used to make a regular feature of bashing Tipper Gore for the PMRC's crusade. Thursday night, Wenner instead slid his hand lovingly on the small of her back. The entertainment community has apparently decided to take a lesson from one of the Crosby, Stills and Nash songs performed at the gala: "If you can't be with the one you love/Honey, love the one you're with."