Rebecca Corneau may be a religious extremist whose gross negligence allowed her last baby to die. But experts still contend she has the right to do whatever she pleases with her fetus. 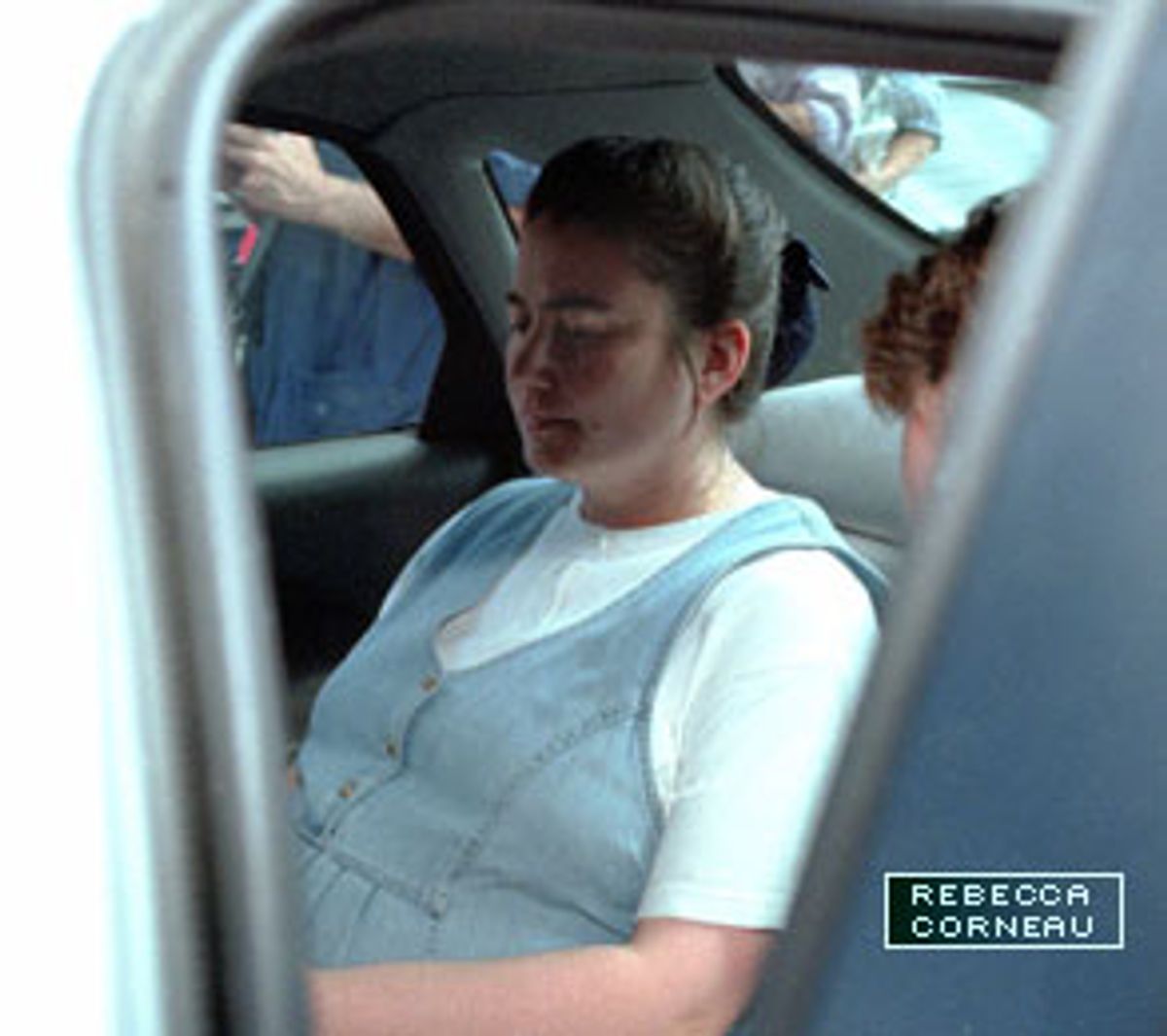 For years, Rebecca Corneau lived quietly with her husband and three kids in an unremarkable duplex in the Boston-area town of Attleboro. With a white picket fence and a lawn dotted with toys, the family home appeared at first blush to embody the very essence of unexceptional suburban life.

But it wasn't the patch of Americana that it seemed: Corneau and her husband are members of a clannish religious sect that calls itself a "sovereign nation."

The group of a dozen or so adults from three interrelated families rejects most aspects of mainstream society and governmental authority, adhering strictly to what they interpret as the tenets of the Old Testament. They home school their 13 children. The men sport long beards while the women often wear dresses that cover them from neck to toe. And perhaps most significantly, they don't believe in conventional medicine, regarding it as blasphemous. "Only one holds the key to life and death, and that's God Almighty himself," Rebecca's husband, David, was quoted as saying by the Washington Post.

It is this belief that has made Corneau the center of a roiling debate about the rights of women to refuse medical care on behalf of their unborn children. Now eight months pregnant and awaiting the birth of her child under the watchful eyes of armed guards in a medical facility, she has become the unlikely poster child for pro-choice activists and an eerie specter of things to come for medical ethicists who are concerned the case forecasts an erosion of important individual rights.

How Corneau found herself at the center of this imbroglio is a strange tale. Despite her group's contrarian ways, they had managed to maintain a peaceful, uneventful existence in their ordinary neighborhood. Then last November an ex-member turned in a fistful of diary entries (by whom it is unclear) indicating that the group sat by and watched Corneau's last child, a boy named Jeremiah, choke to death within moments of birth. Group members say Jeremiah was stillborn.

The diary entries also suggested that another member's child had starved to death after sect members received word that God wanted the baby to get by just on breast milk.

The local law pounced vigorously. Bristol County Police trotted out a backhoe and cadaver-sniffing dogs to the homes of cult members and to a forest in Maine for a series of televised, but ultimately fruitless, grave-digging expeditions.

Since then, the story has unraveled into ever weirder iterations as county officials who sought to censure the sect began to exhibit their own idiosyncrasies.

After the court convened a special grand jury to look into the allegations, the group's men refused to answer questions and ended up being cited for contempt and thrown in prison. Months dragged by, and still the investigation failed to turn up enough evidence make a criminal case. Then this summer Juvenile Court Judge Kenneth P. Nasif declared the group members unfit parents and removed the 13 children from their custody.

At each step along the way, investigators have said they hoped one of the sect members would crack and start talking about how the babies died and where they had been buried. But so far not one member has offered any significant testimony.

Investigators fell back on their only evidence, poring over journal entries in search of clues into the sect's isolated lives. According to local press reports, they often referred to the Bible to interpret the cryptic journal entries. "Of 4 billion inhabitants presently breathing, only a handful are being trained," one entry says ominously. "The rest are tools of Satan to try and destroy God's anointed."

Nasif answered the sect members verse for verse, thrashing the sect's leader with a quote from the Book of Jeremiah, Chapter 23: "'I am against those who prophesy false dreams,'" he said. "I want you to think about that."

As the months passed, Rebecca Corneau grew larger. Gradually her swelling belly focused the public gaze on the baby yet to be born, drawing attention away from the search for dead babies. Investigators contended that Corneau could have saved her last baby with a simple clearing of his air passages. After all, if she allowed her other baby to die, couldn't it happen to this one as well? Wouldn't it be safer for her to subject herself to a little medical inspection?

"We'd like to make sure that this doesn't happen again," says Eddie Sirois, chief of staff for the Bristol County district attorney. "We're afraid that something will take place. We're looking to make sure that baby has a shot."

On Aug. 31, Nasif ordered Corneau into a guarded medical facility where officials can be on hand -- and medical professionals can be on call -- to protect the fetus the instant it is born into the rights society accords children. In explaining his ruling, he said he could practically hear Corneau's unborn child begging for his protection: "'I want to live,'" said the fetus-channeling judge, according to Gerald FitzGerald, a prosecutor who attended the closed hearing. "'I don't want to die. I don't want to die like my brother Jeremiah did.'"

As soon as word of the ruling got out, abortion activists from around the country appeared on Bristol County's doorstep, ready to argue for the rights of a religious recluse with no use for medicine or feminism. In the weird world of abortion politics, the most unlikely people become heroes. Because officials often test the limits of their power on people at the fringes of society, activists frequently find themselves standing up for the rights of crackheads, welfare mothers, cultists and all sorts of people they'd never talk to over a bowl of nuts in a bar.

"However much we dislike Rebecca Corneau, it's essential to remember that the Constitution that protects her is the same one that protects you and me," says Wendy Murphy, a Boston women's rights lawyer who has asked a higher court to review Nasif's decision. "I'm very concerned about the way that my Constitution and due process is at stake. I see it as a threat to me."

Experts say they know of no case like Corneau's, in which a pregnant woman is being locked up because of something she might do to harm the child at the moment of birth and after.

"You can't lock someone up for 'what if,'" Murphy says. "This is a total, complete denial of liberty. There's no reason to do it. There's not even a smidgen of evidence. It's very weird."

"It's bizarre," says Arthur Caplan, professor and director of the Center for Bioethics at the University of Pennsylvania, who likens Corneau's confinement to locking up a suspected embezzler because you think he might embezzle again.

"We don't arrest somebody because in the future they might commit some crime," agrees Lynn Paltrow, a leading women's rights attorney and director of the National Advocates for Pregnant Women. "We do not arrest or imprison people because a local prosecutor has a suspicion -- without a trial and without enough evidence to even bring criminal charges. That's not supposed to happen in our society."

While huge swaths of society believe a woman should not be allowed to harm a fetus, the law at the moment says that not only is abortion legal (within certain limits depending on state laws), women also have a right to refuse medically necessary care, to smoke, drink and do any number of potentially harmful things while pregnant.

In cases where pregnant crack addicts have been locked up to protect the fetus from the woman's drug habits, the courts have ruled that a woman cannot be denied her liberty to protect the fetus. By the same token, in cases where doctors went to court to force women to have "medically necessary" Cesarean sections and other procedures, appeals courts unfailingly have ruled that a woman has the right to refuse care -- even when doing so might harm the fetus.

Abortion foes say Nasif's decision is a triumph for those who believe the fetus deserves more rights and protections. But Bristol County officials say Corneau's case is not about abortion, a woman's right to choose or anything besides Corneau and the fetus inside of her.

Roe vs. Wade "doesn't even come into play," says Sirois of the district attorney's office. "It's not a cause, it's one particular case. We're doing this to protect the child. That was our goal from day one. To protect the unborn child."

And how can any district attorney possibly argue that a case like this is about saving one baby, and not about challenging the way society views and treats all pregnant women and all fetuses?

"Where did he go to law school? He's such an idiot," says Murphy.

Miraculously, the abortion foe and abortion rights camps do manage to agree on one thing: The battle over Corneau's fetus shows without question that the argument over fetal rights is nowhere near settled.

While the courts may have reached a consensus on the rights of women's reproductive autonomy, many people around the country don't happen to agree with that consensus -- and some of them are running local law enforcement, judicial systems and medical facilities.

"There's an incredible disconnect between expert judgment and local practice," says Thomas Murray, president of the Hastings Center, a bioethics research institute in New York. Though legal, medical and ethical panels almost uniformly agree that it is wrong to imprison a woman to protect a fetus, local authorities are constantly challenging that consensus with arrests like this one, he said.

"We hear about it a lot," Murray says. "More often than you'd think." As out of line as this arrest appears to many experts today, in the long run it might not be the aberration it seems: Some experts believe the case is a sign that times are changing, and that society is pushing into a new conservative era in which a woman's rights over her body do not reign so supreme.

"I think we're moving in the direction of a more authoritarian government and away from the rugged individualism that's characterized this country," says ethicist Dr. Stanley Korenman at UCLA. "More and more rules are passed that limit our personal lives."

"You're going to see pressure built to weaken the woman's right to control her body," Caplan says. "I think this case will be a forerunner, not an aberration."

But Caplan's crystal ball sees the changes coming gradually: For now, "this kind of case will be tossed. They (the district attorney) will be sued, the [Lynn] Paltrows will win. We're not ready to have a policeman in every pregnant woman's house."

"We always have to be on heightened alert," Murphy says. "We have to be careful, because it's easy to pick on the rights of people we don't like. But you start making exceptions, and that's it."