Candidates increasingly use music to bolster their media image. But Sting and Mellencamp have told Bush to back off. 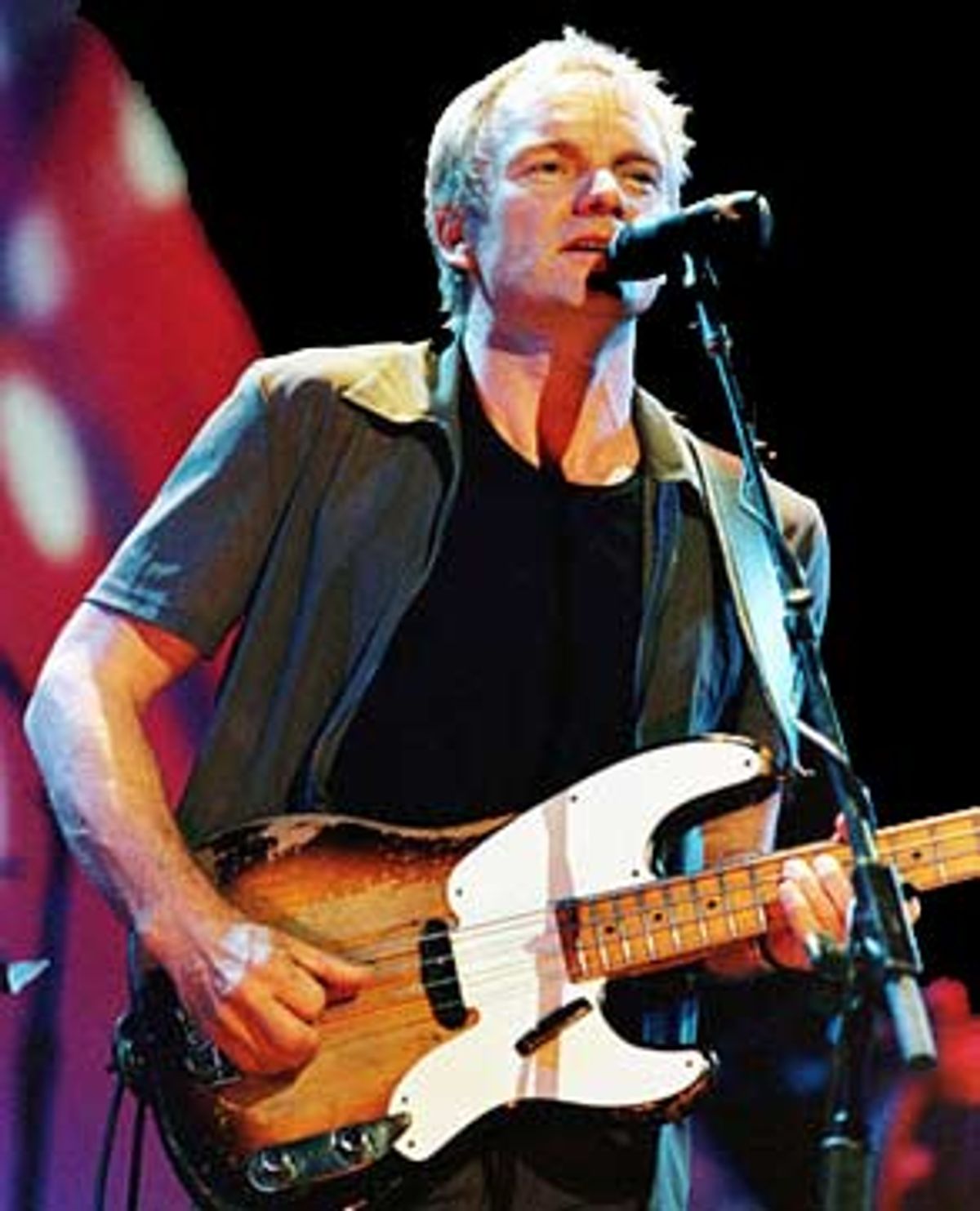 Music purists tut-tutted when, this past spring, Sting shilled the second single off his new album for a Jaguar ad. His people responded that, hey, the ad was simply a way to pitch new music to the widest possible audience.

"It doesn't take a genius to figure out why Sting wouldn't want his music associated with the Bush Republican presidential campaign," says a source close to Sting.

Stings manager, Miles Copeland (brother of Sting's former Police-mate, Stewart Copeland), claims the British singer simply doesn't want to take a side in an election in the country where he is "a guest." "It's not a polite thing to do," Copeland says, adding that he soon will tell the Gore campaign, too, to stop using "Brand New Day." Still, the song was nixed from the Bush lineup months ago.

Sting's rebuff was nowhere near as polite as the one that came from John Mellencamp, who was miffed at Bush's use of his ditty "R.O.C.K. in the USA." Over Labor Day weekend, the Indianapolis Star reported that Mellencamp had his people call Bush's people to tell him to stop. "They said OK, and then used it anyway," the self-described "liberal" singer told reporters after a free Aug. 31 concert in Bloomington, Ind. "What am I going to do? Am I going to sue the guy -- that seems a little silly -- and make a big ruckus out of it?"

Of course, entertainers tend to be more liberal (filmmaker Robert Altman recently promised to move to France should Bush win), but medium-size musical-political ruckuses are erupting like never before -- because this year, pop songs are being appropriated by politicians at a fast and furious pace.

Popular music has been a part of politics since long before "Happy Days Are Here Again," FDR's theme song, of course. The Rat Pack sang the national anthem at the 1960 Democratic convention. Massachusetts Gov. Mike Dukakis highlighted his ethnic immigrant roots by playing Neil Diamond's "America" at the 1988 Democratic Convention, while at the Republican equivalent then-Vice President George Bush surfed a wave of economic contentment (and foreshadowed his elitist cluelessness) by playing Bobby McFerrin's "Don't Worry, Be Happy."

Keith Nahigian, who was in charge of scheduling and advance for the campaign of since-vanquished Arizona Republican Sen. John McCain, says that there's a reason for both the increased use of music and the increased controversy. "Music is the key to the whole crowd," Nahigian, 32, says. "The addition of newer rock music in politics went along with the music explosion and also the media explosion. Before we only had three networks ... Now we have six channels a day, plus local news is having more of an impact -- we have to put on more of a show."

And in this era of controversy over citizens using Napster to download songs for free, it would seem that politicians are appropriating pop music for their own purposes with equal abandon. Mike Glabicki, the lead vocalist, guitarist and songwriter for the band Rusted Root, says he had mixed feelings when he heard his song "Send Me On My Way" played as background music during the Gore biopic.

"I'm generally usually excited to hear my music played anywhere," Glabicki says. "But after thinking about it, I thought it was kind of strange that Gore played it without asking us first. Because it's perceived that we are backing him and therefore we accept his use of our music. But he never asked."

But in this era of cultural crusaders -- like Gore, wife Tipper, his running mate, Sen. Joseph Lieberman, and, of course, Lynne Cheney -- the question is no longer even whether or not it's fair, but just what are the lyrics in question? It's a question advance staffers have been on top of ever since it reached a crescendo during the GOP presidential primaries.

After Arizona Sen. John McCain joked that his favorite band was Nine Inch Nails during the Jan. 6 GOP debate in Durham, N.H., Alan Keyes called him to task for the prolific use of "the F-word, and other kind of vulgarities" favored by NIN. McCain tried to explain the episode as an attempt to be funny. "Yes, I was trying to be amusing and entertaining, and it was a poor choice."

But then less than a month later, at the Jan. 26 debate in Manchester, N.H., Lilliputian Christian conservative Gary Bauer turned the tables on Keyes, slamming him for having jumped into a mosh pit while a Rage Against the Machine tune blared -- though he thought the group might have been named "The Machine Rages On."

Also in January, immediately after then-opponent Steve Forbes tried to slam Bush as being the same kind of tax-raiser in sheep's clothing that his father proved to be, the Bush campaign stumbled into an awkward musical metaphor when a campaign event featured the Harry Chapin song "Cat's in the Cradle" as part of the soundtrack.

The tune, about a son who repeats the mistakes of his father, was not lost on the media.

To make sure that mistake never repeated itself, the Bush campaign set upon creating its own CD, with songs containing lyrics that staffers made sure wouldn't divert attention from Bush's message. One Bush advance employee told Salon that the CD had black X's marked next to songs the campaign is no longer allowed to play, per the artists' requests. Those not X'd out include John Fogerty's "Centerfield" and Tom Petty's "I Won't Back Down." Los Lobos' "La Bamba" and Tejano singer Emilio's "Juntos," which means "together" and was specially written for one of Bush's gubernatorial campaigns, are sometimes trotted out if the self-described "compassionate conservative" has a Latino-themed event, according to Bush spokeswoman Mindy Tucker.

But holding the lyrics of a song against a candidate has hardly been applied just to Republicans. After her Senate campaign announcement on Feb. 6, for instance, first lady Hillary Clinton was slammed by then-opponent Rudolph Giuliani, for sending a "dangerous message" of "Let's say yes to drugs" by playing the Billy Joel song "Captain Jack."

In actuality, "Captain Jack" is an anti-drug ditty that details the pathetic life of a drug user. Additionally, according to a source on Clinton's campaign, the song was played accidentally by an employee of one of the companies hired to help produce the event who inserted a Joel CD into the stereo thinking "New York State of Mind" would be a nice touch.

No matter. Giuliani saw an opening. Some saw the mayor's press conference as something of a stretch. It's a fair question: Should politicians be held responsible for the songs they play at their rallies? All they're trying to do, after all, is rev up the crowd.

On the other hand, politicians routinely hold up music and other items of pop culture to scorn in order to score political points. Republican presidential nominee Bob Dole lambasted Hollywood for movies he hadn't even seen, Al and Tipper Gore pushed for warning labels on record albums, and Vice President Dan Quayle picked a fight with sitcom character Murphy Brown. It's hard not to see the poetic justice in holding them responsible for the pop culture they exploit for their own purposes as well.

Music has been a key part of Gore's rallies, where the O'Jays' "Love Train," Tina Turner's "Simply the Best," REM's "Stand," Mellencamp's "Small Town," Stevie Wonder's "Sir Duke," Garth Brooks' "We Shall Be Free," the Dixie Chicks' "Ready to Run" and Shania Twain's "Rock This Country" have been played. Additionally, if Tipper's in the house, you might hear Wonder's "Isn't She Lovely" and Sister Sledge's "We Are Family."

Gore's reliance on tunes can be seen as more than a bit ironic, in that it was just a couple decades ago that his daughter Karenna's questions about the provocative Prince song "Darling Nikki" set Tipper on a crusade to smack warning labels on albums with controversial content, thus earning the ire of the music industry.

Still, music is a key component of Gore's rallies, to the point that his tag-line promise to crowds, "You ain't seen nothin' yet," is lifted directly from the tune that often plays after one of his energetic stump speeches -- Bachman-Turner Overdrive's "You Ain't Seen Nothing Yet."

Reached in Winnipeg, Manitoba, Fred Turner of Bachman-Turner Overdrive -- whose "Takin' Care of Business" is occasionally played by Bush -- says, "It doesn't make any difference to me, really. I'm a Canadian, anyway, so I'm not involved in this election. If it helps them, and if they like it and it puts the message across, it's fine with me. I think it's a good thing for us."

And from Great Britain, Norman Cook -- aka Fatboy Slim -- told MTV News that he thought Gore's occasional use of "Praise You" is "quite funny." Others do, too, pointing out that the lover's realpolitik expressed in the techno-song -- "We've come a long, long way together/through the hard times and the good/I have to celebrate you baby/I have to praise you like I should" -- is an interesting metaphor for Gore's relationship with voters, to say the least.

But Cook likes it "because it gets on the news in England, and my mum will ring up and go, 'I heard your tune on the news,' So, on one hand it's kind of funny, a riot. My mum doesn't watch MTV or pop programs, and to get my music on something she'd see is quite a thrill. I haven't examined all of Gore's policies and politics but ... thank God it wasn't the Republicans. I would have had to sue!"

Rusted Root's Glabicki agrees with this general take on his song's appropriation. Though he was slightly miffed about Gore using his song without permission, he says, "if it had been Bush I would have been infuriated. I happen to think Gore's the best choice for where this country's at at this point. He's not the ideal candidate, but he's the best choice so I didn't mind."

Still, he says, there's a larger issue at stake. "I think they should contact the artist before they use your song. Where do you draw the line? How far can you go with it? Can Gore lip-synch to it and put on a show? ... A candidate has the ability to really push it where it really becomes harmful. If it was Bush I would think it was harmful to the band and the image of the song. Since it was Gore, I didn't really have a problem."

But Glabicki wonders about the day that some politician uses the song "to portray an idea or a concept that I have that maybe I wouldn't believe in. When Clinton used that Fleetwood Mac song, he asked them first. And that's just the way it should be. If it's going to look like [the] band is supporting you, they should be asked if they want to do that."

Those days, apparently, have already since passed.