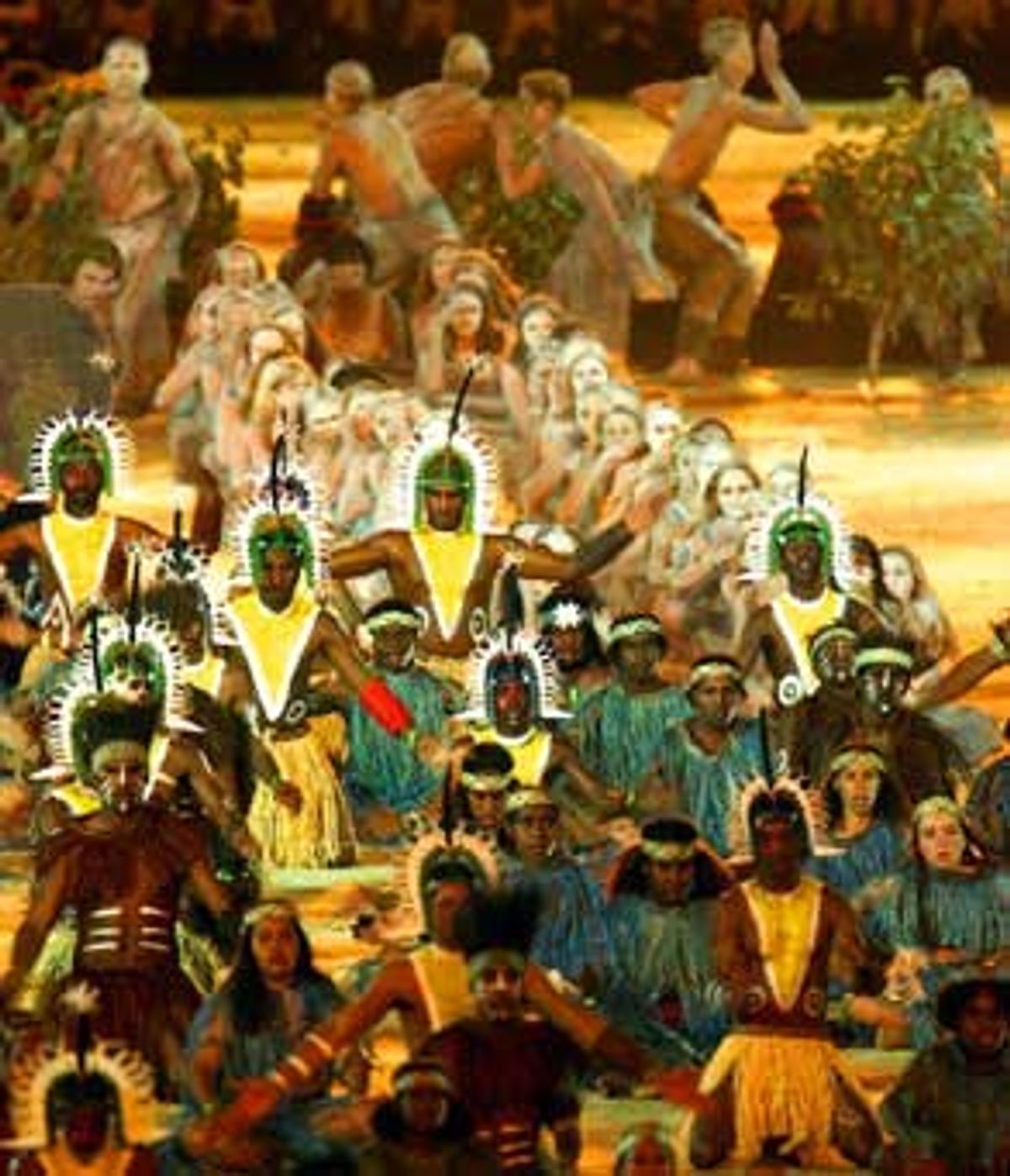 The opening ceremony of the next Olympics will start with enormous robots blasting craters on Uranus, followed by Sauron disappearing into Mount Doom and concluding with the battle of the Titans vs. the Olympic deities, staged on a flaming asteroid.

It will take something of at least that magnitude to trump the staggering pyrotechnic display -- Cecil B. Demille meets "Fantasia" meets Survival Research Labs meets half the teenage population of Australia -- that opened the Games of the XXVII Olympiad before 110,000 roaring spectators in the vast, spanking-new Olympic Stadium Friday.

Over the course of the last few Olympics, the opening ceremonies have become exercises in blow-your-mind one-upmanship. I'll see your flaming arrow lighting the Olympic Flame and raise you a seven-ton flaming cauldron that will be lifted out of a miraculously appearing waterfall and carried hundreds of feet through rushing, multicolored streams of water. You gonna pull some heart-tugging old five-gold-medalist swimmer out of retirement to carry the torch? We got Muhammad Ali, chump. But with this stunning four-hour extravaganza, Sydney has now put the thousands-of-tapdancers bar up so high that maybe the production-values brinkmanship will finally stop. And that might not be a bad thing.

Olympic opening ceremonies are always wonderful -- you can't screw them up no matter how hard you try. The Games are simply too big, too essentially dignified, to be emotionally kidnapped by some ad man with a big budget. But they're prone to the kind of scientifically researched emotional manipulation found in telephone ads -- those exquisitely crafted little corporate narratives that get you blubbering in 22 seconds, or even less if you have a hangover. Combine plodding and/or smarmy story lines or concepts with the usual clichis -- cute li'l tykes singing their hearts out, inspirational pop ballads sung by hyperbolically emoting big-haired singers -- and add, God help us, marching bands, and the treacle factor can be extreme. We're not talking Super Bowl halftime levels of horror, but you hate to see the august Olympics coming even anywhere near that depraved universe.

Sydney's performance didn't. It was by far the most technically advanced and artistically sophisticated opening ceremony ever at an Olympics. The show conceived by director of ceremonies Ric Birch and artistic director David Atkins was so audacious, so brilliantly executed, that even its sentimentality seemed forgivable. From the moment that the little "Hero Girl," played by Nikki Webster, soared into the air as beautifully designed enormous fish floated about in a beautifully realized dream sequence, you realized that people with both a genuinely theatrical and a visual sensibility had been involved in the project.

There was that rarity in big production numbers, lovely original music (particularly in the "Nature" sequence), communicated to the audience by a remarkably good sound system. The "Tin Symphony" was nothing short of inspired -- Joan Mirs would have been proud of those squiggly machines. And, of course, there was that stunning finale, with Aboriginal runner Cathy Freeman casting her fire upon the waters.

Yes, there were those inspirational pop ballads -- is there some law that every Olympics must feature some crooner hitting the endless high note on a song about following your dream? -- but even those were redeemed by original staging: when Olivia Newton-John and John Farnham walked right in the middle of the surging host of athletes as they sang, it was genuinely touching, not least because the athletes themselves seemed touched.

As for the lengthy scenes paying homage to Australia's Aboriginal people, they could be viewed, if one were cynical, as ass-covering kitsch, but since the Aborigines' major political issue is simply that white Australia apologize to them (which the current administration oddly refuses to do), the benign, comfortingly anthropological sentiments expressed in the scenes seem unobjectionable, if hardly challenging.

So it's hard to imagine how it could have been much better. And yet the glorious show still left ever so slight a taste of unearned emotion. That probably isn't so bad -- part of the joy of the Olympics, like Christmas, is letting yourself believe that magic is alive, and dreams are free. Maybe it's more that the emotion didn't quite link up with the actual drama that was both unfolding before our eyes, and that is about to, in the 16 unknown, glory-drenched days ahead.

For what is truly unique and moving about an opening ceremony is not the artistry of the pageant, no matter how inspired, but the parade of athletes. There are a staggering 10,000 athletes from 200 countries at the Games. And when each nation enters the vast arena to the cheers of the crowd -- Armenia, Aruba, Austria, Azerbaijan -- it's the only time that the world really gets to look at itself, It's a stirring ritual, nationalism without the ugliness, a Noah's Ark of sport in which every single human animal -- whether they win gold, or win nothing -- is respected. And as the procession unfolds they're just as thrilled by the moment, all those beautiful young brown and yellow and black and white people happily walking along in their ill-chosen headgear, as the countless millions watching them.

And watching this real United Nations, this U.N. of the spirit, it's hard not to try to imagine what it would be like if the family of man really lived up to its name. Certainly the Aussie-dominated crowd showed its heart, cheering loudly when North and South Korea entered together for the first time and roaring when it was announced that East Timorese athletes were competing as so-called individual Olympic athletes. (Australia has sent troops to help the beleaguered young nation.) It's true -- the Olympics rarely change anything. But in an age without festivals, without much of anything besides Starbucks and Visa cards to bind the world together, it's worth something that an old image still touches something in us: a black-and-orange vase with men running, forever, across a silent field.

And that's what we'll remember, when the dazzling tributes have faded away. We'll each have our own personal piece of these games, and we'll make up our own stories, write our own tunes, celebrate our heroes our way. Sydney -- which richly deserves its reputation as one of the world's great cities, but more of that later -- poured its heart and soul into pulling our heartstrings, and did a superb job. Now it's our turn to find our own glory. There shouldn't be any shortage.

Next dispatch: The Games begin. Kamiya reports on swimming, beach volleyball and football.