The approval of RU-486 isn't about morals, it's about options. 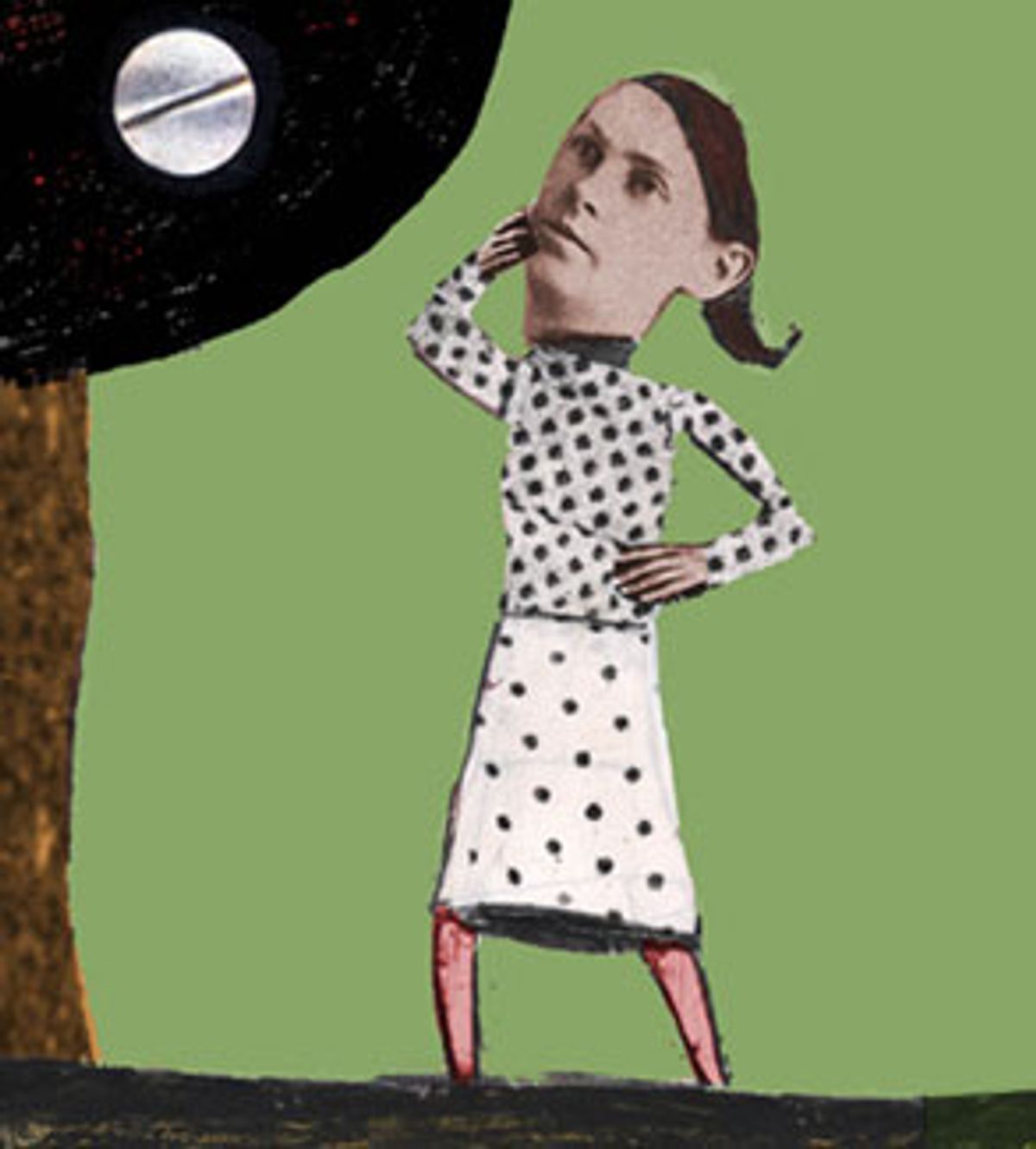 The nurse prepares to capture my answer, her pen poised over a sheaf of response forms. I hesitate, a little afraid to answer truthfully. But this was a study. How were other women going to know what they were missing if I withheld the truth?

Now it was the nurse's turn to hesitate. "Empowered? How so? Could you explain that?"

How could I explain how much the abortion had changed me? An unwanted pregnancy is terrifying, paralyzing. When the line appeared on that urine-soaked stick my life came to a standstill. My body was a strange vessel, harboring something that threatened to sabotage the rest of my life.

My initial reaction was denial, followed by a desire for the whole situation -- the pregnancy, the doctor's visit, the difficult choice ahead -- to go away. If I wanted to regain control of my body, I needed to terminate this pregnancy. But in order to do that, I would have to relinquish control and endure what I understood to be my only option: invasive surgery performed by a stranger. Under the circumstances, I wanted the ordeal finished immediately.

Making the decision to terminate a pregnancy or to bring a fetus to term is by far the most wrenching experience I've ever had. The right to choose is not a luxury; it is a responsibility that demands intense introspection and awareness. It is frequently suggested that abortion itself causes undue psychological strain, exhibited by depression, nightmares and feelings of loss and regret. In fact, most of those symptoms come from the process of discovering an unwanted pregnancy and choosing what to do about it.

My abortion counselor was very supportive. She listened patiently to my tight, teary voice. Somehow, in the midst of all my questions and worries, she managed to tell me about a procedure that didn't involve surgery. It could be done immediately, not at the seven-week point, which was two weeks away. I could avoid all the invasive metal instruments. I could do it at home, where I would be in charge of my level of comfort, privacy and activity.

The safety and efficacy of RU-486 (mifepristone) as an abortifacient have been documented in France for almost 20 years and in the U.S. -- for research only -- since 1996. In most American studies, mifepristone is administered orally in the doctor's office. The drug works to block the production of progesterone, a hormone that is necessary for the maintenance of pregnancy. (Progesterone facilitates the embedding of a fertilized egg in the uterine walls and suppresses the uterine contractions associated with menstruation.) A second medication involved in a medical abortion, misoprostol or Cytotec, is taken at least 24 hours after mifepristone. Misoprostol induces contractions, allowing a "miscarriage" to occur.

The approval of RU-486 for use in the United States has yet to happen. The Bush administration banned its importation in 1989, which prompted Roussell Uclaf, the French manufacturer and patent holder, to refuse to begin trials here. Only a letter from President Clinton persuaded the pharmaceutical company to grant U.S. rights to the Population Council, a nonprofit New York agency that promotes reproductive issues worldwide. Manufacturing, distribution and legal troubles have bogged down the process, but the U.S. Food and Drug Administration is scheduled to approve mifepristone -- with some potential restrictions -- by Sept. 30.

I became one of the thousands of women to participate in the preapproval studies of RU-486. On the day of my appointment I sat on the examining table, fully dressed. The nurse handed me the pill along with a paper cup of water. "After you take this pill there is no backing out."

I nodded. I felt like I held my future in the palm of my hand -- one little white pill, no bigger than a tablet of aspirin. I swallowed and that was it. I received a packet of the vaginal tablets and a final reminder about appropriate misoprostol use, and I was on my way. On the drive home, I imagined I could feel the progesterone decreasing throughout my body.

In several mifepristone/misoprostol trials, including mine, women were allowed to administer the misoprostol themselves, in the privacy of their own homes, allowing them full control over the experience. The at-home procedure was relatively easy. There were cramps, the pain stifled by regular doses of ibuprofen. Bleeding began within half an hour. I lay in my own bed, my husband in the next room. Expulsion of the fetal tissue takes four hours or more -- a slow pace I welcomed after the panicky weeks that came before. For the first time since my positive pregnancy test I began to regain control over my body and my anxiety.

For weeks after the abortion I would turn to my husband at random moments to say, "I know this is strange, but I feel like the abortion was a good experience." I felt so strong. Unwanted pregnancy is something that every sexually active woman fears. I had faced that fear and, in the process, reached deep within myself to evaluate my beliefs, my priorities and the value of life. I didn't expect such strength to emerge after the abortion. Wasn't I supposed to be anxious and filled with regret?

I was surprised to learn that feelings of increased self-esteem and well-being after an abortion are not uncommon. Not only is abortion a psychologically benign procedure, but women who have had one abortion have higher overall self-esteem than women who bring an unwanted pregnancy to term, according to a 1992 study published in the journal Professional Psychology.

A 1989 study published in Family Planning Perspectives even controlled for self-esteem, dividing women into three groups at the time of their pregnancy test: not pregnant; pregnant and had a child; and pregnant and had an abortion. There were few initial differences between the women, but during follow-up it was found that women in the abortion group scored significantly higher on self-esteem.

Though only a minority of women, usually those who are predisposed to depression, report feelings of loss and emotional turmoil after abortion, negative psychological effects are often considered the norm. Information about "post-abortion stress syndrome," a condition whose existence is not recognized by the American Psychological Association or the American Psychiatric Association, is readily available to women who have negative post-abortion feelings. Positive feedback, however, is often lacking.

Because it is accepted cultural lore that women always regret their abortions, women who have positive feelings often shy away from speaking out. Though it is a legal choice, abortion still is stigmatized as a "necessary evil."

Conflicting political, religious and personal views about abortion have clouded the debate about the use of RU-486. Medical abortion is not about legality or morality. It is about choice -- but not the choice of whether to end an unwanted pregnancy. Instead, it is an option for the method of terminating a pregnancy. Why should a woman's right to choose end once she has decided to get an abortion? Is it fair to limit the ways she can take advantage of a basic right?

According to a report published in the Journal of the American Medical Women's Association, women of various races, ethnicities, education levels and socioeconomic backgrounds in the United States have reported their satisfaction with the mifepristone-misoprostol medical abortion. The primary appeal of medical abortion appears to be the option of aborting at home.

Besides avoiding invasive surgery, women who used RU-486 reported that the medical abortion seemed more like a natural miscarriage, even though they understood it was produced by a pharmaceutical. They benefited from having a partner or friend with them during the abortion, something that is not allowed at most abortion clinics; and medical abortion counselors spend twice as much time with women as do the counselors for surgical abortion, giving women more time to ask questions and further solidify their abortion decision. As one study participant stated, "The fact that you insert [misoprostol] yourself is a feeling like ... this is my choice ... my decision. There's so much more power in it."

RU-486 made my abortion experience less stressful, almost enjoyable. I was not required to lie undressed while a doctor probed and poked inside of me. I took a pill; I terminated the pregnancy; I spent the afternoon with my body, in the privacy of my own home, regaining power. There was no one else I could blame for the outcome, but more important, there was no one else who could take credit for my new strength.

Even though the privacy afforded by the use of RU-486 is cited often and enthusiastically by women in medical abortion studies, the FDA has indicated a preference for restrictions on mifepristone use and distribution that would limit this benefit of the drug.

The agency wants to limit mifepristone distribution to doctors certified to perform surgical abortion. Because the number of doctors who perform this procedure has dwindled in the past 10 years, access will not be as widespread as it could be in the hands of nurse-practitioners and physician assistants. This measure also would make the lives of the few doctors who perform surgical abortions even more dangerous, simply honing their profiles as targets of anti-abortion activists.

The FDA also wants to require the registration of all medical abortion providers with a third party, such as the National Abortion Federation. This list would be made public, a move that further heightens the danger for these doctors. In addition, the FDA wants to require doctors who administer RU-486 to be within one hour of emergency rooms to which they have admitting privileges, a requirement that goes even further to keep medical abortion out of the hands of qualified nurse-practitioners and physician assistants.

Even if the FDA approves mifepristone without restrictions, state laws regulating abortion will apply to the new procedure, raising questions about the logistics of fetal tissue disposal and the differences between surgical and pharmaceutical procedures.

The studies on RU-486 completed thus far have opened the door to private, individualized reproductive control for thousands of women. There is no reason why all women, regardless of their feelings about unwanted pregnancy, shouldn't have every option available to increase control over their fertility -- and their lives.

S. Boyd is a medical editor living in the Northeast.