Can napping improve the world and your health? 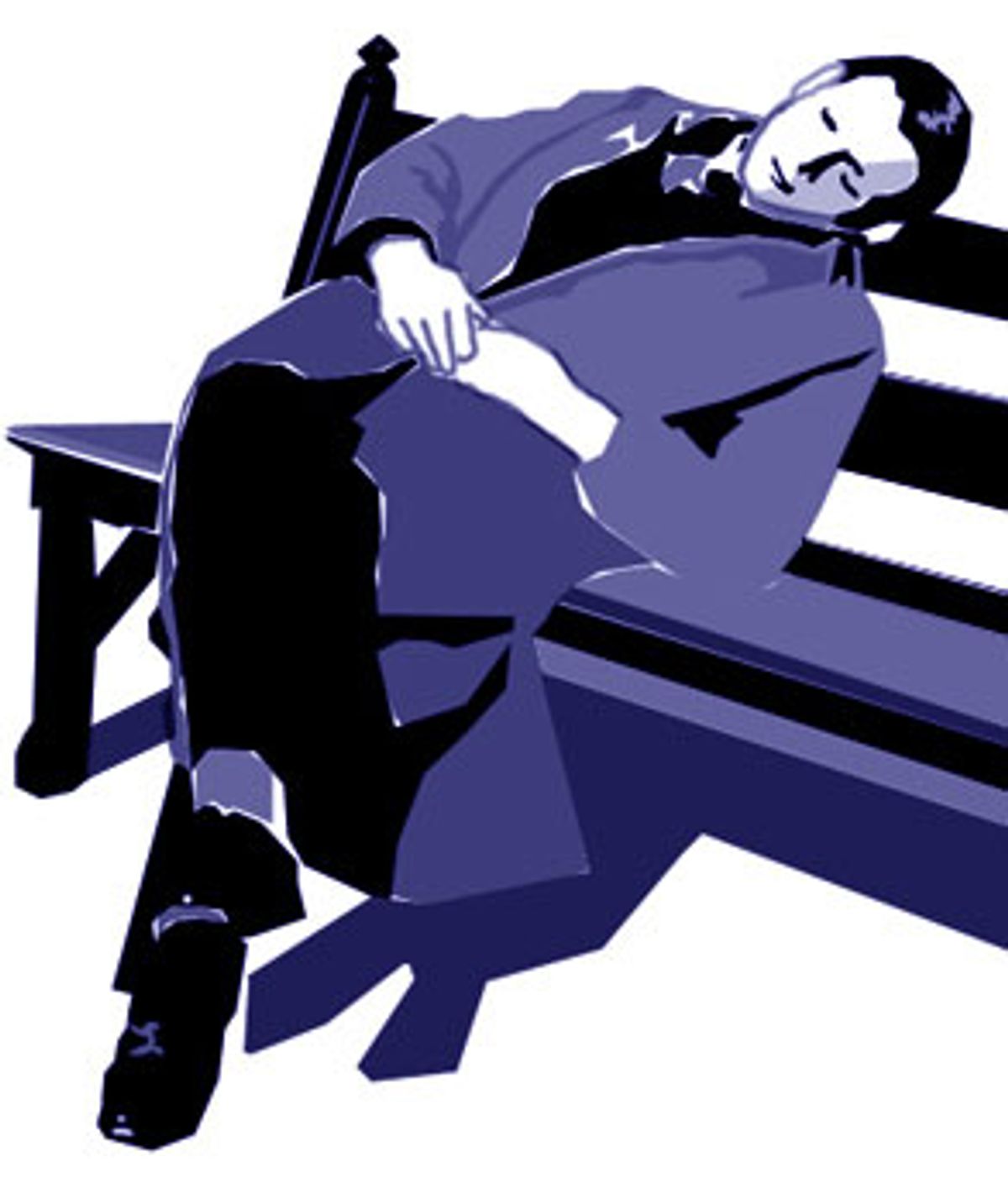 Teaching English in Spain to Madrileqos last year, I got to watch firsthand how the traditional siesta is getting phased out of most city dwellers' lives. Every afternoon I'd travel, nodding off on the rumbling Metro after eating my bocadillo con patata, to different businesses around Madrid. I had conversation classes with corporate stockbrokers, financial analysts and secretaries. Most of my classes met between 2 and 5 p.m. -- smack in the middle of siesta time.

Jorge, one of my students, quickly dispelled any myths I had about siesta as we slammed back our second round of espresso. Children take naps every day, he told me, not adults. "Usually on the weekends you have a big lunch and siesta with the family," he said. "But not during the week. No one has the time."

For centuries in Spain and Latin America, heading home for lunch and a snooze with the family was something like a national right, but with the ubiquity of global capitalism standardizing work hours, this idyllic habit is fast becoming an endangered pleasure. Ironically, all this is happening just as researchers are beginning to note the health benefits of the afternoon nap.

According to a nationwide survey, less than 25 percent of Spaniards still enjoy siestas. And like Spain, much of Latin America has adopted Americanized work schedules, too, with shortened lunchtimes and more rigid work hours. Last year the Mexican government passed a law limiting lunch breaks to one hour and requiring its employees to work their eight-hour shift between 7 a.m. and 6 p.m. Before the mandate, workers would break up the shift -- going home midday for a long break with the family and returning to work until about 9 or 10 p.m. The idea of siesta is changing in Greece, Italy and Portugal, too, as they rush to join their more "industrious" counterparts in the global market.

Most Americans I know covet sleep, but the idea of taking a nap midafternoon equates with laziness, unemployment and general sneakiness. Yet according to a National Sleep Survey poll, 65 percent of adults do not get enough sleep. Numerous scientific studies document the benefits of nap taking, including one 1997 study on the deleterious effects of sleep deprivation in the journal Internal Medicine. The researchers found that fatigue harms not only marital and social relations but worker productivity.

According to Mark Rosekind, a former NASA scientist and founder of Alterness Solutions in Cupertino, Calif., which educates businesses about the advantages of sanctioning naps, we're biologically programmed to get sleepy between 3 and 5 p.m. and 3 and 5 a.m. Our internal timekeeper -- called the circadian clock -- operates on a 24-hour rotation and every 12 hours there's a dip.

Rosekind recommends that naps be either for 40 minutes or for two hours. Forty minutes keeps you in non-REM (rapid eye movement) sleep, the physical restoration part of the cycle, and two hours lets you go into a more complete rotation of non-REM and REM. (REM sleep, in simple terms, is when our mental repair takes place and when we usually dream.) During the night REM and non-REM alternate more or less in 90-minute cycles. Napping anywhere in between cuts into the two loops, so it's better to stop the cycle before it starts -- after 40 minutes -- or let it run its course -- two hours. Latin American countries, asserts Rosekind, have had it right all along. They've been in sync with their clocks; we haven't.

Since most of the world is sleep-deprived, getting well under the recommended eight hours a night (adults get an average of 6.5 hours nightly), we usually operate on a kind of idle midday. Naps are even more useful now that most of us forfeit sleep because of insane work schedules, longer commute times and stress. In a study published last April, Brazilian medical researchers noted that blood pressure and arterial blood pressure dropped during a siesta.

Is napping always a good idea? Not according to Clete Kushida, a neurologist at the Sleep Disorders Clinic at Stanford. He emphasizes that irregular napping can indicate a sleep disorder -- from excessive daytime sleepiness (when you can't help nodding off during the day) to narcolepsy (a neurological disorder in which you uncontrollably fall asleep anywhere, any time). In the case of high-risk situations like highway driving with extreme fatigue, Kushida agrees that naps can be a good idea, but he does not recommend intermittent shut-eye in the middle of the day because it can interfere with nighttime sleep.

Sleep technician Terri Quinonez from the Stanford Sleep Disorders Clinic agrees that napping can indicate underlying disorders, but she also advocates Rosekind's theories. Naps, she says, are essentially restorative. "Think of sleep like a bank," she says, using one of her colleague's metaphors. "You have withdrawals and deposits. When you take too much out, there's a deficit. It's the same with sleep."

During his seven years at NASA, Rosekind conducted a litmus test for naps. He surveyed the effects a 40-minute snooze had on pilots and astronauts. He found there was a 34 percent improvement in performance and a 100 percent improvement in alertness. British Airways recognized the genius in this program, and sanctioned naps for pilots.

Beyond the obvious safety implications for airlines, doing something half-assed in any job costs money because you have to do it over again. U.S. companies lose about $18 billion a year because employees aren't functioning at their best, according to Sleep Foundation statistics. So while the idea of employees sleeping on the job is not attractive to most employers, instituting naptime could save them money.

While Spain is trying hard to dispel its reputation as a more relaxed European Union member, one Spanish man is trying to save the tradition of siesta, capitalist style.

Thanks to entrepreneur Frederico Busquets, people can now purchase sleep in one of his 20 Masajes a 1.000 stores. The idea came to him three years ago in Barcelona after he noticed people dozing on park benches, in cars and on the Metro. He decided to help out his fellow Spaniards by offering victims of cropped lunch breaks a McDonald's-style version of the siesta: a five-minute massage and a half-hour nap for 1,000 pesetas (about $5.50).

Acknowledging that siesta is no longer a time for family bonding, Busquets has redefined the siesta in accordance with corporate needs. Masajes a 1.000 customers span the workforce: lawyers, bankers, doctors, hairdressers and restaurant employees. Reclining in an ergonomic chair in a semidark room, listening to ambient music, these once-closeted nappers make siestas fit into their busy lives.

The company is expanding quickly, with two new stores opening in Madrid and one in Seville this year. It's also planning to open stores in Venezuela.

Could something like Masajes a 1.000 arrive soon at a minimall near you? It seems unlikely. Even while sleep researchers ratchet up the gruesome toll that our negligent dozing habits are taking on our citizenry, there are no signs that Americans are slackening their work hours. According to economist John Schmitt, coauthor of "The State of Working America 1998-1999" from the Economic Policy Institute in Washington, middle-income families spent 246 more hours per year at work in 1998 than in 1989.