The taste of a woman

Men aren't the only ones who can make themselves sweet for their lovers. 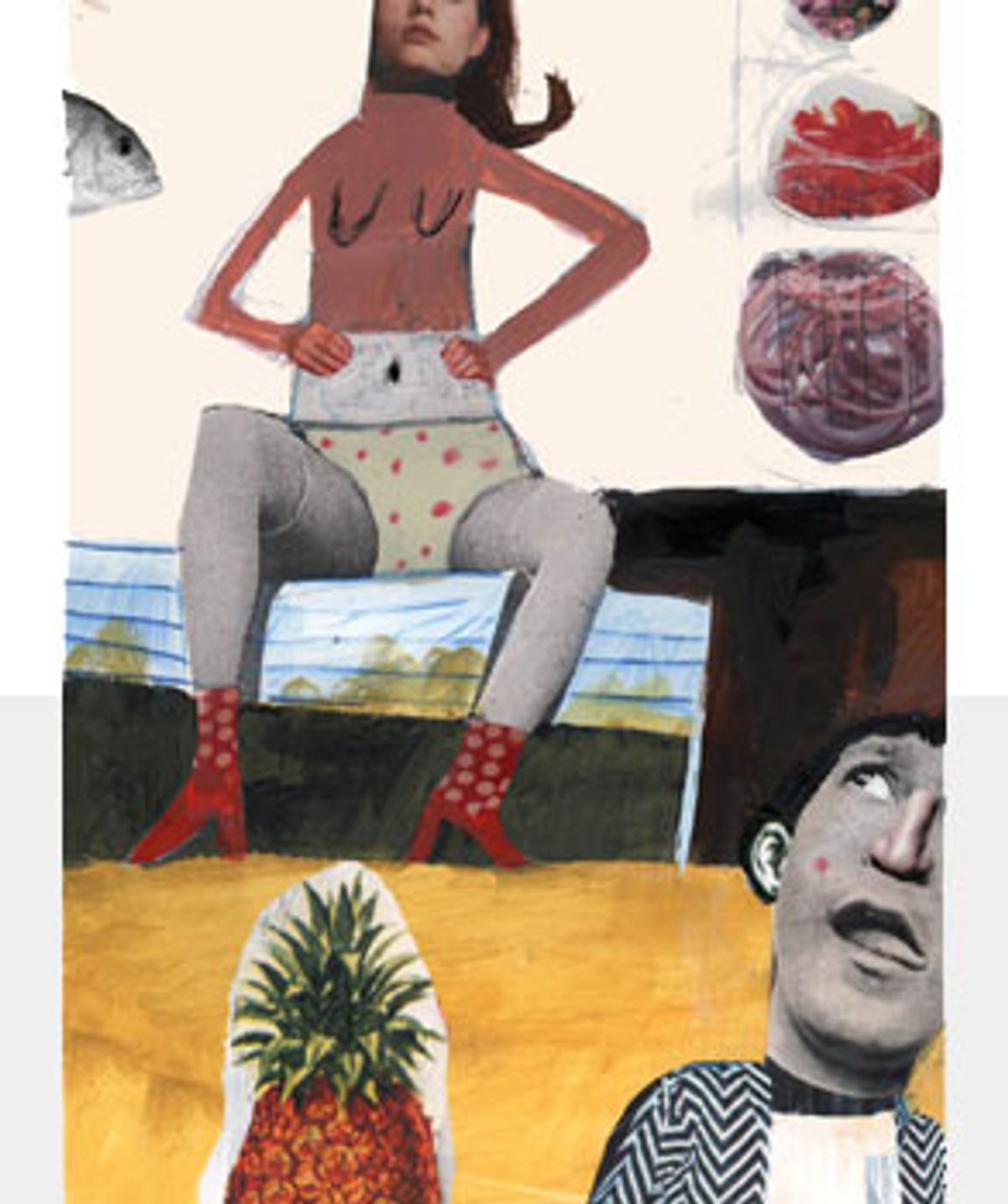 Most ladies -- myself included -- have grimaced and spit out some sperm on occasion. But what about your own taste? Have you ever stopped someone from going down on you for fear of what their reaction might be? What if something's fishy?

Unless you've got bacterial vaginosis it probably isn't. But if you still feel like your pussy isn't as sweet as it could be, how can you make your lover crave eating it? And what do most women taste like?

"I've heard a lot of descriptions -- chicken, fish, etc. That's all bullshit. If you wanna know what it tastes like, stick your tongue in the small of your underarm after a mild workout. That's the smell and the taste! The moistness, the sickly sweetness of sweat, the mild metallic taste, even the way it looks when it's unshaved --it's just like pussy," says Jelly, a sex and pop culture writer for the magazine While You Were Sleeping.

Although I didn't do the armpit test, I once dated a guy who had a big lesbian fantasy and got turned on when I licked his armpit while we were having sex. It somehow helped his fantasy of me eating pussy. Luckily he showered frequently so he wasn't too sweaty, but I still wouldn't want my pussy tasting like that. Then again, maybe that was him and I tasted like blueberries.

Determined to investigate I stuck my finger between my legs to see what I tasted like, only to find that I didn't really taste like anything except for an indescribable blandness. Boring! So I decided to expand my scientific inquiry. I asked some of my friends (guys and girls) what good pussy tastes like and I got an array of answers: sweet, sour, bittery, lemony, buttery, salty but not too salty and tangy. They all basically said that individual women taste different and women taste different on different days.

According to author and well-known cultural sexologist Dr. Carol Queen, this is due to a woman's unique hormone balance and body chemistry.

But you can't discount good old hygiene. If a woman has bathed and wiped carefully before engaging in oral sex then chances are she's going to have a cleaner smell. Although you have to be sure to get rid of the soap residue -- unless you want to be known as the Ivory Girl. But don't douche. Because commercial douches are full of chemicals and can cause an imbalance in a woman's natural system, you may end up with an overgrowth of what's already there, meaning your taste and smell will just get worse.

As John at San Francisco Sex Information (SFSI) told me, "You should make sure under the clitoral hood is clean and that your entire pussy is basically clean so you have a fresh base to start with."

Sex writer and self-proclaimed pussy connoisseur "Jay Jones" (whose current paramour is only letting him give good quote under an assumed name) says, "Sure, some women taste fishy but that's not so bad. Some women don't wipe themselves well either, and the resulting urine and/or poo taste is nasty. And yeast infections are skanky. But really, if I like someone, I am willing to put up with all that, plus gobs of menstrual blood."

Yeast? Menstrual blood? These are just some of the other factors that make the taste of vaginal fluid different than the taste of semen: periods, hormones, medical conditions, contraception methods and age can all affect the taste of pussy. I've been told that on days surrounding my period I taste "rusty" and a search on the Internet for "menstrual taste" led me to edifying descriptions such as a "tangy battery taste" or "metallic," posted by Skip, the Semen King, on StayFree.com.

According to Queen, "aging affects the consistency and availability of vaginal lubrications, between puberty and menopause women have more secretions. And the more stress a woman has, the more pungent she may become."

Queen had some other handy tips to make a tasty pussy: Since smell and taste are so closely related, a woman who shaves or trims her pubic hair may have less of a scent than a woman with a dank bush -- giving the illusion that she has less of a taste.

But it's the contraception methods that "Jay" gives a big thumbs-down to. "What I can't stand is spermicides -- they taste poisonous and wipe out all other flavors. If you're eating out a woman who's lathered with spermicide, the stuff numbs your lips, mouth and tongue. It's like slurping paint thinner. If women want to be licked before intercourse and they're using a diaphragm with spermicide -- try to get the goo in far enough so that men don't have to swallow it."

When it comes to nutrition, a lot of the same tips that go for guys go for girls as well. Of course there is no scientific research, so, following the lead of my self-proclaimed foul-tasting comrade, Salon sex contributor Hank Hyena, I decided to do my own research and see if chicks get the same tips when it comes to creating some finger-licking snatch.

Hank bemoaned not being able to eat his beloved asparagus, but there may be hope for woman and mankind. Sexologist Dr. Robert Morgan Lawrence told me that the asparagus rumor was a myth! "Asparagus affects urine and is excreted directly through the kidneys." He did, however, agree that garlic and onions create a more bitter taste while pineapple makes pussy sweeter.

A popular tidbit of advice was the elimination diet. As Deb Levine, sex advice columnist on Thrive.com and author of "The Joy of Cybersex," says, "You should experiment with your diet and with your lover by using an elimination diet or a rotation diet. Eliminate dairy products, cruciferous vegetables -- cauliflower, broccoli, asparagus -- which are also gas producing vegetables, and garlic and onions. The biggest rumor is that eating parsley before oral sex makes the pussy sweeter."

The experts agree, for the best tasting pussy, vegetarians come out ahead. John from SFSI told me that "a vegetarian diet with no saturated fats is the winner. Meats, alcohol, tobacco and drug use all make a pussy taste bitter or acidic. Pineapple and fruits make it sweeter and give it a fresher, zesty flavor. Chocolate and fats make it less fresh." So while chocolate may help your PMS, it's not helping the taste of your juices. But at least it's a good substitute for love.

Enough of the guys; it was time to hear from one of the most pussy-lovin' lesbians I know: Jackie Strano, lead singer of the Hail Marys. Jackie was eager to share her tongue-tasting tests. "My favorite pussy is one that is neatly trimmed and clean, as in it gets some hot water rinsed through it at least once a day, and one that likes a lot of attention. Pussy tastes like hot-sweet-sticky-kinda-salty candy. A woman's natural juices mixed with the smell and taste of her skin is a beautiful thing. Chicks with bad diets who do too many drugs don't taste good."

Drugs, tobacco and alcohol all came up as winners for making bitter, "not fresh" tasting hole. And out of all the drugs, speed ranks No. 1 for producing absolutely the foulest-tasting pussy ever sampled, according to my interviewees. And speed freaks often tend to forget normal, everyday things, like drinking nonalcoholic beverages, which can be harsh on the system. "The more water you drink the more output you have, which thins the fluids and thins the flavor," says Lawrence.

This coincides perfectly with what most people I asked told me. Surprisingly, most of them are happy just to be allowed down there. Says "Jay," "If I like the woman I'm licking I'll generally feel happy, privileged and lucky to be between her legs -- and it will taste delicious."

So, gals, all we need is good hygiene, a vegetarian diet, lots of pineapple, no bad habits and we're sweet as candy! It sounds simple on paper, but if you're like me and love beer, steak and cigarettes, then having the tastiest pussy in the world might not be an option. But, guys, unless you're ready to change your lifestyles as well, I suggest we all be a little understanding. So stop with the fish jokes, OK?

Emily Torres is a writer in San Francisco.