"When We Were Orphans" by Kazuo Ishiguro

In the new novel by the bestselling author of "Remains of the Day," an Englishman raised in Shanghai returns to find the dark truth about the deaths of his parents. 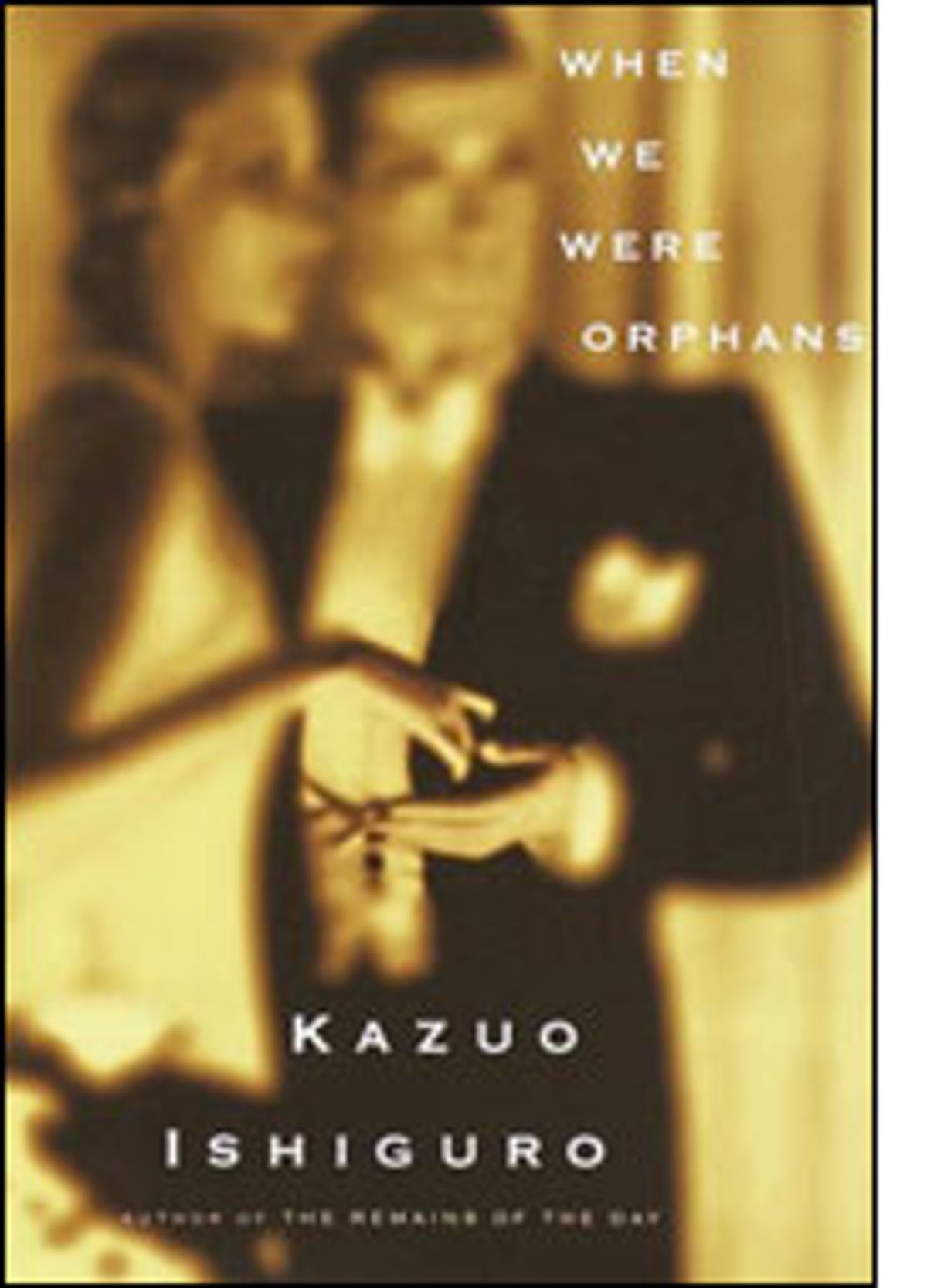 Kazuo Ishiguro is an artist of inference, of that which need not be said. His most powerful tool as a novelist is a studied, tempered English prose style so pitch-perfect that only an auslander could manage to carry it off these days. You can set your watch by the cadence, and the use of commas, in passages such as this one, from "When We Were Orphans":

Yesterday, by the time young Jennifer returned from her shopping trip with Miss Givens, the light in my study was already murky. This tall, narrow house, bought with my inheritance following my aunt's death, overlooks a square which, while moderately prestigious, catches less sun than any of its neighbours.

But Ishiguro's latest novel isn't as good as his 1989 masterwork, "Remains of the Day." In that book, he used the slenderest filament of a plot (the consummate butler takes a solitary drive through the local provinces) to create a gorgeously nuanced monologue on prewar English society. It was a masterpiece of tone and understatement, an heirloom novel -- a living example of a literary strain that fell out of fashion a half-century ago, to be replaced by hardier, often less flavorful varieties. And more subtly, as a novel of manners by a Japanese-born writer, it was an exploration of those places where the Japanese and the English psyches intersect: the comforts and the tyranny of station; the refuge of historical memory vs. the reality of the encroaching present; that guarded borderland between thought and speech that the civilized soul inhabits, trapped and stultified but recused from the smaller forms of human despair.

Plot, characters and dialogue, however, tend to get buried under Ishiguro's monolithic command of the language. When you don't notice they're missing, as in the barely scaffolded "Remains of the Day," it's genius. But in "When We Were Orphans" when Ishiguro allows his style to recede so that the story can take over, it sometimes feels like the Creamsicle has fallen off and you're left holding the stick.

The narrator, Christopher Banks, was raised in colonial Shanghai, but was shipped back to England while still a child to live with an aunt, after his father, and then his mother, vanished. The story begins with Banks' reminiscences of the year he came down from Cambridge and entered London society. It's 1923, and Banks has always secretly planned to become a detective, in order to solve the case of his parents' disappearance. We follow him, flashing back often to his childhood in the East, as he charts a brilliant career that unfolds just out of view. He mentions having solved celebrated cases, and describes his rising fame -- until, with years elapsed and his reputation established, he begins to bend his narrative arc back to Shanghai, where the unsolved case of his life awaits him. Minor characters pop in and out of the story, dropping portentous hints that there's a great evil at play upon the world, with Shanghai as its nexus -- and that it's Banks' duty to return there not only to regain his family but to save all of civilization.

Banks' home city awaits him as its returning champion. The owner of his boyhood house offers to vacate his family and return it to him. "Of course," the owner remarks, "it is quite natural. You will wish to restore this house to just the way it was when you were a boy. That is quite natural. My good sir, I understand it perfectly." There's also a girl -- the mysterious and formidable Sarah Hemmings, whose life has been playing bumper cars with Banks' all along, and who seems to be in it all up to her neck.

There's more than a touch of Kafka in "When We Were Orphans," of the sort that critics detected in Ishiguro's previous novel, "The Unconsoled." Here, things just keep getting queerer as the story goes on, until you start to wonder whether the world contained in the book is more fanciful than it seems, or whether it's going to be revealed at some juncture that Banks is actually writing his memoirs from the day-room of some sort of mental institution. With Kafka, you generally know where things stand in that regard: Everybody's crazy, and the whole world is the mental institution. But with "When We Were Orphans," it goes a little bit one way, then a little bit the other way, with a regularity that suggests Ishiguro is doing it on purpose, just to get you good and dizzy.

The frisson builds and gradually becomes unbearable -- and finally, in Shanghai, the clues to the case are mounting up, a rendezvous with Sarah is imminent and Banks and his world seem to be barreling toward each other on a collision course. And then the book regains its senses, drifting back, as though startled by its own forthrightness, into the style of an heirloom-English novel. The case gets pieced together. Bit of a tussle there, old chap. Rather a strange atmosphere. Portentous. Kidnapping -- dreadful business. But everything came out in the end, wot? Must look Miss Hemmings up sometime.

There is a mental hospital involved, but Banks drifts through it without a sign that there's anything uncanny about his presence there. The "great evil" that haunted civilization pretty much goes away -- or, rather, shifts from the abstract and unspeakable into the concrete evil of the Second World War. The culprit in the kidnapping -- well, it would've been great if the butler did it. Stevens, that is -- from "Remains of the Day" -- motoring through China in his employer's antique Ford, undergoing his eternal, oblique identity crisis with a parcel of struggling bodies in the trunk. As it is, "When We Were Orphans" is less than a proper mystery because you couldn't have figured it out ahead of time, and it doesn't end with enough of a Kafkaesque, mythopoetic wallop to make the surprise worth wringing your hands over. The reason to read the book is Ishiguro's gorgeous, perhaps matchless, prose. And that's more than enough until (maybe with his next novel) Ishiguro manages to build a fictional vessel that can contain his formidable command of both the architectonic and the surreal.