It only lasted for a fraction of a second, but it illuminated what it means to be a champion. 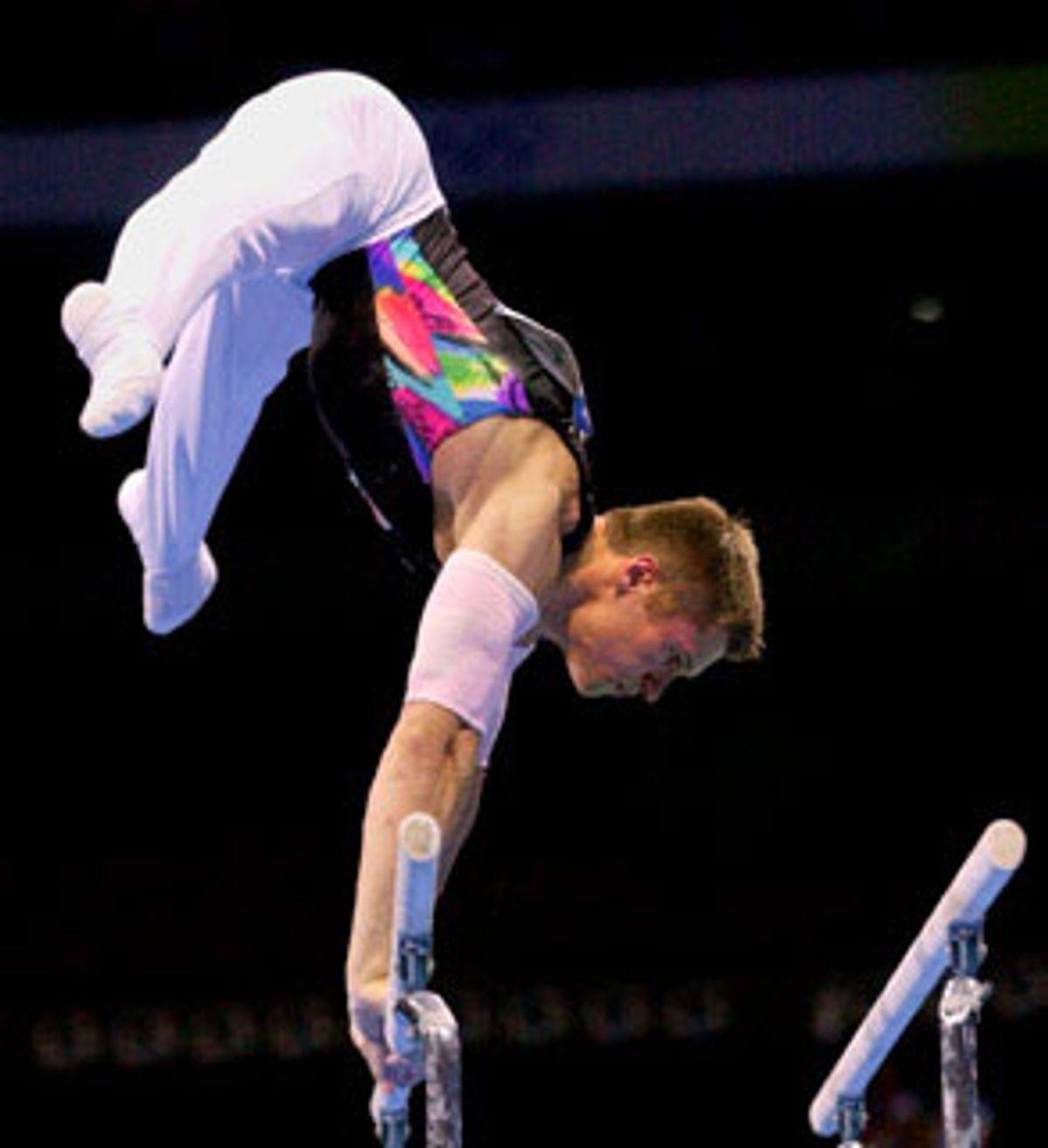 The title of world's greatest athlete is usually reserved for decathletes, those superbly versatile competitors who must perform at close to world-class level in 10 events, from distance running to high jumping to sprinting to javelin throwing. But you could make a good argument that the greatest athletes in the world are gymnasts.

They also have to master many different skills -- but those skills, unlike most of those in the decathlon, are utterly unnatural. If you have good running genes, you can be a competitive runner just by doing what comes naturally. But to be a competitive gymnast you have to defeat every instinct in your body: You have to turn yourself into a machine capable of defying momentum and suspending gravity.

Like ballet, the physical activity it most closely resembles, gymnastics is irresistible because of its spectacular perversity: It is so obviously not what our bodies were designed to do. Its beauty is Promethean: Every single moment of it is ferocious. It recalls Michelangelo's Slave statues, in which the bodies seem to be wrestling themselves into existence out of the rock. To watch it is to see pure will extended in space.

I thought about this on Wednesday night as I stared through my binoculars at the great Russian gymnast Alexei Nemov as he performed his final routine on the parallel bars in the men's individual all-around final -- the competition that determines who is the greatest male gymnast in the world. Nemov held the lead, but it wasn't that big. If he choked, fell off the bars like his Russian teammate Svetlana Khorkina had done the night before, he could lose not only the gold medal but a chance to medal at all.

A wizened veteran at age 24, he had experienced the agony of losing the gold in Atlanta because of a mental lapse: In his final event, the floor exercise, he forgot to add a twist to his tumbling. He needed a 9.75 to stay ahead of his rival for the gold; because of his oversight, he only received a 9.7. Now, four years later, after leading from the very first apparatus, he was in the same situation.

Other athletes were doing their routines in the background, but everyone in the big crowd was watching Nemov. He stood for a long time in front of the entrance to the competition area, unmoving, head slightly bowed, alone with his thoughts. Finally he slowly approached the bar, rubbing his hands delicately along it, like a violinist feeling his instrument's neck, then gripping it the way you'd test a handhold on a cliff with a 4,000-foot vertical drop. He went over to the talcum bowl and carefully dusted his hands, then gripped the bar again. He still wasn't satisfied. Finally he raised his arm and began his routine.

The parallel bars should be called the Procrustean bars. Like all gymnastics apparatus, from the crucifying rings to the ungainly pommel horse, they're a torture instrument, brutally unforgiving. You launch yourself impossibly high, flip gloriously but blindly in the air and fall between them, knowing exactly where they are the way you know where your belly button is, break your fall with your straining arms and launch yourself again. It is beautiful to watch, but the least deviation, the smallest error, a bad grip, a moment in which your muscles misfire, and suddenly the world is no longer a realm of effortless magic and grace, a floating world you soar through like a god. It is a world where objects exist and gravity exists, and they hit you and break you.

Nemov's face was upside down as he swung into his routine, the superb, massive musculature of his back and arms rippling. His face was contorted with effort. I only saw it for an instant, but the expression pierced me. It was, no doubt, the same grimace he always wore when competing, the savage mask of concentration and tremendous exertion. But this was the last routine, with four years' work on the line, and this was the face of a great champion, who was willing himself not to lose, who would not lose. And it fixed in my mind, like a negative, even after he swung up and his face could no longer be seen.

It stayed with me, that straining, upside-down face. And after the competition was finished and Nemov was standing on the gold-colored pedestal, beaming like Christmas, with something they could never take away from him hanging around his neck, I could still see it -- the face of struggle, the face of courage, the face of victory.