While the contenders, including flamboyant Russian superstar Svetlana Khorkina, lose their nerve, an icy-veined pixie from Romania and her two teammates walk off with the prizes. 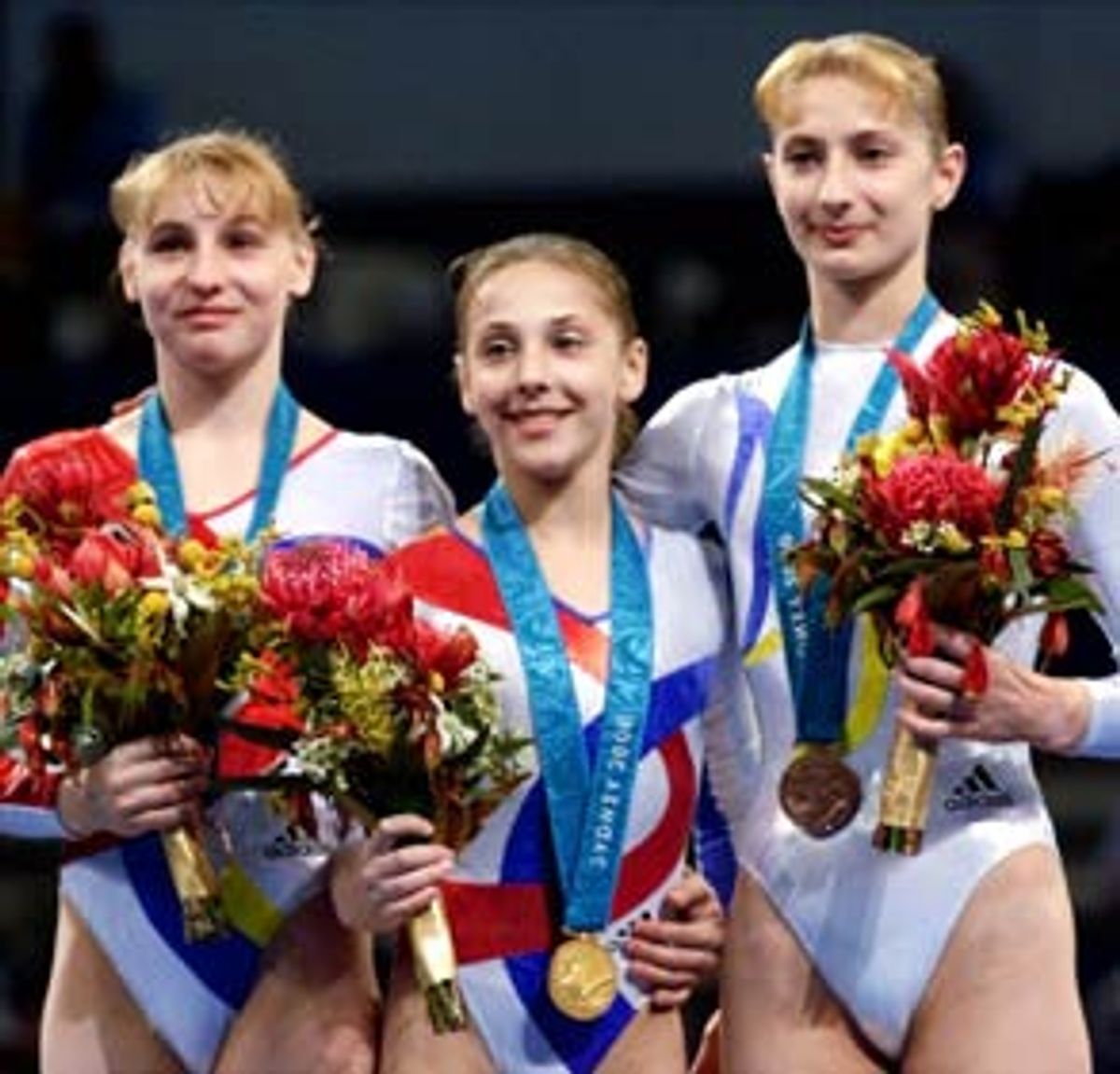 It wasn't so much a gymnastics championship as a game of "Survivor." One after the other, flashy contenders for the title of World's Greatest Female Gymnast stepped up to center stage with a chance to lock up the gold -- and one by one they were voted off the island. Meanwhile, there were these three Romanians, one of whom appeared to be about 10 years old, who just kept hanging around, hanging around, putting up solid scores, lurking innocuously in fifth and sixth place. And then when it was their turn to perform, they delivered -- and hit the jackpot, touching off the biggest party in Bucharest since the fall of Ceausescu.

The big drama going in revolved around the imperious Russian diva Svetlana Khorkina, who suffered /feature/2000/09/20/olympics_update/>a meltdown of unthinkable proportions in the team competition, falling off the uneven bars and taking her team down with her. Could she bounce back from that debacle in this most nerve-wracking of sports? And if she won, what outlandish, self-promoting stunt would she pull? You just know that NBC, whose tape-delayed strategy has been rewarded with ratings in the neighborhood of a "Hogan's Heroes" rerun, was hoping that the blond glamour-puss would take the gold, allowing them to spark some male interest and pull in the vast, hitherto untapped ogling-chicks-in-leotards demographic.

That fond hope looked like it might come true after the first rotation. (A "rotation" is finished when each of the four groups of gymnasts -- there are nine gymnasts in each group -- completes its performance on one of the four apparatuses: vault, uneven bars, balance beam and floor exercise. There are thus four rotations.) Khorkina started on the floor, where she is a master at working the judges. Wearing a black sequined outfit that showed off her seemingly endless legs, she carried it off with panache. To my untutored eyes, her acrobatics didn't seem that amazing, but she knows how to dance and finish a line dramatically, which sets her apart from almost all of the other competitors. (It almost seems unfair to allow someone who has actually had sex to perform on the floor against those tiny little rubber-ball girls.) The judges rewarded her with one of the highest marks of the evening, a 9.812. After the first rotation, she was in the lead. The Romanian trio cruised along in the 9.6-to-9.7 range.

The wheels began to come off La Khorkina in her second event, the vault. This is by far her weakest event -- I guess being taller than 4-10 really hurts when you're trying to rotate through the air in a short time and space -- and it showed. On her first jump, she landed disastrously on her knees. She pulled it together on the second one, but her score was a feeble 9.343 and she fell to 10th. Meanwhile, a dynamic, muscular little Russian named Elena Zamolodchikova, who was third in the World Championships last year, followed her strong uneven routine with an equally strong balance beam. She held the lead after two rotations, with Ukrainian powerhouse Viktoria Karpenko (who almost won the World Championships last year) in second, and impressive Chinese performer Yuan Liu in third. The Romanians Maria Olaru (whose routines were technically accomplished but a little bland), Andreea Raducan (a tiny, explosive, ridiculously cute waif in the long, ridiculously cute waif gymnastics tradition) and veteran star Simona Amanar were fourth, fifth and something like seventh.

Those who have never seen a gymnastics event live -- a group that until four days ago included me -- may not realize what a weird, chaotic, amazing spectacle it is. On TV, you see only one performer at a time, and they filter out all but the contenders (and, of course, the Americans). You're vaguely aware that other stuff is going on because you hear applause at inappropriate times, but you don't realize what a wild circus of virtuoso physical feats it is. All of the routines take place at more or less the same time, so that while one performer is preparing to start her uneven-bars routine, another one is barreling down the approach to the vault, a third is in the middle of her floor routine and a fourth is falling off the balance beam.

This can be confusing, to put it mildly. The trick is to know who the favorites are, make a note of what order they're performing in their nine-women group and remember to watch them. Judging from the viewing patterns of the audience members around me, most of whom were even more ignorant of the finer points of gymnastics than me, it might be a good idea if this was explained more clearly. As it was, when some pivotal, medal-deciding routine was happening on, say, the unevens, half the audience would be ooh-ing and aah-ing over a floor routine by a French girl in 29th place. But so what? Many if not most of them were there as much to enjoy the spectacle as to try to figure out who might win.

The third rotation began. The colorless, tasteless, odorless Olaru did two solid vaults and jumped ahead of Liu. It was still anybody's championship: Khorkina was .27 out of first, a long way, but if she nailed her signature event, the uneven bars, and scored in the high .8s, she could put pressure on the leaders. She swung up, began the transfer from one to the other -- and suddenly, shockingly, was on the ground again, just like she'd been two nights earlier. She got back on and hurried through her routine, but her night was over. The 9.012 just made it official. She would never, ever be Olympic all-around champion.

Khorkina walked off the platform and over toward the wall. She didn't say anything and no one spoke to her. Wearily, she sat down. A swarm of cameras, drawn to the spectacle of "human interest" (read: misery and humiliation) just as I was with my binoculars, descended upon her in a clump. One guy with a big TV camera just planted himself in front of her, recording the juicy tidbits of her total wreckage. On and on he stood there filming from four feet away as she sat silently. The irony of the scene suddenly struck me: This was a woman who lived by the camera, who loved its intrusive eye, who had removed her clothes for it. Now it had turned on her and there was nothing she could do. Suddenly she no longer looked like La Khorkina, mistress of all she surveyed. She was just a crushed 21-year-old kid in floppy yellow slippers whose Olympic dream had ended. She just sat there. Finally, the camera guy left.

Meanwhile, the Ukrainian Karpenko, whom many had picked to win the gold, was ready for the excruciating balance beam. Of all the athletic events I know, the balance beam is the most mind-boggling. How can you do a backwards flip and end up standing on something only a little wider than your foot? How do you even start practicing something like that? What drugs do they give you? But it didn't faze Karpenko, who nailed her beam routine for a 9.775. Nor did it faze the mighty mite Raducan, who leaped about on the beam as fearlessly as a macho bridge-worker and got a 9.787. They were nipping at Zamolodchikova's heels. Then came the biggest roar of the evening, when Australian Lisa Skinner performed a strong floor routine and was rewarded with a 9.750. Incredibly, the darkest of dark horses actually held third! The place was rocking, but not for too long -- everybody suspected it couldn't last.

Amanar, for my money the most mature and interesting performer of the three Romanians, then turned in a fabulous floor performance, with great athletic tumbling, and racked up a 9.812. She was going to be near the leaders, but how near wouldn't be clear until Zamolodchikova did her floor routine. Zamolodchikova, the third-ranked female gymnast in the world, was the leader after two events and one of the most athletic of all the competitors, and this event was fairly safe. She might even be able to pad her lead going into the final rotation.

The Russian started out strong, but then something went terribly and inexplicably wrong. Who knows why? Maybe the bump-and-grind stripper music she chose offended the puritanical pre-pubescent gods who ordain the destinies of female gymnasts. Maybe Russia's gymnastics team is just under a curse. But whatever it was, in a seemingly innocuous transition in her program near the corner, she suddenly lost her balance and actually sat down on the mat. She bounced back, but the damage was irrevocable: 9.112. She went down in the standings as fast as a shot of vodka down Boris Yeltsin's throat. Off the island!

That left Karpenko at the top of the hill going into the final rotation at 29.149, with Raducan a close second at 29.068, the improbable Skinner third at 29.025, Amanar fourth at 28.986 and Olaru fifth at 28.981. It was Karpenko's match to lose, and once again the setting would be the friendly confines of the floor. The Ukrainian began her routine, completed a nice tumbling pass -- and suddenly and shockingly took a huge, ungainly step out of bounds. The judges punished her even worse than Zamolodchikova: 8.725. Off the island!

As always, Olaru and Amanar completed their routines without any major errors. As expected, Skinner, the plucky Aussie, slipped out of contention. That left it up to Raducan.

The little brunette with the big brown eyes and the endearing demeanor was going to perform on the floor -- an event, as good chance would have it, in which she happens to be world champion. But Zamolodchikova and Karpenko were no slouches on the floor either. I did a quick calculation: She needed a 9.575 to win. Raducan launched herself into her routine -- and after a few seconds, you might as well have given her the gold medal. She was confident, fearless, jaunty, flinging her superbly trained little body into the air like a hat in the air, sticking every landing. When she finished, she smiled ecstatically. She knew. The crowd knew, too, and it cheered the new champion. When she came off, her coach grabbed her and embraced her, then held her aloft.

The big story, aside from the poise of the talented Romanians, is: What the hell happened to the Russians? You just know that right now, in some dingy apartment in Moscow, some disgruntled guys are saying "This would never have happened under the command economy."

This pretty much concludes the gymnastics portion of our broadcast, although I think I have one more ticket to some non-competitive gala thing. It's been fantastic -- and not just the athleticism, which is simply stunning. It's hard to remember, sitting up in the stands and watching these poised athletes doing incredible things, that a lot of them -- maybe most of them -- are not much more than little girls. They're not that far beyond the age when they have stuffed animals and special blankees. Maybe some of them still do. And these child-women manage to keep their heads up and do their best -- and that best is soaringly, heart-tinglingly good -- on the biggest stage in the world. In my book, they're all champions.