License to be good

In the free-software world, people obey the rules because they believe in them. In the music industry, the rip-off is a way of life. 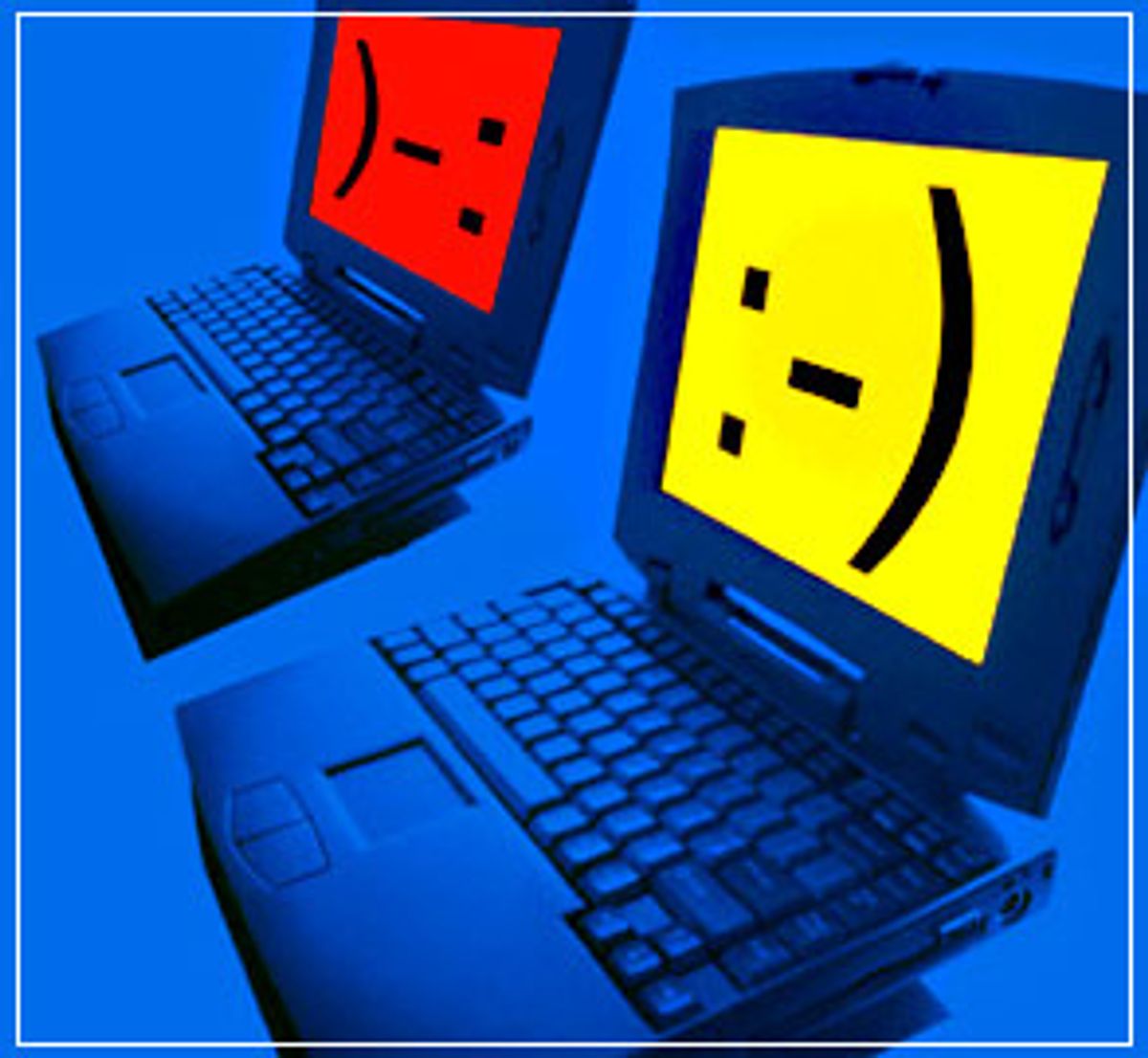 About halfway through Donald K. Rosenberg's new book on open-source software, "Open Source: The Unauthorized White Papers," I hit the chapters on licensing. I brewed another pot of coffee and made sure I had a pile of large needles close by to stab myself with. Learning about licensing is a dirty, dangerous job -- but if you care about free software, you really need to read the fine print.

Never mind the endless, mind-numbing subtleties. You don't really want or need to know that the Sun Community Source License treats derivative rights (the right to make new software programs based on the original source code) differently than the Mozilla Public License. You don't have to care that there are actually two versions of Richard Stallman's famous GPL -- the strict, original version untrammeled by compromise, and the more industry-friendly LGPL. Once you've had the basic parameters explained -- on this side, the side of ideological purity, there is the GPL, and on that side, the side of lenient pragmatism, there are the BSD-style licenses -- you know more than enough to stay, in the words of hacker Eric Raymond, "fat, dumb, and happy."

But the longer I puzzled over the various licenses described by Rosenberg, and the longer I mulled over a brilliant essay on the potential legal enforceability of such licenses by Steve Lee, the more I began to be amazed at the deep structural weirdness that clings to the world of open-source licensing. Open-source licenses are the practical foundation of the open-source infrastructure -- and yet at the same time they are almost abstractly irrelevant. For all their carefully crafted clauses, all their painstaking attempts (particularly in the cases of the licenses concocted by commercial companies) to balance various interests, and all the endless digital hot air that has been expended in holier-than-thou license flame wars, not a single one of these licenses has yet been tested in court. No one knows if they will actually work.

We know the software works. But do the licenses really ensure survival in an ever more litigious age? We have no idea. And yet free software is thriving. How is that? One answer is that it's not the legal standing of licenses that makes people respect them -- it's the consensus that the rules the licenses codify are essentially fair.

That's the lesson that the entertainment industry needs to have drummed into its collective behind. It's well established that nobody trusts record companies. So despite the hundreds of millions of dollars spent trying to prop up copyright through legislation, lobbying and lawsuits, nothing seems to work.

The record companies need to take a different approach. They must create a system that people will believe in. Force won't work -- in the digital age, it can't work. And while a good license that's part of a fair system can't enforce ethical behavior, it can, in significant ways, encourage it.

I once asked Bill Joy, co-founder of Sun Microsystems, whether his opinion on the merits of licensing had changed because of Sun's experience with Microsoft and Java. Sun has historically been a proponent of aggressively licensing its hardware and software to other companies. But Microsoft licensed Java from Sun, and then promptly proceeded to write its own version of the programming language that was incompatible with Sun's. Did that sour Sun on the merits of licensing?

No, said Joy. "They [Microsoft] were going to do whatever they wanted. It's quite clear that the law doesn't matter much to them -- what difference does it make if we license it to them or not? They would have done what they wanted anyway."

Sun's experience is just another example of how licenses are only as good as the faith that people put into them. And yet, more virtual blood has been shed on the topic of licenses in the free-software community than on practically any other subject. Nothing is surer to enrage hackers than a corporate license that appears designed to take advantage of developer volunteerism. And just let the merest whiff of the accusation surface in a place like Slashdot that some tiny software company has violated the terms of the GPL. The troops mobilize! The e-mail bombings begin! The press, attracted by the hubbub, generates its own frenzy. And invariably, the offending company scrambles to cover its butt -- no one needs that kind of bad publicity.

Contrast this, again, with the music business. Open-source software authors intend for their intellectual property to be freely redistributed, whereas songwriters generally do not. (Although with Offspring and Smashing Pumpkins giving away their albums, there are some clear cracks in the dike.) But despite this seemingly huge ethical issue, we end up with two completely different outcomes. In the case where the authors are giving away their software but putting certain conditions on what people are allowed to do with that software, the community of software developers is respecting the letter of the license. Whereas in the case where the songwriter and the record company are screaming, vociferously, that people should stop doing what they are doing with their songs, the intent of the author is being trampled.

The explanation for the different outcomes, again, is that software developers believe both in the right of software authors to determine what happens to their code and in the essential fairness of the open-source system. The point of open-source licenses is to benefit the user or the software developer, not to exploit them. But record companies don't inspire the same trust. Consumers feel ripped off when they pay $16 for a CD whose cost to produce is minimal. Artists, even if they are opposed to Napster music trading, still feel exploited by record companies. The system is based on each participant trying to get away with as much as they can -- so that's the way consumers behave, too.

Open-source software and Napster-style copyright violation are, though different in some important ways, still both sides of the same coin: They are both reflections of the fact that in the digital age, it is absurdly easy to copy things. Open-source software hackers have made that fact into the foundation of the way they do business. The music industry sees it as a threat to all that they hold dear.

But it's also an opportunity. If the recording industry could come up with a system that people believed in, they could potentially save themselves, at the very least, the millions that they are spending on legal fees. But to pull that off, the record companies are going to have to hope that if they treat consumers and artists fairly, people will act fairly to them.

That's a radical thought -- since in some ways, being fair is patently anti-capitalist. It means not charging what the market will bear, not exploiting either consumers or artists, dividing up the pie more equally than ever before, and then depending on average people not to abuse the system. It's also a very risky business, because there is no guarantee that people will behave honorably.

But it's the only way forward. There will always be a workaround to circumvent any security measures the record companies devise, and there will always be a new improved file sharing protocol to replace whatever the lawyers manage to shut down. Underground online black markets will never disappear; ones and zeroes are just too damn good at getting around.

Would it work to modify the current system of copyright so that consumers of music would be free to trade the music, if in return they committed to voluntarily compensating artists when they benefited from such trading? Impossible to say. The current experiments, such as FairTunes, are too small in scale, and lack enough support from the big players, to make a dent in the public consciousness. But the open-source example suggests that, even if the licenses themselves aren't enforceable, the language of those licenses may encourage "good" behavior.

Steve Lee chooses the Apache license as an example. The Apache Web server is the most widely used program on the Internet for enabling computers to host Web sites. The license that protects its use is a spinoff from the lenient BSD-style family -- an open-source license that says that you can do whatever you want with the code, even make changes to it and keep those changes proprietarily to yourself, as long as you give credit to the original authors of the code.

But, as Lee notes, there are some significant additions to the Apache license that emphasize Apache's dependence on volunteer contributions and implicitly make the case for Apache's righteousness. For example, use of the Apache name is forbidden for any derivative software product in which code is kept proprietary.

Incentives to join the gift economy! If the music industry could figure out how to join in -- or if at the very least it made an honest attempt to join in -- wouldn't everyone stand to benefit? Perhaps profit margins at the biggest record companies would be tightened, but that's just life in the 21st century. It's time to give people licenses that encourage them to be good, rather than invite them to not give a damn.