The engrossing, gem-hard little popcorn-cruncher is as good as any well-executed cop show. And what's wrong with that? 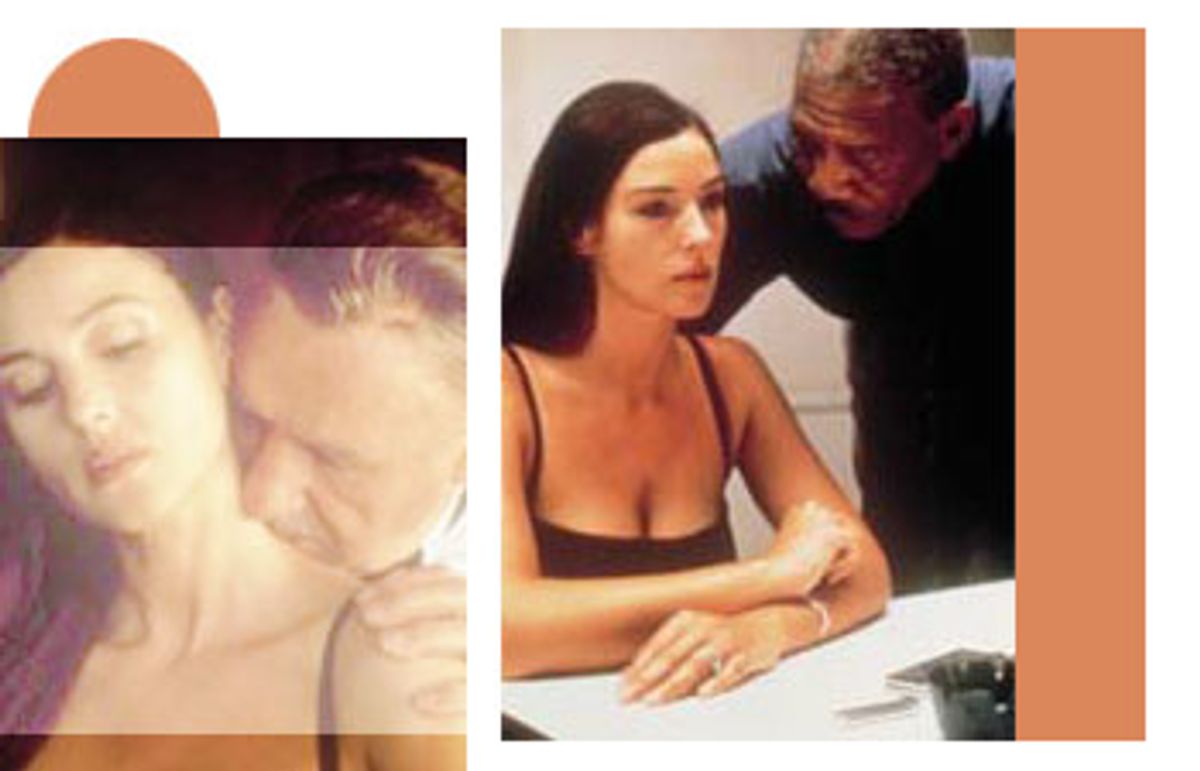 You could argue that "Under Suspicion" is no better than a two-hour episode of some tough-minded cop show -- like, say, the late, lamented "Homicide" -- with an overlay of Caribbean decadence. Amid this year's dreary movie calendar, there's absolutely nothing wrong with that. This is the kind of moody, tense thriller that claims to have things on its mind, but like most thrillers, what it really has is atmosphere and trickery garnished with a little dime-store existentialism: There is no absolute truth, we're all guilty of something, etc. Still, put together two cagey stars who never overplay their hands, one showy young director eager to strut his stuff and the ever-so-slightly oppressive atmosphere of Puerto Rico during Carnival week, and you've got an engrossing, gem-hard little popcorn-cruncher.

Gene Hackman gets top billing in "Under Suspicion," and not without reason. He plays pretty much the same professionally disgruntled American male as always, but even by Hackman standards, millionaire tax attorney Henry Hearst is a head case. Henry's doing his best to play the role of a happy man in paradise -- a filthy rich Anglo in the tropics with a gorgeous young Euro-Caribbean wife (Monica Bellucci) -- but his best isn't too good. His lack of self-knowledge is total, and you can just about see the uncontrollable rage coursing through his body like some exotic parasite. Henry lies to himself, his wife and the world; dimly, somewhere inside, he's aware of his own duplicity and corruption.

So Henry's a monster, but is he a monster? We don't know, and it's not at all clear that he knows either. But Victor Benezet (Morgan Freeman), the local police captain, who has known Henry for years and never much liked him, is beginning to develop a theory on this question. When we first meet Victor, he's pouring himself two fingers of Bacardi at the sink, before trying to fix the ceiling fan in his ramshackle office. Freeman is the quieter and more measured of the two actors, but ultimately his role may provide the most surprises. Like Hackman, Freeman does not resist playing to type, and Benezet's cavernous eyes and doleful demeanor make him a close cousin to the detective Freeman played in "Seven": a defeated pro, refusing to let the defeat interfere with his professionalism.

Two young girls have been raped and murdered in two very different San Juan neighborhoods over the past couple of weeks, and Henry's stories about why he was nearby on both occasions seem half-baked and inconsistent. Victor invites Henry to drop by for a 10-minute chat before the charity benefit Henry is hosting for Puerto Rico's most prominent citizens, including the police commissioner. This chat, of course, gradually becomes a confrontation and a mutual interrogation, with the tuxedo-clad Henry trying to get out of the police station before he suffers a personality meltdown and the dogged, guarded Victor trying to force his longtime adversary into an indefensible psychological foxhole.

Ordinarily, this kind of setup will produce a talky, stagy film that depends largely on generating an air of claustrophobia; indeed, "Garde ` Vue," the 1981 French thriller on which "Under Suspicion" is based, fits that description. But director Stephen Hopkins, whose cleverness and visual flair have mostly been expended, until now, on incoherent tripe like "Lost in Space" and "The Ghost and the Darkness," manages to stretch this film's use of time, space and memory in truly arresting fashion.

As Henry, increasingly confused and uncertain, struggles to explain away the circumstances that seem to link him to the killings, the movie breaks its two antagonists out of the police station into a series of haunting scenes that are not quite memories and not quite fantasies. When Henry "discovers" the second dead girl while jogging one morning, Victor is there, kneeling next to him in the underbrush, asking more questions as he touches her face with dispassionate tenderness. As Henry cruises the street hookers of La Perla, a rowdy seaside neighborhood, drunk on booze and self-hatred, Victor stands there expressionless amid the junkies and thugs watching him go by.

Hopkins wisely doesn't try to juice these scenes up with pseudo-noir cinematic trickery, and they're plenty creepy the way they are. More important, they carry what seems like the movie's central idea: Memories are only stories we tell ourselves and others about who we really are, and they're about as reliable as all other works of fiction. These flashbacks, whether they contain truth or lies or something in between, also serve to sharpen your focus on the movie's details, as you realize that they contain crucial clues to the mystery (or at least they seem to). I won't issue any spoilers, except to suggest that the central question of "Under Suspicion" is what's going on between these two embittered, middle-aged men, rather than who killed the two girls.

I don't know whether it's really possible for an English-speaking North American to end up as a police captain in Puerto Rico (yes, I know it's part of the U.S.). But the fact that Henry and Victor are outsiders in the island's Latino society only heightens the tangible sense that they're connected to each other even as they're disconnected from the life around them. Henry taunts Victor for being a divorced loner, but as we soon learn, Henry's trophy wife hasn't slept with him since witnessing a troubling incident that may confirm Victor's idea that Henry is a pedophile. Early in the film the cocksure Henry jokingly urges Victor to "confess" that he dreams of destroying Henry in a last-ditch effort to save his career. But before long he's talking himself straight toward Death Row, blurting out sexual fantasies about young girls and their bodies, "hard and firm and tight, the way skin is supposed to be."

Bellucci is mostly in the film as window dressing, and with her raven hair and Sophia Loren figure, she certainly fills the bill. Yet the complex blend of loyalty and loathing her Chantal feels for her husband eventually feeds into the narrative Victor and Henry gradually construct, which seems to explain who all three of them are and what they're doing. As Victor's belligerent assistant, the handsome, rather feral Thomas Jane plays a key supporting role, pursuing every available red herring and muddying the waters at every turn. Fundamentally, I still think the gospel this tightly packaged entertainment preaches -- that we never know what we think we know -- is kind of trite. But what do I know?