The honorable psychic who silenced skeptics, predicted both world wars and cured illnesses barely made a dime off his bizarre talents. 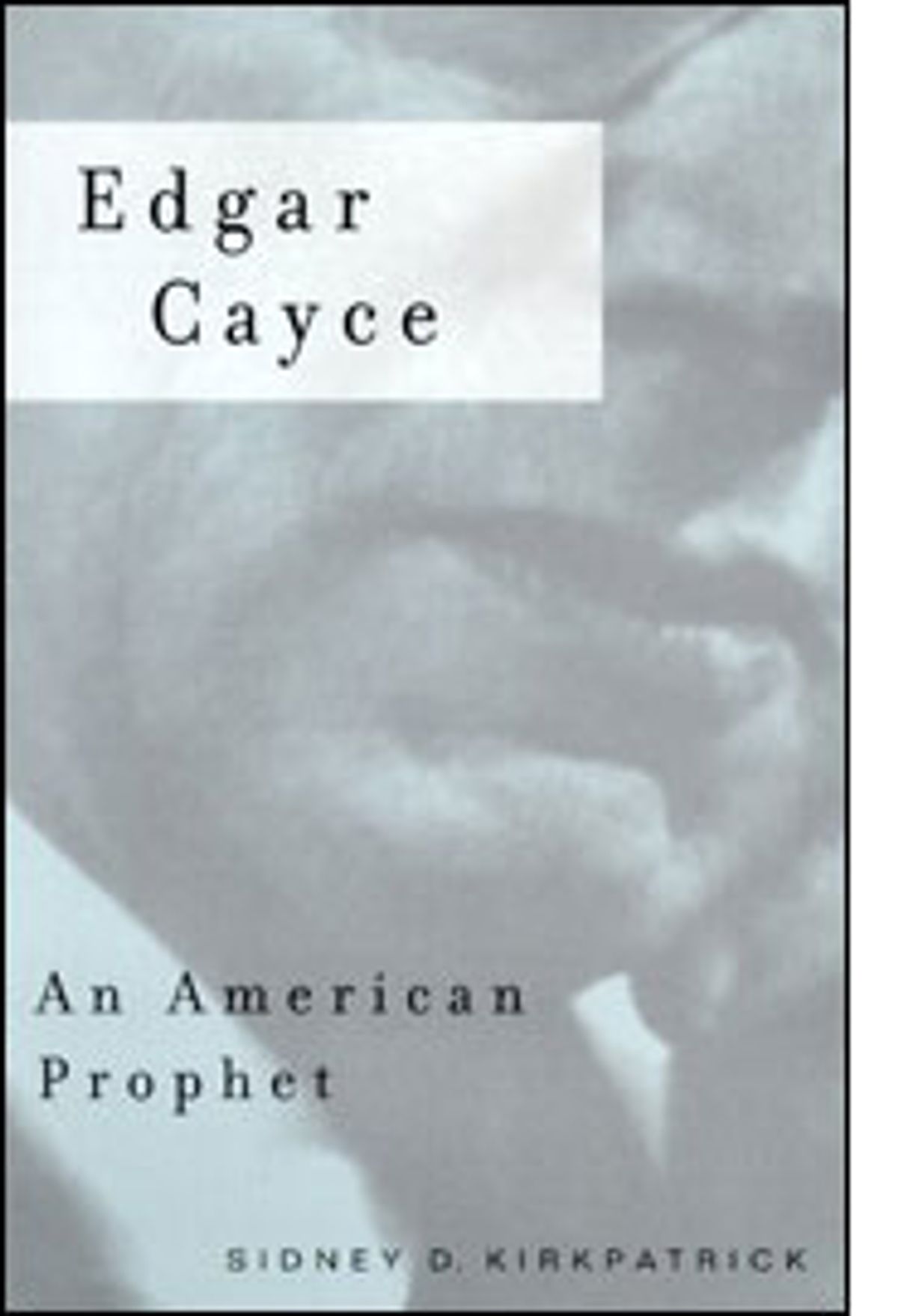 Mention Edgar Cayce (pronounced "Casey") to most people and you get a rummaging through mental files and a query: "Wasn't he some psychic?" Yes, but not in the infomercial sense, or even the Jeanne Dixon or Nostradamus sense. Of course, many lump Cayce in with the countless bunco artists who've posed as psychics, but Cayce is not so easily dismissed. He would have been ruefully familiar with this knee-jerk skepticism. But what's amazing about reading Sidney D. Kirkpatrick's "Edgar Cayce: An American Prophet" is that once you learn Cayce's story, you side with him against his detractors. You feel for him. You (pretty much) believe him. In fact, if anybody in the psychic realm has ever been the real thing, he was it.

So who was this wonder, whom the New York Times once called "the most fascinating man in America" and who was consulted by, for starters, Thomas Edison, George Gershwin, Woodrow Wilson and Harry Truman?

Born in 1877 in Kentucky tobacco country, he was the son of a hard-drinking, philandering, failed businessman. Young Edgar came to his calling early. Some ascribe his talent to a fall on a nail that pierced his brain at the age of 3. Who knows what unfathomable calculus of reramped brain waves and access to -- oh, I'll just say it -- the collective unconscious made this theological prodigy what he was? This much is true: From childhood on, Cayce was subject to visions and could perform extraordinary feats of memory. At 14, he memorized a 110-page congressional speech in one night, purportedly by simply sleeping on the document. Later, his powers leaned toward the medical. Indeed, he developed a singular ability to "enter" the body of a sick person who was hundreds of miles away and provide a pinpoint diagnosis and treatment, though he had no medical training. I know what you're thinking: big scam. But a parade of would-be debunkers -- doctors, scholars and celebrities (including Houdini), plus hundreds of patients -- poured out astonished, grateful testimonials to Cayce's veracity.

Medical diagnoses segued into general predictions of the future. Cayce learned to harness his psychic abilities by recording his trance readings: This slight, unassuming man predicted the onset of World Wars I and II, the stock market crash of 1929 and hundreds of individual events. He didn't just deal in futures. He also came to embrace reincarnation and gave insights into past lives. Lest you think "Holy Shirley MacLaine!" know this: Cayce's readings took their cues less from gossip and more from scholarship, including a fascinating series on Jesus, elucidating details that would be borne out by the later discovery of the Dead Sea Scrolls.

Cayce would remember nothing when he awoke from the trances, which delivered the streams of often cryptic information from what he called "the Source." He also frequently served as a conduit for specific people or (as if that weren't eerie enough) angels. The subtext of all this is at once darkly problematic, fascinating reading and -- if you let yourself roll with it -- inspirational. One would think Cayce's extraordinary abilities would have placed him in some lead-lined, subterranean government vault, or at least in the center of a hugely popular radio show. But while Cayce begat controversy and became a minor celebrity, his bizarre talents forced him and his family into seminomadic penury. His dream was to use his abilities in the service of his mystical Christianity. In 1929, the dream came true in the form of an endowed hospital in Virginia Beach, Va., that would solicit medical advice from the Source.

But fundraising ran afoul in fruitless searches for oil, buried treasure (!), hot stock tips and the psychic medical business. We watch helplessly as "friends" are won over by Cayce's gifts and guileless love of God, then become confidants and finally custodians of Cayce's hospital vision before appropriating it for their own material ends. Lawsuits abound. Illusions are shattered. As Cayce laconically understated, "I'm just not that good a businessman."

With his perceived dream in ruins about him, Cayce begins again. It was not, he realizes, about money, oil or even a hospital to help the sick. It was about a return to God after lifetimes of preparation. As the Source stated: "The primary object of all human experience was to become a worthy companion to God." It's sobering and compelling to watch Cayce accept the challenge of the faith that underscores his legitimacy as a psychic. There is no 900 number flashing beneath a grainy TV image. This was a prophet without profit.

Other biographers have had a go at this rich material, but Kirkpatrick, award-winning filmmaker and author of the acclaimed "A Cast of Killers," was allowed the first (and possibly the last) comprehensive access to the Cayce archives. His prose can be workmanlike, and the sheer volume of psychic transcriptions (the Cayce Archives number 170,000 pages!) can wear. But the meticulousness of Kirkpatrick's method can't help providing fresh insights. As if suffused with the significance of his subject, he carefully reassembles the quotidian mosaic of Cayce's world, from Kentucky tobacco farm life to the minutiae of running an early-20th century photography business (one of Cayce's first professions). There are even touches of inadvertent comedy: You've got to love, for instance, the dream in which Cayce dines out with the Duke of Windsor, Mrs. Simpson and an ebullient Jesus Christ, resplendent in evening wear. I could have lived without Kirkpatrick's windbag descriptions of the lost continent of Atlantis and even some of the more discursive of the Source's pearls. But in the end, Kirkpatrick seems a mere conduit; it's Cayce himself -- soft-spoken, courageous, honorable, transcendent -- who matters.