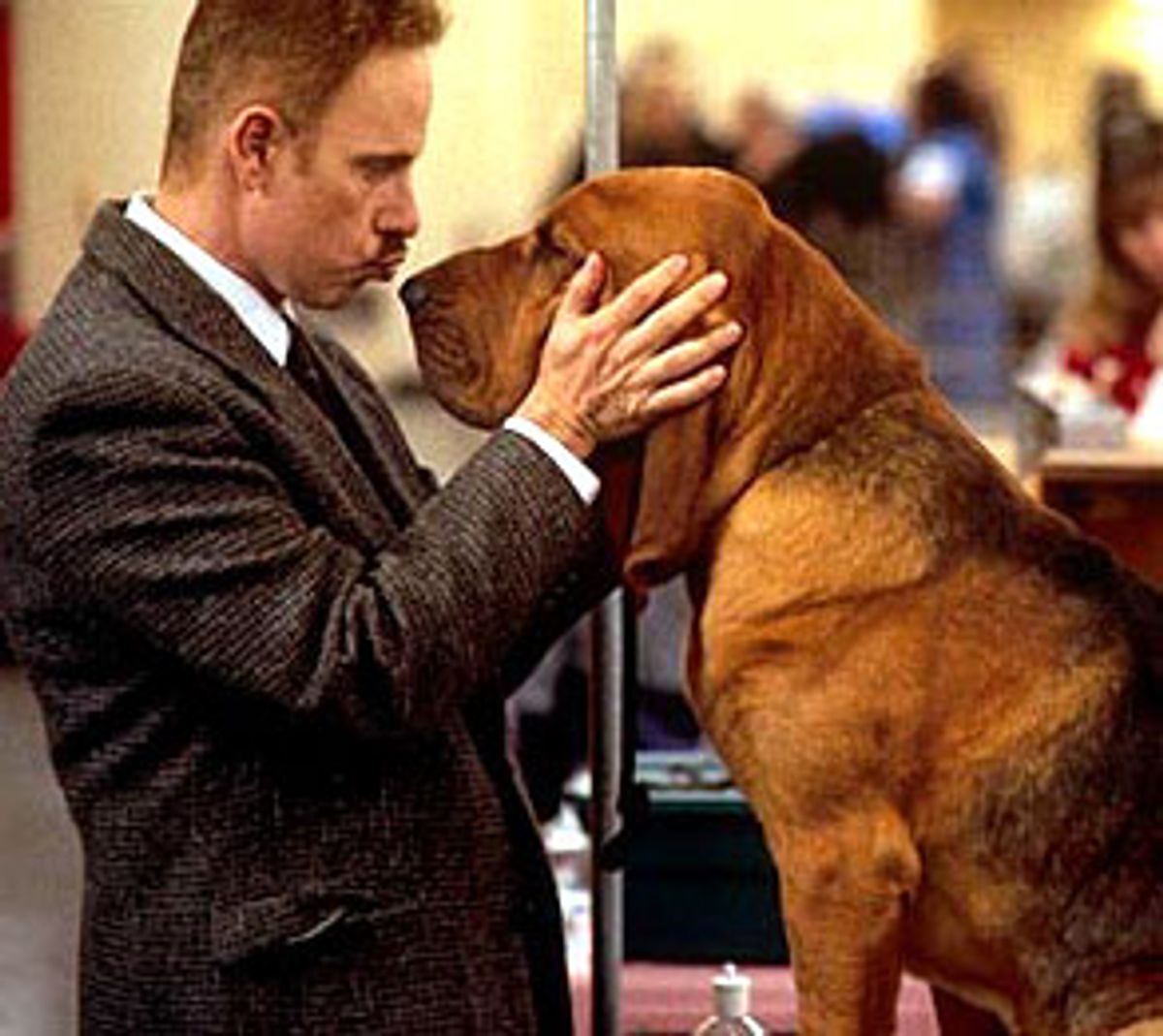 Satire, by its very nature, isn't a terribly kind beast. More often than not it's intended to trample over people, to gleefully expose their hypocrisy or pretensions or just plain ridiculousness, and if its targets are deserving, it can be delicious.

But even within those terms, on the basis of the three "mockumentaries" he has played a key part in -- from 1984's "This Is Spinal Tap" to 1996's "Waiting for Guffman" to the new, and delightful, dog-world comedy "Best in Show" -- Christopher Guest has proved himself to be a breed apart among satirists. His comedies aren't so gentle that they sag; there's always a bit of bite to them. But they're a rarity in that they never sacrifice essential human kindness in a mad elephant stampede for laughs, the way, say, the smug beauty-pageant spoof "Drop Dead Gorgeous" did. Guest pokes fun at ordinary people without poking them full of holes, and it's precisely that approach that keeps his comedies afloat. Meanness comes cheap -- but it's heavy.

Guest co-wrote "Best in Show" with his "Waiting for Guffman" collaborator, SCTV veteran Eugene Levy. "Guffman," the chronicle of a Missouri community-theater group entranced by the idea that their little play might have a shot at Broadway, ambles along so gently that it sometimes loses you along the trail. But Guest and Levy (both of whom also appeared in the film, Guest as the play's clearly gay but closeted director, Levy as a dentist proud of his knack for borscht-belt-style humor) never allow their small-town characters to become objects of our condescension.

The picture walks a fine and shaky line -- it invests everything in its characters without ever being dreadfully heartwarming. If it never quite gels, it's at the very least a triumph of tone over 'tude, a feat that plenty of alleged laugh-a-minute movies are never able to pull off.

But with "Best in Show," Guest and Levy -- who also star, along with a top-flight team including "Guffman" cohorts Catherine O'Hara, Parker Posey and Bob Balaban and Michael McKean of "Spinal Tap" -- finally pull everything together into an agile and effortless entertainment. A parody of the world of purebred dog competitions, where the owners have even more character than their four-legged, button-eyed friends, it's a marvelously accomplished ensemble comedy: Every actor makes an impression, and the picture trots along at a terrier clip.

"Best in Show" follows a ragtag group of dog owners who travel from all over the country, hoping against hope that their pups will take the blue ribbon at the prestigious Mayflower Dog Show.

There's the husband-and-wife team played by Levy and O'Hara (who once again channels her own peculiar brand of comic brilliance from the planet Zontar), with their Norwich terrier, Winky; John Michael Higgins and McKean, an affectionate and outlandishly dressed middle-aged gay couple, with their Shih Tzu, Miss Agnes; ludicrously high-strung lawyers Posey and Michael Hitchcock, with their hyperanxious Weimaraner, Beatrice; loaded-and-stacked trophy wife Jennifer Coolidge and her close pal and top-notch trainer, Jane Lynch, with their standard poodle, Rhapsody in White; and Guest, the gentle-spirited and drawling owner of a North Carolina fly-fishing shop, with his beloved bloodhound, Hubert.

Anyone who has caught snippets of the Westminster Dog Show on TV will see how carefully Guest and his crew have researched the details of dog competition. (Note the badly but cheerfully dressed judges.) Here, though, the dogs may be cute, but it's the people who steal the show.

As in "Spinal Tap" and "Guffman," much of each actor's role was improvised around Guest and Levy's bare-bones script; it's rare to find such a large group so wholly in sync. Guest and his gang prefer jokes that ricochet: Sometimes their lines swing around and hit their mark, one delectable half-beat later; other times they escape into the ozone, hapless dust motes with no real mission. But even the free-floating jokes that fail to hit home contribute to the picture's overall vibe: No joke ever feels wasted. There's an admirable economy to "Best in Show," an understanding that the best comedy isn't just a string of gags but a picture that fills itself out gradually and completely, with plenty of laughs tucked in along the way.

So even though Posey, as a shallow lawyer besotted with the J. Crew lifestyle, may not have one particularly memorable funny line, her character, built from carefully layered and multihued strata of neuroses, becomes brain-rattlingly funny by the end of the picture. Levy plays a mild-mannered and well-meaning suburban hubby whose character has, literally, two left feet. (We see them shod in matching lefty Hush Puppies.) But it's his face, with those black-mink caterpillar eyebrows and willfully protruding front teeth, that makes his feet seem so funny.

When McKean points out with scolding good humor that his boyfriend, Higgins, has packed six kimonos for a 48-hour trip, Higgins corrects the shortfall by tossing in two more. (Higgins and McKean play their characters as obvious stereotypes but without a trace of the mincing meanness you often see in characterizations of gay men, and the affection their characters feel for each other is palpable.)

Even the peripheral characters feel like essential parts of the whole. Balaban, as Theodore W. Millbank III, president of the Mayflower Kennel Club, has a brief but hilarious bit that sneaks up on you: He makes you lean forward ever more carefully to listen to his spiel about the significance of his organization before you realize that it's dissolving into senseless dog-babble. And Fred Willard, as the addled, motormouthed dog-show commentator who doesn't have the faintest idea what he's talking about, carries his preposterous dada patter to a genius level: By the time he'd compared a disgraced and disqualified dog to Shoeless Joe Jackson, I'd officially lost it.

Through it all, it's easy to see how Guest sets the tone with his performance as Harlan Pepper, the bloodhound owner. When we first see Harlan, he's poring over a map of a local lake with two buddies from his fly-fishing store (in Pine Nut, N.C.) -- the three of them are discussing the merits of taping the appropriate fly to different areas of the fishing ground and selling the maps to tourists. It seems like a prime setup to make fun of the hicks, a conduit for jokes to make "sophisticated" viewers feel superior to the backwoods crackers.

But once Harlan gets talking about his pup, Hubert, affectionately massaging the dog's voluminous folds of skin as he sings his praises, you realize Guest's intention is exactly the opposite. Harlan is immensely likable but not uproariously funny: For "dog," he says "dowg," but there's music, not derision, in the word. As he and Hubert make the big drive to the dog show, Harlan amuses himself by softly singing Hank Williams' "Honky Tonkin'" -- to foolish and uneducated ears, it's just a song that a dumb hick would sing, but to anybody with half a brain and a modicum of good taste, it's a number inextricably entwined with pop-music royalty.

Guest is a very funny actor, but he's an astonishingly graceful one, too -- you can see it in the way he invests everything he has into even a relatively small character. When Harlan leads Hubert in front of the judges, Guest's body language conveys his character's nervousness and intense concentration. Harlan's regal and stiff-backed trot represents formality, determination and a dignity that can't be undone by the light-colored socks he's wearing with his dress slacks.

Guest doesn't make a mockery of Harlan, but he doesn't invite bathos or misguided sympathy, either, an approach that's symbolic of his conscientious good humor as a filmmaker. With "Best in Show," Guest revels in the eccentricities of dog lovers everywhere, but there's kindness at his core. He's a mensch among mutts.