Linux and the lady

A hacker's tale of his infatuation with a high-priced, computer-literate escort. Or is she really an empathic metamorph? 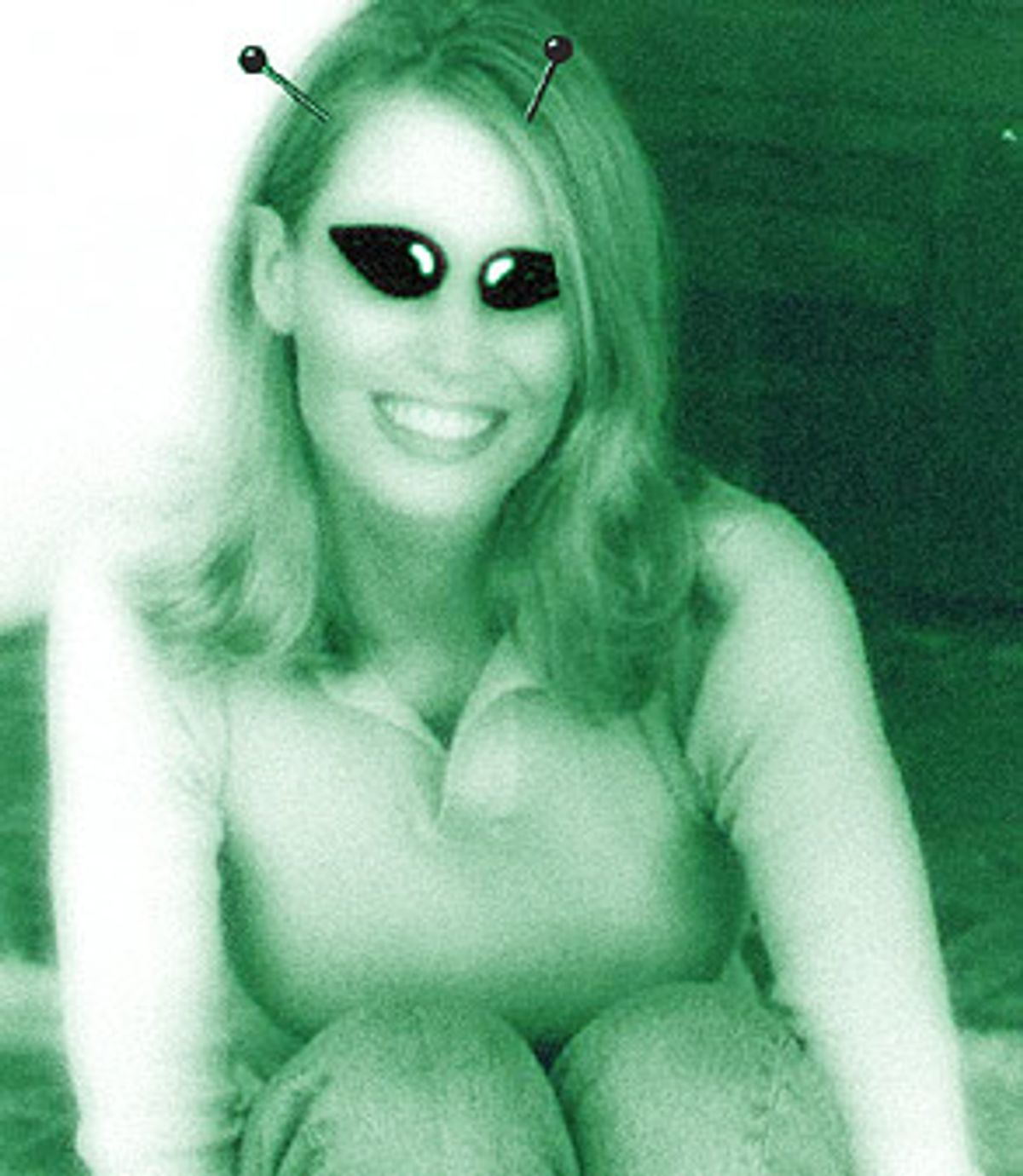 A co-worker showed me a link. Hmm, an educated escort? $12,000 a day, with a two-day minimum? There was a FAQ. It was good, especially this:

"I sit and read Thoreau and eat plums and fresh cherries in the hotel. Seriously, what we decide to do with the time is our business. I am sure that you will be quite pleased."

I notice that her pictures have Photoshopped eyes; they've been softened and blurred and might not even be hers. I surf some more and find that "she" has a link on her Web page to Slashdot -- geek central. Slashdot? I was intrigued. Who was "she?" A company? A front for some shady character who might be gathering e-mails or phone numbers? A Slashdot-type joker playing a trick? Or was "she" real?

I decide to employ a tactic from the recent movie "The Tao of Steve": Step No. 1 -- Eliminate Desire. I e-mailed her about the Photoshopping and the Slashdot link. See, I was asking about tech stuff, taking an interest in her page layout, not her body layout. Half an hour later "she" -- using the name "Anne Marie" -- responded, from an encrypted Hushmail account, which I thought was smart if she was real. Smart, and also undeniably attractive, for a guy like me. I guess I'm a sucker for crypto-girls.

She said, "I have a Slashdot link up because I have been a longtime fan of the site and have a degree in computers." She also said that Slashdot mentioned her site earlier this year in this piece: and it sent so many hits that it "slashdotted" her site and crashed it. She had altered her own pictures to protect her identity, as it says on her site. (Read The F---ing Manual, dope!) "She" said she is real, built the site herself and does all her own marketing. Oh, and she is currently reading a book on UFOs and anti-matter.

"Computer Science, UFOs and anti-matter," I responded, "that's sexier than your pictures!" To myself I think: I might be able to talk to this woman for more than 10 minutes, not like the other supermodels I usually date ...

Oh, I know what you're thinking: She was playing me like an optical mouse and I was singing while I watched her click my buttons. Time for Step No. 2 from "The Tao of Steve": Do Something Excellent. Hmm. I'm stumped here until I get an e-mail from her where "she" says she took a look at my Web site and liked the writing. I check my stock portfolio, calculate its current worth and wonder if she would accept the fraction of two days that it would cover. Make an exception for me? She said she liked my writing ... I show a co-worker the e-mails and I blush uncontrollably. I feel like I'm sinking into a very dangerous fantasy area, but it's soooo fun.

Then the writer at Yride, a wonderful-crazy-ghetto-guerrilla start-up where I work, decides to try and get a story out of her, so he calls her and pretends to be a "high profile" CEO named Cameron. She calls his cellphone back and leaves a message. Trouble was, his message says his real name: Mark. So he calls back and says Mark is his "associate," acting as a security filter for Cameron, a really bad, white-trash kind of word choice lie if there ever was one.

She e-mails me, her knight in shining armor, saying she looked at our site -- but what's going on with Cameron and all that security bullshit? "I have CEOs who call from household-name companies who don't use so much security," she says.

I e-mail her back, blowing Mark's cover and suggesting she play with him if she wants. (I'm playing the nice guy once again.) The guys in the office are looking over my shoulder now, totally into the unfolding "educated escort" story.

Next morning, no news. My fantasies are crushed. No money, no honey. She's gone, like a one night e-stand leaving only sweaty keys and a few blurry mental freeze frames. On a whim I send her this letter that I have half written and I ask her if I can post it, with her quotes, to a mailing list for Webheads in the San Francisco Bay Area I started five years ago. She comes right back (She must have slept in ...) in the afternoon with a long letter.

I find out that she is a real "she." Wow. I discover that Slate has already done a story on her, back when she was only charging $5,800 a day. And she likes my writing. I blush again. My co-workers huddle around my computer reading our e-mails. It's fun.

Then she sends me the e-mail that hits me where I live: "PS so after doing a little search on that nifty program called NeoTrace I see that you use CTS Network Services? Is that a cable line? Or do you guys have DSL down there as well? Let me know. And I use Hushmail to hide my static IP address (I am DSL up here). You'd be surprised what you can find out with an IP."

My face feels hot. My co-workers are making fun of me. My heart pounds. She used IP [Internet Protocol] in a sentence!!! Now that is just super-sexy. I start to think that she could go very far with this new site she's planning. Imagine this: She puts her site on her own server, and then does a seminar at a conference called "Linux and the Lady: How a self-managed escort used Linux servers to keep from going down too often." She'd pack 'em in.

Then she e-mails me, asking what to do about our Yride.com writer. Should she call him back and pretend to be two people, she asks? I give her my number at work. She calls me. Her voice is deep and sexy. We spend a half-hour talking about a new site she's planning. She wants to retire from escorting. There are a couple of touchy moments -- like when I ask, "So, um, are you going to use the same, uh ... business model?" Turns out she put the Educated Escort site up in one night almost a year ago and has had floods of work since then. She only works once a month now, very picky. She explains that with the new site she wants to get away from escorting and "Anne Marie" totally.

Turns out she went to USC for a master's and claims to know some high-powered geeks who I don't want to mention by name because she asked me not to. I mention the classic Dungeons & Dragons connection with geek culture and she confesses she's putting a lot about D&D on her new site. She's thinking maybe 500 or so guys at $20/month. "Maybe I'll do yoga, or lean over to read Thoreau, and there will be lots of pictures with laptops," she breathes into the phone. She says she's got a non-porn shoot this weekend with geeks and her.

Talking to her, I hold back on asking for a dinner date. But I'm undeniably challenged by the thought of meeting her. What's that worth hourly? I'm under her spell, the spell that she uses to get geeks to willingly pay $500 an hour to be with her for 48 hours, including sleeping, going to the bathroom, eating, so that's ... Anyway, the call was great and I didn't ask anything, even cutting it short because I was late to meet friends.

I drive home thinking she likes me a little more than the rest of the guys who hound her. I'm different. The "Pretty Woman" myth has seeded deep in my brain. I wonder how I could do a story about her for a magazine. I'd have to meet her then but I can't remember the third step in "The Tao of Steve." Time for a trip back to imdb.com and one more e-mail ...

"Retreat" -- that's Step No. 3, so I hold off responding to an evening e-mail until late the next morning. I say I have to start charging for any more new business advice, and I give her my Internet consulting fees. I too offer discounts for longer periods of time, but I've yet to stop the hourly work and make a minimum two-day rate. Not a bad idea perhaps.

With time to think I remember my favorite episode of "Star Trek: TNG," called "The Perfect Mate" (Production No. 221, 04/27/92, Stardate 45761.3 -- check out the preview). You see, Anne Marie is quite possibly the first empathic metamorph to visit Earth.

Here's the description of an empathic metamorph: "After being bumped by the Ferengi, the cocoon-like structure that houses the gift dissolves, revealing an exotic and beautiful woman. The woman, Kamala, explains that she is an empathic metamorph, a rare creature born with the ability to sense what her mate desires and become what he wants her to be. From birth, she has been raised to be a gift to Alrik, whom she will imprint herself to as a token of peace. However, since her seal was broken prematurely, she is in a vulnerable state, sending out powerful sexual signals to every man she comes in contact with."

Maybe Anne Marie's a real Kamala? As one of my friends on the mailing list responds to my first letter: "Nice story Caleb. Unfortunately, she's definitely an alien. She's here on Earth to begin the takeover ..."

Suddenly I sell my letter to Salon. Now I can call Anne with relish. Ha! I'm the one who's going to end up getting paid. Of course my new automatic bill payment system broke and my landline was disconnected when she tried to call back. Ironic? Painful? Makes me look like a loser? Yes, but we finally get in touch on my cell. We talk for an hour and a half during which I force down the desperate man inside me and whip out my trusty reporter hat.

I ask her if she is in fact an alien empathic metamorph hatched too early!? And can we get any pictures? Can I tell the Salon readers that her new domain will be brainyblonde.com and that a famous geek will be in the first picture when she launches? "Sure, and that's the first mention of it," she says. An exclusive!

We talk more, surfing sites we like together, discussing Woody Allen's short story "The Whore of Mensa," geisha girls, why IE 5 won't let her cut-and-paste out of Hushmail and whether or not Netscape is still a better browser in some ways.

Near the end of the call, I take a deep breath and ask her if she would go on a date with me if I asked her? Even though the allure has paled a bit next to the excitement of getting published, and she is two inches taller than me, and I always thought of myself with a dark-haired woman ... and it's a long drive to L.A. just for dinner. Besides, I'm out of shape and I think I'd feel embarrassed -- like a lot of geeks, I can run risky meatspace things through my head until a faulty value comes out that suggests there's no need to actually do them.

But I ask her to lunch to celebrate the story being published.

Should I keep the audience in suspense? Nah. She said she would be glad to, she hasn't been out on a real date since her site first went up.

Caleb John Clark is a freelance Web worker and writer.