An ode to Sydney

Mistress of the meeting of land and water, the Australian seaport overflows with beauties large and small. 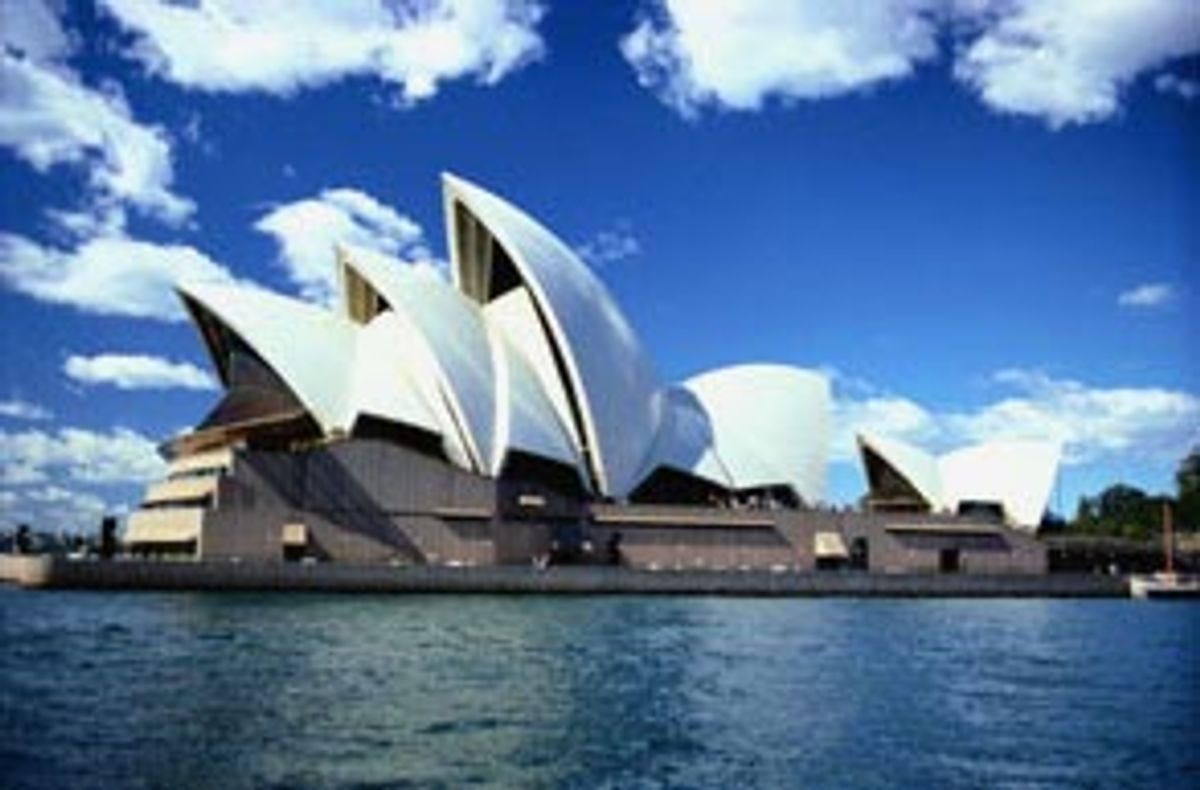 Before they departed to lie on the beach at a famous hippie-cum-New Age beach town up the coast called Byron Bay, my hosts took me out to lunch at a restaurant on the north side of the harbor, near the zoo. After parking we walked down a junglelike path. Big, brightly colored tropical birds concealed in the trees squawked harsh, alien cries as the sun poured down. Nobody was around. The restaurant was located in a national park and looked out a sloping lawn to the massive arc of the Harbor Bridge and downtown. Large, amiable green and yellow Hong Kong-style ferries steamed into and out of a nearby dock, carrying people to and from downtown. It was a flag-fluttering afternoon, like a Raoul Dufy painting. The air was fresh and the sun had just a satisfying taste of menace. When it's 75 degrees here, it feels like 85 -- the rays are a little stronger.

Food in Sydney is superb. Australian cuisine is similar to Californian -- it's based on fabulous fresh seafood and produce and is an eclectic, creative mix of Asian and native elements. You can still chomp on such stolid John Bull standbys as meat pies and fish and chips, and I've devoured a pie or two under duress, but why eat food that was out of date in Falstaff's day when you can have fresh ocean salmon with pesto-ginger sauce?

The food in this restaurant was only OK, but who cared? The Australian chardonnay was good, the view was sublime and nobody was there. Afterward Mark and Jean had to go back to work, so I took a stroll through the park before catching the ferry across to Circular Quay. I ambled along a fragrant boardwalk on a wooded hill above the shoreline, admiring the unfamiliar bay-leaf-like subtropical vegetation. There was nobody around except the birds. I looked down to see a little deserted golden beach tucked into the shore. A hundred yards offshore a sailboat rested at anchor, four or five guys hanging out in the stern with beers. Powerboats, sailboats, ferryboats, steamers, water taxis churned jubilantly about in the distance, like slightly overcolored props in a musical. The feeling was of an endless picnic. You could smell thousands of barbecues smoking at once, countless gin and tonics being poured.

As I strolled back along the trail cut into the sandstone headland, it struck me that Sydney possesses that quality that all great cities have, a kind of casual overrichness, an overflowing beauty that spills over like a gushing fountain in the most far-flung and unexpected places. In Rome, it's the fathomless history and the intricate joys of the city's piazzas, which you come upon like prizes left only for you at the end of a delightful pink maze; in San Francisco, it's the spectacular, vertiginous meeting of hills and ocean, a great white frozen explosion at continent's end; in New York, it's the audacity of its urban scale, the almost terrifying hubris of a city built so long and high and powerfully that its skyscrapers seem to be natural objects.

In Sydney, it's the harbor. Take away its harbor, and Sydney is a pleasant but not extraordinary city, distinguished by a few historical districts and an oddly appealing New Orleans-like residential architecture. But throw in its harbor, and Sydney is stunning -- an endless festival of a city, at once glamorous and oddly relaxed, refreshing itself around every corner with more blue, blue, blue.

The other day, on a beautiful, sunny cloud-spattered afternoon just before the rains came, I had a few hours before an event and decided to go for a spin on my bike. There is only one way to really see a city, and that is by bicycle. Driving is good, but you miss out on the details. Walking is great, but you don't get the speed rush and you don't get to make casual 1,000-yard mistakes that you can correct in a couple of minutes. Riding a bicycle opens up the heart of a city, lets you cut through it like a low-flying bird. And it's even better when you have no idea where you're going.

I ended up cruising through a neighborhood called Glebe. The houses throughout Sydney -- including the one I'm staying in -- are mostly so-called terraces, Victorian-era buildings with flat facades and upstairs balconies with lots of lace ironwork. There's something almost surreal about them, a combination of down-to-earth British solidity with a breezy, tropical, open-to-the-air feeling. In fact, that odd and oddly endearing combination of elements pervades the whole city -- the best of West and East coming together here on the happy hidden underbelly of the world. I sailed past alfresco cafes filled with young people reading the paper, past restaurants doing a thriving brunch business, and ended up dropping down a fairly steep hill to the water yet again, on an obscure street that ended near a big factory. It's everywhere, the water here, and it collides with every part of the city -- residential, office, industrial -- in an endless horizontal dance. Tourists see Darling Harbor and Bondi, but the real joys of Sydney for me are these unexpected glimpses, these minor revelations. I've seen almost nothing of Sydney (the Games have seen to that), but I know there are thousands more of these places, tree-shrouded beaches and little peninsulas and funny dead-end streets that roll down to the never-ending sea.

And then it was on to the heart of the city, through the jammed streets to Circular Quay and the Opera House. What can you say about a building that explodes impossibly up and out, like white sails puffing up in the wind? It's pure joy, and the signature of this happy and glorious city.