"The Amazing Adventures of Kavalier & Clay" by Michael Chabon

In the rapturous, panoramic new novel by the author of "Wonder Boys," two midcentury comic book writers battle evil and celebrate escape in all its forms. 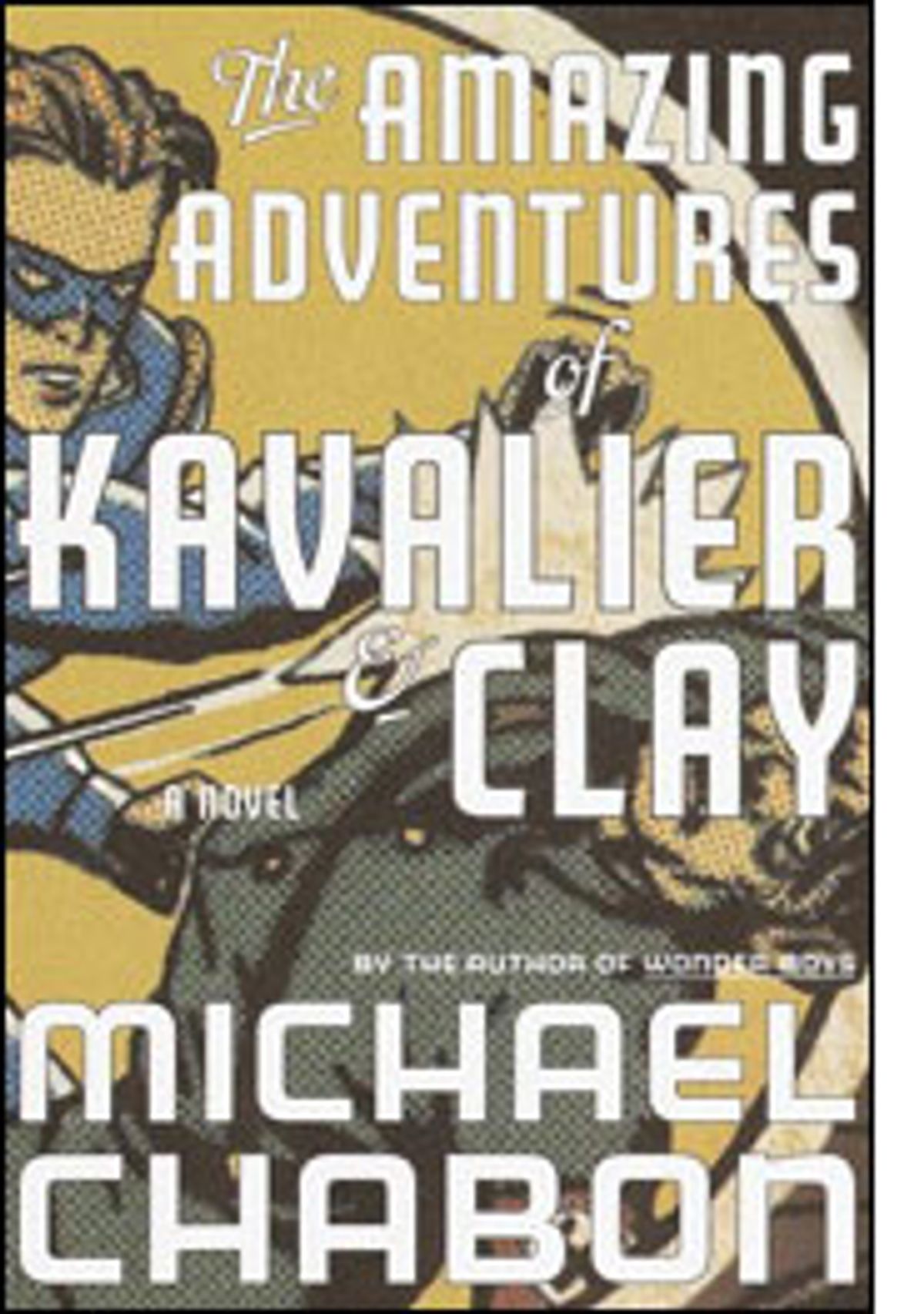 Despite its heft -- it weighs in at 639 pages -- Michael Chabon's "The Amazing Adventures of Kavalier & Clay" is a speedy, nearly effortless read. The action zooms along, with plot twists worthy of a pulp fiction potboiler and characters of delicious pumped-up proportions like the Mighty Molecule (a circus strongman), Tracy Bacon (a B-movie king with a lantern jaw and sonorous "string-bass" voice), Longman Harkoo (an art mogul) and the Saboteur (a sinister self-proclaimed Nazi guerrilla), delivered in Chabon's flawless musical prose and punctuated -- Bat! Bam! Bif! -- with feats of physical prowess and derring-do.

It would seem like a guilty gorgefest, a sugary pop concoction, if, like pop art itself, it weren't so heavily fortified with all the vitamins and minerals of true art.

The novel opens in 1939 as Sam Clay (ni Klayman) of Brooklyn, N.Y., a glorified errand boy and aspiring comic artist, meets his long-lost cousin, Josef Kavalier, who was smuggled out of Hitler's Prague thanks to his apprenticeship as a Houdini-like escape artist, with a golem as his undercover ally. As the two cousins cobble together a cigarette out of stray flakes of tobacco, it becomes apparent that they can make something out of their combined talents and ambitions. With Joe as lead artist and Sammy as lead writer, the two fuse the stories of their past into their first comic book, one that will make their name and their fortunes, as well as give expression to their artistic desires and political rage. In the guise of the Escapist, a costumed superhero who "comes to the rescue of those who toil in the chains of tyranny and injustice," they fight their own demons (personified, quite literally, by Hitler and Nazi Germany). Later, they introduce Luna Moth -- called by a delighted publisher "the first sex object created expressly for consumption by little boys" -- styled after Joe's girlfriend, Rosa Saks, a Greenwich Village bohemian and later a comic book artist in her own right.

One feels at times that Chabon is so deeply in love with his characters that he can't bear to do them harm. Wrapped in the teflon cloak of their author's unconditional goodwill, Sammy and Joe take on nearly superhuman powers: Their harebrained schemes lead to fame and fortune, often in a matter of days. Their loves are requited. They hobnob with the likes of Orson Welles, Salvador Dali and Joseph Cornell (whom Joe is said to resemble, in that both are "striking out for the sublime in a vessel constructed of the commonplace, the neglected, the despised"). Stan Lee knows their name. Greedy bosses prove to be good men with the boys' best interests in their hidden hearts of gold, and their enemies are foiled in the nick of time. This leads to some rather implausible last-minute saves, including one especially improbable sequence in which a well-timed phone call to Eleanor fucking Roosevelt (someone happens to have her number) saves the day.

Luckily, the reader loves Sammy and Joe, too. They are lovable. (In fact, reading this book makes one wonder why so many authors are so ready to saddle their creations with ennui, thwarted ambitions and disillusionment.) Their last-minute saves and superhuman luck and pluck, moreover, are central to the theme of the book, which is the beauty and necessity of escape in all its forms:

It was the expression of yearning that a few magic words and an artful hand might produce something -- one poor, dumb, powerful thing -- exempt from the crushing strictures, from the ills, cruelties, and inevitable failures of the greater Creation. It was the voicing of a vain wish, when you got down to it, to escape. To slip, like the Escapist, free of the entangling chain of reality and the straitjacket of physical laws ... The newspaper articles that Joe had read about the upcoming Senate investigations into comic books had always cited "escapism" among the litany of injurious consequences of their reading, and dwelled on the pernicious effect, on young minds, of satisfying the desire to escape. As if there could be any more noble or necessary service in life.

Of course, the Forces of Evil, qua Hitler, prove to be more than a fair match for a scrappy young street tough with a demonic pencil of rage and a propensity for street fighting, as Joe discovers in the second half of the novel. Joe trades his pen for a sword -- OK, a pistol -- and goes out to fight the war against fascism by more traditional means. The boys' golden period is effectively ended, and the novel obtains the requisite amount of pathos and gravitas, which renders its frenetic, cinematic (not to mention comic) climax atop the Empire State Building (one only wishes that Welles, Joe Kavalier's idol, were around to execute the film version) all the more satisfying.

Each page is thickly iced with Chabon's much-touted lyricism. At its best, it makes you realize just how gorgeous the edges of the world truly are.

At its worst, it functions more as analgesic than aphrodisiac. Take the sky. Most of us would agree that it is, more or less, blue. Yet in "The Amazing Adventures of Kavalier & Clay" we get dozens of metaphors for it, often trotted out at the rate of one per chapter: "The sky was shining like a nickel"; "the sky was as blue as the ribbon on a prize-winning lamb"; the sky was as "blue as a gas flame, with a flickering hint of carbon in the east." It segues, predictably, to gray in the darker third of the novel: "Gray light was smeared across the sky like ointment on a bandage"; "the view out the windows was pure cloudbank, a gray woolen sock pulled down over the top of the building." One is either startled by Chabon's virtuosity or dulled by its repetitiveness. Certain readers may want to shout: Enough already! I know the sky is blue!

But this is a quibble about a book that does so much so well, and with such a light touch. Chabon carefully connects the lithography dots that he, though not his characters, knows will link the commercial art of the '40s with pop art later in the decade. (His footnotes document, among other things, the selling prices fetched by the work of Kavalier and Clay in 1990s auction houses, and at one point a young Roy Lichtenstein is said to have visited Sam Clay's studio.) Many contemporary issues -- homosexuality, the role of women in the arts, censorship, anti-Semitism -- are addressed, though never with the cloying revisionism that can bog down books that try to use history as a Parable for Our Time. This is definitely New York, the old-school version. In the fusion of dashing young men in fresh new $12 suits, the smell of newsprint and burned coffee and laundry, and the courage to face unrelenting evil with pluck and humor, Chabon has created an important work, a version of the 20th century both thrillingly recognizable and all his own.