California's Art Car Fest reminds us to ask questions, race trains, glue things to our vehicles and beware when a 30-foot shark changes lanes on the freeway. 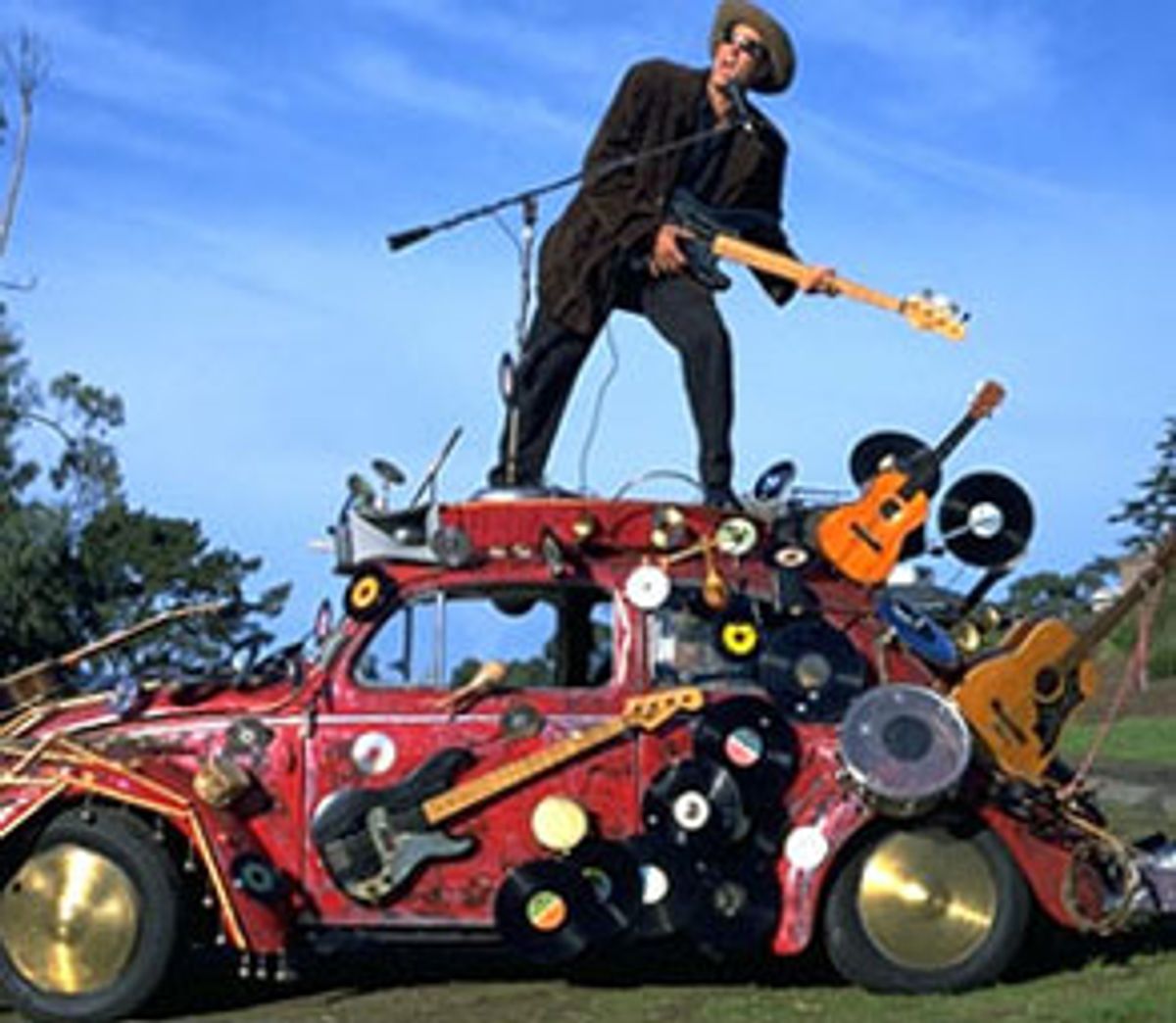 Two Saturdays ago, cars looking like high heels, a mobile cathedral, vans that appeared to be from outer space and something called the Jesus Chrysler cruised into Oakland, Calif., for the latest Art Car Fest. Organized by art car pioneers Harrod Blank and Philo Northrup, the event corralled roughly 60 of the country's weirdest, prettiest and least fuel-efficient vehicles for their day in the sun.

Actually, they get plenty of days in the sun. The idea of screwing with the way your car looks -- attaching some bamboo here, a cow skeleton there -- was virtually unheard of 30 years ago, and now Blank, the son of acclaimed documentary filmmaker Les Blank, estimates at least 500 such odd innovations have taken to the road. In addition to rolling into the Burning Man festival each year, permutations of the Art Car Fest group make it to similar events throughout the country. While California may be ground zero, denizens of Washington, Oregon, Texas and even the boring East Coast have been known to get out the arc welder, paint and glue and transform their vehicles.

But an art car is more than a kooky paint job -- the vehicles are neat enough that they can park and let the audience do the cruising. At the Oakland event, people wandered from car to car inspecting everything from tile mosaics on bumpers to animals on wheels.

Not surprisingly, most art car artists are, well, driven. Take Ron Snow. As art car lore has it, Snow began his horse-themed car, the Coltmobile, after his drinking problem cost him his marriage and time behind bars. When he got out of jail, he transferred all the energy of his alcoholism into plastic colts: every time he wanted a drink, he glued a miniature horse to his car. Fourteen hundred nags later, he's the sober owner of a beautiful ride.

Ray Nelson came to the scene from another angle altogether. A professional musician all his life, in 1982 he built a giant guitar out of his Yamaha motorcycle to promote his music. The Guit-Cycle took over, and Nelson found he had a new passion. People went crazy for the bike, he explains, and before long he'd hopped on it and driven from San Francisco to New York. The bike still runs, and these days Nelson rides it for charity. His organization, Guitars for Kids, helps put guitars in the hands of needy children.

If this sounds touching and expensive, it is. Blank says that while many art car artists have regular jobs, the truly devoted often struggle to make ends meet. While music, say, has the potential to make money, he explains, shaping your Plymouth into a moving bone tower rarely brings in much cash.

Not that Blank isn't trying. After cutting his filmmaking teeth on the 1992 art car documentary "Wild Wheels," he went on to other movie and photography projects. Documenting the burgeoning art car world -- as well as improving it with some cars of his own -- might sound like a worthwhile endeavor, but it's the comparatively dull work of licensing photographs that keeps film in his camera.

Blank has launched an art car agency, trying to bring other artists money for their work. When the occasional corporate event needs a decorated Datsun, he does the legwork.

"Some artists think it's sinful," Blank says of bringing the realm of commerce to the scene. "But when you don't have a job and you want to make money, you have to sell your art somehow."

The anti-corporate streak you'd expect does hover over the vehicles -- you won't find a hood ornament in the lot that isn't custom-made -- but this isn't really the megaphone crowd. In fact, the rebelliousness often seems too intimate for that.

"A lot of art car artists are rebelling against the icon of the car," Blank says. "But sometimes it's more personal."

Blank suggests that some artists are working more against some vision of themselves -- conservative, staid, introverted -- than any corporate iconography. Maybe that's part of the appeal. The rebelliousness is playful and contained, far too creative to be strident.

Not that the beholder always finds it beautiful. Police have generally stopped pulling over art cars (Blank says they've learned that the drivers aren't the "hippies, drug addicts or freakazoids" the cops may have imagined), but certain pockets of the country regard the auto-wackiness with skepticism, and sometimes baseball bats. Blank parked one of his art cars outside an Alabama movie theater in 1987. The car, which featured anti-apartheid messages, lay in pieces by the time the movie ended, and Ku Klux Klan signatures had been un-artfully applied.

But it doesn't take a chunk of wood to diss an art car. Since they've begun to gain prominence (even the New York Times has taken notice), art journals have almost systematically ignored them. Art Week ran a feature some time ago, but most highbrow art publications have turned up their noses. It's an academic point, and for the most part one would rather just look at all the shiny buttons on the hood, but the question does linger: Why isn't this real art?

"Because they're cars," suggests Ola Fetty of ArtForum magazine. "Because cars are about money, maybe? And even though [high] art is also about money, no one wants to admit that."

Blank confirms that decorative art takes a backseat in the art universe, but he's not sweating it. An art car artist generally has more important things to worry about, like keeping tiles from falling off the hubcaps, or making it to the store without getting mobbed by curious onlookers. (Delays are an unpredictable part of life with an art car.)

From the curious onlooker's perspective, you can't help but stare. And it's more than just interesting; art cars hit your favorite anti-authority nerves. After seeing a 30-foot shark change lanes on the freeway, you get sort of riled up. This is not write-your-congressperson rile -- probably something closer to eating 50 eggs.

As luck would have it, a police officer pulled up next to me as I walked away from the Art Car Fest. I'd been racing alongside a passing freight train -- had even overtaken it for half a block -- until I got tired and the train got faster.

"Are you trying to get yourself killed?" the cop asked me. I think they have to ask that question. I told him no. I told him I was just racing it, and that I was sorry. He wasn't listening. He proceeded to lecture me, and generally make me feel guilty, and I thought of another lecture I once heard, several years ago, that -- especially after an art car show -- seemed to make sense. Paul Theroux was talking to a group of young people about authority. He said the way it asserts itself is not by barking orders, but asking questions. Authority backs you against a wall, he said, and asks you what you're going to do with your life.

You don't have to answer, he told us.

As the train disappeared, the cop finished talking, I nodded and he sped off. I resumed a conversation from earlier with friends and forgot to spend a lot of time feeling bad about racing the train. But I did notice the police car round a corner a few blocks down. And from a distance the lights and siren on top were sort of pretty.