"An American Story" by Debra Dickerson

The passionate, category-defying journalist levels her tough gaze on her own journey from the ghetto to Harvard Law School and beyond. 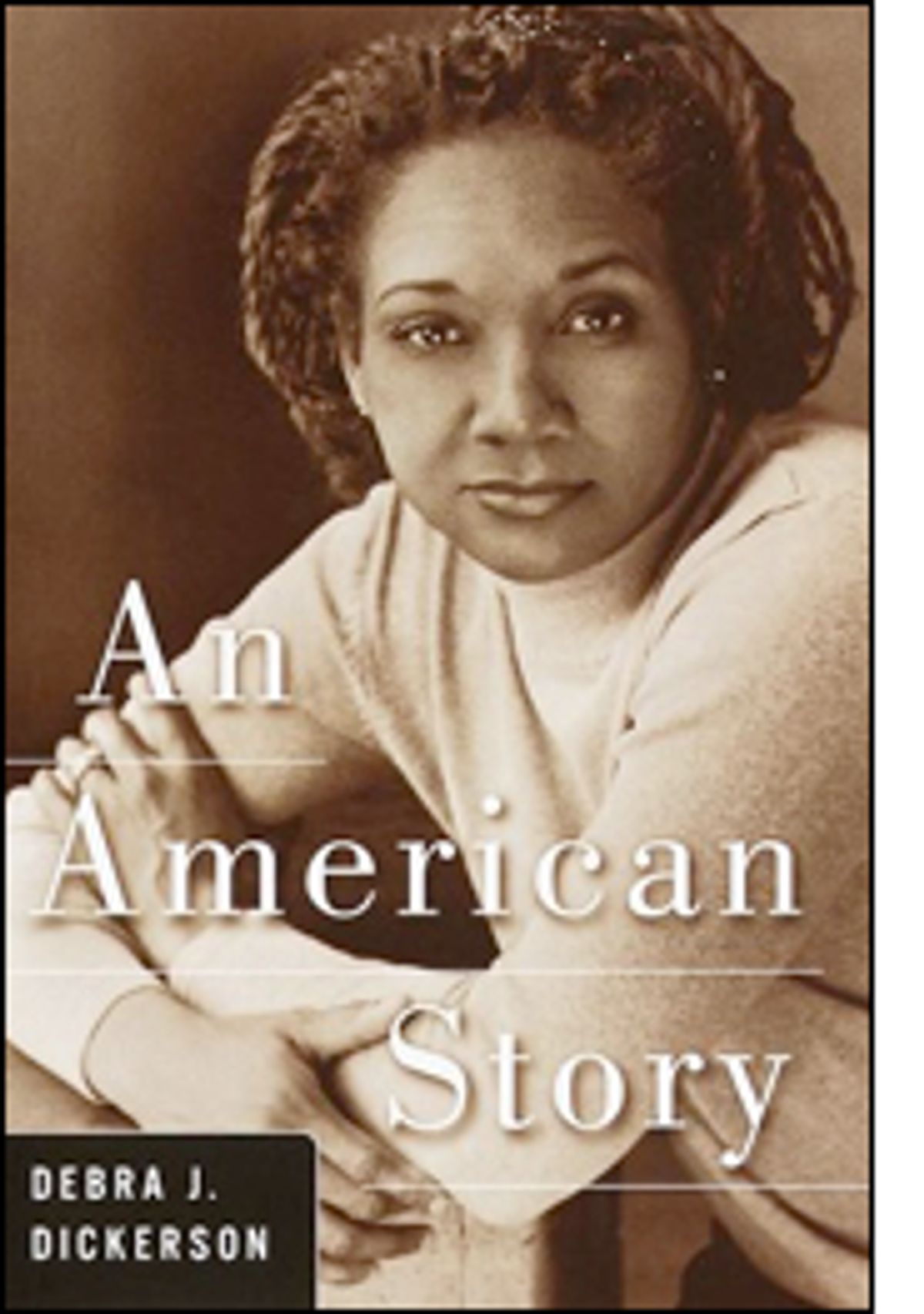 Almost no one is exempt from Debra Dickerson's scrutiny: not Democrats or Republicans; not African-Americans, leftists or gun-toting homeboys. As a journalist, she has exposed the contradictions and inconsistencies of these groups and many more in the New Republic, U.S. News & World Report, Salon and other publications.

Now in her memoir, "An American Story," Dickerson dissects the people she grew up with and met during her years as an Air Force officer, as a volunteer with the Democratic National Committee and as a Harvard law student. But much of the appeal of "An American Story"' is that Dickerson levels an equally tough gaze on her own ideas and choices.

As an adolescent in St. Louis' ghetto in the 1970s, Dickerson could have been a right-wing poster girl. Black, smart and articulate, the daughter of former sharecroppers, she believed poverty was a choice. To succeed, everyone just needed to work hard -- like her. On a visit to a welfare office with her mother, she scoffed at the unwed mothers, corrected the English of the social workers and refused to sit in the "germ-ridden chairs."

But nothing in Dickerson's memoir, or her life, is static -- least of all her politics. In less than 40 years, she moves from being passionately right wing to left wing to somewhere in between. She's not a dilettante, but an eager student, hungry to uncover nuances and hypocrisies, even after she has fallen in love with an idea or group of people.

This relentless inquisitiveness makes Dickerson a complicated character. So does her amalgam of anger, insecurity and ambition, which, as Dickerson explains, was fueled by her family as well as by race and class. As a girl, she devoured writings by Maya Angelou, Dickens and C.S. Lewis, and earned A's in a school for gifted students, but still internalized the limited expectations of her family and her community. Her father, a former Marine and ruthless disciplinarian, suggested she'd be better suited for waitressing than lawyering. And school counselors did nothing to dispel that notion: They never suggested that a bright student shouldn't spend half of her days in vocational-tech class, polishing her typing and shorthand. And they never mentioned college to her; she received a PSAT application only by accident.

Excelling on the exam wasn't enough, however, to convince her she was college material. She dodged letters and calls from the admission officers at Duke, Washington University and Bryn Mawr. "I wouldn't last a week at a university before I'd be found out as the unworthy upstart I was and thrown out ... So what if I got good grades? I was blue collar. No one had to tell me I couldn't go to college because I was poor and black. I told myself." Her mother, glowing with pride, also viewed the letters as "lovely non sequiturs" and stuffed them in a small drawer. From the start, Dickerson was her own evidence that hard work, in fact, isn't always enough.

In the Air Force, the potential for a different life dangled in front of her -- white music, white friends, tangible rewards for hard work and middle-class security, which is why she was mortified by reminders of the life she tried to leave behind. When a black airman mangled his verbs, Dickerson writes, "all I saw was the sharecropper speech patterns. All I saw was the gold teeth."

Ideas like these get repetitive in "An American Story" and Dickerson has an unfortunate tendency to interrupt narrative streams with analytical quips. She's most powerful when she lets her stories, particularly those about her family, speak for themselves. For most of her life, for example, Dickerson was dismissive of her brother, labeling him and his friends as stereotypically failed black men. She's well into adulthood before she unravels the more complicated story: her brother's relationship with their father, the abuse he received from neighborhood thugs, his troubles at school. And as she understands the nuances, she feels less threatened by her roots: Her brother becomes her "race consultant," teaching the strait-laced Dickerson a language and a style that she once shunned.

Through her reconciliation with her brother, her feelings of racial isolation and other events, Dickerson gravitates, emotionally and politically, toward the ghetto again. By the time she becomes a lawyer (and a Democrat), it's in part to connect with the black community, this time by helping change it. Even still, Dickerson defies categorizing. She may be a liberal African-American but she won't shrink from challenging the stances of Harvard's Black Law Students' Association, which she calls "a fashion show, a politburo meeting, a hotbed of revolution, a social club, a refuge from the white world we'd chosen."

But despite her boldness, Dickerson is oddly withholding about some aspects of her personal life. She mentions boyfriends long enough to tell us that they are white -- piquing our interest for her take on interracial relationships -- but then drops the subject completely. On one hand, a memoir written by a woman that doesn't focus on the agonies and obsessions of love is refreshing. Yet if the rest of her life is any indication, Dickerson's views on relationships are probably unpredictable, and would have added to the book. You may not like her opinions or the way she expresses them, but it's hard not to admire Dickerson's determination and her relentless passion for teasing ideas apart and then putting them back together in her own, atypical way.