It sounds like science fiction, but the stimulation of an electrified paddle may be enough to end your blues. 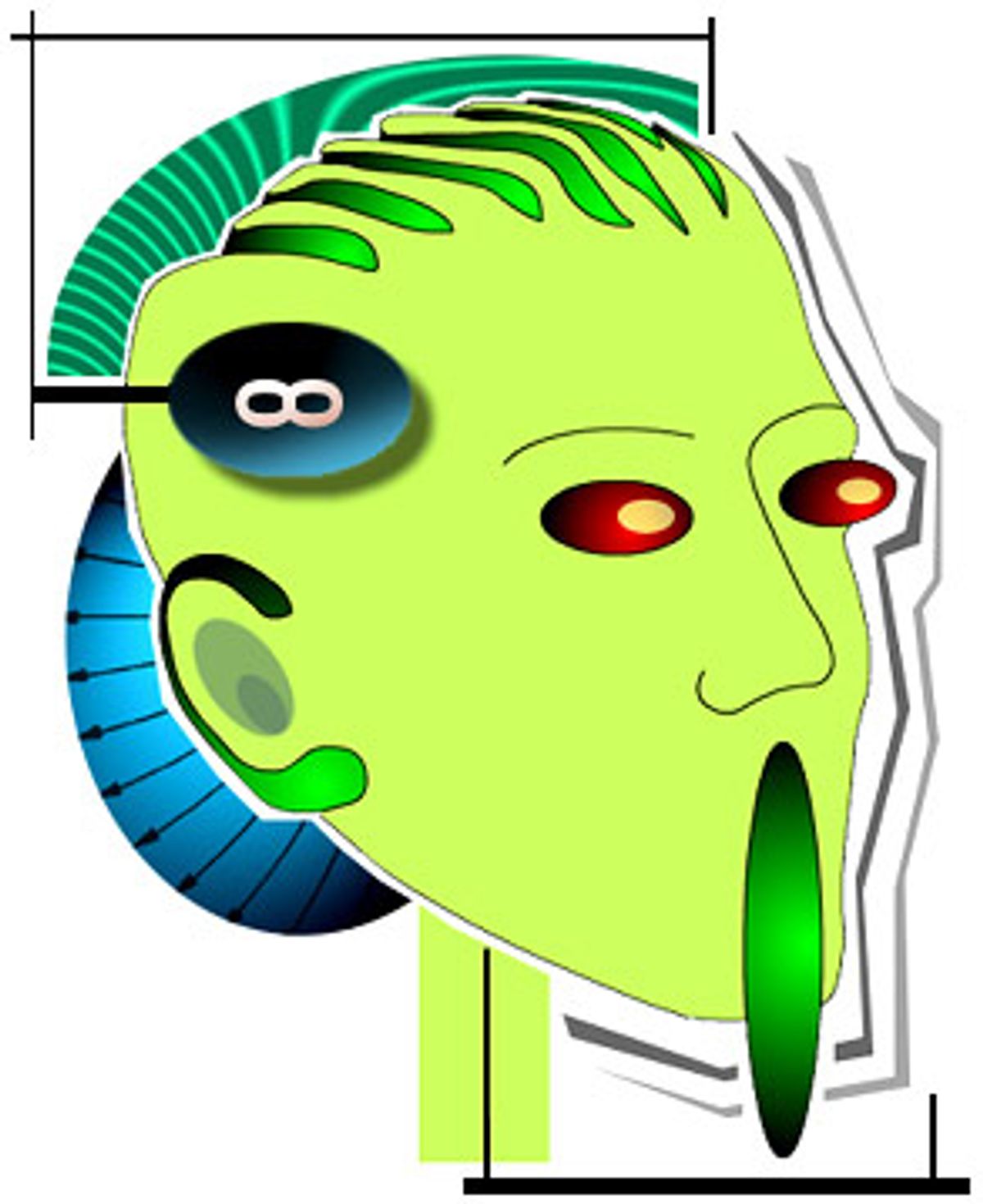 It seems a bit spooky, even kooky, the way the doctor waves the magnetic paddle over the patient's head -- like something from a science fiction movie or a 19th century laboratory where wax-mustached phrenologists measured heads with calipers. But it also seems to work: Psychiatrists at Yale are using rubber paddles containing figure-eight-shaped electrical coils to effectively treat schizophrenia. Elsewhere, the paddles are being deployed, experimentally, against epilepsy, depression and other diseases of the head. The paddles are the instruments of a new treatment called transcranial magnetic stimulation.

On a recent afternoon at Columbia University's renowned College of Physicians and Surgeons, Dr. Holly Lisanby, assistant professor of clinical psychiatry, demonstrates the technique. The paddle is connected to a power source and a computer. When electrical current surges through the coil, it generates a magnetic field. Lisanby holds the paddle directly above the left temple of an imaginary person seated in an old dentist's chair in the center of the room. A flashing window on the laptop displays the disconcerting words "Armed Mode." Lisanby hits a key on her laptop. There's a loud rat-a-tat, like the sound of a staple gun, and then the device falls silent. "Most people describe the sensation as a kind of tapping on the head, like a woodpecker," says Lisanby. The demonstration over, the imaginary patient is presumably on his or her way to feeling better.

If transcranial magnetic stimulation, or TMS, emerges with good results from several studies being conducted by Lisanby and others around the country, the little paddle Lisanby wields could represent a breakthrough in the treatment of depression and other intractable conditions. TMS could be "the neuropsychiatric tool of the 21st century," one physician says. But as even the most ardent proponents of TMS admit, that's a big if.

Electromagnetism has been harnessed in everything from kitchen appliances to the space shuttle. It has also been employed -- unsuccessfully -- at different periods in medicine's colorful and at times dark past. In 18th century, pre-revolutionary France, the craze for all things scientific led to the discovery of so-called animal magnetism and launched the fad of mesmerism, a kind of hypnotherapy. Invalids of every description flocked to healers with mesmeric tubs or linked hands with each other to form human electrical circuits. In the late 19th century, medical fascination with invisible energies resurfaced in experiments with magnetotherapy. Jean-Martin Charcot, the eminent nerve doctor, staged public demonstrations in which he claimed to move hysterical symptoms across the surface of the patient's body with the aid of a magnetic coil. However bizarre, these experiments did have the virtue of fueling interest in hypnosis, and led indirectly to Sigmund Freud's discovery of the talking cure.

In the 1930s, electricity was harnessed in a brutal form in shock treatment, which induced seizures in patients. Electroconvulsive or electroshock therapy, as it was known, became a staple of the psychiatric arsenal for decades before falling out of favor -- only to be revived in recent decades, in a safer form, to treat depression. In the meantime, popular interest in magnetism seems once again to have peaked, albeit in contradictory ways -- ranging from self-proclaimed magnetic healers to technology critics who warn of the ill effects of the force fields emanating from cellphones and electric power lines.

It is against this backdrop of dubious science and medical dead ends that researchers have staked their claim for TMS. Despite the treatment's unorthodox appearance, its proponents are not exactly tilting at windmills. TMS has become one of the hottest fields in psychiatric medicine, part of the revolutionary change in the field brought about by new insights into the functioning of the brain.

The basic science behind TMS is simple. Magnetic fields, unlike electrical current, pass easily through the human skull, without being deflected by bone. Researchers can thus wield magnetism with greater precision and in much smaller doses than electrical current. Instead of being zapped into a convulsive state, the patient's brain is mildly "tickled." Exactly what happens inside the brain is only imperfectly understood, but the magnetic field seems to induce electrical current in areas of the brain -- particularly the left and right prefrontal cortices -- that are associated with mood disorders. Mysteriously, the current can stimulate or disrupt cortical activity depending on which side of the brain gets zapped. Stimulating the right side causes happiness, while stimulating the left causes sadness, says Mark George, one of Lisanby's colleagues.

While researchers are still attempting to show how and with which patients TMS works, they are encouraged by the fact that it seems to have few side effects beyond mild headache. That sets it apart from electroshock therapy, which more than 50,000 people receive each year and which works by inducing seizures. While a seizure may shake a patient out of depression, it can also produce amnesia and tangled thoughts.

The discovery of TMS's curative powers represents an outgrowth of two decades of research dedicated to pinpointing the relations between brain function and brain location. At Lisanby's Magnetic Stimulation Lab, TMS is used in combination with techniques like magnetic resonance imaging and positron emission tomography to map brain function by creating temporary brain lesions and matching the physical changes to behavioral ones.

The therapeutic potential of TMS rests on a central insight of the new brain science: "plasticity," the idea that the brain has the capacity to reorganize itself in response to new stimuli, or to lost or impaired functions. "I was taught," Lisanby tells me, "that once you lose a neuron in the brain, that's it." But many recent studies have shown that neurons can regenerate. The discovery that the brain is a far more malleable organ than was once supposed has opened all sorts of new therapeutic vistas where once there had seemed to be only darkness. The premise behind TMS is that a small jolt can essentially "reset" the brain by stimulating its capacity for reorganization. These jolts can change the function of neurotransmitters, stimulate new synaptic connections or recruit new areas of the brain to compensate for lost functions.

If a depressed state of mind equates with sluggish brain circuitry, so the thinking goes, then injecting a small dose of energy into it could bring the circuits flickering back to life. A session with the paddle may be just what doctors of the future order.

That said, transcranial magnetic stimulation has far to go before it can be offered as a safe, effective treatment for psychiatric ills. Studies in the mid-1990s showed great promise but haven't been easily replicated, causing proponents to back away from some of their more sweeping claims about the treatment's benefits. Current research focuses on trying to pinpoint TMS's effects with greater precision. Lisanby has just completed a study examining the effects of combining TMS with the antidepressant drug Zoloft. Zoloft typically takes up to six weeks to take effect, while TMS is faster acting but provides only short-term results. The purpose of the study, whose results are currently being analyzed, is to see whether TMS can be used to kick-start Zoloft's therapeutic effects.

Other researchers are trying to set the parameters for the use of TMS, examining how much electricity should be sent through the coil, the optimal duration of the dose and where on the head the coil should be placed. Dr. Alvaro Pascuale-Leone, a neurologist and director of the TMS lab at Boston's Beth Israel Hospital, is finishing a three-year, National Institutes of Health-sponsored study focused on tailoring TMS to the needs of individual patients, an advantage TMS may end up having over pills. More than 50 percent of Pascuale-Leone's patients have responded with better than 50 percent improvement on the Hamilton Scale, a measure of depression. In the world of severe, treatment-resistant depression, those are great numbers. In the March 25 issue of the Lancet, investigators at Yale School of Medicine reported that TMS had reduced auditory hallucinations suffered by a majority of schizophrenics participating in a study there. Some of the patients became symptom-free, according to the researchers.

The search for better treatments has also led some researchers to consider using TMS in quite different ways than originally intended. One method involves using magnetism at frequencies high enough to induce seizure. The effects of the method, known as magnetic seizure therapy, are believed to be milder and more easily controllable than those of electroshock therapy. But some researchers are wary of using TMS to induce any seizures at all -- the avoidance of potentially damaging seizures being a prime reason for using TMS in the first place. "All of us in this field worry about seizures," says Pascuale-Leone. To be sure, he says, shock therapy has its place, and many of its ill effects have been eliminated through improvements in anesthesia and electrode placement. Still, Pascuale-Leone believes, seizure therapy is overkill: "If you think of depression as a fly on the wall, then ECT [electroconvulsive therapy] can be compared to a bazooka and TMS to a BB gun."

Skeptics, on the other hand, doubt that TMS can work at all unless it causes seizures. Max Fink, a physician at Long Island Jewish Medical Center and a senior figure in shock therapy research, believes TMS can be attributed to the placebo effect. In his field, it is axiomatic that treatment does not occur without seizure. Fink believes TMS proponents have yet to show it works.

TMS researchers acknowledge it will be difficult to convince skeptics, especially given the superficial resemblance of TMS to the faddish magnetotherapy. (In fact, explains George, who studies TMS at the Medical University of South Carolina, "most if not all of the biological effects of TMS are due to the induced electrical currents and not the magnetic fields, which, although powerful, are very brief.")

Should the public be optimistic or skeptical about TMS? Though early studies of the procedure generated a great deal of excitement, a recent paper coauthored by Lisanby and George ends cautiously, saying that it's too early to know whether we are at the threshold of a new era of noninvasive, nonchemical treatment. Still, Pascuale-Leone is convinced that once researchers figure out the best way to use TMS, it "will have a role in the neuropsychiatric armamentarium."

The day may yet come when people slip off at lunch for a quick burst of electromagnetism to get their brain current flowing in the right direction. In the meantime, it seems prudent to heed the words of the anonymous 19th century skeptic who said, "Beware of an optimist wielding a stimulating coil."