Milosevic goes into hiding after hundreds of thousands of outraged Serbs seize Parliament and the state-run media. A report from the Battle for Belgrade. 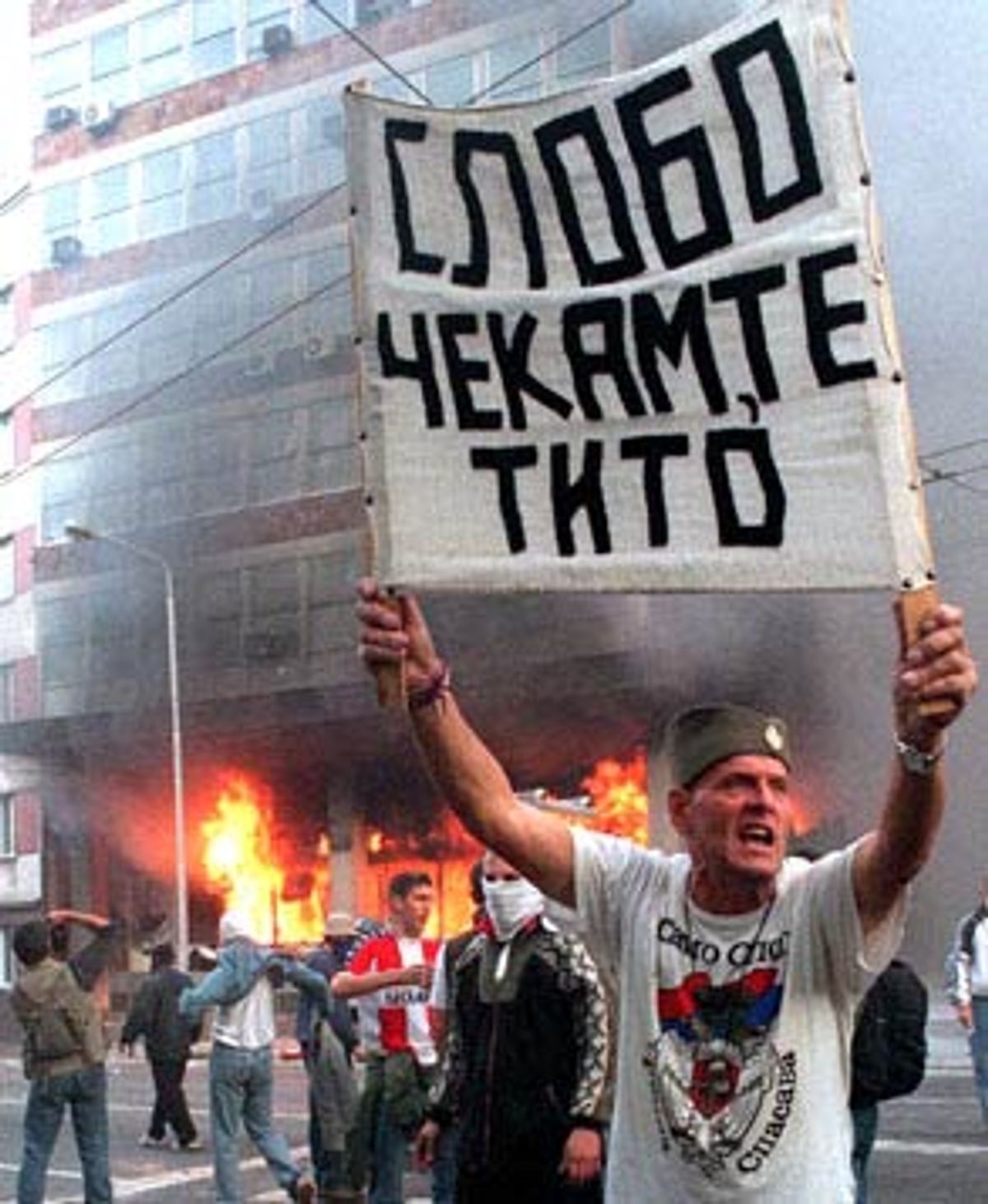 Less than two weeks after he was voted out of office, the government of President Slobodan Milosevic appeared to have made its last stand Thursday night as hundreds of thousands of protesters stormed the streets of the capital, violently demanding his ouster.

Just hours after Belgrade citizens waged a day-long battle with police to take control of the Parliament building and a key government television station, the official government media was addressing opposition leader Vojislav Kostunica as the country's "president-elect."

With the nation's police and army in disarray, protesters swarming the streets and the opposition firmly in control of television, Milosevic must be looking for a way out. Indeed, news reports of the suspicious departure of three military planes Thursday evening fueled speculation that Milosevic might be trying to flee the country.

Serbia's opposition had scheduled a massive rally Thursday afternoon that was billed as the "final push to oust Yugoslav President Slobodan Milosevic." And that rally now appears to have turned into just that.

A day earlier, Yugoslavia's Constitutional Court, controlled by Milosevic loyalists, issued a statement claiming it had annulled "parts" of the election, and later a judge serving on the court told Radio Free Europe that the decision effectively nullified the results of the election and would permit Milosevic to remain in office until his term expires in July.

Milosevic lost decisively in Sept. 24 elections, but has so far refused to concede his defeat to opposition leader Kostunica despite mounting evidence of electoral fraud. The Milosevic government insisted on a runoff election, but the opposition claimed it had won an absolute majority, over 50 percent, and a runoff was therefore unnecessary. The Milosevic government repeatedly refused demands for a recount or international mediation.

But the vast majority of Yugoslavs didn't buy the court ruling, and instead interpreted the technical legal maneuvers as an attempt by Milosevic to cling to power. People from every corner of Serbia turned out in droves Thursday to stop that effort.

By the time the protests were mounted, Milosevic's support had eroded so badly that his own government-controlled media was turning against him, and his security forces seemed helpless to fight the incessant throngs that stormed police blockades across Serbia.

In villages like Majdan and Ljiga, located an hour's drive from Belgrade, protesters overturned police vehicles with virtually no resistance.

But the most dramatic scenes were reserved for Belgrade, where a rally staged by the opposition was bursting with tension after only 30 minutes. A series of speakers proclaimed the beginning of democracy, vowing to "take what is ours."

Bogoljub Arsenijevic "Maki," an outlaw artist with militant political views, riled up the crowd with a revolutionary speech. "Belgrade will fall today," he told a euphoric audience from a makeshift stage.

The masses cheered, "Victory!" and "He's finished!" as other opposition leaders addressed the crowd.

Belgrade's new mayor, Milan Protic, a former history professor at the University of California at Santa Barbara, told the crowd, "Tonight it's over in Serbia. Everything around us is ours. Every hole they're hiding in is ours!"

The crowd inched forward, gradually pushing the police cordon back a few yards.

One hundred lightly armed police officers stood between the Parliament building and hundreds of thousands of angry citizens.

A half-hour into the demonstration, a small group of journalists, including this writer, stormed the police line in order to get a better view of the crowd. We had intended to get a good view from the steps of Parliament, but a demonstrator shouted, "What are we waiting for? Let's go!" Thousands surged up the steps. A melee ensued, but the police showed no signs of resistance. They appeared simply flabbergasted by the events swirling around them.

Police soon withdrew inside the Parliament building, and fired dozens of volleys of tear gas into the crowd. Opposition supporters fought back, tossing tear gas canisters back into the building. Hundreds choked and vomited on the pavement, thousands more lay incapacitated in the park across the street.

But soon the protesters returned, angrier than before, desperate to storm the building. Such scenes were repeated several times, but then came the farmers.

A bunch of villagers on a tractor reenergized the crowd with their attempt to drive up the Parliament steps and smash through the front doors. When the villagers discovered that the steps were too steep, the battered yellow tractor then simply began ramming the building itself.

Dozens of teenagers climbed through the windows in the south wing and encouraged the crowd to continue their fight.

"No retreat," the crowd chanted, all the while screaming in agony from the wafting tear gas that stung their eyes. The crowd seemed propelled by a suicidal sense that the agony wrought by Milosevic had to end now, and thousands seemed ready to make a sacrifice.

One man fell over with an apparent heart attack; another went into seizures. One man took a blow to the head from an uprooted lamppost; countless others were struck by rubber bullets. Wave after wave of ambulances arrived continually to pull out the wounded. Two people were killed and 65 injured in the rioting, according to Tanjug, a government news agency now controlled by the opposition.

Hundreds stormed side entrances of the Parliament and eventually lit fires inside the building to drive out police. Several police and state vehicles were flipped upside down and burned.

All the while, a rave party was underway in front of the National Bank on Boulevard Revolution, a mere 100 yards from Parliament.

Branko Ilic, a key organizer of the Otpor, or "Resistance," student movement, stood on a makeshift stage where a wall of speakers blasted dance music. The black smoke of the burning Parliament building mixed with white tear gas to set a dramatic backdrop to the dance scene. While some danced, others fought.

The dozens of police inside Parliament gave up after battling for less than an hour. Protesters soon emerged with their war booty: blue helmets, police shields, bulletproof vests and a tear gas gun.

One man emerged with an antique coat rack. "This will look fantastic in my hallway," he proclaimed in a postmodern mixing of rioting and decorating.

The crowd pummeled a number of police and even lit fire to some, but none were reported killed.

By nightfall, a party atmosphere descended upon Belgrade, especially in front of Parliament, where revelers carried out furniture and anything else useful they could find.

After Parliament fell, hundreds of special police units launched a counterattack from nearby Tashmajden Park, but again the crowds fought back, hurling bricks and stones at police.

Milosevic's security forces appeared spread thin as countless demonstrations erupted across the country. The police showed repeatedly that they no longer had it in them to fight back.

In some instances, the protesters showed goodwill toward the police. One officer was nearly killed by an angry mob, but his life was spared after a good Samaritan talked sense into the crowd. "What will this gain us? He's just another poor victim of this regime, like the rest of us," the man said.

Protesters then focused their attention on the much-hated Radio Television Serbia, which has served as Milosevic's primary propaganda vehicle for 13 years. Thousands converged on the station, which is located only a few hundred yards from Parliament.

The police holed up inside RTS put up a strong resistance, pummeling the crowd with tear gas and rubber bullets. But, as they had done at the Parliament building, protesters set fires to drive the police out of RTS.

Young men tossed Molotov cocktails into the building, then hid behind other buildings as police fired a burst of rubber bullets at exposed protesters.

One man fell unconscious when a rubber bullet struck his head. Citizens rushed in to pull him out of the line of fire, and delivered him to a nearby ambulance.

Another was struck by a massive electricity pole that came loose from leaning protesters. One man died when he was crushed by the same tractor used earlier in the day to take the Parliament.

Police launched volley after volley of tear gas at the growing crowd in front of RTS, but some protesters had already secured police gas masks from their previous confrontations. Still others wore makeshift masks created from the tablecloths of a ransacked restaurant.

The battered yellow tractor that had become a symbol of the fall of the Parliament building made a second appearance, charging the television station. But the farmer steering the tractor was temporarily driven back by a hail of rubber bullets.

Again and again the crowd charged the front doors of the state media. As hundreds retreated from tear gas exposure, thousands of replacements arrived. Finally, some anonymous soul issued the final charge order. Thousands of protesters launched a final attack and poured into the television station courtyard. The building was well in flames by then, and police were simply daunted by the sheer number of people storming the television station.

The next attack came from the rear of the RTS building. Only this time, police fired live bullets on occasion, shooting one man in the stomach. Countless more were struck by rubber bullets, and hundreds suffered massive tear gas exposure.

But the rowdy throng refused to be deterred, and hurled a storm of rocks through the windows where police hid.

More cars were set on fire, and one man played demolition derby in the television parking lot. Cars occasionally exploded below the windows where police made their last stand.

After one hour, the police gave up. A dozen officers emerged from a side door with a handful of RTS employees. They were jeered and taunted, occasionally swatted, but no one was injured.

Around the corner, dozens of police simply surrendered. Apart from an occasional bully, the crowed embraced the officers and chanted, "The blue are ours!" referring to the color of the police uniforms.

"I was only out here to protect myself. I hope it's over!" one officer reflected, standing under a waft of smoke.

Alex Todorovic is a Belgrade writer.